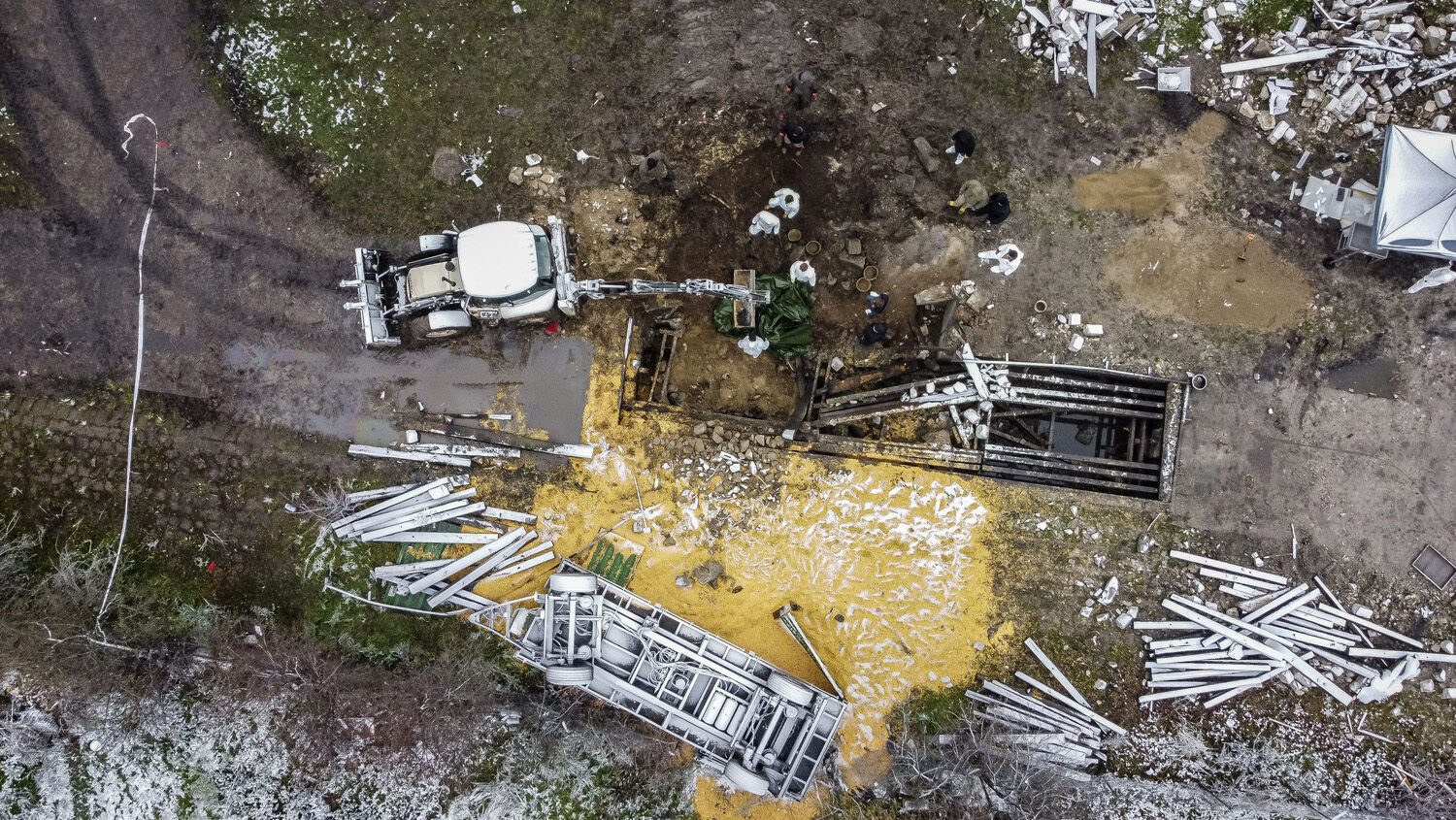 Aerial view taken on November 17 shows the site where a missile strike killed two men in the eastern Poland village of Przewodow, near the border with war-ravaged Ukraine.
WOJTEK RADWANSKI,DAMIEN SIMONART/AFP via Getty Images

And one man prophesied it.

When missiles landed in Poland on November 15, the Ukraine war entered a new phase. Ukrainian President Volodymyr Zelenskyy still says the missiles were Russian; most others say they were misfired Ukrainian air defense missiles. Regardless of their origin, the situation shows how quickly a neighboring nation could be drawn into war and how important it is to be prepared. Furthermore, it’s astonishing to consider who Poland turned to when World War iii was on everyone’s mind: Germany.

Poland and Germany have had many disputes recently about Poland not following European Union laws. Poland has even demanded reparations for World War ii. But in a moment of crisis, the two nations quickly bonded.

Germany almost immediately offered Poland help in securing its airspace. “As early as tomorrow” German Eurofighters could be deployed, a Defense Ministry spokesman promised. These fighter jets could police Poland’s skies while remaining stationed in Germany. Less than a week later, Germany and Poland agreed that Berlin would send its “Patriot antiaircraft systems to Poland and support the securing of Polish airspace with Eurofighter [jets],” Defense Minister Christine Lambrecht announced in a statement. “Poland is our friend, ally and particularly exposed as Ukraine’s neighbor,” Lambrecht noted.

The Patriot system is a ground-based short-range air defense missile system that is mounted on a truck. It can defend against aircraft, cruise missiles and tactical medium-range ballistic missiles, which it automatically detects. It is equipped with four or eight guided missiles, and according to the Bundeswehr, it is one of the most advanced air defense systems in the world. Its command post has complete protection against nuclear, biological and chemical warfare agents.

This extension of Germany’s military arm could quickly become permanent. Germany has sent the same Patriot antiaircraft units to Slovakia, where it intends to keep them “until the end of 2023 and potentially even beyond,” Lambrecht told the Rheinische Post. The Bundeswehr is leading the North Atlantic Treaty Organization’s enhanced Vigilance Activities (eVA) in Slovakia.

Germany is increasingly responsible for the safety of its eastern neighbors.

Poland has a goal to become one of Europe’s and the world’s most well-equipped militaries—but it needs Germany’s help. On March 3, Poland announced its plan to spend 3 percent of its gross domestic product on defense by next year. Last year, it announced it would double the number of people serving in its military. In 2019, it announced its intention to join the European Main Battle Tank project led by Germany and France. Jarosław Kaczyński, leader of Poland’s ruling Law and Justice party, said in 2017 that he would welcome a European nuclear superpower but doubted the EU would approve the necessary finances.

The recent signs of solidarity between Germany and Poland are especially remarkable if you consider that Germany, like Russia, has historically invaded Poland. Over the course of World War ii, the Polish population was reduced by almost 18 percent. The whole of Eastern Europe and France experienced a similar fate. But today, these same nations are cooperating with Germany. Europe is trusting in the war machine that previously caused the greatest suffering ever on the Continent.

This trust in Germany will soon lead to reliance. Reliance will lead to submission.

Just a few decades ago, Poland was still behind the iron curtain. But Germany and Poland’s developing alliance was predicted long before Poland was freed from Russia’s boot. On Aug. 27, 1980, late educator Herbert W. Armstrong reiterated his decade-long prediction, writing: “Will Poland free itself from Soviet domination and join with Yugoslavia, Romania and possibly Czechoslovakia—and with Germany, Italy, France, Spain, Portugal and Austria—in a resurrected medieval ‘Holy Roman Empire’ to dominate Europe and equal the ussr and the U.S.A. in world power?”

The world at large is paying little attention to this trend—and yet Europe’s military unification has deep prophetic significance. Revelation 17:12-13 warn: “And the ten horns which thou sawest are ten kings, which have received no kingdom as yet; but receive power as kings one hour with the beast. These have one mind, and shall give their power and strength unto the beast.” This prophecy refers to 10 leaders who head 10 nations or groups of nations. All of these leaders are giving their national power to one great empire (or beast) led by one overarching leader. In Who or What Is the Prophetic Beast?, Mr. Armstrong thoroughly explained this prophecy and urged readers to take the Bible’s warning seriously—signs are all around us that the fulfillment of these prophecies is around the corner.

In his Jan. 23, 1980, co-worker letter, Mr. Armstrong specifically foretold that fear of Russia would kickstart Europe’s religious-military unification: “What Russia is doing will be the spark to bring the heads of nations in Europe together with the Vatican to form a ‘United Nations of Europe.’”

In 2014, shortly after Russia annexed Crimea, Trumpet editor in chief Gerald Flurry warned in “The Crimean Crisis Is Reshaping Europe!”:

When Germany invaded Poland on Sept. 1, 1939, Adolf Hitler was pursuing a plan to subjugate Europe to then conquer the rest of the world. Today, Germany already rules a united Europe that is becoming a military power. You can read more about this trend in “Europe’s Push Toward a Unified Military.”

The Bible’s prophecies, however, do have a hope-filled conclusion. Revelation 17 concludes with Jesus Christ’s return to Earth and the establishment of everlasting peace. The very events that we see all around us are leading to the fulfillment of this most wonderful promise. The empires rising today are prophesied to be the last world-ruling empires before God’s intervention.