It’s much deeper than a mere political problem. 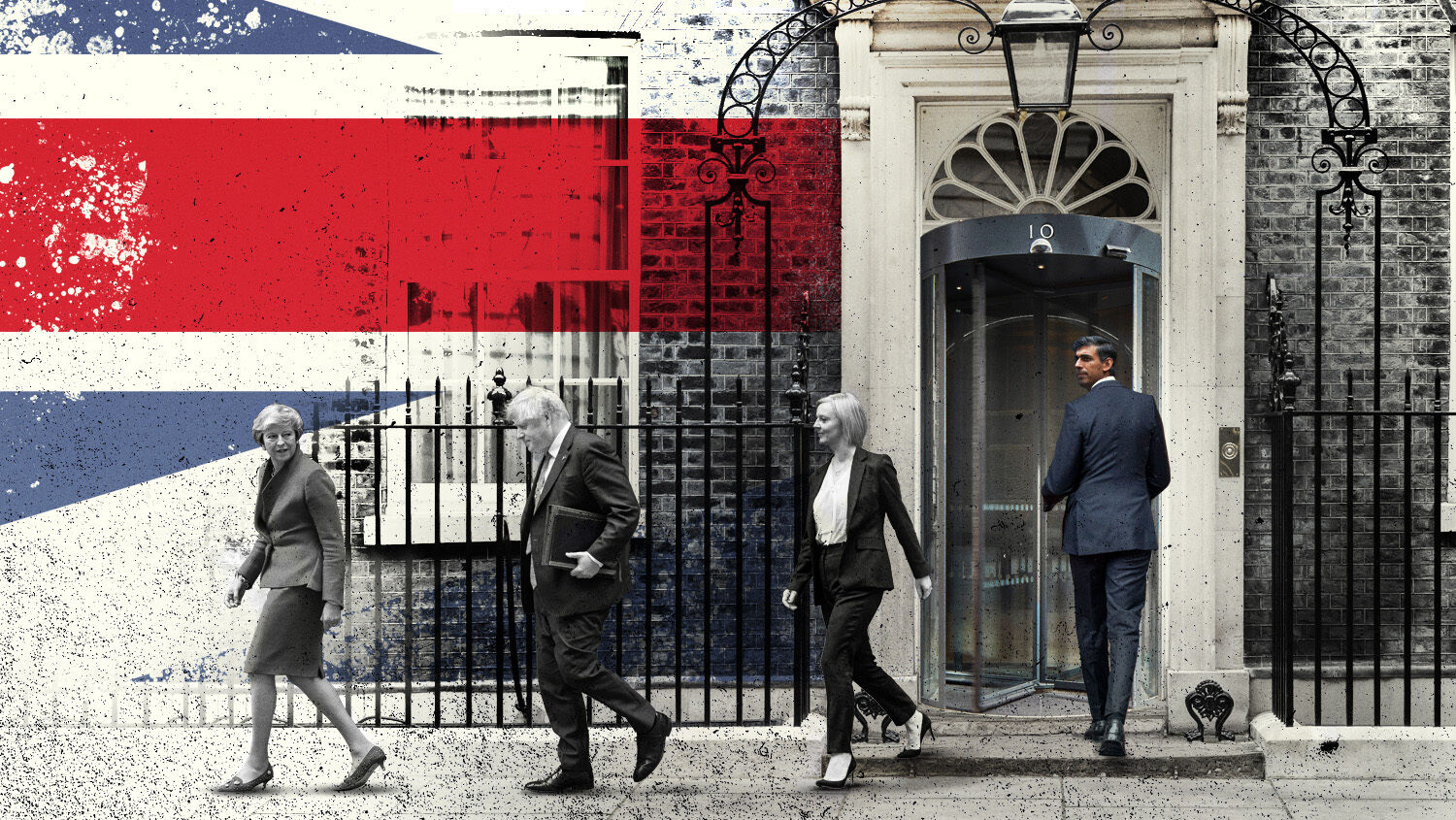 It’s much deeper than a mere political problem.

Has there been a more farcical period of British history?

On October 25, Rishi Sunak became Britain’s third prime minister in 2022. Boris Johnson was booted out at the start of the summer for holding boozy parties at Downing Street after he’d put the entire country under house arrest.

The ruling Conservative Party spent 62 days choosing a new leader. But Liz Truss lasted only 44 days—smashing all records for the shortest-running prime minister.

There’s a real sense of chaos in the United Kingdom. Inflation is at a 40-year high, at over 10 percent. Rising interest rates risk making housing unaffordable for the 1 million on variable rate mortgages. Fuel prices are still high—the average petrol price is £1.82 per liter, or us$7.77 per gallon. And the government is borrowing untold billions to help families and businesses afford to keep the lights on and buildings warm this winter.

Around 2 percent of Albania’s adult male population have joined the tens of thousands crossing the English Channel in small boats. The government is now spending £2.5 billion ($2.9 billion) a year to put them up in hotels, while police fear a crime wave fueled by Albanian drug gangs.

To add insult to injury, a small group of radical protesters shuts down major highways on a daily basis. The police are too timid to stop them, so half a dozen people regularly cause disruption to thousands.

Spiked writer Brendan O’Neill wrote that Truss’s tenure, which is the shortest in the 301-year history of the office, “deserves to live in ignominy. Not necessarily because her blunders were so spectacular—though many of them were—but because of what this strangled-at-birth stint in Downing Street tells us about British politics more broadly. Which is that it’s a wasteland. An ideological void. A dustbowl of ideas. The lack of even the faintest glimmer of leadership material anywhere in the Westminster circus is horrifying to me.”

Why are we in this situation? This nation has produced some fantastic leaders in the past. Where did they go? Why can’t we get anyone competent in charge, and why can no one provide any answers?

The Cause of Our Problems

He was already the first cabinet minister to take his oath of office by swearing on the Bhagavad Gita. This was completely unremarkable. The Bible is so remote from the lives of most Englishmen that no one really cares that it was swapped out for another sacred book.

Yet this is exactly where we must look to understand our problems.

Most believe the Bible is at least a book of good principles or nice ideas. But few delve into the specifics.

This is a shame—because those specifics describe exactly the problems we face.

The Bible tells us that when a nation falls, the problems generally start with leadership. In Isaiah 3:12, God laments, “O my people, your leaders mislead you; they send you down the wrong road” (New Living Translation).

The Bible is full of many principles that can make any nation great or explain the fall of any empire. But for Britain it is even more specific. For years we’ve taught that the biblical tribe of Ephraim refers to Britain in Bible prophecy (read our free book The United States and Britain in Prophecy for more information).

The book of Hosea has a lot to say about modern Ephraim. In biblical language, it analyzes the causes of modern Britain’s dysfunction.

Chapter 5, for example, begins by addressing the “priests” and “house of the king”—the leaders of the nation. It says they are a “snare” and “a net.”

“God is putting the blame where it belongs,” writes Trumpet editor in chief Gerald Flurry in his booklet Hosea—Reaping the Whirlwind. “Who has led the nation of Britain astray? It has been the ministers, rulers and even the royal family. The leaders of the nation have been a snare to the people.”

God singles out the royal family for its lack of leadership. This was a theme of the cover article of last month’s Trumpet issue. In it, Mr. Flurry wrote: “I believe that now that the Queen has died, Britain’s demise will accelerate.” One month later, we’d moved on to a new leader and new set of problems.

So our poor leaders are causing our problems. But why can’t we find any good leaders? Where did they go?

Where Did Our Leaders Go?

A key theme the Bible emphasizes in these passages is cause and effect.

In Hosea 8:7, God says, “For they have sown the wind, and they shall reap the whirlwind ….” God has a lesson for us about cause and effect.

Our leaders are choosing policies that cause our problems.

In the end, “… Ephraim shall receive shame, and Israel shall be ashamed of his own counsel” (Hosea 10:6).

Mr. Flurry writes in his booklet on Hosea: “Britain will soon become ashamed of its ‘craftsmen,’ or experts. Do you really want to rely upon the experts?” covid-19 has already given us a preview of where trust in such “experts” will lead.

But there’s more to it than this. As a society we’re living a way of life that has caused our leadership problems.

Isaiah 3 and Hosea 4 and 5 discuss our leadership crisis. And they highlight our families.

Family has collapsed—and without strong families and strong child rearing, there is no next generation of strong leaders. In fact, the consequences of the destruction of Britain’s families are so devastating, God likens it to child sacrifice (Isaiah 57:5; Hosea 4:13-14).

Isaiah 3 discusses upside-down families—where women and children lead. The idea that the man should be the head of his family is outdated. But the lack of national leadership that we see in the world is a direct result of the lack of male leadership in the home.

Both passages also discuss “sin”—another outdated concept. But our refusal to obey God has led to our leadership crisis.

But there’s another critical cause of our leadership crisis: God.

Isaiah 3 starts by saying: “For, behold, the Lord, the Lord of hosts, doth take away ….” God says, “Behold”—He emphasizes who is the one taking away. He is also ensuring that we don’t have strong leaders today.

God said He will take away all the capable leaders: the military generals, the “eloquent orator,” or skilled politicians, are all gone. Instead, God said, “I will give children to be their princes, and babes shall rule over them” (verse 4).

People are desperate for somebody—anybody—to be a leader. We’re at a time when “a man shall take hold of his brother of the house of his father, saying, Thou hast clothing, be thou our ruler, and let this ruin be under thy hand” (verse 6).

“Such will be the want of men of wealth and ability, that they will ‘take hold of’ … the first man whom they meet, having any property, to make him ‘ruler,’” notes the Jamieson, Fausset and Brown Commentary.

This is exactly the situation we find ourselves in.

But why would a loving God do this?

Isaiah 2:22 gives us the answer: “Cease ye from man, whose breath is in his nostrils: for wherein is he to be accounted of?”

“Man is the cause of our problems today,” Mr. Flurry writes in Isaiah’s End-Time Vision.

We cannot solve our problems. The issues that confront us—getting on with other nations, managing an economy, dealing with poverty, raising and selecting leaders—are all spiritual in nature. They’re all problems that man, by himself, cannot solve.

God is adding curses to help us see how much we need Him. “O Israel, thou has destroyed thyself,” God says (Hosea 13:9), but finishes by noting: “but in me is thine help.”

God is going to allow us to keep causing worse problems. He’s going to add more and worse problems on top of that. It is the only way He can get us to stop looking for some new human leader to come in and solve our problems—and instead to look to Him.

God yearns for that time. He’s desperately eager to step in. “I will heal their backsliding, I will love them freely: for mine anger is turned away from him,” God says. “I will be as the dew unto Israel: he shall grow as the lily, and cast forth his roots as Lebanon” (Hosea 14:4-5).

God does not want to see anyone suffer. But once again, it all gets back to cause and effect. He wants us to change from the way of life that causes problems to the way that causes joy. Once we make that change, He is quick to respond.

It will take more pain before Britain will make that change. But God is willing to act in your life now. He does not have to wait for a whole nation to change—He can work with any individual willing to turn to Him.

The United States and Britain in Prophecy
People of the Western world would be stunned—dumbfounded—if they knew! The governments of the United States, Britain, Canada, Australasia, South Africa would set in motion gigantic crash programs—if they knew! They could know! But they don’t! Why?
From The January 2023 Philadelphia Trumpet
View Issue FREE Subscription
Next
Previous