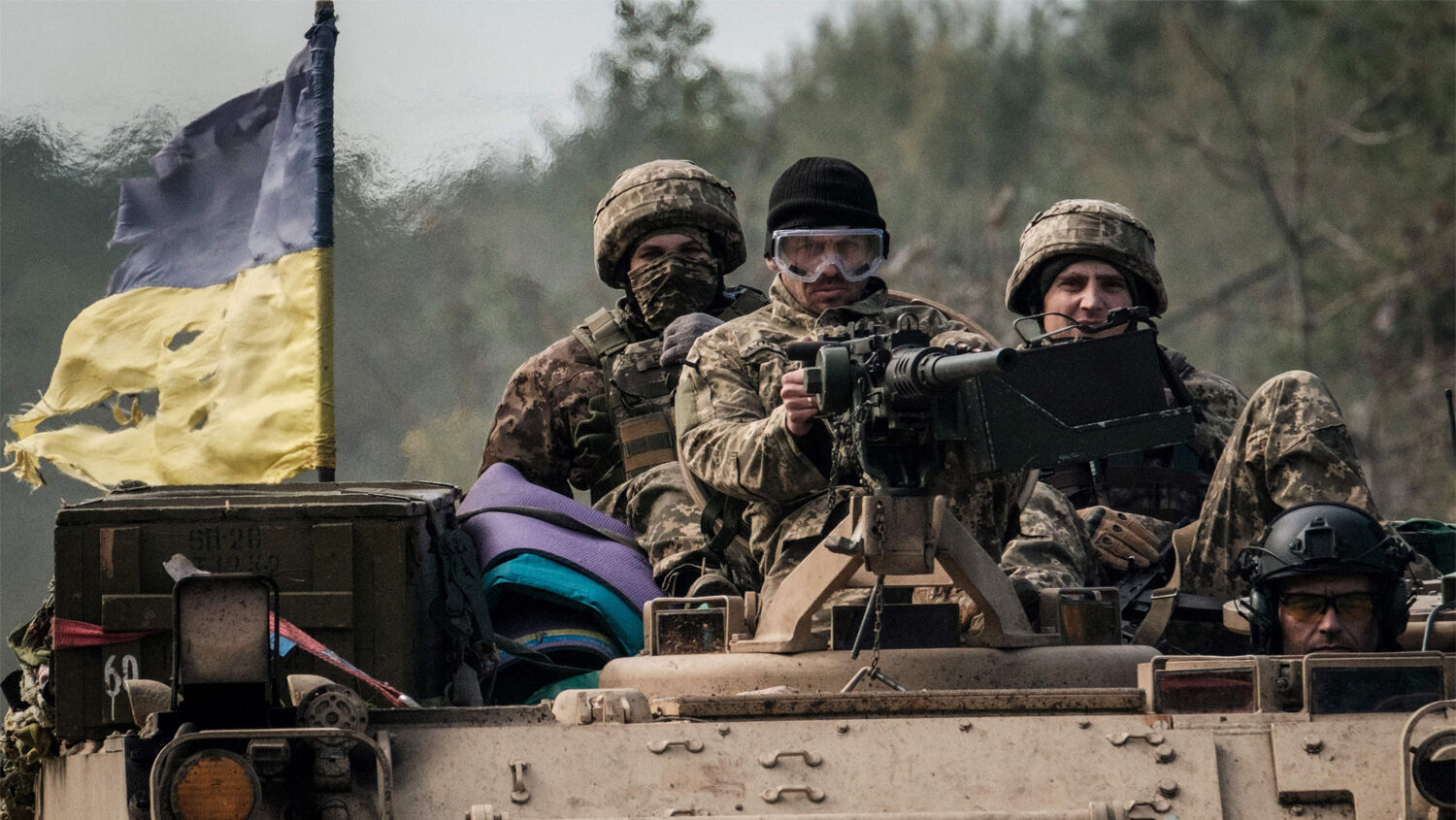 Ukrainian soldiers ride on an armored vehicle near the recently retaken town of Lyman in Donetsk region on October 6.
YASUYOSHI CHIBA/AFP via Getty Images

Prophecy indicates that America does not have the will to win in Eastern Europe.

The brutal war in Ukraine is entering a new phase as Russian President Vladimir Putin targets Ukrainian civilians in a fit of vengeance over his Crimea Bridge being blown up. Around 80,000 Russian soldiers have been killed or wounded since the war started in February, yet Putin is preparing to mobilize 300,000 more soldiers. So Russian resolve to win this war is not lacking, but American resolve may be.

The Quincy Institute reports that 49 percent of likely American voters believe Washington needs to do more diplomatically to help end the war in Ukraine. The same poll finds that 57 percent of likely American voters believe Ukrainians may need to compromise to achieve peace. Republicans in particular are upset with the Biden administration for pledging $70 billion in military aid to Ukraine, while America’s southern border lies unprotected from drug cartels.

So Republican victories in next month’s midterm elections could put a lot of pressure on the Biden administration to bring the Ukraine conflict to an end.

Donald Trump has called for a “peaceful end” to the ongoing war. He has offered to lead a peace delegation to broker a diplomatic solution between Russia and Ukraine in hopes of preventing nuclear war. Hungarian Prime Minister Viktor Orbán has come out in support of Trump’s offer. Speaking at an event in Berlin, Orbán said Ukraine cannot keep fighting without American weapons. Therefore, peace talks should not be conducted between Ukraine and Russia, but between the United States and Russia.

Of course, Joe Biden would not favor any such peace proposal. But the American people and Biden’s European allies could force his hand if the Ukraine war creates an energy crisis that pushes the world into recession. Bible prophecy indicates that Germany and Russia will divide Eastern Europe between them before World War iii breaks out—that means America will withdraw from the region sooner rather than later. The civilian casualties in Ukraine are horrific, but America does not have the willpower (or fiscal stability) to see this war through to its just conclusion. Its own problems are piling up fast.

The late Herbert W. Armstrong proved in his book The United States and Britain in Prophecy that the U.S. and Britain play the prophetic role of Israel in prophecy. And the greatest prophet of all time, Jesus Christ, told His disciples about a time when the world would be dominated by non-Israelite nations.

“And as he sat upon the mount of Olives, the disciples came unto him privately, saying, Tell us, when shall these things be? and what shall be the sign of thy coming, and of the end of the world?” (Matthew 24:3). Jesus did not correct these men and tell them that the world as we know it would never end. He answered their questions, detailing specific events that would occur when the present civilization comes crashing down (Matthew 24; Mark 13; Luke 21).

Jesus said the people of “Jerusalem” would “fall by the edge of the sword, and shall be led away captive into all nations: and Jerusalem shall be trodden down of the Gentiles, until the times of the Gentiles be fulfilled” (Luke 21:24).

Who are the Gentiles? Most people think that all non-Jews are Gentiles. But the Jews are just one of the 12 tribes of Israel. There are 11 other tribes that are Israelites, and not Gentiles. The first book of the Bible lists the tribes of Israel and prophesies their fate in “the last days” (Genesis 49:1). The descendants of Joseph’s son Manasseh would become a “great” nation and that the descendants of Joseph’s son Ephraim would become a “multitude of nations” (Genesis 48:19). This prophecy is one of the many proofs that Manasseh is the United States, the strongest nation in world history, and Ephraim is Great Britain, which governed a vast commonwealth of nations united by the English throne.

Jesus said that the “times of the Gentiles” would be a sign of the end time. Vladimir Putin’s brutal assault on Ukrainian civilians is a sign that this time of the Gentiles has begun. American weapons may be slowing Putin down, but mounting economic and political problems in the U.S. will soon cut off the flow of its weapons. After that, Ukraine will be at the mercy of either Germany or Russia until Jesus Christ returns to end the bloodshed (Matthew 24:21-22).