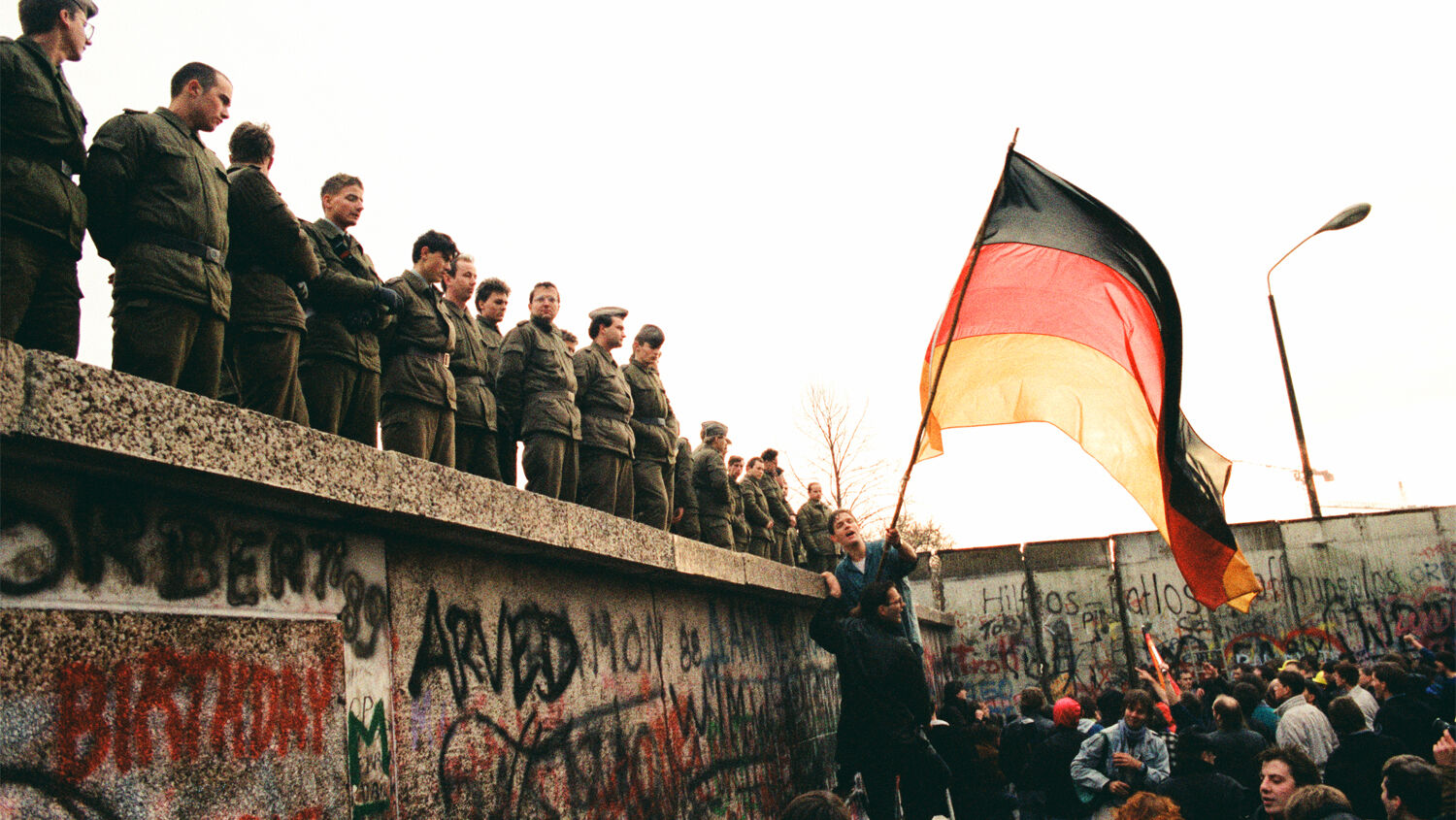 A man waves the German national flag under the gaze of East-German border guards on top of the Berlin Wall on Nov. 10, 1989.
Colin Campbell/Getty Images

Today marks the 32nd anniversary of German reunification. On this day in 1990, the course of Germany and all of Europe dramatically changed. While October 3 is celebrated by its partners around the world, Germany itself is troubled by old fears and has little reason to celebrate. As dramatic as the days were 32 years ago, even more dramatic days are ahead.

Germany is an enduring nato ally and an influential global leader. The United States is fortunate to have such a strong partner in our shared efforts to defend democracy, human rights, rule of law and the institutions that have underwritten peace and security for nearly eight decades. We thank Germany for its leadership in the G-7 this year, with its focus on shared goals related to climate, economic security, health, infrastructure and democratic values. During my travels to Germany this year, I have made clear the United States’ gratitude and admiration for Germany’s historic commitments to support Ukraine in response to Russia’s brutal, unprovoked war.

Germany is a key member of the North Atlantic Treaty Organization, which was formed in part to oppose Russian aggression. Following Germany’s reunification and the collapse of the Soviet Union, fears of Russian aggression diminished drastically. Today those fears have been revived in the midst of a hot war on the Continent that threatens to escalate to a nuclear war.

Many feared that a unified Germany would rise to dominate Europe and again become a dangerous military powerhouse. This fear diminished greatly as the nation’s defense spending declined gradually after the end of the Cold War. This, too, however has changed as Germany has pledged to drastically increase its military spending following Russia’s war on Ukraine.

Another fear that is again rising is the fear of poverty. Official data from Germany’s consumer price index (cpi) shows that for the first time since World War ii inflation hit double digits: 10.9 percent. Energy costs are rising and are expected to rise even more drastically this winter. German reunification promised prosperity for Western and Eastern Germany, but 32 years later this promise is being challenged.

What hasn’t changed is that America continues to see a strong ally in Germany. Many Germans, however, blame the U.S. for their troubles. They believe U.S. sanctions are forcing them into a war with Russia, when they could have enjoyed peaceful economic relations. Increasing economic troubles will likely intensify this feeling.

While this group may be a vocal minority, the German government has been keen to slow sanctions on Russia and delay arms exports to Ukraine. Germany has closely cooperated with Russia for a long time, and even though this cooperation seemingly ended in recent months, Germany has done a lot to uphold relations for a later revived alliance. To understand this trend, read Trumpet editor in chief Gerald Flurry’s article “Germany’s Secret Deal With Russia—Exposed.” Despite these worrisome relations, the U.S. trusts Germany with its most advanced fighter jets, as Mr. Flurry explained in “America’s Naive Trust in Germany.”

Thirty-two years after German reunification, we live in a different world. But for students of Bible prophecy, this hasn’t been a surprise. In fact, the events of the last 10 months were prophesied in accurate detail in the Bible. We are now witnessing the fulfillment of numerous prophecies that the Trumpet has closely watched. One of these prophecies is a rearmed militaristic Germany.

Revelation 17 speaks of a “beast that was, and is not, and yet is” (verse 8). This perplexing prophecy was revealed to the late Herbert W. Armstrong during the days of Adolf Hitler. Mr. Flurry explained:

Herbert W. Armstrong spent much of his life discussing this subject. This revelation describes the period when Mr. Armstrong was doing the work of God. God revealed to him secrets about this sixth resurrection of the Holy Roman Empire, which “was, and is not, and yet is.” He preached during and after World War ii, when the Hitler-Mussolini axis disappeared from the scene. It “was not”! And yet, God says, “it is”! The Axis powers lost the war, but as Mr. Armstrong preached time and again, they went underground—into “the bottomless pit” (verse 8). They are still there—they’re just underground. God says they are going to ascend right back up! Then Jesus Christ is going to come back and destroy this beast, and it will be gone forever.

Right now that power is ascending “out of the bottomless pit,” from underground. That is the deadly reality behind Germany’s transformation!

After World War ii, world powers tried everything to prevent Germany from rising again. At the time, this prophecy seemed unimaginable, but today’s reality proves this forecast was accurate.

Today, more and more Germans want a powerful military. This appeared unthinkable following the end of the Cold War, but again, this was specifically prophesied, as Mr. Flurry noted in “Ukraine Is Hastening a New Germany.”

To understand the new Germany that is rising 32 years after its unification, read “Ukraine Is Hastening a New Germany.” Also request a free copy of He Was Right to learn about these prophesied end-time events and about the man who proclaimed these prophecies to the world.