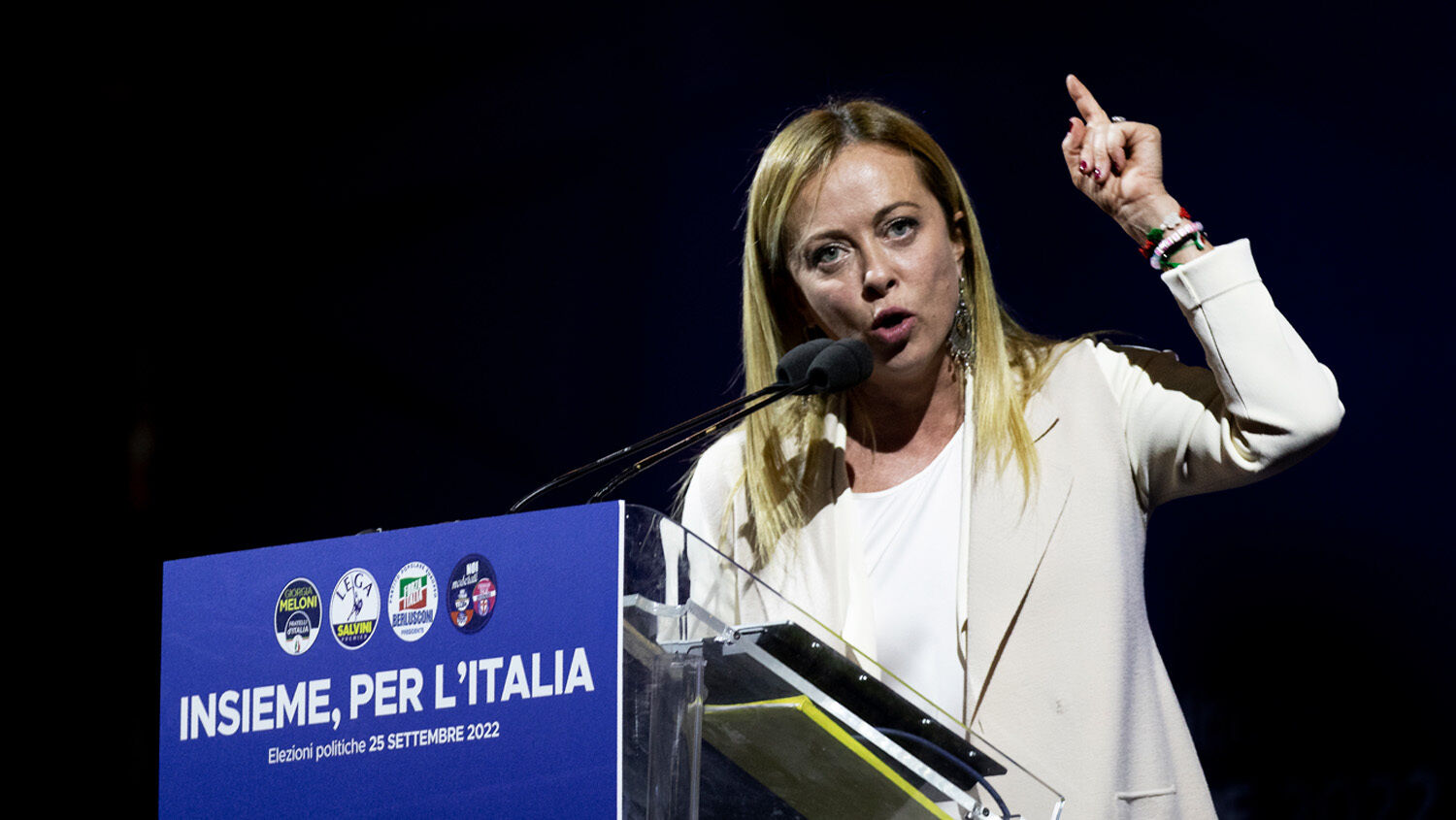 Giorgia Meloni leader of Brothers of Italy speaks during the closing rally of the center-right coalition on September 22 in Rome, Italy.
Alessandra Benedetti - Corbis/Corbis via Getty Images

All together, Italy’s right-wing alliance has everything the Bible predicted Europe would transform into in the end of days.

The September 25 election in Italy could be the most important one in the country’s history. In fact, the election could transform all of Europe. “For the first time since World War ii, Italy’s next leader could come from the far right,” Politico wrote on September 20. Even worse, Italy’s coming government is full of sympathizers of the old Italian fascist regime that seeks to resurrect the old empire.

Polls indicate that the alliance of Fratelli d’Italia (Brothers of Italy), Lega (League) and Forza Italia (Go Italy), will win a majority on Sunday, September 26. But more and more concerning details about these parties are emerging.

Recently, Italian media sources drew attention to the fact that Calogero Pisano of the Brothers of Italy compared party leader Giorgia Meloni to Adolf Hitler, not in an effort to discredit her, but to praise her. “In 2014, Pisano posted on Facebook a photo of Meloni blazoned with the slogan ‘Italy Above All,’” the Times of Israel wrote. “Underneath, he commented, ‘This reminds me of a great statesman from 70 years ago,’ adding that he was not referring to Italy’s Fascist dictator Benito Mussolini but to a ‘German.’” The Italian paper La Republicca also highlighted that Pisano expressed his support for Russian President Vladimir Putin on Facebook.

Pisano’s comments resurfaced just before the elections, which led to his suspension as candidate for the party in Sicily. While the party has no problem being associated with Mussolini, the Hitler comparison seems to go too far. But of course, the suspension is likely just an attempt to save face.

Meloni herself also has a troubling history. “As a teenager, she joined the youth wing of Italy’s neo-fascist movement, formed after the war by supporters of late dictator Benito Mussolini,” Politico wrote. “In her 2021 book, I Am Giorgia, she stresses she is not a fascist, but she identifies with Mussolini’s heirs: ‘I have taken up the baton of a 70-year-long history.’” (Richard Palmer, assistant managing editor of the theTrumpet.com, explained her ties to the past in greater detail in his article “Real Fascism Rising.”)

“The right-wing nationalist Giorgia Meloni could win the elections in Italy. Why are so many Italians enthusiastic about her and her party, which also contains the spirit of Mussolini?” Germany’s Zeit Online asked. A majority of Italians seem thrilled to have a leader who revives Italy’s past. But many in the West also see in her, however, glimpses of hope. “Unlike her right-wing allies, she has no time for Russia’s Vladimir Putin and is pro-nato and pro-Ukraine, even though many voters on the right are lukewarm on Western sanctions,” Politico noted.

Some see Matteo Salvini, the head of Italy’s League, who is also predicted to take a prominent role in the government, as even more dangerous. Recently, he has been able to portray his previously well-known support for Mr. Putin as a concern for Italian citizens. Leading up to the elections, he claimed that the current sanctions are harming Europe more than Russia. As the crises get more and more difficult, this message will likely gain traction. While Meloni publicly disagrees, she appears to see no reason to cancel the coalition. Another point that Meloni and Salvini disagree on is moving Italy’s Israeli embassy to Jerusalem, which Salvini promised to do. The two, however, agree on protecting Europe from the influx of migrants, preserving Europe’s Christian heritage, and walking in the footsteps of Mussolini.

All together this alliance has everything that the Bible predicted Europe would transform into in the end of days. Daniel 11:40, as Trumpet editor in chief Gerald explains in The King of the South, speaks of a European clash with radical Islam. The next verses indicate that there will be a peace deal with Israel, which will lead to a deadly double cross. The Bible also indicates that Italy and Germany’s alliance with Russia would again be part of Europe’s last attempt to gain world dominance. Revelation 17:8 specifically states that the empire went underground after World War ii—only to reemerge in our day. Who could better fulfill these prophecies than the very parties that promise to do just that?

Italy’s shift to the right is the fulfillment of Bible prophecy. Our book on The Holy Roman Empire in Prophecy explains the history and prophecy of this empire in detail. I encourage you to order a free copy. I also encourage you to watch Mr. Flurry’s latest Key of David, “Rise of the Holy Roman Empire,” to understand how momentous the events in Italy are and what they mean in light of Bible prophecy.