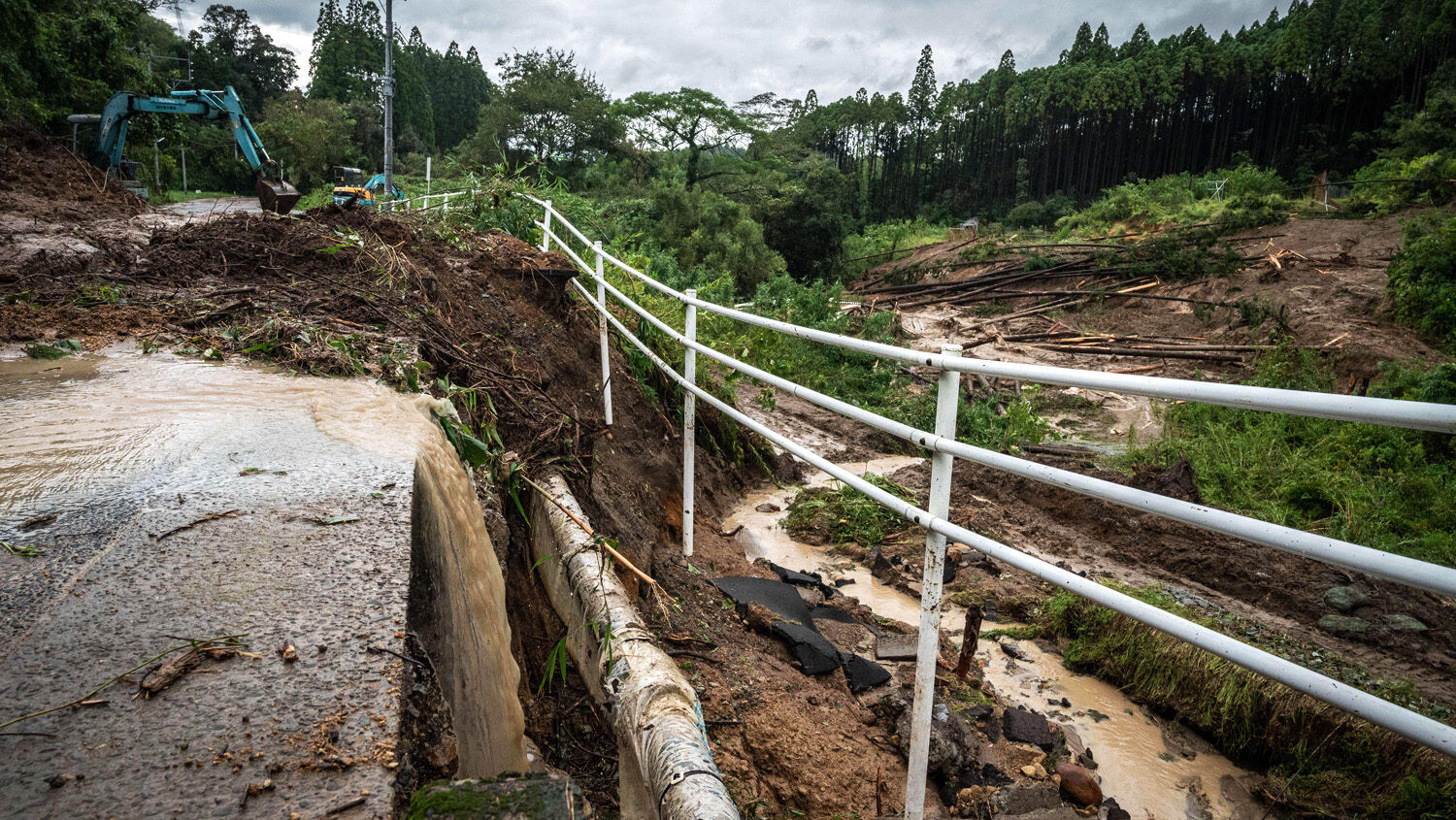 Damage from a landslide caused by Typhoon Nanmadol in Mimata, Miyazaki, prefecture on September 19
YUICHI YAMAZAKI/AFP via Getty Images

A reason to reconsider Japan’s decision to remilitarize

Nine million people were told to evacuate their homes in preparation for the super typhoon Nanmadol, which hit Japan between September 18 and 20. Hundreds of flights were canceled and ground transportation came to a standstill. Tens of thousands stayed in emergency shelters the evening of September 19, and almost 350,000 homes have lost power. Despite all warnings and precautions, at least four people died with more than a hundred injured. Many agree that it could have been much worse and future typhoons are only a matter of time. As their frequency and severity rise, Japan should ponder the path it has recently embarked on.

A report released by the Meteorological Research Institute in August 2020 revealed that in the last 20 years the number of typhoons hitting Tokyo increased 1.5 times over the previous 20 years. That’s a 50 percent increase in typhoons since 1980. “The typhoons themselves are also changing, becoming stronger and staying around longer,” Japan Forward wrote at the time.

Of Nanmadol, the Guardian wrote: “While the meteorological agency had warned of a potentially devastating typhoon, which came ashore unleashing gusts of up to 234 kilometers (145 miles) an hour, the damage appeared relatively limited.” In 2019, Typhoon Hagibi killed approximately 100 people.

Although Nanmadol calmed before hitting land, it was still a major wake-up call that exposed Japan’s vulnerability and brought considerable damage.

The recent storm comes on the heels of the July 8 assassination of Shinzō Abe. The main goal of Abe’s long political career was to transform Japan once again into a military power. Parliamentary elections two days after the murder show that the nation stands more behind his ideas than ever. The Liberal Democratic Party that calls for doubling the current military budget to 2 percent of Japan’s gross domestic product won a rare supermajority on July 10.

Japan today has legitimate fears that contribute to this push to remilitarize. But it has been preparing for this for many decades. In 1971, late educator Herbert W. Armstrong warned: “Japan today has no military establishment. But we should not lose sight of the fact that Japan has become so powerful economically that it could build a military force of very great power very rapidly.” Since then, the nation has made great strides toward militarization, and our world in general has become much more dangerous. But there is more than one reason to be concerned about Japan’s return to militarism.

“During World War ii, the Empire of Japan conquered much of Southeast Asia and the Western Pacific. In doing so, the nation descended into an appalling state of fanaticism and cruelty, and it authored some of the worst brutality in mankind’s history. The war crimes were so extreme that even Nazi soldiers stationed in Asia are on record expressing their shock,” we wrote in our September 2022 Trumpet issue.

What’s more, Bible prophecies recorded in Ezekiel 38 and Revelation 16:12 warn that Japan will again contribute to great savagery. Revelation 16 specifically describes a 200 million-man army that pulls soldiers from various Asian nations to seek world dominance. “Japan’s march toward militarization today is vital to watch because it is creating the conditions for that prophesied Asian bloc to become a military force of unfathomably destructive power. Each Japanese move toward remilitarization represents a step closer to that gargantuan army and unprecedented world war.” (Read “Land of the Rising Military Might” to understand these prophecies and Japan’s recent history.)

Could it be that the recent storms are a warning from God to Japan? Could it be that He is reaching out, giving the nation a chance to repent of the path it is treading that will again lead to great savagery?

“[T]he Lord hath his way in the whirlwind and in the storm, and the clouds are the dust of his feet. He rebuketh the sea, and maketh it dry, and drieth up all the rivers …. The mountains quake at him, and the hills melt, and the earth is burned at his presence …” (Nahum 1:3-5). “He loads the thick cloud with moisture; the clouds scatter his lightning. They turn round and round by his guidance, to accomplish all that he commands them on the face of the habitable world” (Job 37:11-12; Revised Standard Version).

“God wants this world to learn that He controls nature,” Trumpet editor in chief Gerald Flurry explains in Nahum—An End-Time Prophecy for Germany. “Many natural disasters are anything but natural. Soon, arrogant men will learn this lesson very deeply.” Every indication is that it will take much more than a storm for mankind to finally listen to God. Our free booklet Why ‘Natural’ Disasters? explains this lesson in great detail. Even more it reveals the cause of human suffering and the wonderful future God will bring about despite human arrogance.