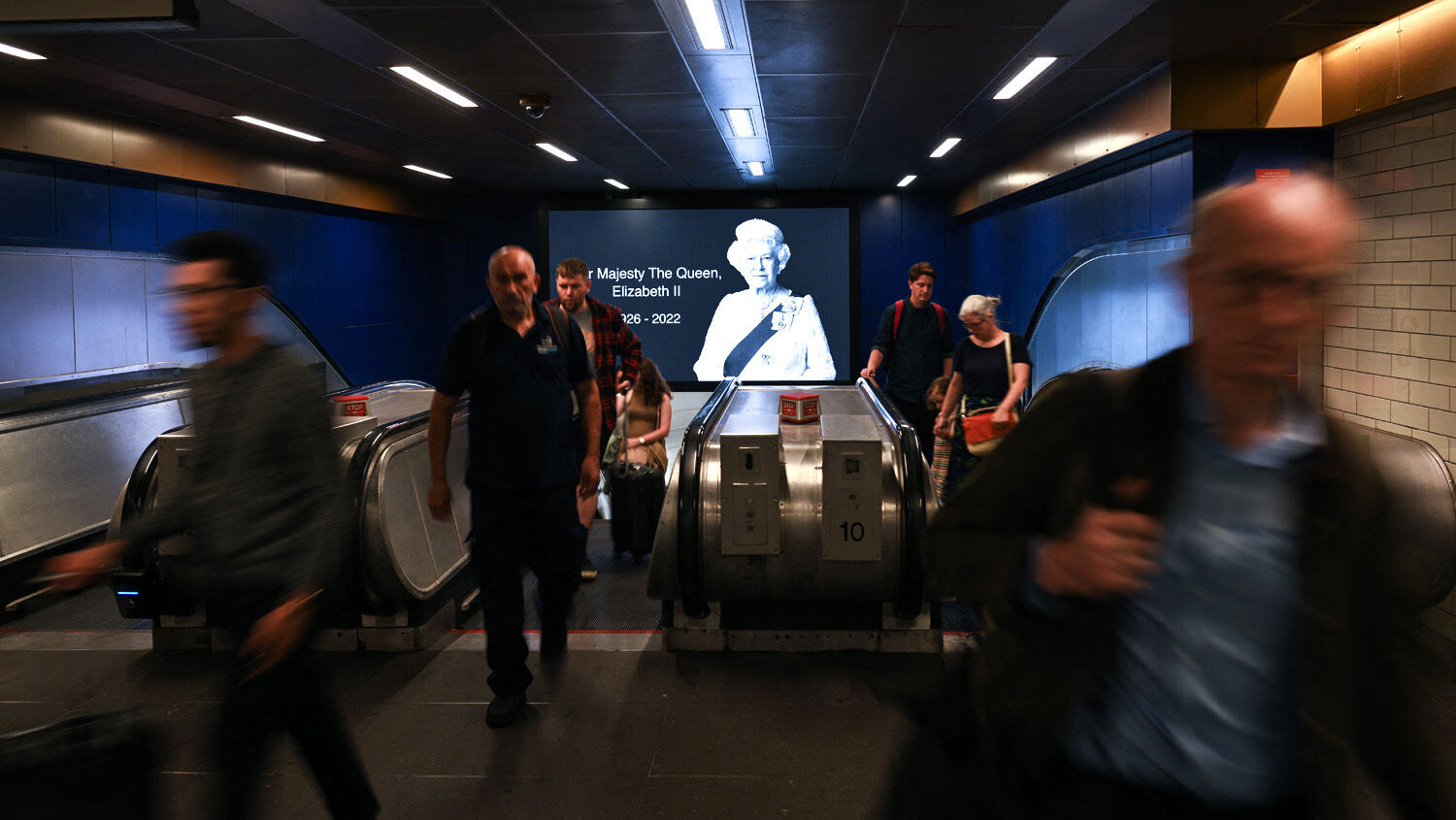 Pedestrians walk past a portrait of Britain’s Queen Elizabeth ii on September 11 in the London Underground.
LOIC VENANCE/AFP via Getty Images

The nation’s mourning is a reflection of 70 years of change.

Monday, September 19, was a day of mourning Queen Elizabeth ii. An estimated 4 billion people watched her funeral and procession. It was a moment that blended regal solemnity and inspiring traditions. The Commonwealth nations participated in the ceremony, including a prominent Canadian delegation and military contingent. Canadians are joining Britain, the Commonwealth and the world in honoring the Queen’s life.

Yet how Canadians are mourning the Queen highlights how fractured society in the dominion has become, and how much the nation has changed in 70 years.

Anecdotally it appears most Canadians have a high opinion of the Queen as the video below indicates. All Canadians I spoke to in the days leading up to the Queen’s funeral were supportive and complimentary of the Queen.

Yet the mainstream media are painting a very different picture. “Nearly 60 percent of Canadians want a referendum held to determine whether the country stays tied to the British monarchy, a new poll suggests—despite nearly equal support both for and against preserving those ties,” wrote Global News. “While 82 percent of respondents said they approve of Queen Elizabeth’s performance as monarch, just 56 percent agree Charles will do a good job in her place.” According to an Angus Reid poll conducted soon after the Queen died, 54 percent of Canadians support cutting ties with the monarchy. For years there has been a 50/50 split on this issue, but the Queen’s death appears to have shifted the numbers slightly.

Another poll from Leger suggests that most surveyed are indifferent to the death of the Queen. “A new poll suggests that while many Canadians plan to watch Queen Elizabeth ii’s funeral next week, the vast majority have not been personally impacted by her passing and feel no attachment to the monarchy,” wrote the Canadian Press. “… 77 percent said they felt no attachment to the British monarchy.” These polls are being used by the media to subtly craft an anti-monarchy narrative. The cbc looked for any Marxist who was willing to speak ill of the Queen, as the Financial Post reported: “But of course the intrepid explorers in the newsroom did manage to dig up an anti-monarchist or two and more than one Marxist professor—the remaining Marxists are nearly all professors—willing to talk about the bloodstained, exploitative and racist British Empire.”

Some elites are not hiding their disdain for the British throne. Global News reported: “Public school teachers in York region are being told to avoid any memorials or tributes to Queen Elizabeth ii in classrooms because the subject might be ‘very triggering’ to some students.” To the credit of Ontario Premier Doug Ford, the province ordered the York school board to overturn the policy and “honor the Queen on the date of her funeral.” The original September 9 memo from York region told teachers that classrooms are “neutral environments” and that staff could not develop tributes or activities to the Queen, live stream the funeral, or play “God Save the Queen.” Global News continued:

“Monarchies are steeped in problematic histories of colonialism which connect to ongoing present-day oppression of individuals and groups. It is important to consider how each staff and student’s lived experience may potentially shape their perspective of the monarchy and be respectful of this,” the memo states. The board added, however, that “this is not the time to debate monarchies” because the “impacts of colonialism are pervasive and ongoing.”

York region cited diversity as a major reason for censoring the Queen. Indeed Canada’s demographics have radically changed over the past 70 years. Thomas Klassen at tvo wrote: “During her long reign, Canada became dramatically less anglophone and anglophile. Nearly half of Canadians were of British ancestry when she assumed the throne in 1952, but that had decreased to one third in 2016 and continues to decline.” This trend is only expected to continue in the future and will continue to dilute Canadian ties with Britain. Klassen continued:

In the 1950s, high school students across English Canada waved the Union Jack, sang the royal anthem (“God Save the Queen”), said the Lord’s Prayer, and cheered cadet corps dressed in British khaki. Elizabeth saw the replacement of the Union Flag by the Maple Leaf in 1965, and the royal anthem by “O Canada” in 1980.

Over seven decades, Elizabeth successfully transitioned from embodying the key traditions and beliefs of many, to a warmly regarded, but not particularly significant, figure in the lives of Canadians.

This change of the throne’s role in Canadian life has been primarily achieved through the undercurrent of French influence in Canadian government.

Canada is fundamentally different from any Commonwealth nation in the world. The foundation of Canada is based upon a compromise between English and French. Engraved into Canadian laws, institutions and society is a culture, religion and way of thinking that is hostile toward the British throne. French Quebec, to this day, is anti-English and loyal to the papal throne, not the British throne. The disproportionate political power of French Quebec has skewed Canada in an anti-monarchy direction.

This is why the leader of the Bloc de Quebecois, Yves-Francois Blanchet, authored an op-ed in the Journal de Montreal, saying: “With all due respect for the institutions, and with compassion for the bereaved citizens, I am of the opinion that the succession of England’s throne is an opportune moment to reflect on the continuation of our subjection to a power that Québec, as a people, never chose” (Trumpet translation). During the September 15 special session of Parliament to honor the Queen, Blanchet said, “The history between the crown and the Quebec nation is both thorny and cruel.” He then announced he and members of the Bloc would not stay for any of the remaining commemoration ceremonies.

This anti-monarchist thinking from Quebec has been around since 1759 at the Battle of the Plains of Abraham and was even guiding the policy of the country when the Queen ascended to the throne in 1952.

Twelve Canadian prime ministers served during Elizabeth’s reign, the first being Louis St. Laurent, a Liberal French-Canadian. St. Laurent presided over Canada’s “golden age” in the postwar economic boom of victory. One of his main objectives after the war was to “remove the British Commonwealth’s aura of imperial solidarity.” He dropped British terms from official government language, such as the word “dominion,” and according to Desmond Morton at Policy Options, his “blood boiled” when Britain used force to take back the Suez Canal. As a French-Canadian, he hated the British Empire. This continued under St. Laurent’s successors. The Globe and Mail explained: “From Confederation until the 1950s, Canadian politics was often a tug-of-war between Liberals wanting ever greater distance from Britain and the Empire, and Conservatives wanting to hold ties. … Succeeding Liberal governments under Lester Pearson and Pierre Trudeau had other ideas, driven in large part by the need to make Canada fully welcoming to its French fact.”

This policy has continued under Justin Trudeau, who despite being sincere in his mourning for the person of the Queen, holds contempt for the institution of the monarchy. Under Trudeau’s leadership, hundreds of online records and historic sites have been edited to portray British colonialism as racist and genocidal. That is why it is not surprising he would embarrass the country by singing “Bohemian Rhapsody” in London two days before the funeral.

This anti-English sentiment has been combined with radical communism. During the Queen’s reign, especially in the 1960s and ’70s, Canada and the Western world experienced the Communist infiltration of our educational and governmental institutions. Communism is inherently hostile to the British throne. This French radical-left union has been very effective at fundamentally changing Canada.

Trudeau recently stated that abolishing the monarchy was a “nonstarter” due to the other pressing issues on Canadians, like inflation and climate change, and because of Canada’s difficult built-in process to effect such change. Abolishing the monarchy would require the House of Commons, Senate and all 10 provincial legislatures voting to make this change. However, Trudeau has never rejected the idea of cutting ties. Time will tell if this is pursued by the radical left or not.

The Queen’s death ties into Bible prophecies being fulfilled right now. Trumpet editor in chief Gerald Flurry wrote in the article “The End of an Era for Britain”: “The Queen’s death could further weaken and dissolve the already fading ties that once formed the greatest empire in history: the British Empire.” Canada is a child of the British Empire. The late Herbert W. Armstrong explained in The United States and Britain in Prophecy that Canada and the other Commonwealth nations are being cursed because of rebellion against God. These nations are descended from biblical Israel. The Empire and Commonwealth were part of God-given blessings because of the patriarch Abraham’s obedience. The strong movement in Canada to destroy ties to the monarchy is an attack on this inspiring history with God.

In many ways, the Queen was the last remaining bulwark against radical change in Canada. The radical left, combined with French-Canadian hostility, have been working to undermine the British throne during the entire reign of the Queen. This movement will likely intensify during the reign of King Charles iii.

To learn more about the prophesied future of Canada and the Commonwealth, please read The United States and Britain in Prophecy.