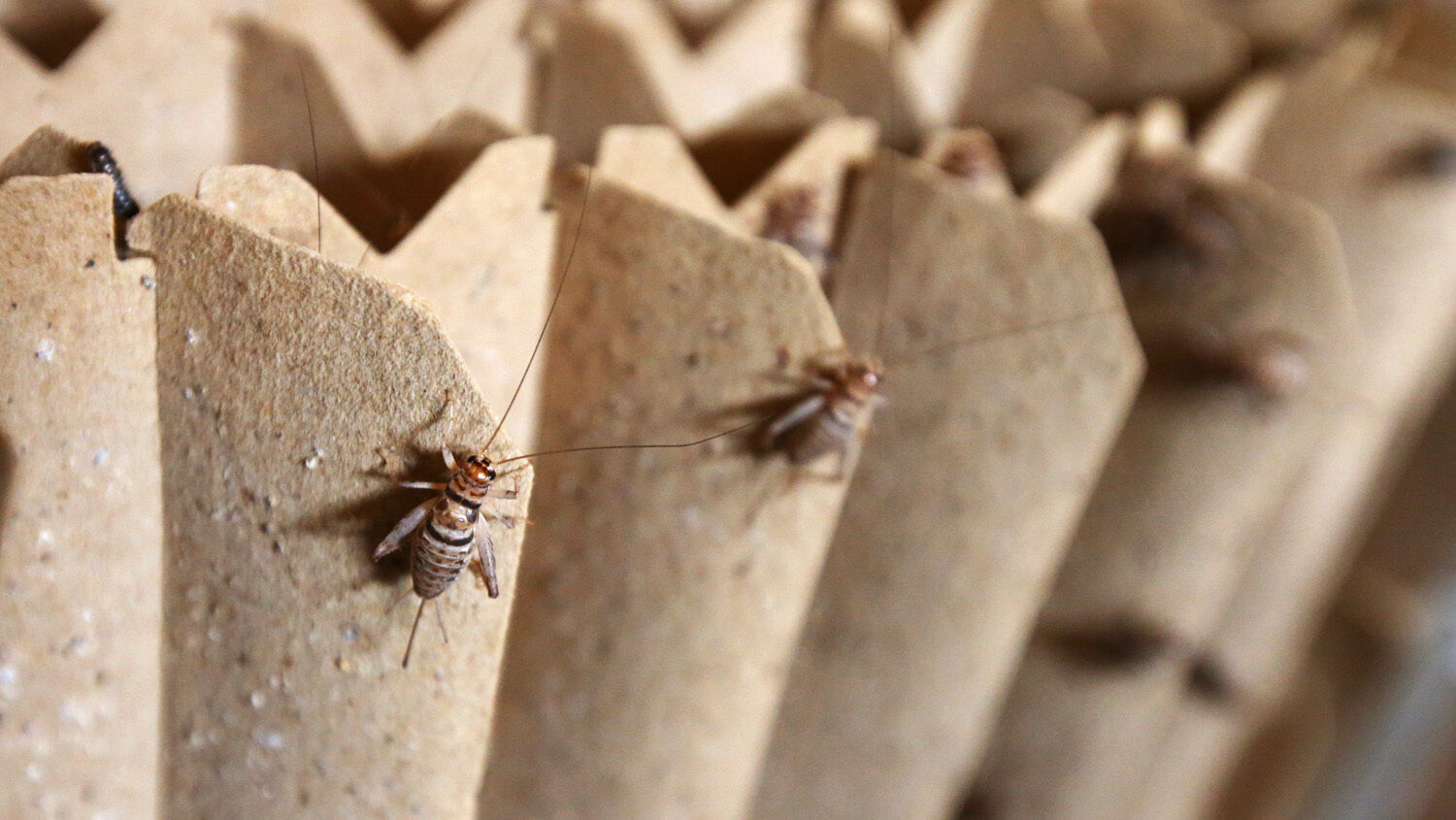 Why does the radical left want you to eat insects?

Canada is now home to the largest cricket farming facility in the world. In June, Aspire Food Group opened the 4.8-hectare facility outside London, Ontario. When running at peak capacity, the facility will produce 13 million kilograms of crickets per year. Just how many crickets is that? An average cricket weighs 0.5 grams. That is an average of 26 billion crickets per year! That is 520 times the current annual demand in the entire United States for pet food crickets.

So what are they planning to do with all of these crickets?

“The plant comes with lofty goals. The chief executive officer hopes it will help tackle the planet’s food insecurity problems,” reported cbc. “‘Crickets have this incredible ability to convert what they eat into protein biomass,’ said Mohammed Ashour, cofounder of Aspire Food Group. … Ashour launched his idea to breed and farm insects for food in 2013 when he was a medical student at McGill University. He grew up in Montreal and now calls London home.” Although the plant will make revenue by selling to the pet food market, the entire premise of the facility is to provide an alternative source of food for humans.

“Along with a handful of his classmates, Ashour’s team won the $1 million Hult Prize, which challenges young entrepreneurs to provide a solution to some of the world’s most pressing issues,” continued cbc. Ashour told cbc: “We have a massive growth in both population and appetite for protein, while at the same time we’re seeing a significant reduction in arable land and resources to produce food. Our longer-term vision is to make sure that this is a protein source that can be available and affordable to genuinely address food insecurity in many countries around the world.”

The Hult Prize is funded by the United Nations, which funds projects that target climate change initiatives. Aspire also received millions of dollars from the government of Canadian Prime Minister Justin Trudeau. Karen Selick wrote at the Western Standard: “As well, the company appears to have received $16.8 million from Canadian taxpayers through something called NGen (Next Generation Manufacturing Canada). It looks as though that’s just the first installment, however; the project total for the ‘insect protein supply chain in Canada’ is shown on NGen’s website as $73 million.”

Selick continued: “Aspire’s website acknowledges that it also received a third government grant, namely $10 million from sdtc (Sustainable Development Technology Canada) in June 2020. sdtc describes itself as ‘a foundation created by the government of Canada in 2001 to invest in clean technologies that address climate change, air quality, clean water and clean soil.’”

The Canadian Department of Agriculture awarded an additional $8.5 million to the London facility. The department news release states: “Alternative sources of protein such as insects provide an opportunity for Canada’s agriculture and agri-food sector to more sustainably meet global demand for food. Aspire’s goal to tackle global food scarcity led to its focus on edible insect production, which can provide high volumes of nutritious food with a low environmental footprint. … This investment will allow the company to monitor and grow billions of crickets at a time, producing a nutrient-rich protein for premium health food and pet markets.” Aspire Group, and the Canadian government, is ideologically committed to providing crickets as food to help stop climate change.

How can eating crickets affect the climate? According to the narrative, insects are a more environmentally friendly protein because they do not produce methane like cows. The UN published a report calling on people around the world to eat less red meat in order to save the planet. The Canadian government is radically targeting agriculture to meet climate goals even if it causes the collapse of crop yields in future harvests. Similar plans target the cattle industry in Canada.

“A research report published by a federally funded consultancy group says that Canadians must cut their meat and dairy consumption by half by the year 2050 to reach federal climate targets,” reported True North. “Researchers concluded that to reach net-zero emissions by 2050 and 40 percent below 2005 levels by 2030, Canadians need to cut out meat and dairy by 35 percent by 2030 and in half by 2050.” Health Canada attempted to force meat producers to add health warning labels to all ground beef products in grocery stores, but exempted beef products at the last second. The government is trying to craft a narrative we must eat less red meat to protect our health and save the environment.

What will replace protein from red meat? Twenty-six billion crickets per year.

Would you be willing to replace prime rib and steak with fried crickets? Those pushing for this know it can’t be done suddenly, but only through subtle messaging and the gradual use of insects as a food ingredient.

Selick continues at the Western Standard: “Aspire is working with nacia, the North American Coalition for Insect Agriculture, to normalize cricket consumption for North Americans. Here’s the public version of their report on how this might be accomplished: by positioning crickets as an eco-friendly, nutritionally dense ‘superfood.’ One can only imagine what the private version of the report might say. Normalization propaganda is already being prepared. This study, published by the U.S. National Library of Medicine, ‘is expected to promote greater recognition of crickets as a source of food, feed and other benefits in the world and encourage up-scaling by farming them for sustainable utilization.’ It was funded by various governments around the world, including Canada’s.”

Dr. Robert Malone points out that cricket flour and cricket protein powder, and other such products, are already heavily promoted at Amazon and Walmart. Cricket flour is used in many junk foods and ultraprocessed foods, such as cheddar puffs. It is usually listed in the “Contains” section on the label, not the main ingredients list. Black soldier flies, mealworms and ants are other insects being considered by the food industry.

“[I]nsects have been slipped into our food for decades, used as colorants, confectionery glaze, and added protein,” writes Melanie Ridson of the Western Standard. “Cochineal insects—from the beetle family—have long been used as a red coloring for juices, jams, yogurt, tomato products and other foods requiring a red dye. The beetles are cooked or boiled, dried, and ground up to make a red dye that is added to many foods. Look for the ingredient ‘carmine’ or ‘cochineal’ or it could be listed as ‘natural red 4’ or ‘crimson lake’ on the food labels. Colourful candies like jellybeans can sometimes be coated with ‘shellac’—a sticky secretion from the Kerria lacca insect. Also used to coat fruits, coffee beans and other foods to give them a sheen, the coating is listed as “confectioner’s glaze” on food labels.” Likely to be added to this list is cricket flour or protein.

Many people around the world do eat insects for food, but out of necessity. Nearly all nations that use insects as a staple or street food are impoverished Third World populations. People are just trying to survive. Even John the Baptist ate locusts and honey while doing God’s work in a remote area of Judea (Matthew 3:4). This was not the normal diet for those of the first-century era, Christian or not. There are also health concerns: Most experts do not know the ramifications of an insect-heavy diet. Many people who have a shellfish allergy are also allergic to crickets.

So why are the leaders of the Western nations promoting the cricket diet?

This initiative is part of an effort to undermine the strength and advantages enjoyed by America and Britain. The late Herbert W. Armstrong explained in The United States and Britain in Prophecy that America and the British Commonwealth are descendants of biblical Israel and were given blessings of prosperity and national power. This included blessings of food security and abundance (Genesis 27:26-29). Deuteronomy 28:4 says agriculture and cattle would be blessed: “Blessed shall be the fruit of thy body, and the fruit of thy ground, and the fruit of thy cattle, the increase of thy kine, and the flocks of thy sheep.” Proper nutrition, especially red meat, is a strategic advantage over many nations of the earth.

However, in our time now, these blessings are being replaced with curses. This is because of widespread rebellion against God’s law. Our food security will be wiped out partially through weather curses, but also through self-inflicted decisions. The attack to “blot out Israel” (2 Kings 14:27) by the radical left includes using climate change to strip away these material blessings and impoverish America and Britain in order to complete a Communist transformation. The radicals want to abase the Israelite nations into Third World nations. Amazingly enough, these Communists are using crickets to achieve that end.

The reason they want you to eat crickets is because they want control. The Bible does prophesy food scarcity and famines as part of the curses for sin. No matter how many crickets are produced, it will not protect our nations from divine judgment. Crickets are not the solution to food scarcity. Repentance toward God is the solution. This is the first step to solving every problem facing this world.

To learn about God’s solutions and master plan, please read The United States and Britain in Prophecy.