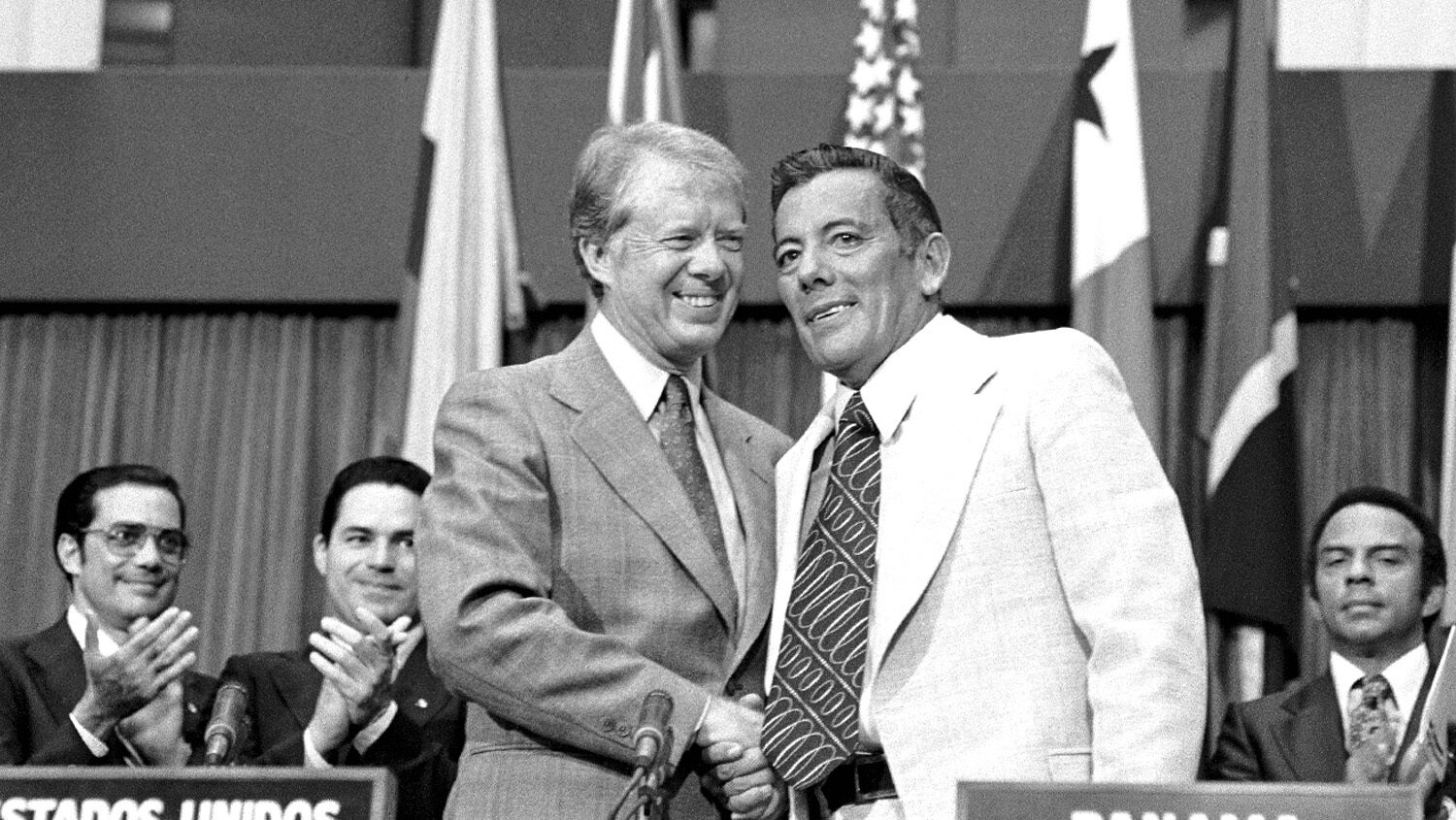 When United States President Jimmy Carter finished signing his name on the treaty document, the room burst into wild applause. Sitting next to the leader of the free world, wearing a triumphant smile, was the Communist president of Panama, Omar Torrijos. During the ceremony, President Carter remarked: “This opens a new chapter in our relations with all nations of this hemisphere, and it testifies to the maturity and the good judgment and the decency of our people. This agreement is a symbol for the world of the mutual respect and cooperation among all our nations.”

With the stroke of a pen on Sept. 7, 1977, President Carter signed the Carter-Torrijos Treaty, which handed over control of the Panama Canal to Panama by Dec. 31, 1999. Despite the congratulatory celebrations, this event was one of the most consequential betrayals in American history. It is the day the United States abdicated its position as the world’s superpower.

Trumpet editor in chief Gerald Flurry warned in the January 2000 Trumpet magazine in “The Rise and Fall of a Superpower”: “Building the Panama Canal was one of the greatest chapters in American history. It helps to reveal how America became a superpower, if we understand the complete history. Today we see an almost totally different spirit in our leaders. The meaning behind that change contains the strongest warning ever for America!”

The devastating consequences of this event, 45 years ago today, will play out in the near future.

The construction of the Panama Canal cemented America as an international power. Following the American Civil War, the U.S. took several decades to reunify and fully harness the industrial power at its disposal. After generations of internal strife, Americans were ready, at the dawn of the 20th century, to expand their horizons beyond their borders. What they lacked was a leader who could mobilize that vision into action.

Theodore Roosevelt was the president who recognized America’s destiny as a superpower. Probably the most important action he took was the construction of the Panama Canal. Mr. Flurry writes in China’s Dangerous Move Against America: “After 10 years of innovation and backbreaking toil, after U.S. taxpayers had provided hundreds of millions of dollars, after losing over 5,600 lives, and after removing enough dirt to bury all of Manhattan to a depth of 12 feet, the Americans succeeded where so many others had failed. They realized the 400-year-old dream that others had thought impossible. … But the canal didn’t just serve America. It slashed shipping costs and opened up free trade and all kinds of services and blessings to the whole world!”

This achievement of the American people is a monument to the pride and power of the nation. Mr. Flurry continues: “[T]he late Charles Krauthammer, said building the ‘strategic jewel’ that was the Panama Canal launched America ‘to the rank of great power.’”

However, this was not just the fruits of human effort. The Panama Canal was prophesied to be given to the United States. The late Herbert W. Armstrong proved in The United States and Britain in Prophecy that God unconditionally promised to the descendants of Abraham blessings of national power and wealth, including the control of strategic sea gates (Deuteronomy 28:52). Britain and the U.S. controlled every major sea gate at the peak of their power. Mr. Flurry writes: “Britain and the U.S. didn’t gain all these strategic gates because we are somehow better than other nations. God gave these awesome gifts to us! He gave them so we could virtually rule the world—but in a far more benevolent way than powers like China ever would.”

Yet Bible prophecy is even more specific, and directly identifies the Panama Canal. In Genesis 22:17, God promises Abraham, “[T]hy seed shall possess the gate of his enemies.” “Gate,” in this case, is singular, not plural. Mr. Flurry explains: “Which gate could this be? Which one is God singling out as the main fulfillment of this blessing from God? I don’t believe any sea gate could be called ‘the gate’ except the Panama Canal.”

What an amazing gift from God to the people of America. What amazing faithfulness by God to give it to Abraham’s descendants though we did not deserve it or earn it. For many years, America did use this gift to help the entire world. Yet this was surrendered away. What does God think about that?

Signing Away ‘the Gate’

America’s involvement was always a point of contention in Panama, especially when the nation became swept up in the Marixst revolutions that dominated that part of the hemisphere. In the 1920s, 1930s and 1960s, the United States kept making concessions to the radical government of Panama, who would blackmail the U.S. government by allowing riots in the canal zone, which would disrupt international trade. President Lyndon B. Johnson came under a great deal of pressure to give up the canal.

The tipping point came with the administration of President Carter, who decided to abolish the Hay-Bunau-Varilla Treaty of 1903, which gave the U.S. exclusive ownership over the canal zone (which the U.S. paid $10 million for). Mr. Flurry writes: “Those plans culminated in a terrible deal signed in 1977. That is when Panama’s dictator, Omar Torrijos (one of the few Latin American leaders who visited Castro in Cuba), signed new treaties with U.S. President Jimmy Carter that replaced the 1903 Roosevelt treaty. Under the new terms, Carter agreed to transfer the canal to a small group of political thugs in Panama. In other words, Carter just gave away this ‘strategic jewel’!” At the time, two thirds of the American people opposed the new treaty, yet President Carter gave away the strategic jewel without a fight.

This signaled a dangerous decline in America’s stature in the world. It also was the fulfillment of another Bible prophecy. Just as God promised to give to Abraham’s descendants these amazing blessings, He also warned they would be taken away over time through a number of curses if the people did not obey God’s laws.

“In Deuteronomy 28:52, God says that if the descendants of Abraham, Isaac and Jacob refused to turn to Him, He would cause their enemies to take control of all of the very same gates He had previously blessed them with,” writes Mr. Flurry. Leviticus 26:19 says that God would “break the pride of your power.” Above all, the Panama Canal was a symbol of America’s power, and giving it away perfectly encapsulates this prophecy.

After President Carter signed the new treaty, it was officially transferred over to Panama in 1999 under the Clinton administration. If any agreement between two nations is to last, it must serve the best interests of both nations. On Sept. 7, 1977, President Carter declared:

The new treaties do that. And by guaranteeing the neutrality of the Panama Canal, the treaties also serve the best interests of every nation that uses the canal.

This agreement thus forms a new partnership to insure that this vital waterway, so important to all of us, will continue to be well operated, safe and open to shipping by all nations, now and in the future.

Time has shown that the exact opposite has happened. The Panama Canal is now controlled by one of the U.S.’s main rivals.

In that 2000 Trumpet article, Mr. Flurry warned: “I predict—based on history and the Bible—that the Panama Canal area will be a great curse to America now and in the future. And that curse has already begun!” In 1997, two years before the formal handover, the Chinese company Hutchison Whampoa took control of the ports at either end of the canal. This company is controlled by the Communist Chinese government.

“The trail is already blazed!” wrote Mr. Flurry. “Now China is just waiting for the time when it feels it is ‘necessary.’ When the circumstances are right, China can move its military into Panama. Then it will be able to not only deny America transit through the canal, but also use its presence there as a staging ground to attack the U.S. underbelly!” Bible prophecy indicates China will play a major role in a future trade war against the United States.

The Isaiah 23 “mart of nations” will be a European-Asian economic alliance that will lay an economic siege on America and the British Commonwealth. The Panama Canal is an essential key to this trade war. As America succumbs to internal strife, China will use the Panama Canal to help strangle the superpower into submission.

The day America abdicated as a superpower it set in motion several Bible prophecies. God is trying to teach us cause and effect: All of this tragic history is the result of rebelling against God’s laws, which actually show us the way to blessings and peace. This is leading to the return of Jesus Christ, when all nations will learn to obey God and prosper forever.