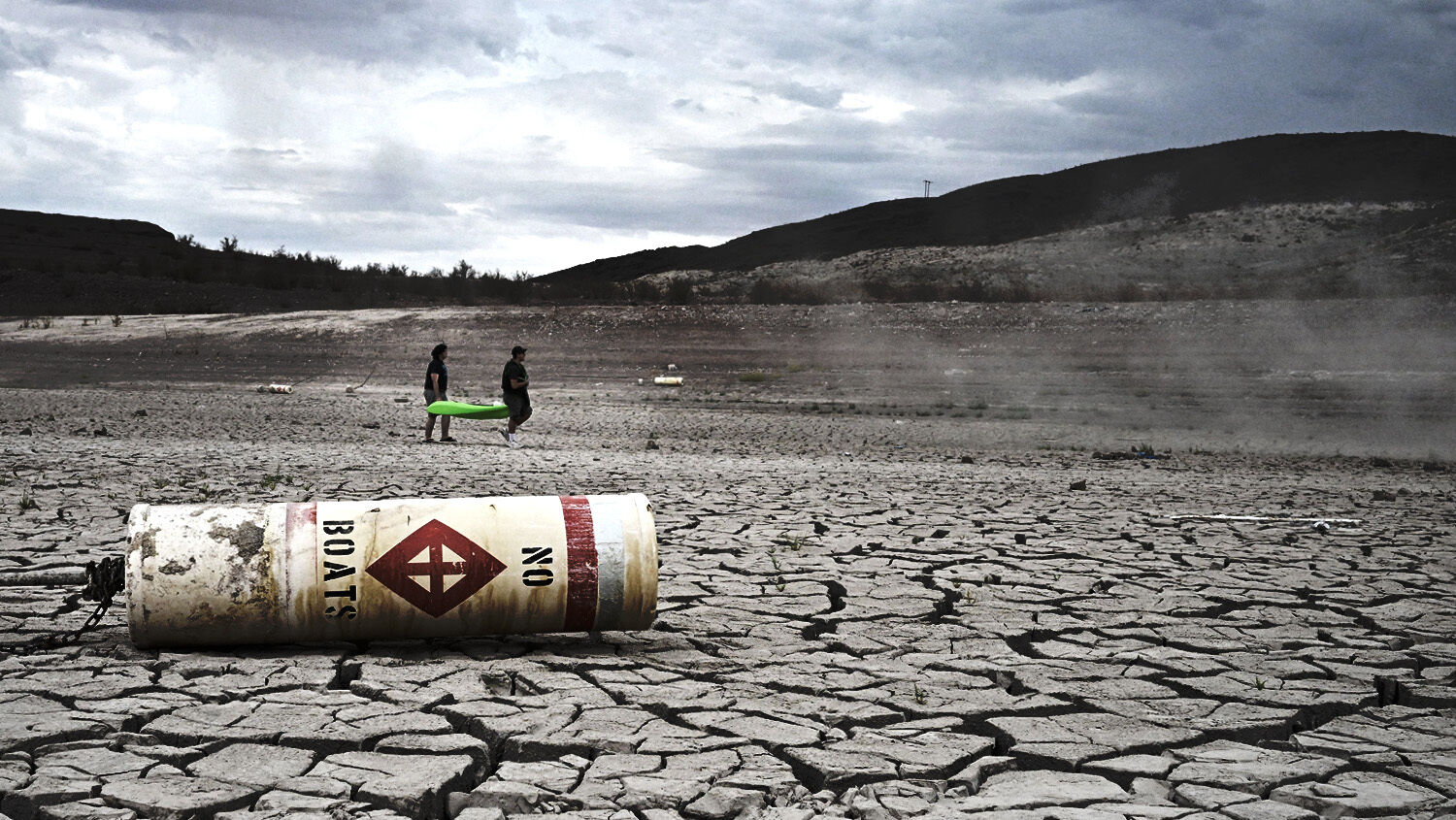 A buoy lies on the cracked lakebed of Lake Mead in Nevada, on July 23.
FREDERIC J. BROWN/AFP via Getty Images

Inflation isn’t the only thing causing the price of food and energy to increase.

The western United States is experiencing its most severe drought in a millennium, and millions of Americans are feeling the devastating effects. The Colorado River supplies water to about 12 percent of America’s people, and it is drying up fast. The levels in Lake Mead—a 250-square-mile reservoir fed by the Colorado River—have dropped to a quarter of its total capacity. So, the U.S. Bureau of Reclamation is demanding seven states in the Colorado River drainage basin to find ways to reduce their water consumption by as much as 40 percent.

If these seven states refuse to comply, both Lake Mead and Lake Powell may run dry. That would cause the Hoover Dam and the Glen Canyon Dam to stop functioning, leaving 4 million people without electricity. But if these states do comply, the effects on U.S. agriculture could be devastating. Eighty percent of the Colorado River’s water is used to irrigate 15 percent of America’s cropland. Slashing water consumption by 40 percent could cause the price of beef and winter vegetables to skyrocket as southwestern states run out of water.

“In order to avoid a catastrophic collapse of the Colorado River system and a future of uncertainty and conflict, water use in the basin must be reduced,” said Assistant Secretary for Water and Science Tanya Trujillo in an August 16 statement. “The Interior Department is employing prompt and responsive actions and investments to ensure the entire Colorado River Basin can function and support all who rely on it.”

So far, states have blown past their deadline to come up with a water conservation plan. The required consumption cuts will end up affecting people living in Arizona, California, Colorado, Nevada, New Mexico, Utah and Wyoming. The Bureau of Reclamation says it is only doing what is needed to get the people through to next year, but many analysts believe the quotas will have to remain in place until the drought ends.

A study published in Nature Climate Change found the 22-year span from 2000 to 2021 was the driest in the history of the Southwestern U.S. since a.d. 800 (when Charlemagne was crowned and the Mayan civilization was flourishing). And there is a real chance this drought will continue through 2030, so electrical blackouts and agricultural calamities may become a routine part of southwestern life for the next decade or so.

“Today even little nations dare to insult, trample on, or burn the United States flag—and the United States, still having power, does no more than issue a weak protest!” wrote Mr. Armstrong in his landmark book. “What’s happened to the pride of our power? We have already lost it! God said [in Leviticus 26:19], ‘I will break the pride of your power!’ And He did! Other prophecies reveal we are to have soon such drought and famine that disease epidemics will follow, taking millions of lives. When our heaven is as iron, our earth as brass, we will realize rain does not come down from iron, and an earth hard as brass is not getting rain, not yielding food! Verse 20: ‘And your strength shall be spent in vain: for your land shall not yield her increase, neither shall the trees of the land yield their fruits.’ But will America and Britain heed? They never have!”

These verses reveal a time when the American sky will hold as much moisture as a sheet of iron, and American soil will be as soft and loamy as a plate of brass. That means drought and famine (Joel 1:10-16; Amos 4:7). The fact that the U.S. is suffering its worst drought in centuries should be a wake-up call alerting Americans to the reality that they are not listening to God, therefore He is punishing them for their sins (Leviticus 26:18).

God shows people how to end droughts and natural disasters. In 2 Chronicles 7:13-14, He says: “If I shut up heaven that there be no rain, or if I command the locusts to devour the land, or if I send pestilence among my people; If my people, which are called by my name, shall humble themselves, and pray, and seek my face, and turn from their wicked ways; then will I hear from heaven, and will forgive their sin, and will heal their land.” We need to take note of what God says about repentance because the Bible indicates that drought and food shortages will get much worse if we do not. If Americans do not “turn from their wicked ways,” the Colorado River and many other rivers will run dry as vast swaths of the United States turn into a barren wasteland.

For more information on the promise God makes in 2 Chronicles 7:13-14 and how it shows the solution to America’s problems, read “Is God Answering America’s Prayers?”, by Trumpet editor in chief Gerald Flurry.