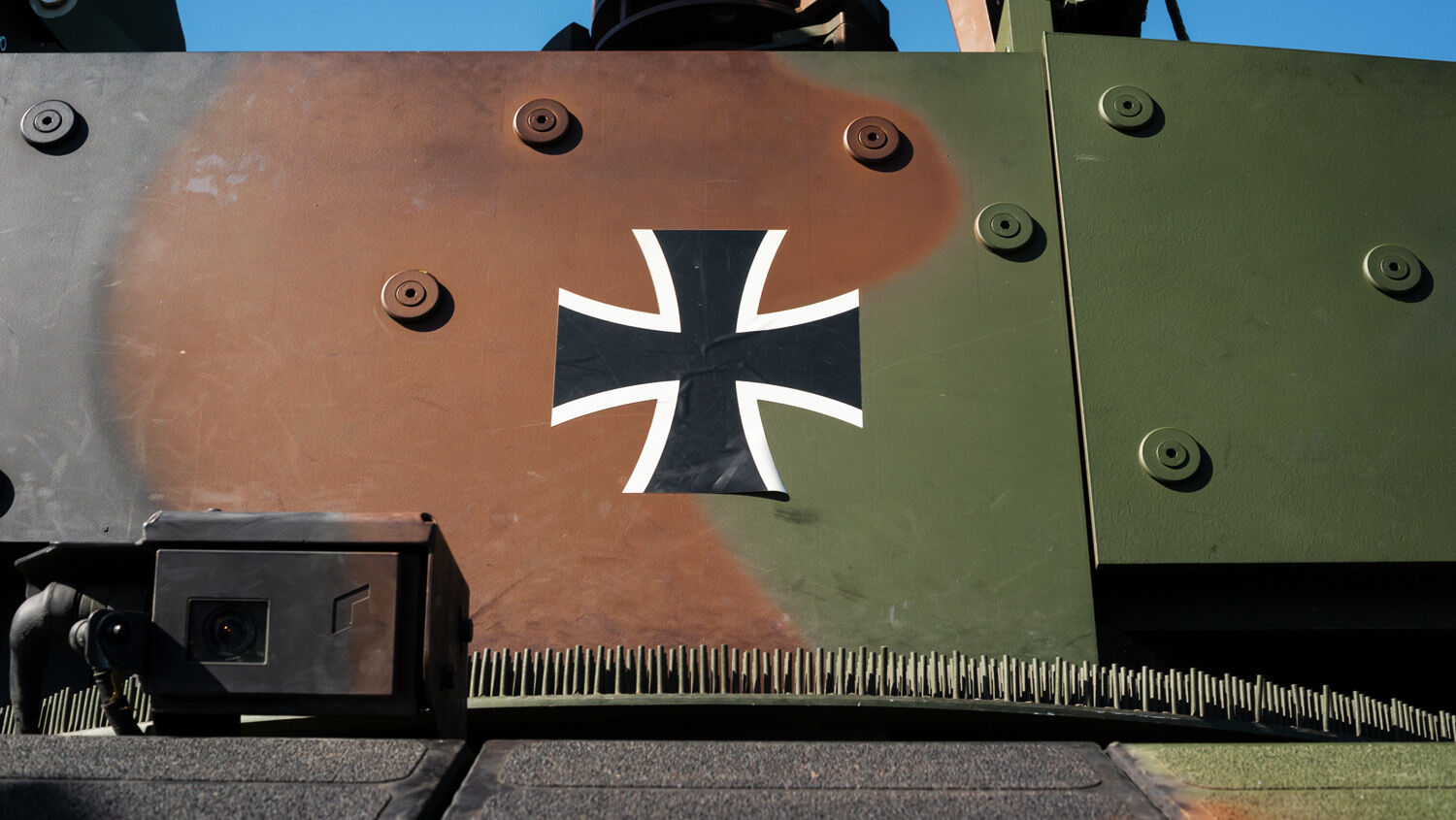 The German army and the ‘Christian’ cross

The German Bundeswehr’s Iron Cross has a long-standing tradition. “Tradition needs symbols, signs and ceremonials,” the federal army’s 2018 Guidelines on the Understanding and Cultivation of Tradition says. “They shape the image of the Bundeswehr in state and society. … In most cases, they emerged a long time ago. They are representative of the historical and military context that produced them or that is attributed to them.” The tradition of fighting under the symbol of the cross goes back further than Adolf Hitler, the Prussian Empire, the Crusades or Emperor Constantine. The symbol goes back long before the crucifixion of Jesus Christ.

The Iron Cross today is on German aircraft, combat vehicles, social media accounts and badges of honor. In 2010, Defense Minister Karl-Theodor zu Guttenberg awarded a special version, the Gold Cross of Honor, to soldiers who fought in active combat in Afghanistan. The ceremony was highly emotional. Zeit wrote, “As they receive the medal, a widow and a father whose son fell on Good Friday wept.” The fact that the Taliban attacked the troops on Good Friday was of special significance, according to Guttenberg. It represented a “mockery of foreign cultures,” he lamented. Good Friday is the day Catholics claim Christ was crucified on the cross that inspires the badge of honor’s symbol.

But the cross also harkens back to Adolf Hitler. The 2010 ceremony was the first time a medal for active combat was presented since the end of World War ii. Hitler gave many such awards, even to ordinary citizens such as exceptional mothers. This is part of the tradition the cross carries with it. “With the combat medal, the warlike element and the old warrior cult are indeed courted in the military—and that is to be regretted,” Detlef Bald, former director for military and society at the Social Science Institute of the Bundeswehr, told Tagesschau at the time. “One can see from this a new stage in the creeping militarization of the foreign policy of the Federal Republic.”

Various forms of the cross have dignified many soldiers and military equipment of the Nazi forces. Today’s armed forces, however, have only distanced themselves from one cross: the swastika. They say the Iron Cross had a long history before Hitler employed it. While this is true, the history and tradition aren’t any less bloody.

German author Wolf Stegemann wrote: “The black cross on a white background runs as a national emblem through the history of the Germans, especially through military history, starting with the Teutonic Order (from 1190), Prussia, the German Wehrmacht and finally the Bundeswehr. The cross stood as a Christian symbol in various city coats of arms such as Bonn, Kaiserswerth and Rheinbach.” Pope Innocent iii granted the Teutonic knights in 1205 the use of the black cross.

“In 1219, the king of Jerusalem granted the order the right to bear the cross of Jerusalem under the Teutonic’s black cross, thus creating a silver edge. This black cross with white outline was later to become the German iron cross,” as Jean-Denis Lepage noted in his book Medieval Armies and Weapons in Western Europe: An Illustrated History. Based on the Teutonic Cross, the Iron Cross was created in 1813 as a military medal, forbidden by the Allies in 1918, and reintroduced by Hitler in 1939.

The bloody history of this order is well remembered. Germany’s regional noz.de noted in 2018: “Cross and sword, bloody battles and charity, submission and mission: This is the image of the Teutonic Order in the Middle Ages. It was the first German and, after the Knights of St. John and the Knights Templar, the third-largest spiritual order of knights in the time of the Crusades; in the meantime, it ruled over its own state.” Today, the Teutonic Order is one of three orders subordinate to the pope; the order continues to wear a black cross on a white background.

But the history of fighting under the symbol of the cross goes back even further. Emperor Constantine was the first to employ the symbol in battle under the cloak of Christianity. Trumpet editor in chief Gerald Flurry explains in The True History of God’s True Church:

[O]n October 28, a.d. 312, an incredible change took place. On this date, Constantine defeated his chief rival and brother-in-law Maxentius (son of the old western Emperor Maximian) at the Battle of Milvian Bridge near Rome. This victory ensured Constantine’s sole rule over the empire in the west.

In an unprecedented move, Constantine sought a meeting with Miltiades, who was in charge of the local Christian groups in Rome. By this time, the bishop at Rome was generally accepted as the leader of Christianity in the western portion of the empire. The Roman bishop had also become unofficially known as the pope.

During this meeting, Constantine explained to the wary bishop of Rome that he was victorious because of divine inspiration. Just prior to battle, Constantine had seen a vision of a flaming cross in the sky. Above the cross were written the words “in hoc signo vinces” (“in this sign conquer”). Moved by the vision, Constantine had a cross imprinted on the standards and shields of his army. He fought the battle in the name of the Christian God. He believed this brought him victory over Maxentius.

This has caused many to believe the symbol of the cross traces back to the crucifixion of Jesus Christ. There is, however, ample evidence that the stake Christ was crucified on did not resemble a cross. In “The Cross: Pagan Symbol or Symbol of Faith?”, we write: “The New Testament does not specifically describe the instrument upon which Christ died, but the following accounts all use the Greek word xulon, which can be translated as ‘tree,’ but can also mean ‘a stick, club … or other wooden articles’ (Strong’s).”

The cross of Constantine, Hitler and Germany’s armed forces has nothing to do with true Christianity. It does, however, prove that Germany is the modern descendant of ancient Assyria and continues the tradition of the Holy Roman Empire today! (This truth is explained in detail in our free booklet Germany and the Holy Roman Empire.)

The symbol of the cross was used by the ancient Assyrian tribe Hatti, or Chatti. The January 1963 Plain Truth, under the direction of the late Herbert W. Armstrong, published images of “the ritual standard of the Hatti recovered through excavation,” as found in archaeologist Ekrem Akurgal’s book The Art of the Hittites. The Hatti “were the chief people who settled in modern Germany. Their descendants are the Hessians today! In fact, the Old High German spelling of Hesse was Hatti!” wrote the Plain Truth. The standard these peoples carried bore both swastika-like symbols and an iron cross.

Understanding this history helps you better understand Bible prophecy. But a key to understanding prophecy is knowing the identity of modern-day Israel—America and Britain today—as explained in The United States and Britain in Prophecy. The history of mankind has been prophesied in phenomenal detail, but there are also many prophecies yet to be fulfilled. One such prophecy is recorded in Revelation 17.

“And I saw the woman drunken with the blood of the saints, and with the blood of the martyrs of Jesus: and when I saw her, I wondered with great admiration” (verse 6). God’s true Church will be persecuted by a false church that claims to fight for Christ. As The True History of God’s True Church explains, this false church has caused empires and nations to commit untold bloodshed—often under the symbol of the cross. I encourage you to order a free copy of Mr. Flurry’s book if you are unfamiliar with this history. Also request The Holy Roman Empire in Prophecy.

The Bible prophesies that a final crusade is coming. It makes plain that Germany will lead this crusade. For this reason, it is incredibly significant that the German military today still fights under the Iron Cross.