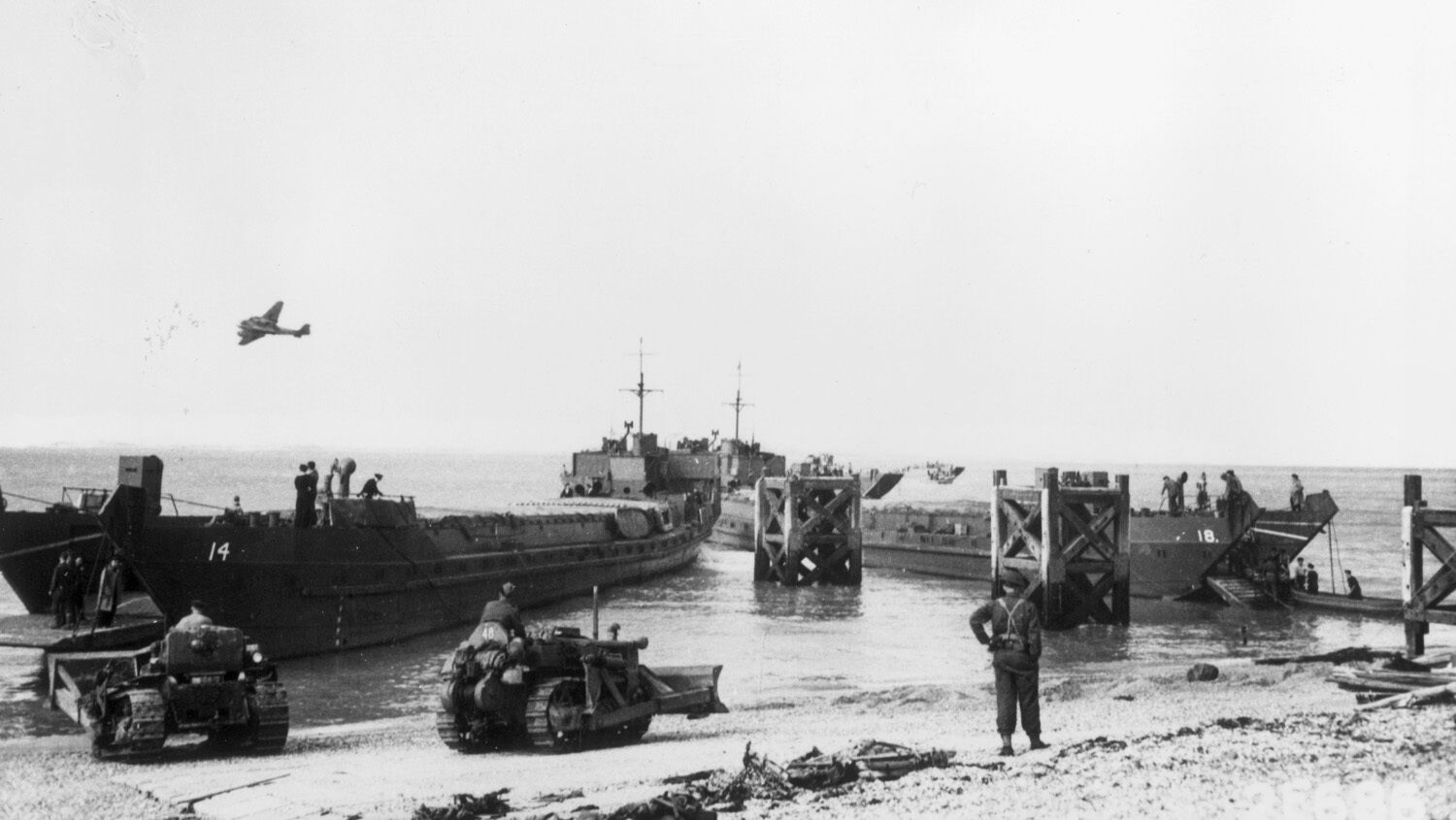 Armored vehicles used in the raid on Dieppe return to Britain.
Keystone/Getty Images

A disaster along the miraculous path to victory

“There is a tide in the affairs of men, Which taken at the flood, leads on to fortune,” remarked Brutus to Cassius in William Shakespeare’s Julius Caesar. This line of prose captures a vital truth of history: Events often flow in one direction, like a powerful, inevitable force influencing human affairs. But just like a tide, they can reverse direction. This is certainly true in war. Armed conflicts often follow cycles of battles favoring one side in a string of victories, and then the tide turns and the other side holds the advantage.

The history of a raid on the French coastal town of Dieppe, which occurred 80 years ago, perfectly illustrates the truth of the tide in the affairs of men and the tide in the outcomes of war.

“Defeats in war had to be expected, however, and, in 1942, defeat was the Allies’ portion,” writes J. L. Granatstein in Canada’s Army. Although Great Britain had staved off total defeat in 1940 and 1941 during the Battle of Britain, the Axis powers were on the march. The Soviets were being pushed back in the east, the Germans were poised to break through in Egypt and capture the Middle East, and Japan was threatening Hawaii and Australia.

The outlook was bleak, but the Allies were looking to take the offensive. Arthur Bryant wrote in The Turn of the Tide: “The prize was the initiative the enemy had enjoyed since 1939—the golden fleece of war.” The Soviets and Americans were exerting pressure on the British to attack northwest Europe in order to relieve pressure on the eastern front. British Prime Minister Winston Churchill and Britain’s military leadership approved a plan to raid the coastal resort town of Dieppe, France, which is about 43 miles east of Normandy.

When Canadian Lt. Gen. Harry Crerar heard rumors of the operation, he petitioned to make it an all-Canadian show to test the troops and improve morale. Lt. Gen. Bernard Montgomery, with operational command over southern England, had spent the previous year making the Canadian Army a professional fighting force with tough training; he consented to making Dieppe the first taste of war for the Canadians.

The 2nd Canadian Division was selected for the attack, which was comprised of the South Saskatchewan Regiment, Cameron Highlanders, Royal Hamilton Light Infantry, Essex Scottish Fusiliers, the Royal Regiment of Canada, and the Calgary Tanks (14th Tank Regiment). The plan was for a brigade of 5,000 men to land just before dawn on the beaches and take various strategic objectives, including the town of Dieppe itself. The Royal Marine Commandos would attack military installations on the flanks. They would hold the objectives for 24 hours and then disembark back to Britain. The operation was purely experimental in nature, and one of the first amphibious operations planned by the Allies.

Today we will look at the Dieppe Raid, also known as Operation Jubilee, which happens to be one of the most scrutinized raids of them all. And this one includes our Canadian friends. @CAFinUS pic.twitter.com/4rlmPnioMF

The original operation, named Rutter, was canceled in early July due to bad weather. Soon after, Montgomery went to the Middle East, and Adm. Louis Mountbatten ill-advisedly decided to try the operation again at the same location. It was decided that neither the Navy nor Air Force would soften the German defenses beforehand. It was renamed Operation Jubilee, and the Canadians boarded their ships on August 18. Almost immediately after the transports left port, everything went wrong.

A German flotilla ran into the invasion force and a brief sea battle ensued. With their cover blown, the invasion force continued and launched their landing craft, but most were running behind schedule. Nearly all of the Canadians landed after daylight broke, making them easy targets. The defending German 302nd Infantry Division was well entrenched with plenty of reserves.

If you had landed on the beaches that morning at Dieppe, you would have immediately recognized it was the worst possible location for an amphibious assault. The beaches at Dieppe are made up of golf ball-sized stones, making it difficult for men and tanks to gain traction up the steep beaches. Cliffs and fortified buildings dominated the approaches, and nearly all the men on the first wave died before making it to cover.

The South Saskatchewan Regiment landed on the west side of Dieppe under cover of darkness. Their objective was on the other side of a bridge, but they were pinned down by German gunfire. J. L. Granatstein writes:

At this point, the battalion commander, Lt. Col. C.C.I. Merritt, took charge and, walking calmly across the bridge under a hail of fire, led his men across by sheer force of will. “Come on over, there’s nothing to it,” the South [Saskatchewan’s commanding officer] called out, swinging his helmet in his hand and standing upright. Merritt led attacks up the hill, clearing several concrete emplacements with his own men and men of the Cameron Highlanders. …

Lieutenant Colonel Merritt commanded the rearguard that let the surviving South Saskatchewans and Camerons escape, but he was captured. Merritt—whose father had been killed during the Great War and who went overseas in 1939 wearing his father’s Seaforth Highlanders kilt and Glengarry—won the Victoria Cross for his extraordinary courage and leadership.

The bravery of the men could not overcome the many egregious errors in planning. Most objectives could not be achieved, and most men were not able to make it off the beach. “The Dieppe raid had turned into a disaster, a jubilee of death and destruction,” Granatstein writes. “Many of the men demonstrated great courage, and some great cowardice, but all suffered the same fate. … In all, 56 officers and 851 men died on the beach or later of wounds, 586 were wounded, and 1,946 were taken prisoner, more than in the entire campaign in Northwest Europe.” Dieppe was Canada’s greatest disaster of the war. The massive loss of life didn’t just affect the war and the 2nd Division, but generations of Canadians across the country.

Operation Jubilee is considered a failure. The Canadians lost nearly 2/3 of the forces they provided for the operation, with more succumbing to their injuries afterwards. Nearly 4,000 British and Canadian troops were killed in the Dieppe Raid. pic.twitter.com/hN5AkiZ5ec

“The appalling waste of life at Dieppe had long-lasting effects,” writes Granatstein. “The young manhood of Montreal, Toronto, Hamilton, Ottawa, Windsor, Calgary and in Saskatchewan, from Estevan, Weyburn and Bienfait, seemed to have been eliminated at a stroke. The [Royal Hamilton Light Infantry] company originally based at the Winona, Ontario, plant of E.D. Smith jams, for example, lost every man of fighting age, killed, wounded or captured—a devastating blow to a tiny town.” Dieppe remains a bitter memory for many Canadians but also a badge of honor for conducting themselves bravely in an impossible situation.

Dieppe was one of the last military disasters for the Allies. Immediately afterward, the tide turned in the war. In October 1942, General Montgomery went on the offensive at the Battle of El Alamein, breaking the German Africa Corps under Erwin Rommel forever. The Americans won at Guadalcanal, and the Russians were in the midst of winning the Battle of Stalingrad. They seized the initiative and never relinquished it.

When the Allies were planning Operation Overlord in 1944, Dieppe was in the back of their minds. The June 6 D-Day invasion was one of the most spectacular military successes in history. The costly lessons learned at Dieppe helped the success of the operation. But what was the major difference? A series of miracles made the Normandy invasion possible. In April 1947, the Daily Telegraph ran a story by Lt. Gen. Sir Frederick Morgan titled “The Miracle of D-Day.” He wrote: “[M]iracles happen still. … The German commanders were advised by their meteorological service that there could be no invasion in the period including June 6 because of continuous stormy weather. That is why D-Day forces landing during a brief break in the windiest month in Normandy for at least 20 years found so many German troops without officers, and why other enemy coastal units were having exercises at the time of the landing.” Everything went wrong in the raid of Dieppe, but God intervened to ensure victory on D-Day.

The tide of the affairs of men is controlled by God. Empires rise and fall; wars are won and lost. But it is all at the direction of God. Daniel 4:17 says that “the most High ruleth in the kingdom of men ….” Consider the statue depicted in Daniel 2. God revealed through that image the empires and kingdoms that would dominate throughout history. He also prophesied how they would fall. Trumpet editor in chief Gerald Flurry writes in Daniel Unlocks Revelation:

The Daniel 2 image didn’t just evolve! How did these great world-ruling kingdoms from the time of Nebuchadnezzar down to the time we now live in take shape like that image? The only way that is possible is if God shaped and molded it—to prove that He rules in the kingdom of men!

That image teaches the greatest lesson mankind could possibly learn.

God has given man 6,000 years to rule his own way, but He still makes certain that all events are shaped by His master plan. He forces events to shape the Daniel 2 image and work out His plan—He rules in the kingdom of men today.

God intervenes to guide events according to His plan outlined in Bible prophecy. This is the ultimate lesson from the raid in Dieppe, and the ultimate lesson we all must learn. The Allied victory in World War ii was the fulfillment of Bible prophecy and was also a warning. Prophecy indicates the tide will turn against America and the British Commonwealth in order to help us finally learn this all-important lesson.

To learn more, please read The United States and Britain in Prophecy, by Herbert W. Armstrong, and Daniel Unlocks Revelation.