‘Go to, let us build us a city and a tower, whose top may reach unto heaven’ —Genesis 11:4 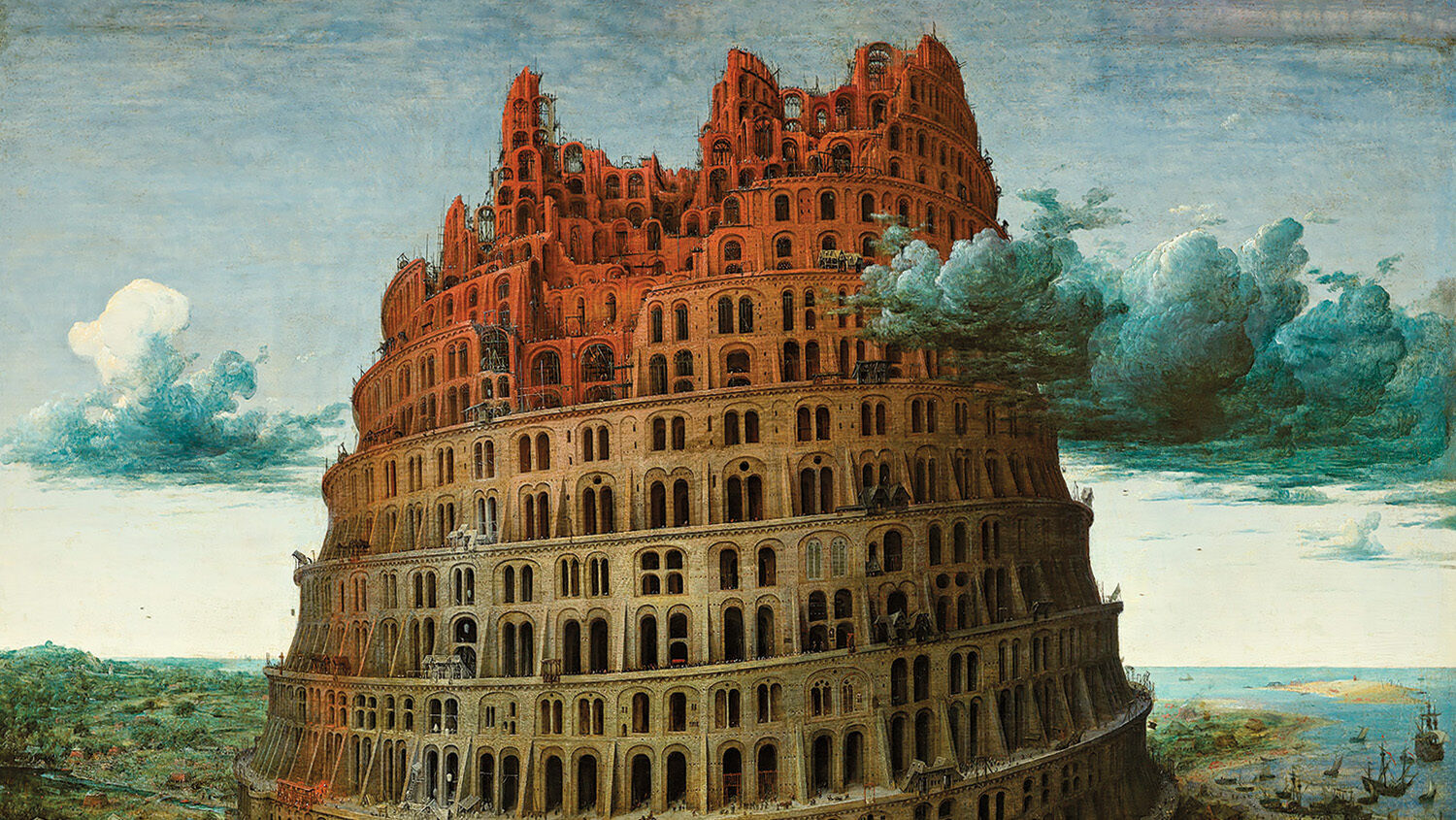 ‘Go to, let us build us a city and a tower, whose top may reach unto heaven’ —Genesis 11:4

The project is impossibly enormous. It sprawls across city blocks and beyond. It contains trillions of parts and counting, accumulated into one mountainous human effort. Its mass is seismic, its height is dominating, and it keeps growing. It’s a project best measured not in feet, miles or megatons, but in lives.

This is a description of the Genesis 11 tower of Babel, perhaps somewhat accurately captured in well-known illustrations like those of Peter Bruegel the Elder and others.

But it is also a description of human civilization itself, generation upon generation, course upon course, life upon life. The top level is the newest: an active layer of material, technology and human activity. From here, the view is spectacular. Looking down at the clouds below, and the world below that, as from the window of an aircraft, how can you be anything but dazzled at the civilization that built such a vantage point as this?

Here’s how: Look inside.

One generation atop another atop another has set over itself its elites and travailed under them, laying the walls, the arches, the beams of human history and stacking them high with lives of ignorance, confusion, poverty and affluence, failure, futility, fear, strife, murder and suicide, violence and war. When the mass sufferings reach a breaking point, new elites have arisen and pushed the masses into new tasks—and brought new suffering. The levels below us are catastrophically out of course, but we just pile on more of the same and keep building. This is not so much a metaphor. This is the human condition.

This is the very nature of human beings. No amount of oppression, suffering or death has caused us to stop worshiping our own human will. We exert our will on the less powerful, and the will of the more powerful is exerted on us by our chieftains, kings, politicians, dictators and other taskmasters. We oppress, raid, steal, dehumanize and mass-slaughter hundreds and thousands and millions because of our indestructible belief that human beings can rule ourselves. After all, we say, just look at our tower.

Human beings seem driven by a conviction, even if subconscious, that we are operating independently from our Creator—that, in fact, He may well want to destroy us, and that if we are to escape His punishment, we must do it together; we must make and submit to our human taskmasters, and we must build this tower. We will live our own way. How far will we take this belief? To the grave.

Here on the top floor, we are enjoying the view. But at this late stage of construction, the structure, out of plumb, out of level, yet ever taller, is swaying out of control.

Our elites—and we—are now actively demolishing those few strong columns our Creator gave us that still remain standing: man and wife, parents and children, ideals of human freedom and accountability. It is becoming clear, if we will just see it, that we and our elites are hopelessly, terminally underqualified to build our own lives, let alone civilization. Deadly serious world elites are now telling us to cover our faces (made in the semblance of our Creator); stay inside; subject our bodies to injections and other medical mandates; eat insects instead of meat; live in pods; let criminals go unpunished; believe lies about the distant and recent past; forfeit our liberty; own no homes, vehicles, or other personal property; tolerate, wear, ingest or implant surveillance devices; forfeit our children’s minds and sexuality; have no children at all, before or after they are conceived; have no family; give up our nationalities and eventually leave Earth altogether. No privacy, no freedom, no property, no family, no man or woman, no country, no Earth—no choice.

We could believe that our Creator made us for a purpose other than to destroy us. We could submit to His occasional punishment in order to better reach the potential He created humans to achieve, and live according to His will. Instead, we believe He must be resisted or denied altogether, and we must submit instead to the punishment, will and dehumanization of radical, destructive, insane elites who view us not as children of God but almost literally as ants.

Open your eyes. Our Creator is exposing to us the fundamental flaw not just of a particular political party or ideology or class but of human civilization itself. It’s time to see this tower for what it really is.

Mystery of the Ages
Did you ever ask yourself: “Who am I? What am I? Why am I?” You are a mystery. The world about you is a mystery. Now, you can understand!
From The September 2022 Philadelphia Trumpet
View Issue FREE Subscription
Previous