A 6,000-year experiment of epic proportions and a massive dose of aversion therapy 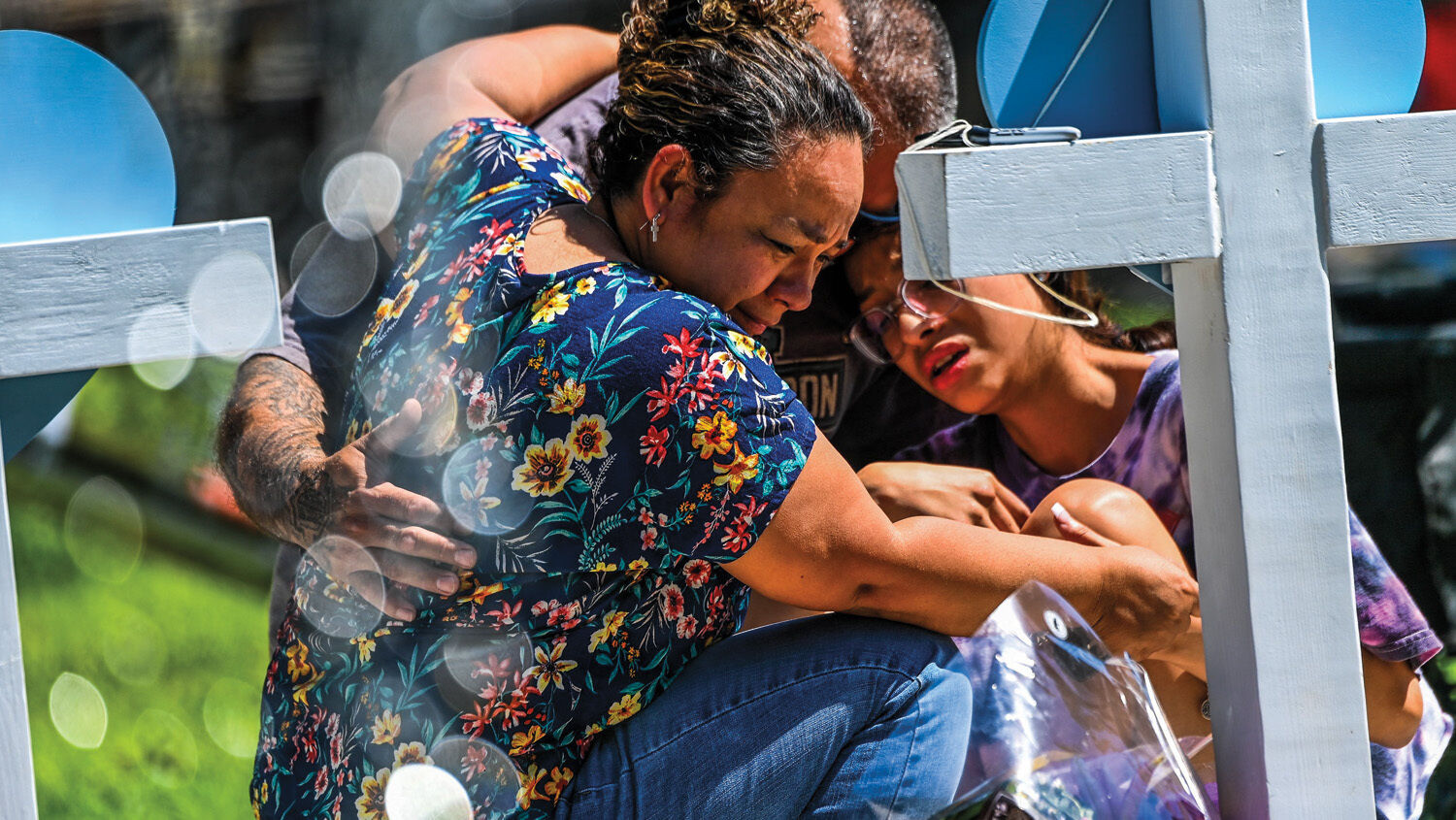 A 6,000-year experiment of epic proportions and a massive dose of aversion therapy

The human condition is dominated by human suffering. We have seen intense instances of this in the aftermath of recent mass shootings, war in Europe, lockdowns, forced vaccinations and more. But human suffering is everywhere—throughout the world and throughout human history.

People see the bodies of children in pools of blood and they stop believing in God.

Is it not fair to ask how a loving, all-powerful God could allow such horrific suffering?

How could this be God’s world?

Of all fields of human knowledge, religion should best be able to answer such difficult questions. But when we examine the answers religion offers, we are left even more confused. Most religions teach that God rules this world, and they don’t know why He allows such rampant suffering!

Christian churches teach that God is trying to convert the world today. That is why they engage in evangelism, missions, youth movements, church drives and politics, not to mention crusades, inquisitions and “holy” wars—past and future. They believe they are saving some from suffering, now and through eternity.

But think of the billions over the past 6,000 years who have lived and died never knowing Jesus Christ. If God is trying to save the world now, He must be failing miserably. How could a just God allow so many to suffer and suffer and then die forever, never having a chance for salvation? But this is exactly what the churches teach.

Note a few scriptures that challenge this view. In Galatians 1:4, the Apostle Paul refers to the age in which we live as “this present evil world.” In 2 Corinthians 4:4, he refers to Satan the devil as “the god of this world.” In Revelation 12:9, the Apostle John says that Satan “deceiveth the whole world.”

If God is struggling against Satan to save this world now, these verses reveal God to be losing the battle. Is that what is happening today?

To get real answers to these questions, we must set aside preconceived ideas and prejudices and let God speak for Himself!

God has not left us without answers. He clearly reveals in the Bible why we suffer.

God created man perfect physically (Genesis 1:31), yet unfinished spiritually. God offered man His Holy Spirit, which, when combined with man’s human spirit, would have completed his spiritual creation (Romans 8:16; 1 Corinthians 2:9-11). But Adam rejected God’s Spirit when he disobeyed God, followed his wife, and partook of the tree of the knowledge of good and evil.

Most people are familiar with the story of Adam and Eve but have never understood its true significance. The foundation of human civilization was not about two fruit trees—it was about two ways of life.

The tree of life represented living God’s way as led by His Holy Spirit. By obeying God’s commands, Adam could have partaken of the tree of life and received God’s Holy Spirit (Acts 5:32). This would have given Adam the power to think like God—to have a godly relationship with his Creator and with his fellow man. It is this attitude, not an actual piece of fruit, that would have led to joyful, eternal spiritual life. Romans 8:10 refers to God’s Spirit as life. This spirit-life comes only as a gift from God (Romans 6:23).

The tree of the knowledge of good and evil represented human reasoning, influenced by Satan. In taking from this symbolic tree, Adam and his offspring willingly subjected themselves to the seductive and deceitful spirit of Satan (Ephesians 2:2).

By taking from this wrong tree, Adam cut his descendants—all of mankind—off from having access to God and His Spirit. This is the path Adam chose. Genesis 3:22 and 24 explain the outcome of Adam’s rebellious decision: “And the Lord God said, Behold, the man is become as one of us, to know good and evil: and now, lest he put forth his hand, and take also of the tree of life, and eat, and live for ever …. So he drove out the man; and he placed at the east of the garden of Eden Cherubims, and a flaming sword which turned every way, to keep the way of the tree of life.”

Mystery of the Ages author Herbert W. Armstrong wrote that when Adam made his fateful decision, God said, in effect, “You have made the decision for yourself and the world that shall spring from you. You have rejected me as the basic source of knowledge—you have rejected power from me through my Spirit to live the righteous way—you have rebelled against my command and my government—you have chosen the ‘getting,’ ‘taking’ way of Satan. Therefore I sentence you and the world you shall beget to 6,000 years of being cut off from access to me and my Spirit—except for the exceedingly few I shall specially call. And that few shall be called for special service preparatory for the Kingdom of God. They shall be required to do what you have failed to do—reject, resist and overcome Satan and his ways, and follow the ways of my spiritual law.

“Go, therefore, Adam, and all your progeny that shall form the world, produce your own fund of knowledge. Decide for yourself what is good and what is evil. Produce your own educational systems and means of disseminating knowledge, as your god Satan shall mislead you. Form your own concepts of what is god, your own religions, your own governments, your own lifestyles and forms of society and civilization. In all this Satan will deceive your world with his attitude of self-centeredness—with vanity, lust and greed, jealousy and envy, competition and strife and violence and wars, rebellion against me and my law of love.

“After the world of your descendants has written the lesson in 6,000 years of human suffering, anguish, frustration, defeat and death—after the world that shall spring from you shall have been brought to confess the utter hopelessness of the way of life you have chosen—I will supernaturally intervene. By supernatural divine power I shall then take over the government of the whole world. With reeducation, I will produce a happy world of peace. And on repentance, I shall then offer eternal salvation to all. After a thousand years of that happy world to come, I will resurrect from death to mortal life all who have died uncalled during this present 6,000 years. Their judgment shall then come. And on repentance and faith, eternal life shall be offered them.

“During this 6,000 years, when I myself shall cut them off from me, they shall not be eternally judged. Only, as they sow during their lifetimes, they shall reap. But when I open eternal salvation to them, there shall be no Satan to hinder or deceive them—no Satan for them to overcome. Those few called during this first 6,000 years shall have to reject and resist Satan’s pulls and overcome. But those who overcome shall sit with me in my throne, and have power under me to rule all nations under my supreme rule.”

Mr. Armstrong referred to this 6,000-year “lesson” man is recording by his own experience as aversion therapy. Some clinics still employ this method of therapy to help people overcome addictions. If a person is an alcoholic, for instance, he would be forced to drink alcohol until it made him so sick that he would never want another drink!

In a sense, that is what God is doing with this world. He is not forcing us to go the way of Satan, but He is allowing us to fill our minds full of Satan’s way of life. God is allowing it to bring us to the point where we will absolutely loathe and abhor this “present evil world.” He is allowing man to go his own way so that he might see the fruits of living contrary to God’s law of love.

The evils of our present generation are like those of Noah’s day, when every imagination of the thoughts of man “was only evil continually” (Genesis 6:5).

The Bible prophesied these same immoral conditions would be widespread in the end time: “But as the days of Noe [Noah] were, so shall also the coming of the Son of man be” (Matthew 24:37). In Noah’s day, the masses mocked God’s warnings until the floodwaters came and “took them all away” (verse 39).

This is our time. Lurching from one terrible crisis to the next, most people again ridicule God’s warning message. But that will not alter the prophesied outcome: “For then shall be great tribulation, such as was not since the beginning of the world to this time, no, nor ever shall be. And except those days should be shortened, there should no flesh be saved: but for the elect’s sake those days shall be shortened” (Matthew 24:21-22).

This will be the end result of man’s rebellion against God, which began with the first man nearly 6,000 years ago. Once the culmination of human rebellion and human suffering comes, mankind will recognize the horrible results of his 6,000-year experiment of rejecting God. Finally, man will be fed up with all the evils and sufferings he has brought upon himself. Finally, man will want to seek after God and His way of life.

The lesson in aversion therapy will have served its purpose. Jesus Christ will return. He will remove Satan from ruling mankind. At that time, as well as through a later resurrection of all who have ever lived never knowing God, He will reopen to all mankind the same choice that He gave to Adam: Rebel and choose the tree of the knowledge of good and evil, which leads to suffering and death, or submit and choose the tree of life, which leads to the incredible human potential.

Mystery of the Ages
Did you ever ask yourself: “Who am I? What am I? Why am I?” You are a mystery. The world about you is a mystery. Now, you can understand!
From The September 2022 Philadelphia Trumpet
View Issue FREE Subscription
Next
Previous