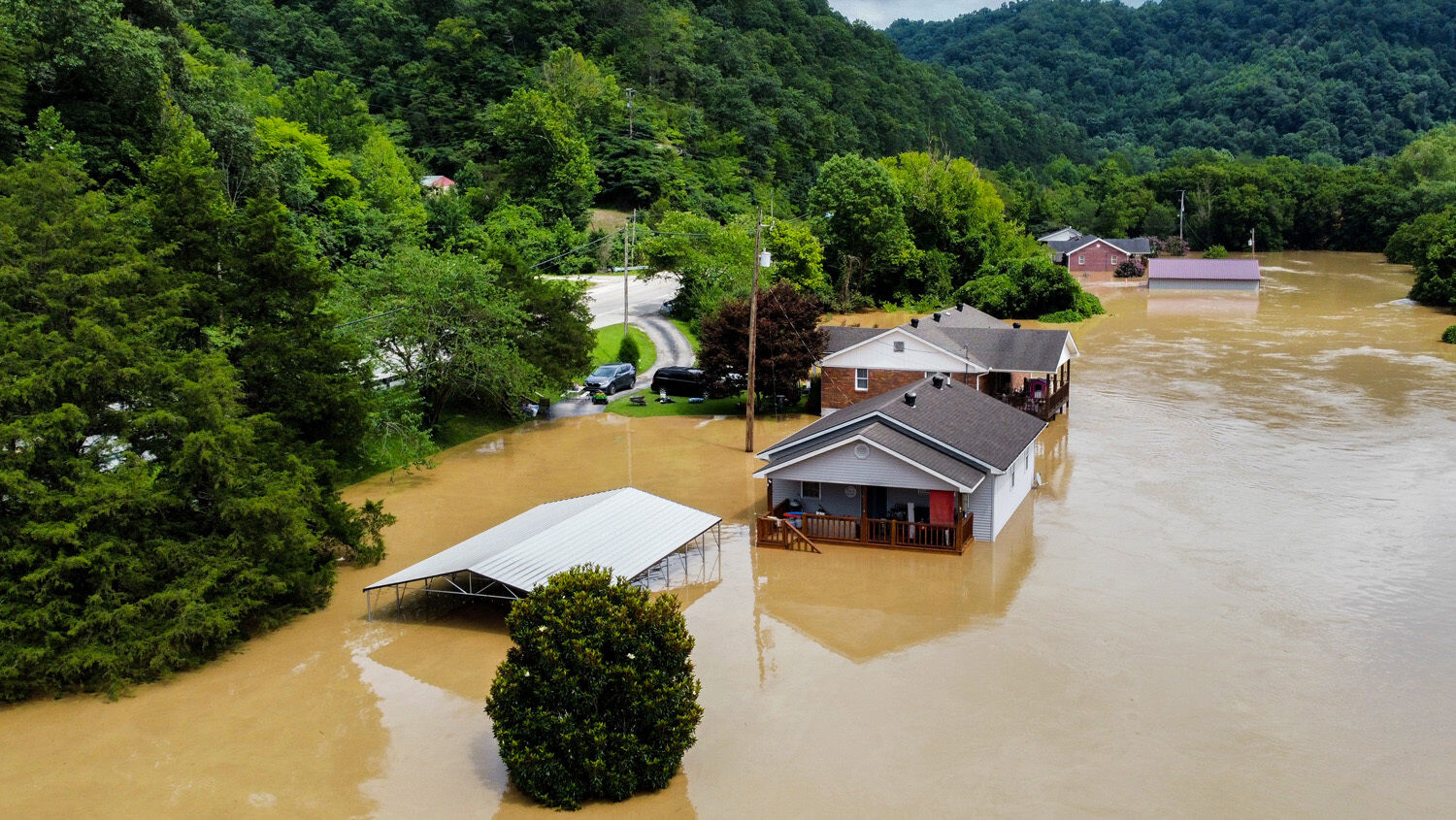 Homes are flooded with water from the North Fork of the Kentucky River on July 28, 2022.
Arden S. Barnes/For The Washington Post via Getty Images

It is irrefutable that weather disasters are getting worse. But what is the real cause?

At least 37 people are dead after heavy rains last week quickly turned into some of the worst flooding Kentucky has ever seen. Beginning on July 27, Kentucky was inundated with 14 to 16 inches of rain over just five days. Rivers were flooded. The north fork of the Kentucky river reached its highest peak in 95 years.

A stationary storm front settled across Kentucky for days on end. With Kentucky’s rugged, mountainous terrain, the front found the perfect home. It became what is known as a training thunderstorm. Such storms form repeatedly in the same region over a short space of time. The result was up to 4 inches of rain per hour, most of which came at night.

Most of Kentucky’s residents live in the valley floodplains, the only suitable flatlines for building. All of these factors led to the “perfect meteorological setup” for the catastrophic floods that took place, Marshall Shepherd, director of the Atmospheric Sciences Program at the University of Georgia, told abc News.

Thousands of residents have been displaced. Dozens are injured. Water, electricity and cell service have been knocked out in several areas. Homes and businesses have been destroyed. “I’ve lived here in this town for 56 years,” Tracy Neice, the mayor of Hindman, Kentucky, told cnn, “and I have never seen water of this nature.” He went on to say that his town’s main street looks like the whitewater rapids of a river.

Most of the areas had never flooded before in the modern era. So, several residents didn’t have flooding insurance. The future is looking bleak for many families, some who have lost children as young as 2 years old in the flooding. And in the aftermath, 100-degree temperatures are only compounding people’s misery.

Sadly, such events are only going to become more common. Scientists usually term floods as 1-in-100-years events. But they are occurring so regularly now, they are considering changing the term to reflect the increased frequency. And they blame climate change. “We have warned for decades now that as our climate warms, there’s more water vapor available to these storms,” Shepherd said. And yet the Pacific Northwest, one of the wettest regions in the country, is experiencing “abnormally dry” conditions, with 58 percent of the region in drought. The math doesn’t add up.

Whenever there is an extreme event, climate change is blamed. Climate change has become a catch-all explanation. It is an inconsistent, unpredictable, fluid explanation, capable of adapting to every disaster with no rhyme or reason. And that’s the point. That’s what makes it so dangerous, climate change proponents argue. But there isn’t even consensus among the scientific community. John Coleman, the founder of the Weather Channel, calls it a hoax.

But it is irrefutable that weather disasters are getting worse. Areas like eastern Kentucky that have never really flooded before in the modern era are experiencing historic floods. Areas that are usually the wettest are experiencing drought. What is going on? Our booklet Why ‘Natural’ Disasters? explains:

When climatic disasters occur, the usual political and media response is to blame the trend on “climate change.” The worse the disaster, the louder the calls for taking action against climate change by addressing the supposed man-made causes, such as carbon emissions and the use of fossil fuels.

This view about “climate change” has taken hold of millions of minds around the world. It is often presented as if it is irrefutable scientific fact. The truth, though, is that it is an ideology, and it will negatively affect every single person who falls for it!

Human activity does cause weather-related problems. The environment is harmed by the industrial release of synthetic compounds, the replacement of forests with cities and asphalt, and the gaseous release from the exhaust of cars, planes and trains. But the real reason for these natural disasters is far more significant and spiritual in nature.

This mainstream and almost universally accepted threat of climate change is a deadly deception! The idea that greenhouse emissions are primarily responsible for all these terrible disasters is the exact opposite of what God says.

Some might scoff at the idea of God dictating planetary weather patterns. But that’s the only reasonable and logical explanation. Many often ask why God allows such disasters to strike. Some believe that disasters themselves are proof that there is no God. Yet the Bible shows that God has power over the rain, He can “dry up all the rivers,” and He has control over storms (Nahum 1:3; Job 38:28; Amos 4:7). How God exercises this power, however, is dependent on mankind’s obedience or disobedience to His laws.

Notice Leviticus 26:3-4: “If ye walk in my statutes, and keep my commandments, and do them; Then I will give you rain in due season, and the land shall yield her increase, and the trees of the field shall yield their fruit.” However, God warns in verses 14, 19 and 20: “But if ye will not hearken unto me, and will not do all these commandments …. I will make your heaven as iron, and your earth as brass … your land shall not yield her increase, neither shall the trees of the land yield their fruits.”

God clearly outlines the cause and effect: Disobedience to His commandments is the cause; extreme weather disasters are the effect. Our booklet explains, “One reason God sends storms is for correction. Yes, sometimes God bathes the earth with gentle rain to show His loving concern and mercy—and other times God uses the weather to correct people! Do you believe in that God?”

God cares about the conditions of our planet. He condemns those who defile the Earth (Jeremiah 2:7; Revelation 11:18). But He is even more concerned with our other sins. Society is being flooded with pornography, violence, illicit sex, drug abuse and many other problems. It is because of these issues that God mobilizes the weather to punish mankind.

When we blame these disasters on man-made climate change, it blinds us to the real problem. It is only when the real problem has been identified that an effective solution can be enacted. Repentance toward God is the only solution. Please request our free booklet Why ‘Natural’ Disasters? to learn more.