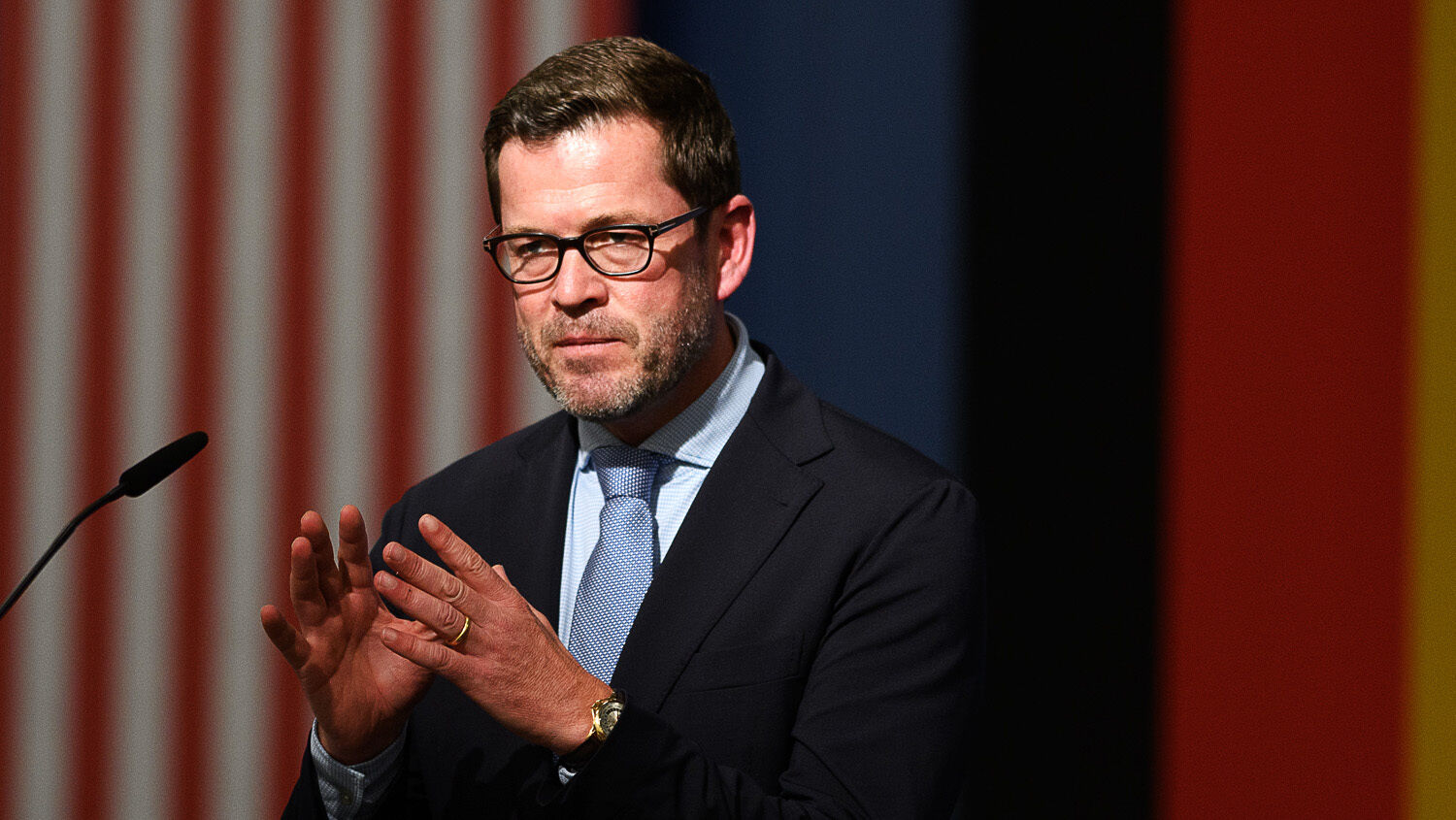 It’s a perfect time to reform the EU.

In the midst of culminating crises, Europe has a short window of opportunity to unite in a powerful way. That’s how former German Defense Minister Karl-Theodor zu Guttenberg summed up the Continent’s upcoming dilemma in a discussion during the July 27 to 30 Salzburg Summit. While the United States focuses on midterm elections, the “thin ice” of Europe’s unity threatens to break in truly unprecedented crises, Guttenberg warned, unless major reforms are introduced. The European Union’s moment of truth has come. It will either be transformed into a powerful superstate or fall into oblivion.

While speaking with former Austrian Chancellor Wolfgang Schüssel and former Munich Security Conference chairman Wolfgang Ischinger, Guttenberg warned of “ballooning” crises “the likes of which we haven’t had before” (Trumpet translation throughout). He said he fears the EU will reach a “breaking point” this fall.

“We have a Ukraine crisis that has certainly not yet been resolved. We have … a looming recession. We have inflation. We cannot rule out the possibility that the looming worldwide food crisis with regards to Ukraine will again give rise to refugee flows. All this with a probably resurgent pandemic will trigger a lot, but not reassurance in the population,” Guttenberg warned. “The moment people see that gas prices are still up and that we might freeze this winter, the European Union will be put to a greater test than we can even imagine at the moment.” According to Guttenberg, this will lead to calls for appeasement with Russia and threaten European unity.

He also alluded to Italy’s political and economic uncertainty, the EU’s struggle with internal unity, and a short-lived trans-Atlantic partnership. The U.S., he warned, will go internal due to the upcoming midterm elections followed by presidential election campaigning.

“For us, the best-case scenario would be that we would have another trans-Atlantic [president] in office, possibly an incumbent or a successor. But we just have to factor in the possibility that we either get back one that we’ve already had to learn to fear,” Guttenberg said. “I’m talking about Donald Trump.” He then indicated that a potential Ron DeSantis presidency may be even worse.

Guttenberg expressed great hope that the EU has finally reached the moment to undergo major reforms. He suggested: “We should put much more effort into suddenly becoming aware of the existing realities of concentric circles in the EU and adapt the treaties to them. … The majority principle is one that I very much support and not in the timid variant.” A stronger more powerful EU that can master its approaching crises needs decision makers. When 27 nations quarrel over what the future should look like, little-to-nothing gets done. But if fewer people make the decisions and ignore criticism, the EU can move ahead.

Guttenberg has long demanded a stronger, more capable European superstate. Germany is the most logical leader of this rising empire. But Guttenberg also fears that his home country is failing to step up to the challenge.

In a July 28 interview with cnbc, Guttenberg called Germany’s current role in fixing the crises “embarrassing.” “We heard a rather bombastic speech on February 27 by the new chancellor of Germany proposing a lot of things that should have happened by now. Yes, we have delivered a few things. … But it’s certainly not enough as compared to what he has actually put into his speech at that time.”

Guttenberg believes that the EU needs to be reformed this fall. Other geopolitical analysts agree. Geopolitical Monitor wrote:

In a nutshell, the Germans are facing a complicated dilemma. They cannot recover their strategic independence from the U.S. because they do not have their own autonomous nuclear deterrent, and they also lack a powerful military. Likewise, getting rid of Russian energy supplies would be problematic and the potential substitutes are imperfect, costly and partial. Of course, Germany is an industrial powerhouse so, if it wants, it has what it takes to develop a nuclear weapons program, a stronger military, and a more diversified energy infrastructure. However, the Ukraine War and its shockwaves are literally accelerating the course of history and the Germans are running out of time. For instance, the [United Kingdom] is promoting the establishment of a new security alliance of European states that share three common denominators: a fierce opposition to Russia, a strong Altanticist strategic orientation, and a distrustful view of Germany.

Decisions must be made, challenges must be faced, and costs will have to be paid one way or another. Berlin needs to assess its situation and play its cards wisely. If an inertial trajectory prevails, a Weimar-like disaster is conceivable. Now that history is back, Germany can have either the American security guarantee or the comfort of being a wealthy industrialized economy; but it will not be able to enjoy both at the same time anymore. Such convenience can no longer be taken for granted. In fact, the status quo that favored the Germans until recently is gone and existing partnerships will not do the trick. Since overreliance on others can backfire, the Germans will be pretty much on their own now. Therefore, Berlin’s best move would be to assume a much more autarkic, proactive, and assertive role on the world stage in accordance with the full weight of its national power. Otherwise, it will fade into oblivion as its fate is determined by external stakeholders. Being at the mercy of others is obviously dangerous for any rational state, particularly in times of trouble. Hence, the Germans will probably soon experience a rude awakening whose consequences will be felt for generations to come. The clock is ticking.

Indeed there appears to be a small window of time to act before Germany and the rest of Europe go down into oblivion. Guttenberg believes that Germany has the power to change this—but it lacks the leadership to push through its goals. So, who will save the European project from succumbing to the rising crises and lead a European superpower?

The Trumpet has been warning for decades that in a time of crises, not unlike the one Guttenberg described, a strong German leader would rise to hijack the EU. The Bible reveals in Daniel 2 and 8 and Revelation 17 that a strongman will unite 10 nations, or groups of nations, to lead them in a final world conflict just before Jesus Christ returns. “And the ten horns which thou sawest are ten kings, which have received no kingdom as yet; but receive power as kings one hour with the beast. These have one mind, and shall give their power and strength unto the beast. These shall make war with the Lamb, and the Lamb shall overcome them: for he is Lord of lords, and King of kings: and they that are with him are called, and chosen, and faithful” (Revelation 17:12-14).

In light of these prophecies, the late Herbert W. Armstrong, editor in chief of the Plain Truth, the Trumpet’s predecessor, noted a few scenarios that will likely lead to this unification: economic turmoil, the fear of Russia, the rise of a strongman, and the reemerging influence of the Catholic Church. (Request a free copy of He Was Right to learn more.)

Given Guttenberg’s political background, his warnings about Russia, his interest in financial technologies and his Catholic upbringing, the Trumpet has repeatedly noted that he will most likely be the man to lead Europe’s political and military unification. While Guttenberg denies any desire to take political responsibility, his criticism of the current government and sharp analysis may suggest otherwise.

The ballooning of the very crises Mr. Armstrong warned about along with the rise of the man that the Trumpet has drawn attention to may be a strong indication that the fulfillment of major prophecies is just around the corner.

The details of these prophecies and why we have focused on one particular man is explained in “Is KT zu Guttenberg About to Come to Power?” by Trumpet editor in chief Gerald Flurry.