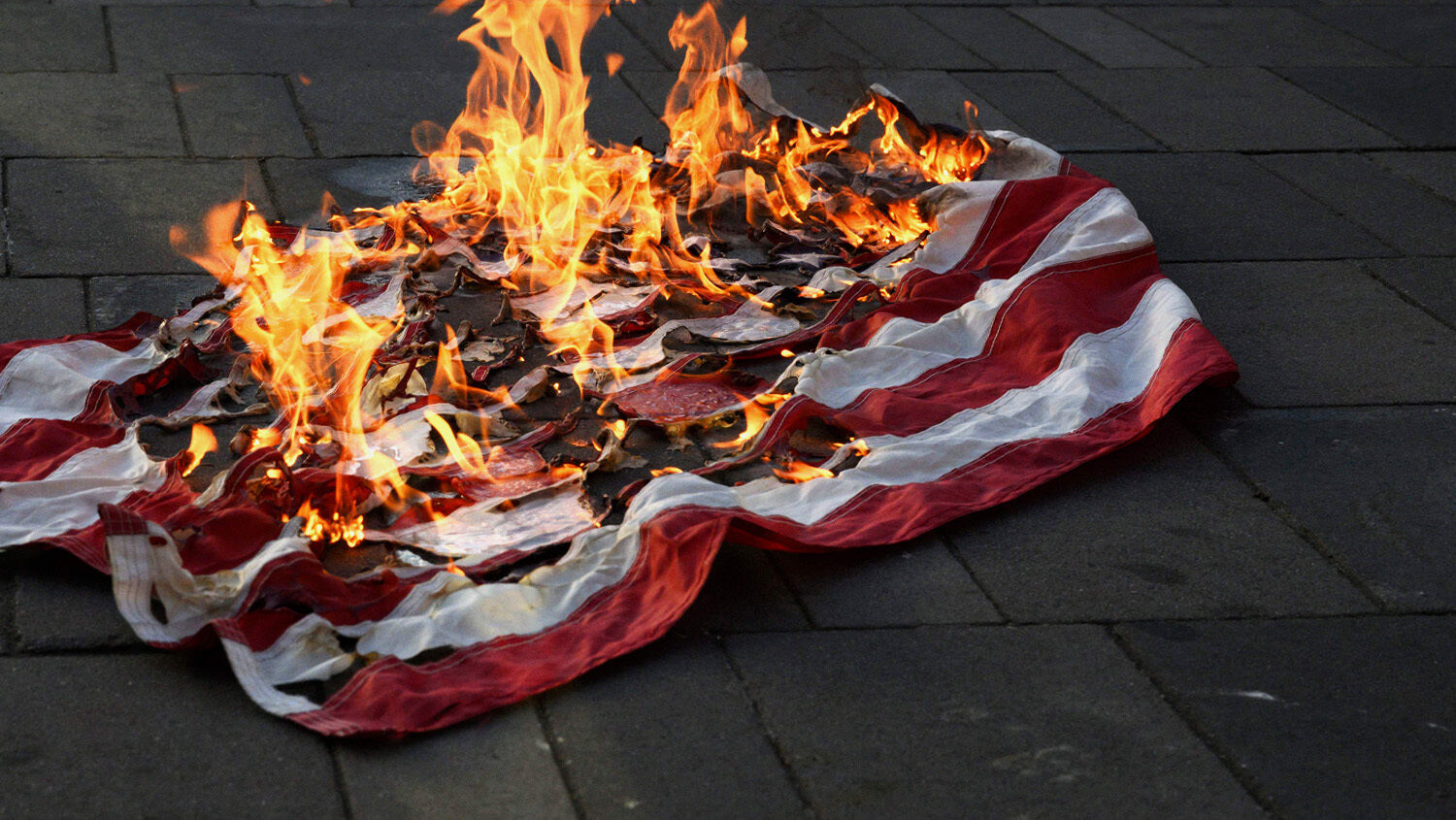 A U.S. flag is set on fire as demonstrators protest the killing of Jayland Walker, shot by police, outside Barclays Center in New York, on July 6.
ANGELA WEISS/AFP via Getty Images

Some in the media label predictions of civil war sensational or even dangerous. But the facts speak for themselves.

More than 50 percent of Americans believe that “in the next few years, there will be civil war in the [United States],” according to a new study, published July 20. Researchers at the University of California–Davis conducted a survey of 8,620 adults about deepening divisions in the country. Their stance and questions primarily leaned to the left; however, the findings highlight some very real problems.

Over 60 percent of respondents saw a “serious threat to our democracy.” As a result, they believe that a civil war is imminent. Both sides of the political divide believe there is some kind of threat to democracy. But both believe that the other side is that threat.

The Trumpet regularly reports on the facts, nature and cause of America’s division. We often write about the radical left and its attack on law and America’s heritage (for more on this, request your free copy of America Under Attack). Former President Barack Obama said that he wanted to “fundamentally transform” America.

As a result, the country is now largely at an impasse. Many Americans passionately believe America is evil. They ardently support the lgbtq movement, communism and critical race theory. The Black Lives Matter protests show how easily this passion can turn into violence.

Many other Americans love their country. They extol their history and the Judeo-Christian values America was founded on. They have been less likely to protest violently, despite what the January 6 committee claims. But the longer the attack on America goes, the more likely this will change.

That’s where the study results become even more worrying.

A fifth of respondents said they are ready to be “armed with a gun” in anticipation of a coming conflict. Four percent said it is likely that they would “shoot someone with a gun.” Extrapolated out to the current gun-owning American population, this would amount to 4 million people. As divisions deepen, such figures are only likely to grow. Eighteen percent agree or strongly agree with using violence or force to “protect American democracy” when “elected leaders will not.” Twenty percent believe political violence is sometimes justifiable. This is true of people on both sides of the political divide.

Over 600,000 people died in the U.S. Civil War. That is more Americans than were killed in both world wars combined. A modern-day civil war would have far more casualties.

Some in the media label predictions of civil war sensational or even dangerous. Most Americans aren’t clamoring for violent conflict; many just want to get back to their lives and enjoy their creature comforts. But the facts speak for themselves. Regardless of truth, both sides believe they are right. Neither side is willing to back down. And more and more people are willing to turn to violence in order to deal with these irreconcilable differences.

On June 16, 1858, Abraham Lincoln said in a speech, “A house divided against itself cannot stand.” That was a direct quote from Jesus Christ that Lincoln applied to the very divided United States of America. …

Lincoln foresaw great peril for America. He knew it would take a crisis for the nation to learn that “a house divided against itself cannot stand.”

That crisis came. The tension and division in America in the middle of the 19th century erupted into a protracted, bloody conflict lasting more than four years. The Civil War cost 620,000 American lives—more deaths than all other American wars combined.

The bitter division in America today is leading to another civil war that will be 10,000 times worse!

The Bible reveals where all of this is leading. It prophesies violence, rioting and suffering on a level that America has never seen before. God inspired the Prophet Ezekiel to write, “Make a chain: for the land is full of bloody crimes, and the city is full of violence. … Destruction cometh; and they shall seek peace, and there shall be none” (Ezekiel 7:23, 25).

Unless mankind changes its course, division and violence within will weaken America to the point that it is susceptible to attack from without. This suffering will be necessary to reconcile mankind to his Creator. Mr. Flurry wrote in “America’s Coming Civil War,” “We can no longer ignore what we have reaped by giving ourselves over to sin. This is a reckoning! The good news, though, is that the destruction about to sweep over us is all for a purpose. It is precisely measured, and it is purposeful. It is preparing our people to come to know God!”

To learn more about the prophesied violence and the inspiring future soon after, request a free copy of Mr. Flurry’s book America Under Attack.