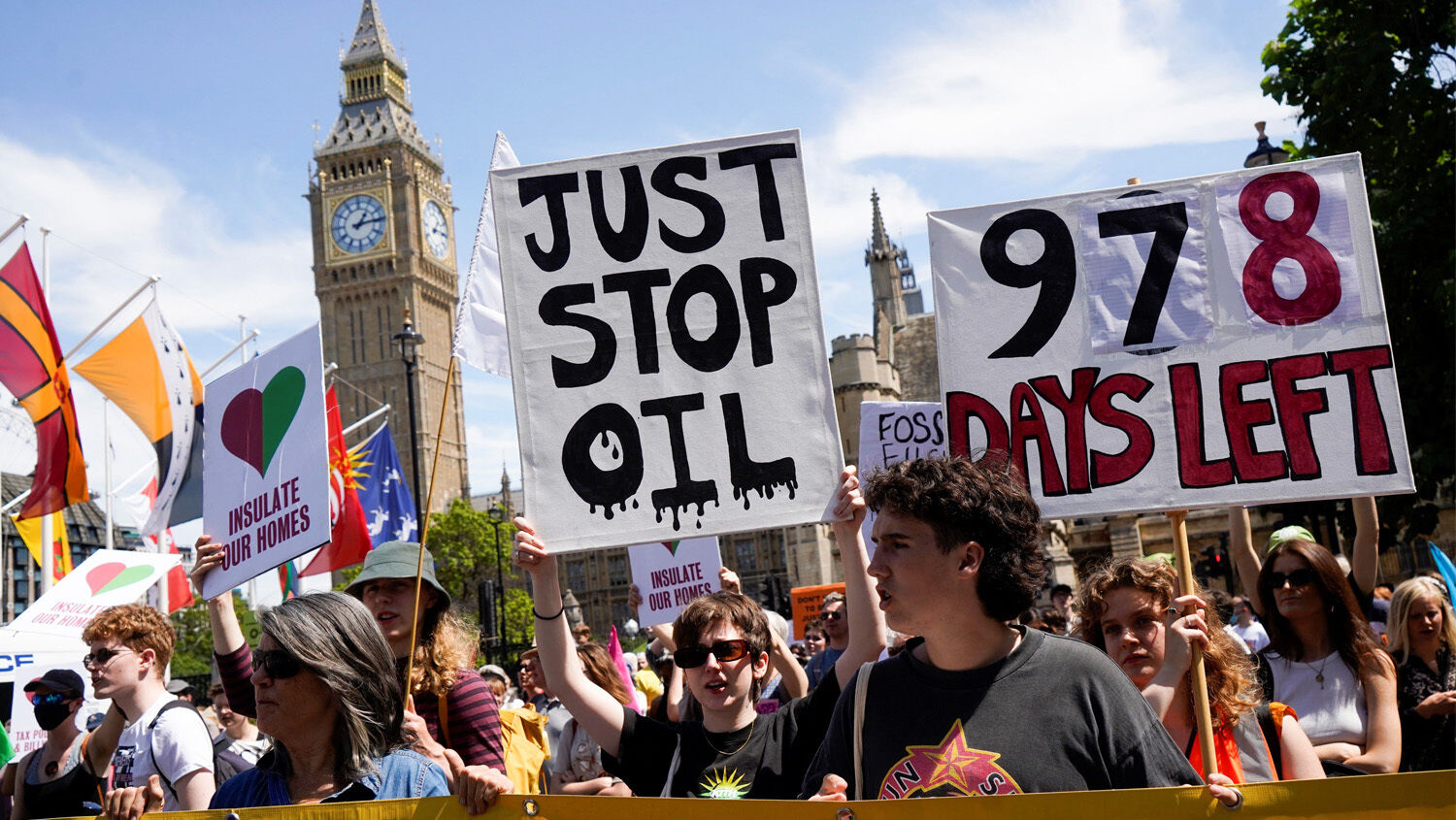 Demonstrators hold placards reading messages against the use of fossil fuels as they take part in a protest march arriving at Parliament Square, in London, on July 23 to demand action over the cost-of-living crisis and the climate change crisis.
NIKLAS HALLE’N/AFP via Getty Images

This time last week, panic gripped Britain. An unfamiliar yellow orb appeared in the sky. The government sprang into action. Motorway signs warned people to stay home. London’s major train stations shut down. The mayor told its citizens they should not be outside enjoying themselves or hosting barbecues. Offices told their staff not to come in. Even some schools closed.

Yes, a sunny day can seem like a rare occurrence here in the United Kingdom. But I’ve never seen such a panicked response to hot weather. The Met Office warned that people could not be trusted to make good decisions about the heat because “nothing in their life experience has let them know what to expect,” before sternly forbidding the nation from having fun in the sun. News channels broadcast live images of the sun, as if it were some kind of disaster zone.

Britain did set a new record: 102 degrees Fahrenheit. But we’ve had days nearly that hot many summers before. And it’s certainly no hotter than holidaymakers are used to experiencing abroad.

The United States administration is trying to stir the nation into a similar tizzy, though with less success. There, the administration is laying the groundwork for Joe Biden to declare a “climate emergency.” The National Emergencies Act allows the president to act without congressional approval under certain circumstances. It makes sense in case of an earthquake—less so for a theory that mankind is gradually altering the Earth’s climate.

When Donald Trump invoked the act to try to solve the crisis on the U.S. southern border, the New York Times reported: “Declaring a National Emergency Could Give Trump Authoritarian Powers.” Strangely, they don’t seem as concerned this time around.

Some have noted the similarity in the UK to lockdown. Something out of the ordinary approaches, and suddenly we demand a heavy-handed government response to save us. I think there’s some truth to that. Sadly, as a society we have a horribly skewed relationship with risk—none must be allowed, no matter what the consequences. The Spectator wrote that during the heat wave, “[w]e didn’t quite get to the stage where the police were handing out on-the-spot fines to anyone more than 5 miles from their home, but it may only be a matter of time.” If the Met Office is warning that we don’t have the capability to make our own decisions about what we do in hot weather, then weather lockdowns would be a logical next step.

Also, just like with covid-19, dissent from the established view was not to be tolerated. In 1976, Britain had a heat wave that went on far longer than last week’s. For 15 days in a row, it reached over 90 degrees Fahrenheit somewhere in the UK. It also came at the end of a long dry period. But pointing out that we’ve had hot summers before is verboten. I googled “UK heat wave 1976.” Here are some of the top results Google served me:

It’s as if they all got the same memo—because they did. That memo is a collaboration between Sky News and the Behavioural Insights Team—aka “the Nudge Unit”—which was set up by and works closely with the UK government. Titled “The Power of TV: Nudging Viewers to Decarbonise Their Lifestyles,” the 1991 report stated:

Mass media, such as television, can play a pivotal role in encouraging consumers to decarbonize. The majority of future emissions reductions—63 percent—will need to come from changes in how we travel, how we power and heat our homes, what we eat, and what we buy. It seems only logical that broadcasters should use their unique platform to improve viewer knowledge, challenge their attitudes, and inspire them to take action against climate change.

The mass panic over the heat was partly because the media was following that memo. One cold day, we’re told every winter, does not disprove the idea of man-made climate change. But two hot days in summer are supposed to put it beyond all possible doubt.

This approach drives their selective reporting. We were warned, frequently, of how “deadly” the heat wave would be. But no one mentions the estimated 10,000 excess deaths in the UK due to cold in the winter. We’re lectured about the need to cut carbon emission. But few will talk about the way Britain has already drastically cut those emissions. To find a year when the nation was emitting less, you have to go all the way back to 1888.

Why the push, from so many, to promote this ideology?

In 2017, Trumpet editor in chief Gerald Flurry wrote a landmark article titled “What the Paris Climate Agreement Was Really About.” In it he warned, “Everyone should want a clean environment and for everything to function properly. We should be good stewards of this beautiful planet. But the Paris Agreement was not about that. … What is happening here is not about the environment. It is about destroying the United States.”

Five years later, it’s remarkable how clear this agenda is. America is using environmental rules to shut down its own fuel production at a time of soaring gas prices—meanwhile, Mr. Biden is traveling around the world trying to convince dictators to pump more oil. Farmers in the Netherlands are at the front of a global pushback against environmental rules that shut down farming to reduce nitrogen emissions. Here in the UK, government plans to reduce carbon emissions to zero are causing record energy costs and are set to cause havoc in the rental, housing and transportation markets very soon. From an environmental perspective, none of this makes sense. Why shut down your fuel and tank it in from elsewhere? Why shut down farms? People still have to eat.

The truth is, this movement is part of the effort described in Mr. Flurry’s new book, America Under Attack.

The Bible is a book mainly about Israel. Ancient Israel began with God’s relationship with Abraham. God taught and worked with the nation. He blessed the Israelites. He planned to help the whole world through them. Even though they rebelled, He was still able to accomplish His purpose.

The same is still true today. The Bible lists many promises that were given to Israel, but they were never fulfilled anciently. If we believe the Bible is the Word of God, we have to believe these promises have been fulfilled in modern times. These promises revolve around nations, plural. They cannot be fulfilled in the nation of Israel in the Middle East alone. That is just one tribe of Israel.

But the Bible also prophesies of an effort to blot out the name of Israel. These nations, and their blessings, would come under attack because they serve to point the whole world to God.

Many in the climate change movement might be motivated by a desire to do good, but the movement itself is part of this effort to blot out the name of Israel.

“Efforts to reverse climate change may look like they spring from good intentions, but there is an evil spirit behind it,” writes Mr. Flurry. “It is all tainted by deceit, intimidation, bullying and autocratic tendencies.”

The climate change movement is doubly deadly. It’s not only that it is being used to attack Israel. God is trying to get Israel’s attention through weather curses. The Bible lists clear and specific weather curses: They’re not vague like “climate change,” where any hot or cold day can be used as evidence. God warns of increasing genuine disasters if we don’t wake up. But the climate change movement prevents people from looking to God, and instead has them looking to “mother nature.”

Britain, America and many other nations will experience genuine climate disasters as God works with our nations. The spirit of blotting out Israel works to prevent these nations from heeding this correction.

Mr. Flurry’s book America Under Attack exposes the effort to blot out modern Israel. This includes America, but this reality is driving news events around the world. This book is being printed right now. You can preorder a copy or read it online today.