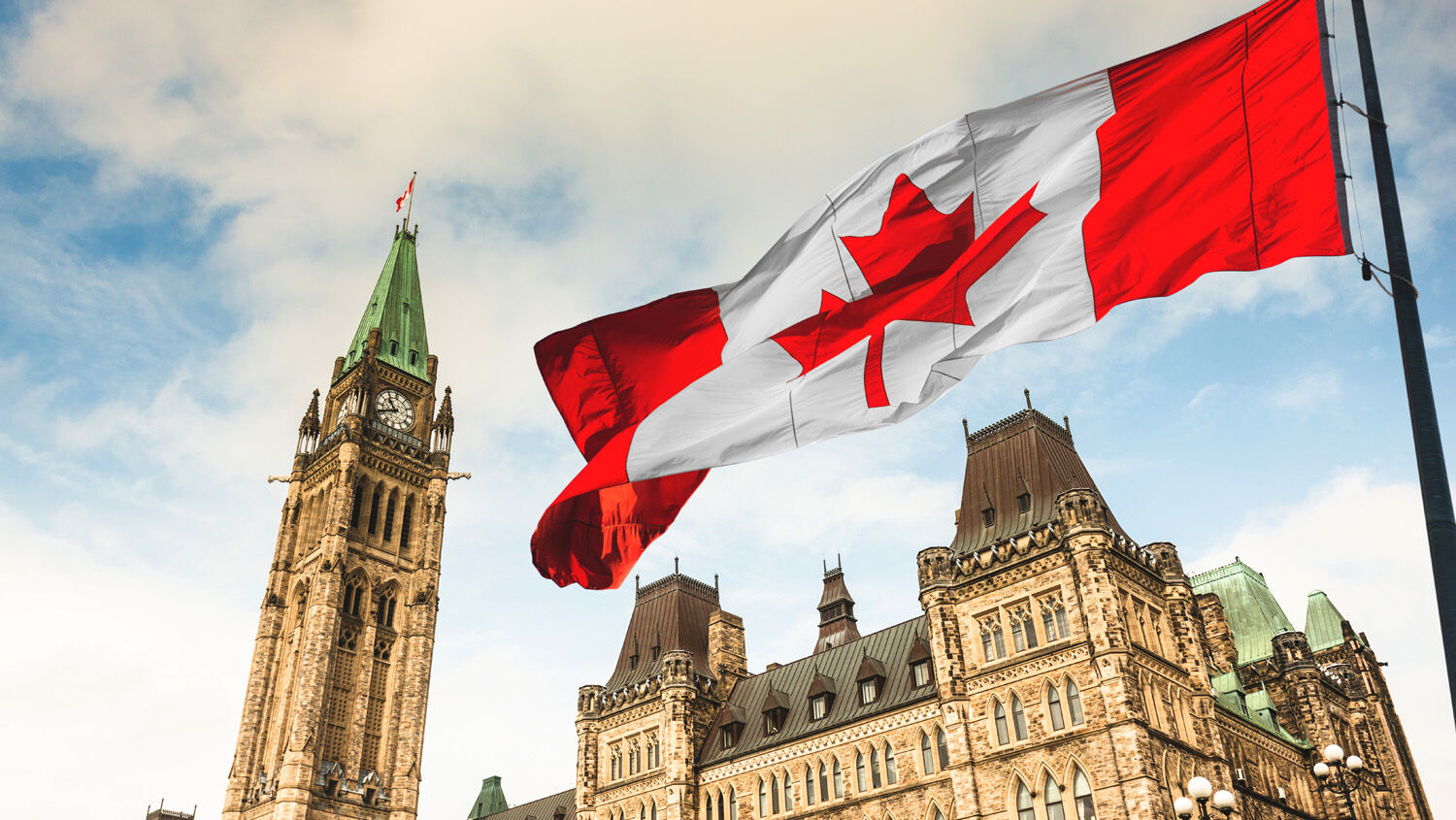 This is the second year in a row Canada Day celebrations are being canceled across Canada. Last year, the nation was in turmoil over the supposed discovery of children’s remains at a Residential School in Kamloops, British Columbia, which prompted Canada Day to be canceled and the flag to be lowered half-mast for over six months. The unmarked graves have been proved to be a hoax, yet the radical-left government and media are doubling down on that narrative.

Many cities have announced they are suffering budget issues and are opting to cancel Canada Day activities. In the nation’s capital of Ottawa, celebrations have been moved from Parliament Hill due to construction, even though the replacement location is beside a construction project seemingly more dangerous than what is in front of Parliament.

In some places, Canada Day has been completely eradicated. In Winnipeg, where last year on July 1 a mob of protesters tore down and desecrated the statues of Queen Victoria and Queen Elizabeth ii, Canada Day is now known as “A New Day.” The celebrations will be led by indigenous traditions and will be “reflective as well as celebratory.”

This theme of indigenous-centered events and planning is also taking place in Vancouver, Saskatoon, Halifax, Ottawa and many others. “Reimagining” Canada Day is a very public demonstration of how effective this false narrative on Canadian history and identity has been. In 1982, Prime Minister Pierre Trudeau changed “Dominion Day” to “Canada Day.” How many more years until Canada Day is completely erased?

The Trumpet has been warning of how the radical-left government of Prime Minister Justin Trudeau wants to make Canada the first post-national country, meaning a nation that has no identity or unifying characteristic. This is part of the radical-left’s Communist agenda. “Reimagining Canada” is fundamentally transforming Canada into a Communist state.

At the heart and core of this agenda is blotting out British history and traditions. The past is being revised to frame Canada as a systemically racist nation that was born by British colonialism. The colonial past is guilty of crimes against humanity, cultural genocide, laws inherently biased against racial minorities, and institutions that promote white racial superiority. Because of this construct, now every nonracial minority Canadian, and every institution that has ever existed, bears the collective guilt for those sins. This is propaganda and revisionism to an extreme.

While the early British settlers and Canadian government did make many tragic mistakes, among the worst being the handling of the Residential Schools and allowing the Catholic Church unchallenged control to abuse many indigenous children, this does not justify eternal guilt or the tearing down of institutions that have allowed for freedom and prosperity. Racism is a real thing, but it is not in the dna of Canadians. This false narrative is being used as justification for a Communist attack on Canada. The radical left has been winning this cultural war for over 40 years, and Justin Trudeau’s government is firing out the next salvo at Canadian schoolchildren.

Blacklock’s Reporter wrote on June 30: “Cabinet yesterday approved a taxpayer-funded booklet for schoolchildren that calls the Red Ensign flag a hate symbol and identifies the Conservative Party by name as a target of ‘infiltration’ by racists.” This government-produced booklet is part of a “values kit” that has been produced by the Anti-Hate Network, a government-sponsored third party that monitors the Internet for anything considered racist or extreme. The Canadian government spent $268,400 to help produce this booklet and has spent nearly $100 million funding similar projects.

The Anti-Hate Network claims to be nonpartisan, but consider who helped it produce the kit. According to its website: “This education program was developed in partnership with the Western States Center, one of the United States’ leading organizations working to combat white nationalism.” The Western States Center produced a similar kit for American schools in 2019. The organization is funded by the Bill and Melinda Gates Foundation, the Ford Foundation, the New Venture Fund, which is controlled by Arabella Advisors, founded by Clinton alumnus Eric Kessler, the Rockefeller Foundation, and half a dozen pro-abortion nonprofits. Western States Center has supported radical-left protests in the Pacific Northwest.

The 51-page booklet is titled “Confronting and Preventing Hate in Canadian Schools: A Tool Kit.” Read through the summary of its contents and consider that this is what is going into the minds of millions of kids across Canada this fall.

The booklet identifies white nationalism and supremacy, and includes as hate speech people who believe the trans-movement is an attack on family and those who believe feminism or transgenders have been damaging to society. It identifies many real neo-Nazi or racist groups but has broad definitions that can be interpreted as anything that challenges a progressive agenda. They even warn that the Conservative Party is vulnerable to racist infiltration, writing: “They sometimes attempt to infiltrate mainstream Conservative political parties to influence change.”

It has a number of pages encouraging students to monitor others, record what they say, and gather evidence; it even encourages school administrators to go through students’ phones and computers to see what they have been visiting. It encourages teachers to monitor and control what books and websites kids read. While parents and teachers should definitely monitor and control what kids have access to, this is not about protecting them from perverse media; this is about controlling the ideas that enter kids’ minds and ensuring they comply with the radical-left spectrum. 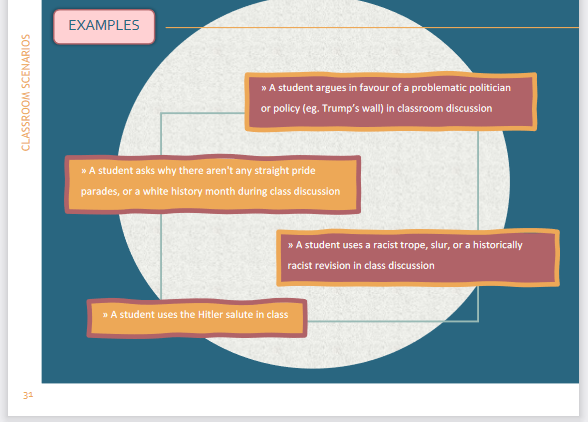 They list some examples to watch for, including a teacher wanting a “European history month,” a student arguing in favor of having a Donald Trump border wall, and students who ask why there isn’t a “straight pride month” or a “white history month.” This is openly labeling Donald Trump and his supporters as white supremacists and shutting down any debate against the progressive agenda. 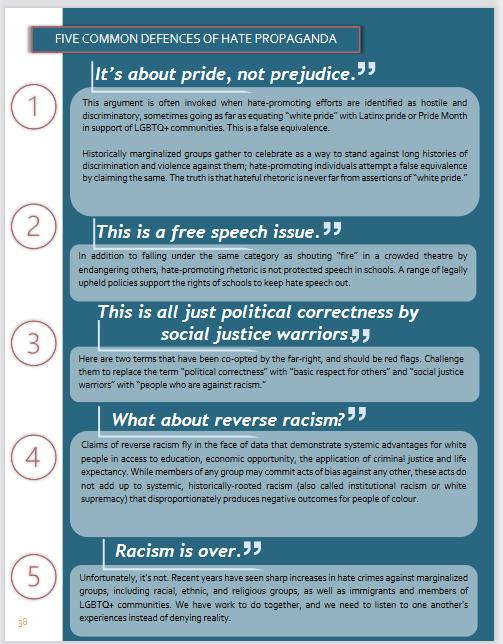 There is also a page on how to counter hate propaganda. It includes claims of “free speech” and challenging “political correctness by social warriors.” This is all part of trying to have children challenge the principle of free speech if the speech doesn’t align with their politics or ideology. It is also priming the youth to accept social justice as antiracism, when most of the movement has been hijacked by the Communist movement.

After a section on “Far-Right Memes” is a section on “Hate-Promoting Symbols.” The very first symbol shown is the Red Ensign, Canada’s flag before Prime Minister Lester Pearson changed it in 1965. This was the flag under which Canada fought both world wars. The crest features a similar pattern to the British coat of arms and the Royal Standard, the flag representing the royal family, with the three fleur-de-lis to represent Quebec and three maple leaves underneath. The Red Ensign represents Canada’s connection to the royal family and Britain. Yet the booklet says, “Its usage in modern times is an indicator of hate-promoting beliefs.” It then lists six far-right symbols, which includes the Nazi SS symbols, associating British heritage with Nazism in the minds of kids. According to their version of history, both are guilty of genocide.

This booklet is a flagrant example of government propaganda that is more akin to North Korea than a democratic society. As Trumpet editor in chief Gerald Flurry explains in America Under Attack, the Communists have already gained control over the educational institutions in the English-speaking nations. This radical-left indoctrination is aimed at Canadian children, tomorrow’s leaders. The radical left is on the verge of total victory in the blotting out of Canadian history and traditions.

Around 1800, the world changed. Britain emerged as a globe-girdling empire, and America began its rise as a world superpower. These blessings were not the result of race, exceptionalism or any superiority in the British and American peoples. These tremendous blessings of national power and prosperity were given because of the obedience of the patriarch Abraham, of whom Britain and America are descendants. All of the blessings we enjoy in Canada today are because of God fulfilling His promises to Abraham. The biblical identity of Canada can help people develop a relationship with God.

The Communist radical left hates God and attacks this connection to the Bible. The Bible prophesied the incredible abundance and peace Canada has enjoyed, but it also prophesies curses if we turn away from God in rebellion. This includes this attack on our history and identity.

There is one book you should read on Canada Day. The late Herbert W. Armstrong wrote the classic work The United States and Britain in Prophecy, which explains in detail all of the Bible prophecies of all the blessings and good things we enjoy in Canada. We can use Canada Day to be grateful for all these blessings and celebrate God’s faithfulness and greatness in fulfilling His promises. Mr. Armstrong wrote:

The most amazing fact of all history is this sudden skyrocketing from virtual obscurity of two nations to the most fabulous wealth and economic power ever possessed by any people. Britain became Great Britain—a gigantic, stupendously wealthy commonwealth of nations—the United States, the greatest nation of history.

More amazing still are the unbelievably shocking facts of the present—of how—and why—we are losing it faster than it came!

Why? The incredible facts, the reasons, and what’s now ahead will follow!

Read The United States and Britain in Prophecy to understand this incredible prophecy and what you can do about the curses plaguing Canada today.