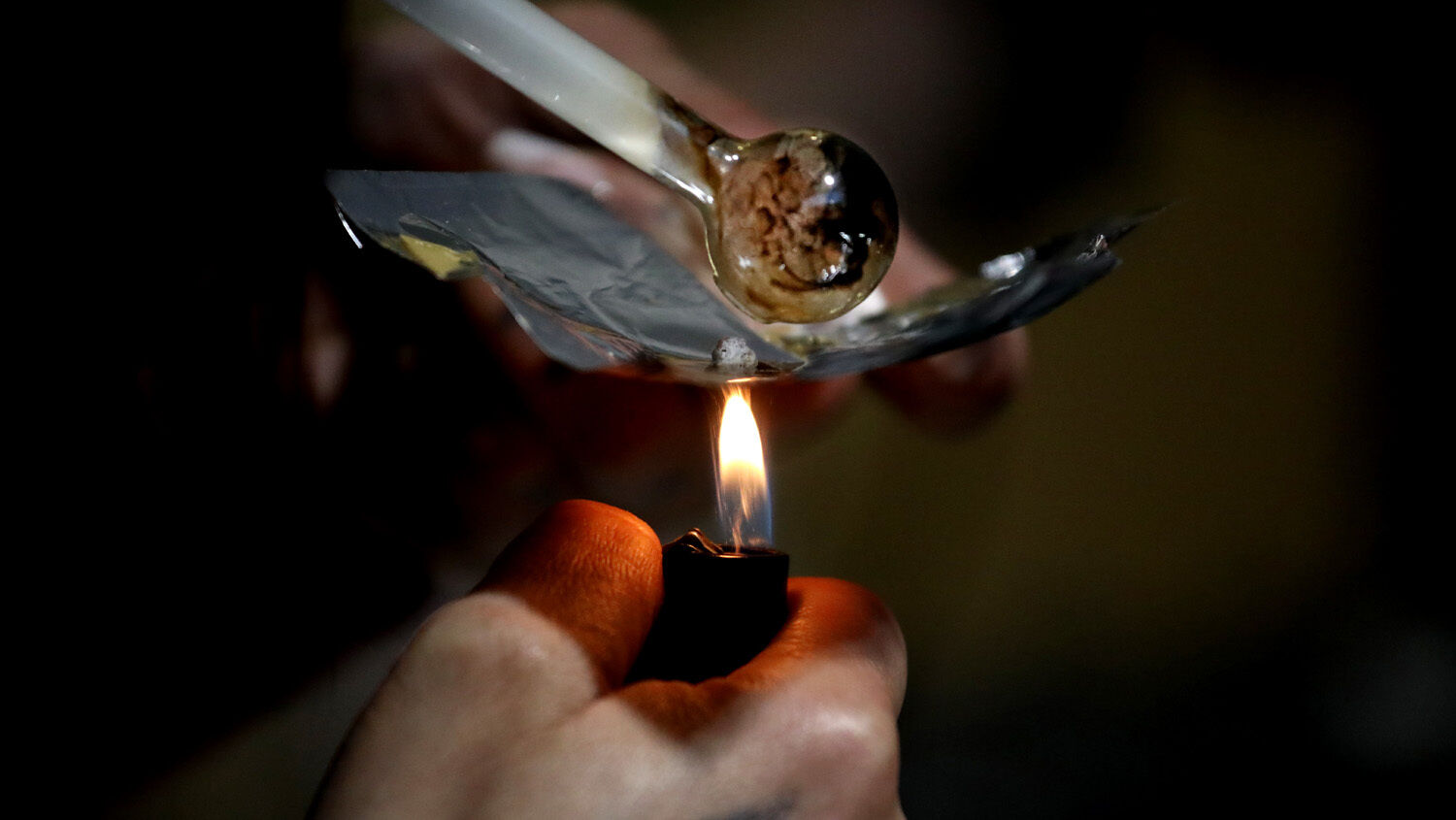 In Vancouver, British Columbia, supervised consumption sites in the dtes give addicts who use fentanyl, opioids, crystal methamphetamine and other drugs a place to use and get harm-reduction supplies.
Gary Coronado / Los Angeles Times via Getty Images

When Canada legalized cannabis four years ago, there was one person I couldn’t stop thinking about. One of my better friends in high school was a gifted track-and-field athlete and also a gifted trades worker. His family was well-to-do and stable. But he smoked marijuana. Over time, he lost his opportunities to go to university and get a good-paying job; he got caught up in gang violence, became homeless, and lost his health. Once a strong and robust young man, he was skin and bones the last time I saw him. I was standing beside my friend when a gang member hit him over the head with a tire iron as “payback” for vandalizing a car. Right at the moment in life when a young person should be preparing for a career and family, he was struggling to survive.

I have seen firsthand how recreational drug use destroys people’s lives, and now the Canadian government will make it easier to access even more destructive substances.

Starting Jan. 31, 2023, the Canadian province of British Columbia will decriminalize small amounts of illicit drugs for three years, the Canadian Health Ministry announced in May. Adults will be allowed to possess up to 2.5 grams of opioids, cocaine, methamphetamine and mdma without facing criminal charges. The British Columbian government press report stated: “This exemption is not legalization. These substances remain illegal, but adults who have 2.5 grams or less of the certain illicit substances for personal use will no longer be arrested, charged or have their drugs seized. Instead, police will offer information on available health and social supports and will help with referrals when requested.”

This is being viewed as a pilot program for permanent decriminalization and safe supplies of hard drugs. Prime Minister Justin Trudeau has mentioned that he is willing to suspend possession charges in other Canadian jurisdictions.

The focus of this exemption is Vancouver, which faces a massive crisis in drugs, homelessness and crime. The B.C. coroners service reported 722 overdose deaths from hard drugs, such as heroine, cocaine, methamphetamine and fentanyl, between January and April 2022. According to ctv News, “Illicit drug toxicity remains the leading cause of unnatural death in the province.”

More people have died from opioid overdose in British Columbia than from covid-19, not to mention deaths from other hard drugs. The province declared a public health emergency in 2016 over the opioid crisis, and covid lockdowns made the situation worse. The Vancouver Sun wrote on Oct. 22, 2021: “In a presentation to Vancouver City Council on Thursday morning, Dr. Patrica Daly said the overdose crisis killed 3,000 people in B.C. between January of 2020 and July of 2021, compared to the 1,800 who died from covid-19 in the same period.”

This tiktok video is spot on. pic.twitter.com/4QVSzzOZvw

Many governments around the world have been struggling with drug problems, and many Western nations look to solve the crisis by legalizing hard drugs and providing safe injection sites. Yet Canada has been the fastest-moving jurisdiction to decriminalize drugs.

The major turning point was in 2018, when Canada legalized marijuana. What was framed as a way to stop the black market and give people a safe supply of recreational drugs has put Canada on a path to becoming a nation permanently addicted.

When marijuana became legal on Oct. 17, 2018, long lines of people waiting to enter the legal pot shops for the first time were seen across the country. In no time, private pot shops were appearing in every neighborhood in the country. While driving through urban centers, there was a Tim Hortons on every corner and a pot shop beside it.

As of April 2022, there are 3,162 legal marijuana stores in Canada, with another 1,975 pending license approval. There are over 1,500 in Ontario alone. In anticipation of the 2018 legalization, an Ontario college created a “Cannabis 101” eight-month course on how to grow marijuana, costing $10,000.

According to Bloomberg, Canadians have legally purchased $11 billion in cannabis since 2018, and some believe there is still more room to expand the cannabis industry. A government poll has found that 26.2 percent of Canadians use marijuana five days a week. One quarter of the country gets high at least once a day. New Brunswick had the highest daily usage, with 42.2 percent of residents polled using it at least five days a week. Around 15 percent of Canadians use cannabis at least once a year. Young people ages 19 to 24 are the most likely users, with 33 percent using it once every three months.

This widespread use is having an impact on Canadian society. Since marijuana legalization in 2018, police data shows that charges for drug-impaired driving increased by 43 percent. It has also caused several labor disputes over whether employers can fire an employee for using marijuana in certain fields, including operating railways and the police force. Marijuana is also big business for the government, with Deloitte reporting that the Canadian government has gained $15 billion in taxes and has injected $43 billion into the Canadian economy. Some of the cannabis stores are government-run; others, privately owned. Yet these measures have only increased the revenues and scope of the black market, which has undercut prices and moved online. Blacklock’s Reporter wrote: “Online black market drug dealers sell more marijuana pound for pound than federally licensed distributors, says a Department of Public Safety report.”

The health impacts of marijuana use include lung and breathing problems, the risk of addiction and memory loss, and the increase of depression and mental illness. Less than two years after legalization, Canada was hit with covid-19, a virus that is especially hard on those with lung issues. The lockdown measures increased cannabis use and depression. With the additional pressure of inflation, Canada is on the verge of a mental health crisis. As time goes on, these factors will continue to worsen.

Marijuana is called the gateway drug because it often leads to hard drug use. The worst drug crisis today is undoubtedly the massive misuse and overdose from opioids. In 2021, 7,650 Canadians died from opioid toxicity—21 people per day. Opioid deaths increased by 96 percent in the first year of the pandemic. There were over 6,000 opioid hospitalizations in 2021, and 41,686 emergency medical services responses to opioid-related overdose. These statistics include people who accidentally overdose, are using prescribed opioids, or are using illegal drugs.

As drug use becomes normalized it is having an impact on criminal law. In May, the Supreme Court of Canada restored the acquittal of an Alberta man who attacked a woman while he was in a state of automatism, meaning he was so impaired or intoxicated he could no longer control his mind and actions. The Supreme Court briefly summarized the case on its website:

On the night of Jan. 12, 2018, Matthew Winston Brown consumed alcohol and “magic mushrooms” at a party in Calgary, Alberta. The mushrooms contain psilocybin, an illegal drug that can cause hallucinations. Mr. Brown lost his grip on reality, left the party, and broke into a nearby home, violently attacking a woman inside. The woman suffered permanent injuries as a result of the attack. When Mr. Brown broke into another house, the couple living there called the police.

The Supreme Court ruled that Section 33.1 of the criminal code did not allow an individual to be charged with a crime if they are in a state of automatism caused by extreme intoxication. The government passed Bill C-28 in order to change the language of 33.1 to include extreme intoxication, which greatly reduces this apparent loophole, but only time will tell if this precedent, and the increase of drug use in Canada, will allow intoxication to become a legal defense.

Why has the radical-left Canadian government embraced legalizing drugs? Having a population that is addicted, complacent, filled with broken families, and generally impoverished helps fulfill the Communist agenda of transforming Canada. Minds enslaved to drugs are much easier to enslave to a tyrannical government. Trumpet editor in chief Gerald Flurry writes in No Freedom Without Law:

We have developed a drug culture in America and Britain. Drugs are increasingly mainstream and popular, moving well past the pockets within the big cities. They are taking over the lives of people of all income levels, all walks of life. Our entertainment is more and more obsessed with the drug world. Often we see high-profile entertainers grappling with severe addiction. …

Is that freedom? How many of these people have gotten hooked on drugs and cannot stop? Even low levels of drug use can do irreparable damage to their minds. On top of that disastrous effect, how many of these people are injecting or sniffing away increasing portions of their incomes, at their families’ expense? How many are having to resort to ever more unsavory activities to fund their drug habits?

Many people would consider it freedom to destroy their lives with deadly drugs. That is not freedom! Instead they have become totally enslaved to drugs!

Laws legalizing drugs are framed as a way for people to escape and experience freedom, but it actually reinforces a lifestyle of slavery. This is being perpetuated by the Communist left, and drug use is becoming mainstream in Canada. Yet drug use also perpetuates spiritual slavery and attacks the ability for an individual to have a relationship with God, which is the ultimate goal of the spiritual force behind these policies.

Drugs please the senses and offer immediate gratification or temporary relief from pain and reality. But they will never solve problems or fix issues. The only real solutions can be found in the Bible. God’s truth offers the only path to true freedom, for your individual life and national life, and that includes being drug free. To learn more, please read No Freedom Without Law.