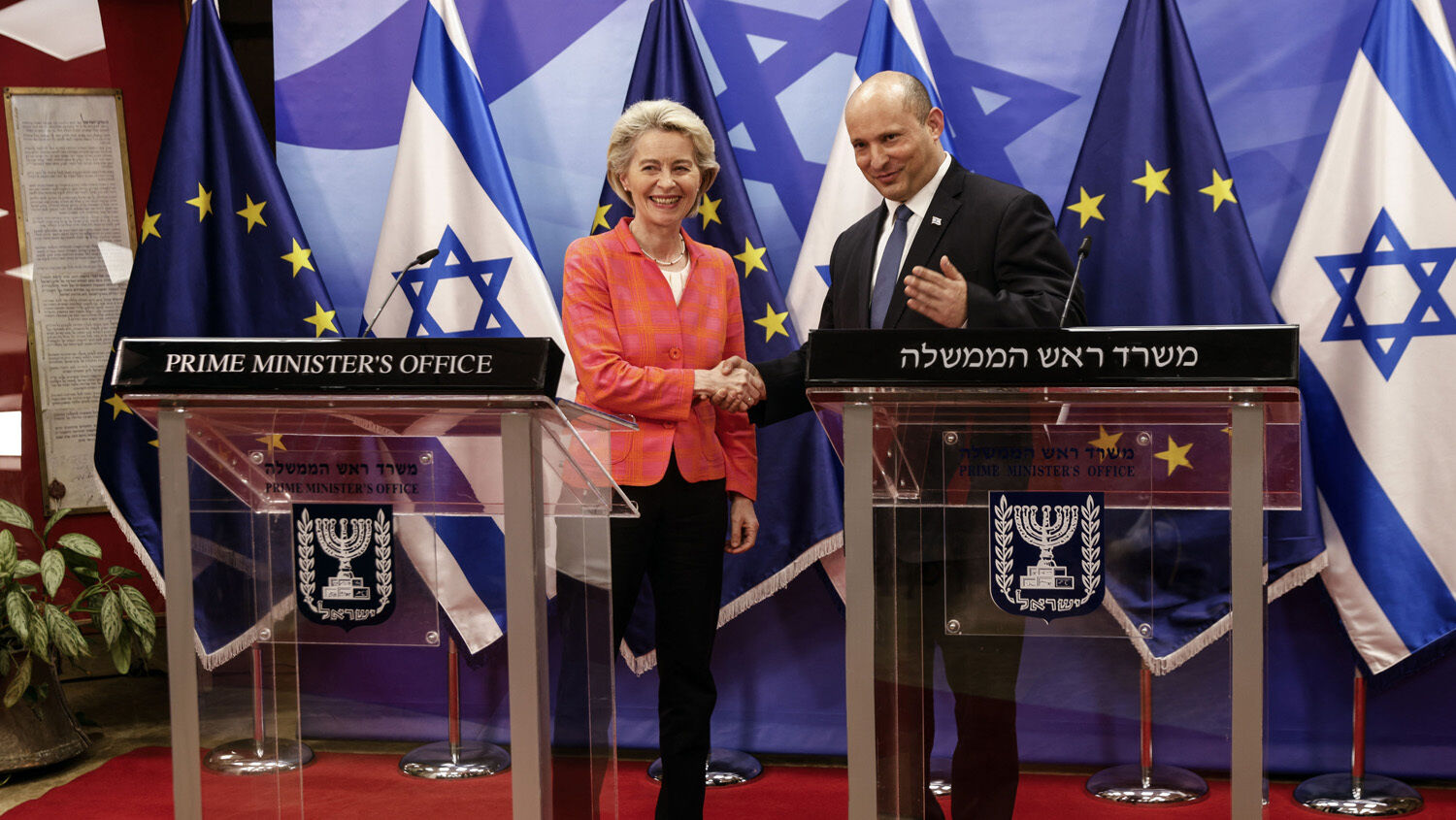 Is Jerusalem’s rapprochement with Brussels the calm before the anti-Semitic storm?

Russia is by far Europe’s largest source of fossil fuels. But the war in Ukraine is causing Europe to look for alternative sources. On the other side of the Mediterranean, the Middle East with its energy stocks is an obvious candidate. Most of the countries in the region are unstable and prone to unrest, but Israel is a prosperous, stable democracy. And Israel has significant natural gas deposits off its coast. Jerusalem then seems like a natural partner for Brussels.

During her stay, von der Leyen visited Ben-Gurion University in the city of Beersheba. The university awarded her an honorary degree. Von der Leyen took the opportunity to give a speech there. She said:

As long as I can think, I was convinced of two very simple facts. First, there is no Europe without European Jews. And second, Europe and Israel are bound to be friends and allies. Because the history of Europe is the history of the Jewish people. …

We have more in common than the geography would suggest. Our shared culture and values have created a deep connection between Europe and Israel.

Von der Leyen is absolutely right about the history of Europe being the history of the Jewish people. Jews have been living in Europe and influencing European society for over 2,000 years. But is her assertion right that “Europe and Israel are bound to be friends and allies”?

“Europe is Simone Veil and Hannah Arendt,” von der Leyen stated. “Europe is [Gustav] Mahler and [Franz] Kafka and [Sigmund] Freud. Europe is the values of the Talmud, the Jewish sense of personal responsibility, of justice and of solidarity.” Veil was a prominent French politician; Arendt, a German-born political theorist. Mahler was a composer; Kafka, an author; Freud is considered the father of modern psychology. All were Jews who had a lasting impact on European civilization.

Europe is also the Crusades, where Jews (alongside others) were slaughtered in the name of “liberating” the Holy Land. Europe is Ferdinand and Isabella, the Spanish monarchs who forced all Jews in their realm to either convert to Catholicism or be expelled. Europe is the Russian czars and their pogroms—murderous anti-Jewish riots. (Russia of course is not a European Union member, but many former parts of the Russian empire—like Poland and the Baltic States—are.) More recently, Europe is Adolf Hitler and the Holocaust. Europe is Eastern Europe’s Communist regimes and their sponsoring of Palestinian terrorists.

Europe is also the reason the Jews were exiled from the land of Israel. In the first century a.d., the Romans invaded the Holy Land and turned Jerusalem into rubble. After the Bar Kokhba Revolt concluded in a.d. 135, Rome forbade the Jews from entering Jerusalem. Since then, Jews have faced persecution wherever they’ve gone for hundreds and hundreds of years. “Europe” is—at least in part—what caused the Jews to be a persecuted race in the first place.

Von der Leyen didn’t completely whitewash Europe’s legacy of anti-Semitism. She spoke on Europe’s current struggles with anti-Semitism. But her claim about putting “the fight against anti-Semitism … at the core of the European Commission’s agenda” raises eyebrows.

The same day von der Leyen met with Bennett in Jerusalem, she traveled to Ramallah in the West Bank to meet with Palestinian Prime Minister Mohammed Shtayyeh. Von der Leyen announced the transfer of about €214 million (us$226 million) to the Palestinian Authority. The money had previously been frozen due to Palestinian incitement of violence against Israel in schoolbooks. No change has taken place on the Palestinian side, but the money was unfrozen, nevertheless.

Then, there is the issue of the Palestinian nongovernmental organizations (ngos). The ngos involved are the Addamer Prisoner Support and Human Rights Association, Al-Haq, Bisan Center for Question Research and Development, Defense for Children International-Palestine, the Union of Agricultural Work Committees and the Union of Palestinian Women’s Committees. Israel’s Defense Ministry last October labeled them all terrorist organizations. This was due to their affiliation with the Popular Front for the Liberation of Palestine (pflp). The pflp is a militant Communist terrorist group infamous for skyjackings. It’s not as high-profile as it was decades ago, but it still commits acts of terror to this day.

These groups have been funded for years by both the European Union and its member states. In 2016, ngo Monitor recorded that many of these groups received funding from the EU, Sweden, Denmark, Spain, Norway, Ireland, the United Kingdom, the Netherlands, Germany, Belgium and France. Despite the terrorist designation, the EU is still funding these groups.

The pflp is also designated a terrorist group by the EU. The pflp was historically supported by such totalitarian Communist regimes as the Soviet Union, China and North Korea. It looks like the EU is happy to continue where the Soviets left off.

On the one hand, EU officials like von der Leyen are happy to pay platitudes about “combatting anti-Semitism.” But they’re also happy to financially support terrorist groups. What explains the dichotomy?

[Europeans] pay pious lip-service to Jews murdered in the Holocaust. But in order to pretend that their own culture had nothing to do with how they died, they present Israeli Jews as a different breed altogether.

While the Jews murdered in the Shoah are depicted as passive and powerless, Israeli Jews are presented as militarily powerful. Because they have power, it is assumed they cannot be victims.

Since the Palestinians are viewed as powerless, it’s assumed in turn that they must be victims of the Israelis. Palestinian anti-Semitism must be denied because that would instead turn Israeli Jews into victims. That must be resisted.

For casting Israeli Jews instead as oppressors, thus erasing the unbroken line of anti-Semitism from antiquity to the Palestinians, gives the Europeans a free pass in their minds over the victimization of the Jews in the Holocaust in which they feel at some deep level complicit.

In other words, to justify their civilization’s heritage of complicity in the Holocaust, Europeans pretend that modern Israelis are guilty of equivalent crimes. They’re even willing to bankroll terrorist groups to “prove” this.

Yet despite all this, Bennett supported von der Leyen’s claims. “You said Israel and Europe are bound to be friends and allies because the history of Europe is the history of the Jewish people,” he said. “I could not agree more.”

Israel is traditionally one of the most friendless states in the Middle East. It has been attacked at some point by literally all of its neighbors. Jerusalem will take whatever friends it can get. And the current Israeli government may see its gas deposits as a good way to make friends with Brussels. Perhaps this is why the prime minister is willing to overlook such hypocrisy from the European commissioner.

All this raises a couple of questions. How far is Israel willing to go to cozy up to Europe? And if Europe were forced to choose Israel or the Palestinians, who would it back?

A prophecy in the book of Hosea sheds some insight. Hosea 5:13 reads: “When Ephraim saw his sickness, and Judah saw his wound, then went Ephraim to the Assyrian, and sent to king Jareb: yet could he not heal you, nor cure you of your wound.” Judah was the ancient name for the Jews—modern Israel. The Assyrians are the ancestors of modern Germany. (Request a free copy of Germany and the Holy Roman Empire for more information.)

Trumpet editor in chief Gerald Flurry writes in his booklet Jerusalem in Prophecy:

Why do the Jews go to Germany, and what is Judah’s wound? The word wound is number 4205 in Strong’s Concordance. It means “in the sense of binding up: a bondage, i.e. remedy.” Gesenius’ Lexicon defines it this way: “the pressing together, binding up of a wound; here used figuratively of a remedy applied to the wounds of the state.” In other words, the remedy is the wound!

Another word for wound is also mentioned in Obadiah 7: “All the men of thy confederacy have brought thee even to the border: the men that were at peace with thee have deceived thee, and prevailed against thee; they that eat thy bread have laid a wound under thee: there is none understanding in him.” This wound is number 4204 in Strong’s. Gesenius defines it as “falsehood; hence, fraud, insidious dealing … net, or snare.” It has the same root word as the word used in Hosea 5:13. In Obadiah the wound is directly related to being deceived by a peace pact!

Mr. Flurry then asks: “Is the peace pact with the Arabs the Israeli wound that God refers to in Hosea 5:13?” To fix their problems with the Arabs, the Israelis turn to Europe—especially Germany—for help. The Israel-Europe gas talks show this relationship is starting to be sown.

But Brussels’ support for the pflp shows that Europe’s support for Israel is duplicitous at best. At worst, it’s a backstab waiting to happen. Other prophecies, like Isaiah 10:5-7, show that “Assyria” (Germany) will end up being a greater danger to Israel than even the Arabs. Verse 7 specifically says Germany will “destroy and cut off nations not a few.” The Bible reveals the State of Israel will be one of these nations.

Jerusalem reaches out to Europe at its own peril.

To learn more, please request a free copy of Jerusalem in Prophecy.