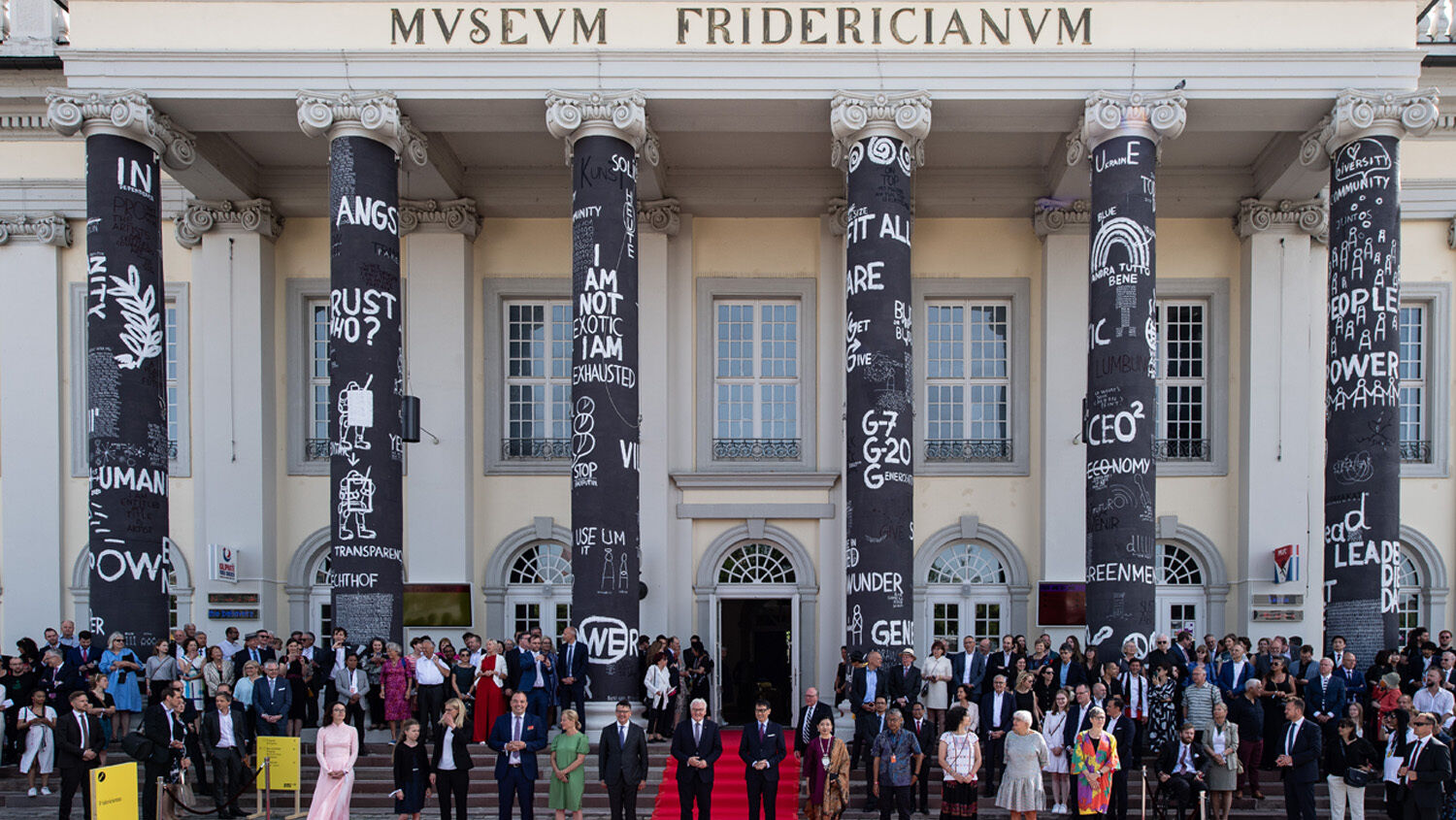 No Jewish artists were permitted, but anti-Semites were invited to Germany’s famous art show Documenta 15 in Kassel, Germany. At the show, Jews were depicted with vampire teeth and pigs’ heads and compared to Nazis. Hatred against Jews is spreading and is apparently tolerated in Germany. This year the exhibition curators were an Indonesian collective called Ruangrupa. But it’s Germany that has been blamed for allowing the outright anti-Semitic nature of the exhibit that opened on June 18 and will run for 100 days with an expected 1 million visitors.

Spiegel Online warned on June 17: “Germany’s most important art show is co-organized by people who are hostile to Israel. And politicians are watching.” Documenta 15 hosted artists from all over the world, including “action film directors from Uganda, queer screen printers from Argentina, Spaniards who have invented a cheese currency.” Yet Spiegel said organizers “seem to have forgotten” one country: Israel. It continued:

Unfortunately, it has to be said clearly: Germany’s most important art show, sponsored by the German government, opened by the German president and the state minister of culture, paid for by taxpayers’ money, is being co-organized by people who are hostile to the only democracy in the Middle East. They openly sympathize with the bds movement (“Boycott, Divestment and Sanctions”), which in part questions Israel’s right to exist. Three years ago, the Bundestag passed a resolution with a large majority, according to which the methods of the bds scene are classified as anti-Semitic.

Once the art show opened, the true scandal (which Germany could have prevented) came to light.

One of the artworks depicted a pig with a Star of David and the inscription “Mossad” (Israel’s national intelligence agency) on its head. Another project called “Gaza Guernica,” by Palestinian artist Mohammed al-Hawajri, combined the famous Picasso painting “Guernica,” a tribute to the Spanish city bombed by the Nazi Air Force in 1937, with images of Israeli anti-terrorist operations, implying a parallel between Nazi cruelties and Israel’s war on terror. Another picture showed Jews with vampire teeth, cigars, temple curls, red eyes and an SS rune on their hats.

President of the Jewish Community of Munich and Upper Bavaria Charlotte Knobloch said, “As a member of the Jewish community, but also as a citizen of this country, I am appalled by the sheer hatred of Jews that is shown in the painting by Taring Padi: persons with temple curls and SS runes, plus a pig’s head with the inscription ‘Mossad’—that’s blatantly anti-Semitic.”

Pigs and vampires: They are among the best-known metaphors in the accusatory depiction of capitalist oppressors. They have been in circulation since the 19th century …. Even then, they partly ran parallel to anti-Semitic clichés, partly merged with them. These stereotypes reached their terrible climax in the National Socialist hatred of Jews. After that, they lived on in varying degrees of connection—in anti-Semitism of the most diverse, including Islamic provenance, as well as in the left-wing critique of capitalism.

Jüdische Allgemeine summarized the criticisms the art show received. Christoph Heubner, executive vice president of the International Auschwitz Committee, said: “The degrading depiction of Jewish people in drawings on display is tainted with anti-Semitic clichés that seem very familiar to Holocaust survivors, reminding them of the dark times when they were outcast and hounded with similar drawings.” He accused those politically and artistically involved of having displayed an “inability to talk” in preparing the show, which “tragically will produce nothing but new anti-Semitic and anti-Israeli clichés in the minds of many: The Jews as eternal troublemakers and detractors of Documenta 15.”

Speaking Saturday at the show’s official opening, German President Frank-Walter Steinmeier said that “there are limits” to what artists can do when they address political issues. “As justified as some criticism of Israeli policies, such as the building of settlements, is, recognizing Israeli statehood means recognizing the dignity and security of the modern Jewish community,” Steinmeier said. “As Germany’s president, I say for my country: Recognizing Israel is the basis and condition for debate here.”

How telling that Steinmeier couldn’t even make this statement without criticizing Israel first. Instead of putting an end to the baseless hatred, he called on organizers to take on the role of mediators and “create appropriate structures” for debate. With some minor changes, the art show was permitted to continue.

Spiegel and others have compared the art show to the infamous depictions of Jews as pigs in European churches. Just recently, Germany’s Federal Court of Justice ruled that a 13th-century sandstone relief, called “Judensau” (Jews’ sow), at the church in Wittenberg was allowed to stay as a memorial. The Times of Israel noted: “Although the court agreed that the content of the carving was offensive, it found that the church had taken sufficient steps to counter this by installing a memorial and information board.”

Germany has simply added a footnote to its problem with anti-Semitism. But the fact that anti-Semitism in Germany’s cultural institutions is so widely tolerated has more than one reason. An important reason is explained in The Nazis Go Underground, by Curt Riess. Nazis believed cultural organizations were the perfect hiding place for their operations. These cultural institutions are a powerful tool in shaping the minds of people. Major German publications have recently been caught using art to arouse anti-Jewish sentiments.

A caricature in Germany’s Süddeutsche Zeitung went viral on social media on May 26. It portrayed Ukrainian President Volodymyr Zelenskyy ominously leaning over leaders gathered at the World Economic Forum. Zelenskyy appeared to be the real power behind the meeting. The caricature displayed anti-Semitic stereotypical Jewish trademarks: a hooked nose, large ears and obesity. Zelenskyy looked frustrated, as if the world leaders are acting too slowly. Certainly one is allowed to view Zelenskyy’s role and approach to things critcally. But is portraying him as an angry, world-ruling Jew appropriate? Does that not stir up Nazi sentiments?

Süddeutsche Zeitung received much criticism but claimed the caricature was based on his video address to the forum. Many people were left wondering what the message behind this was supposed to be for its over 1 million daily readers.

Remko Leemhuis, director of the American Jewish Committee Berlin, told Bild: “We are appalled—but not really surprised—that once again a clearly anti-Semitic caricature has been published in Süddeutsche. Unfortunately, we must therefore conclude that after the previous scandals no learning has taken place, or perhaps the will to do so is simply lacking.”

In 2014, Süddeutsche Zeitung published a caricature showing Facebook boss Mark Zuckerberg as an octopus with traditional Jewish temple curls and a hooked nose. Of course Facebook hasn’t been a force for good, but the caricature appeared to blame its faults on the Jewish race.

Süddeutsche Zeitung also had similar caricatures of former Israeli Prime Minster Benjamin Netanyahu holding a nuclear bomb at the Eurovision song contest in 2018. In every case the caricature would have gone through various levels of approval before it was published.

Whether in the media or in art shows, in relation to Israel or Jews in general, we are seeing a new wave of hatred. In the lead-up to World War ii, Jews were viewed with great contempt. Conspiracy theories ran wild. Almost every problem was blamed on Jews. This resentment led to incredible evil. Similar resentment is surfacing again.

Germany has had opportunities to stop such hatred, but all too often, it tolerates or even sponsors it. Anti-Semitism is concerning around the world; but in Germany, it has proved to be most destructive. Has the world learned the lesson from history, or will we repeat its devastating error?

Our article “The One Minority Society Loves to Hate” examines the causes for this hatred and why we should not overlook even the smallest warning signs.

How It Will End

The Bible reveals that history will repeat itself. Specifically, it prophesies that Middle Eastern nations will join Germany in an effort to blot out the name of Israel. “They have said, Come, and let us cut them off from being a nation; that the name of Israel may be no more in remembrance. For they have consulted together with one consent: they are confederate against thee: The tabernacles of Edom, and the Ishmaelites; of Moab, and the Hagarenes; Gebal, and Ammon, and Amalek; the Philistines with the inhabitants of Tyre; Assur also is joined with them: they have holpen the children of Lot. Selah” (Psalm 83:4-8). Trumpet editor in chief Gerald Flurry has explained this prophecy, writing:

There has never been such an alliance to attack or totally destroy Israel in history. Concerning this psalm, the Anchor Bible reads, “History transmits no record of the national crisis when the nations enumerated in this psalm formed a league to wipe out Israel ….”

Lange’s Commentary points out, “The 10 nations who are here enumerated as being combined against Israel, are never mentioned elsewhere as enemies allied at the same time and for the purpose of annihilating Israel.” Other commentaries make the same point. This must be an end-time prophecy!

Most of the Arabs were allied with Germany in World War ii. They knew what Hitler was doing to the Jews, and we know the way many Arabs feel toward the Jews. Since America and Britain support the Jews today, it is not difficult to envision the Arabs and Germans allied against them. And this prophecy ties in with other end-time Bible prophecies very well. After all, God does tell us to put various Bible verses together in order to understand prophecy (Isaiah 28:13).

Today, we see great hatred in Europe and the Middle East directed against the Jews, but also at the other primary nations of modern Israel—the United States and Britain. Historic and future attacks on the Jews and the nations of Israel are detailed in Mr. Flurry’s book The Eternal Has Chosen Jerusalem. But beyond this suffering, the Bible reveals a wonderful hope for the Jews and all mankind. As Mr. Flurry explains, this vision is encapsulated in the phrase “the Eternal has chosen Jerusalem.”