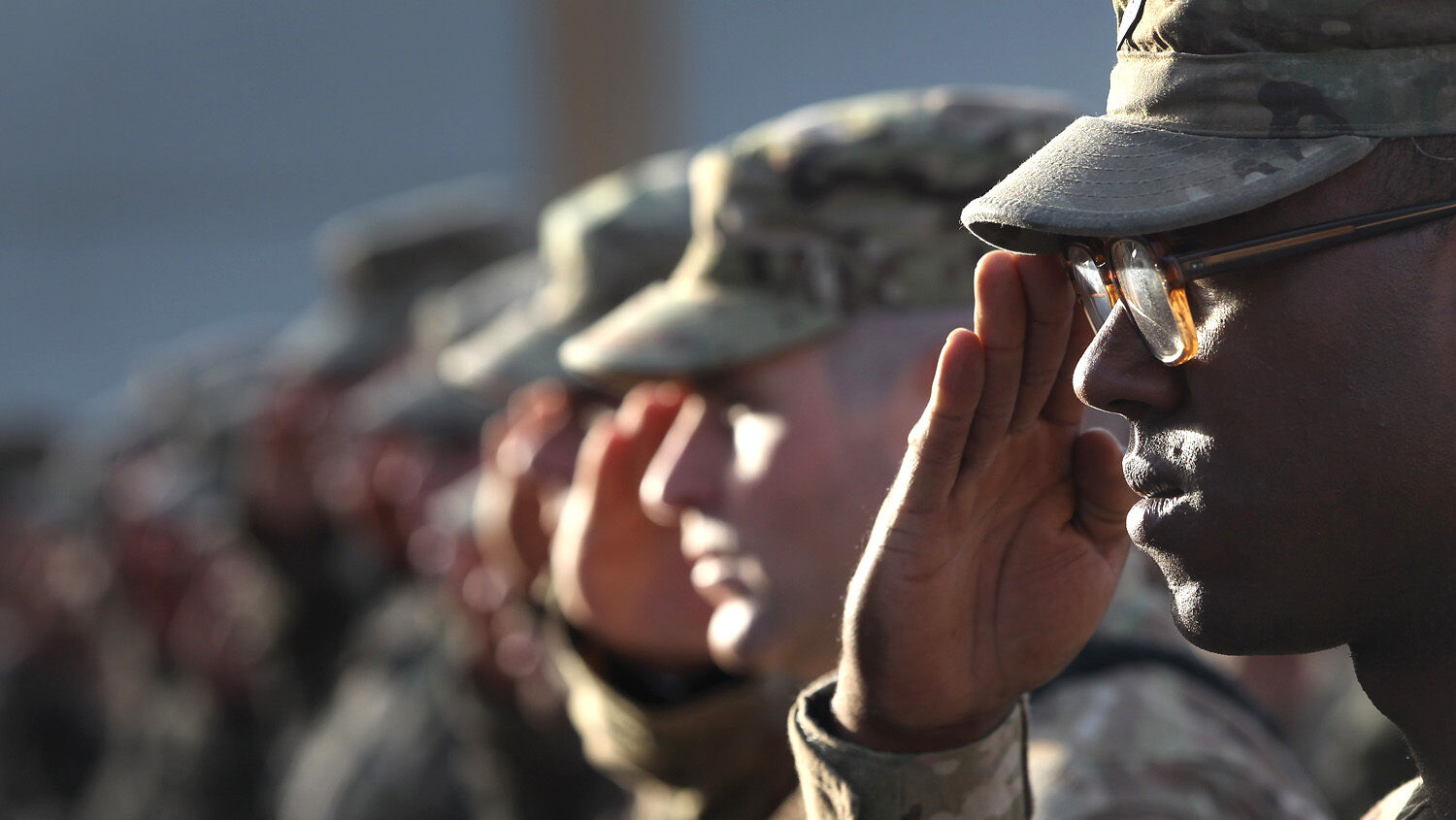 The United States of America outpaces all other nations in military expenditures. In fact, it spends more on its military than China, France, Germany, India, Japan, Russia, Saudi Arabia, South Korea and the United Kingdom combined. Yet despite America’s immense power, there is still one nation on Earth with the power and influence to completely destroy America and render it helpless.

“Shall we expect some trans-Atlantic military giant to step the ocean and crush us at a blow?” Abraham Lincoln asked the Young Men’s Lyceum of Springfield, Illinois, on Jan. 27, 1838. “Never! All the armies of Europe, Asia, and Africa combined, with all the treasure of the Earth (our own excepted) in their military chest, with a Bonaparte for a commander, could not by force take a drink from the Ohio or make a track on the Blue Ridge in a trial of a thousand years. At what point then is the approach of danger to be expected? I answer. If it ever reach us it must spring up amongst us; it cannot come from abroad. If destruction be our lot we must ourselves be its author and finisher. As a nation of freemen we must live through all time or die by suicide.”

New documents obtained by Judicial Watch show that West Point cadets are being taught critical race theory. This subversive doctrine was formulated in 1989 at a retreat organized by black feminist activist Kimberlé Crenshaw. It is a new kind of communism, where race conflict replaces class conflict, in an effort to overthrow capitalism. And America’s top brass are now pushing this ideology on soldiers.

“Our military is being undermined from within,” Judicial Watch president Tom Fitton told Tucker Carlson. “[T]his is the type of Marxist revolutionary language that our military was designed during the Cold War to try to protect this nation from. And now they’re on the inside. [T]his is the Biden Defense Department.”

Some of the documents obtained by Judicial Watch reveal that West Point cadets are being taught that “in order to understand racial inequality and slavery, it is first necessary to address whiteness” and also that whiteness is “a standpoint or place from which white people look at themselves and the rest of society.”

These documents further state that officers “need to be prepared to thoughtfully answer questions when soldiers ask about topics in the news, such as critical race theory.” Yet rather than explaining the Marxist roots of this theory, West Point training material teaches that black Americans are “less likely than whites” to receive “recommended medical screening tests” or receive “a job promotion” because of structural racism.

This training is not designed to solve prejudice or bigotry. It is intended to weaken the military by dividing it into pro-capitalist and pro-socialist camps. Lt. Col. Matthew Lohmeier was relieved of his command last year after self-publishing a book titled Irresistible Revolution: Marxism’s Goal of Conquest & the Unmaking of the American Military. His dismissal was concerning as his book made a strong case that America’s military is being destroyed by a subversive ideology many sacrificed their lives to stop during the Cold War.

During his May 14, 2021, appearance on the Information Operation podcast with host L. Todd Wood, Colonel Lohmeier revealed that military diversity training programs are steeped in Marxism and critical race theory.

“Our diversity, inclusion and equity industry and the trainings we’re receiving in the military via that industry are rooted in critical race theory, which is rooted in Marxism,” he said before recounting how he was given a training manual that cited the January 6 Capitol Hill protests as an example of extremism, while ignoring the Black Lives Matter riots that took place following the death of George Floyd at the hands of a police officer.

Wood joked with Colonel Lohmeier, “You’ll probably be removed after this interview goes live.” Lohmeier only laughed and said, “That would be a hefty move,” considering the thousands of books on communism and Marxism already available at Maxwell Air Force Base. Yet Wood was right. Colonel Lohmeier was relieved of his command in the 11th Space Warning Squadron at Buckley Air Force Base.

Many people were surprised when Lt. Gen. Stephen Whiting fired Colonel Lohmeier. Still, Lohmeier may only be the beginning of a much larger military purge. Defense Secretary Lloyd James Austin has hired critical race theorist Bishop Garrison as the Pentagon’s new extremism czar, tasked with purging extremists from the military. His Countering Extremism Working Group will now be monitoring the Internet search histories and social media posts of military personnel, looking for evidence of “extremist behavior.” And to circumvent First Amendment restrictions on government monitoring, Garrison’s group will be using a private surveillance firm to “continuously” trawl through the social media accounts of troops.

What would America look like if its military split into hostile factions? The last time that happened was when Abraham Lincoln was president. Still, there is a real chance American soldiers will soon have to choose whether to uphold the U.S. Constitution or the Marxist values being forced on them. The fact that the most recent campaign finance data from the Federal Election Commission reveals Sen. Bernie Sanders to be the most popular presidential candidate among soldiers shows the division in the military.

America is bitterly divided. Prominent observers are discussing the possibility of civil war. One 2019 Georgetown University poll showed that two thirds of Americans believe the U.S. is “on the edge of civil war.” Will military infighting between pro-capitalist and pro-socialist forces destroy American power to such an extent that “some trans-Atlantic military giant might actually step the ocean and crush us at a blow”?

Bible prophecy indicates that the answer is yes. The late Herbert W. Armstrong explained in his landmark book The United States and Britain in Prophecy that the Anglo-Saxons and related peoples who settled the United States and Britain are descended from the ancient Israelite tribes of Ephraim and Manasseh. This means the Bible’s end-time prophecies concerning Israel are primarily directed at modern-day America and Britain.

In Ezekiel 5, God reveals that one third of the population of end-time Israel will die from pestilence, famine and violence before a foreign power invades to carry the population away as enslaved people.

“And I will do in thee that which I have not done, and whereunto I will not do any more the like, because of all thine abominations. … A third part of thee shall die with the pestilence, and with famine shall they be consumed in the midst of thee: and a third part shall fall by the sword round about thee; and I will scatter a third part into all the winds, and I will draw out a sword after them” (verses 9, 12). These verses indicate that America damages itself before foreign enemies invade.

Mr. Armstrong strongly believed that communism would be the ideology to weaken America to the point where it could no longer defend itself. “What we fail to grasp, in the struggle with Russia, is this: We are not fighting a single nation in a military war, but a gigantic worldwide, plain-clothes army, masquerading as a political party, seeking to conquer the world with an entirely new kind of warfare,” Mr. Armstrong wrote in 1956. “It’s a kind of warfare we don’t understand, or know how to cope with. It uses every diabolical means to weaken us from within, sapping our strength, perverting our morals, sabotaging our educational system, wrecking our social structure, destroying our spiritual and religious life, weakening our industrial and economic power, demoralizing our armed forces, and finally, after such infiltration, overthrowing our government by force and violence! All this, cleverly disguised as a harmless political party!”

Today, we see a Marxist presidential administration working overtime to unmake the U.S. military. The American people may well be the author and finisher of their own destruction unless something dramatic happens.

The great lesson of all history is that the law of God is the only law that leads to peace, unity and prosperity. As people seek unity with God, they also achieve agreement with each other. As political division and civil unrest grips America, as hostile foreign powers rise, it’s time to look to the same Bible Abraham Lincoln did and “[s]eek the Lord while he may be found, call upon him while he is near” (Isaiah 55:6; Revised Standard Version).