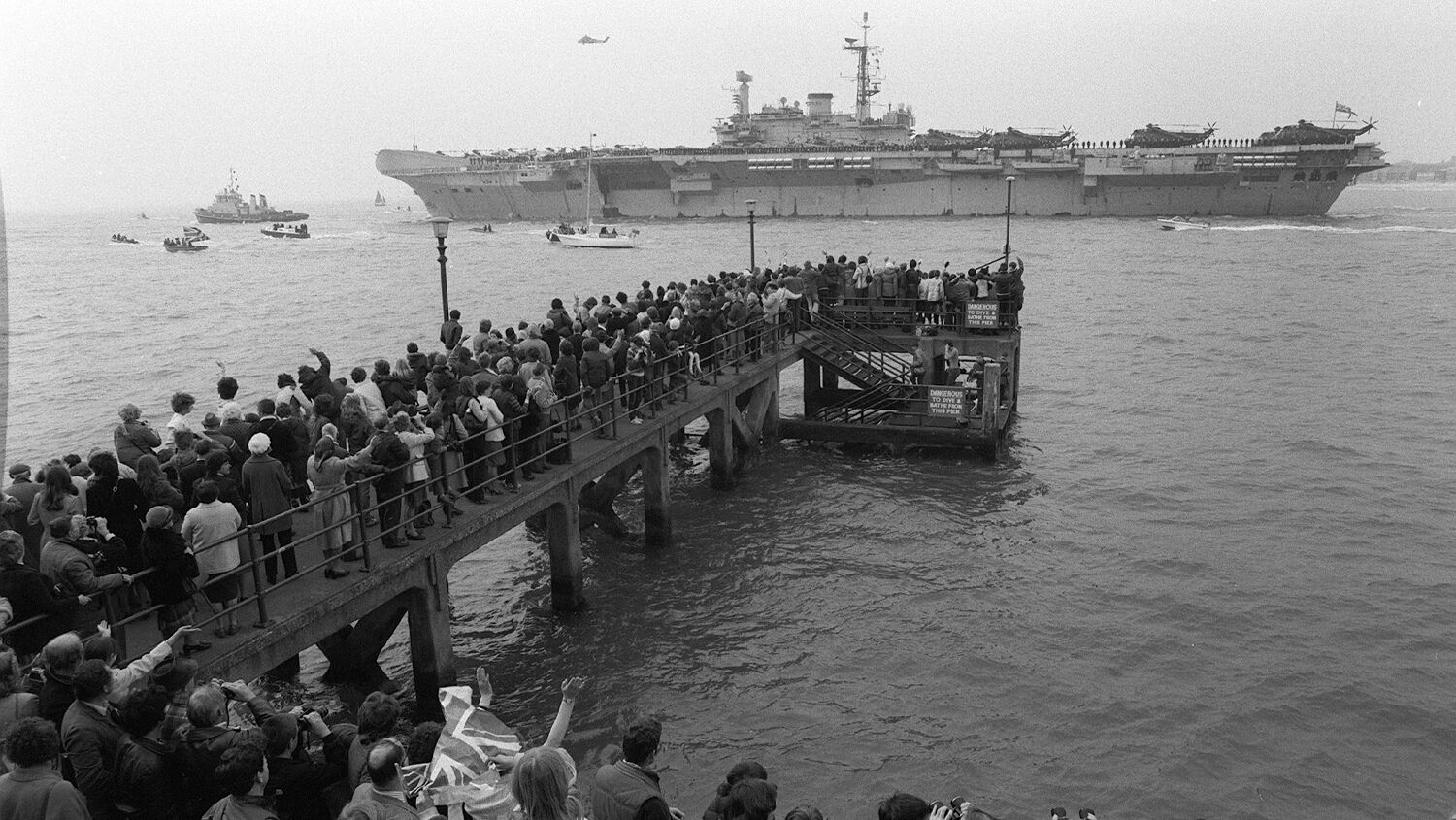 The Falklands War was the last moment Britain had pride in its power.

The darkness of night was pierced by the flash of gun muzzles and the sounds of war. The British 2nd Battalion of the Parachute Regiment was tasked with taking Goose Green in the Falkland Islands from Argentine occupation. This meant capturing a number of entrenched enemy positions on a ridge line. The fighting descended into hand-to-hand combat.

The advance stalled at the base of Darwin Hill. Commanding officer Lt. Col. Herbert H. Jones assessed the situation and realized victory hung in the balance. The London Gazette wrote in 1982: “It was clear to him that desperate measures were needed in order to overcome the enemy position and rekindle the attack, and that unless these measures were taken promptly the battalion would sustain increasing casualties and the attack perhaps fail. It was time for personal leadership and action.”

Jones led the assault himself, brandishing a submachine gun as he charged ahead of his men. The battalion went from trench to trench in the darkness. The Argentines defended every inch of ground. Though Jones was killed in battle, the battalion took Darwin Hill and Goose Green the next day. Jones was awarded the Victoria Cross posthumously for his bravery during the assault.

The Falklands War was the last hurrah for an empire in deep decline.

Ever since Britain asserted its sovereignty over the Falkland Islands in 1833, there has been contention between Britain and Argentina. In 1976, the Argentine military successfully pulled off a coup d’état and set up a military junta. With the support of the Catholic Church, particularly the Jesuit order led by Jorge Bergoglio (Pope Francis), the junta secured power in the country. In 1982, Argentina invaded and occupied the islands, which are only 300 miles off its coast.

The Bible reveals that Britain received the islands as part of a blessing from God. The late Herbert W. Armstrong explained in The United States and Britain in Prophecy that America and Britain are descendants of the biblical tribes of Israel. God unconditionally promised to Abraham that his descendants would inherit the birthright blessings of world power and wealth because of Abraham’s obedience and faithfulness to God. This is why starting around 1800 Britain suddenly rose to become a world empire and America began its ascendancy into becoming a superpower. Notice what Mr. Armstrong wrote regarding “the prophetic promises of Genesis 22:17”:

To Abraham God said: “That in blessing I will bless thee, and in multiplying I will multiply thy seed as the stars of the heaven, and as the sand which is upon the sea shore; and thy seed shall possess the gate of his enemies.” …

Earlier we quoted the correct Fenton translation: “… and your race shall possess the gates [plural] of its enemies.” As explained there, the “gates” of enemy nations are the strategic sea gates of entrance to or exit from these nations. Although all wealth comes from the ground, prosperity and affluence on a national scale always have come also by industry and commerce. And commerce between nations has been transacted almost altogether by the sea-lanes of the world—by ships and, within a continent, by railroads.

[S]ince the birthright pertains to nations, the “gate” of our enemies would be such passes as Gibraltar, Suez, Singapore, the Panama Canal, etc.

One of the sea gates given to Britain, as a fulfillment of this prophecy, was the Falkland Islands. The islands command the southern tip of South America, which remains only one of two ways of transit between the Atlantic and Pacific Oceans in the Western Hemisphere. Before the Panama Canal was constructed, this was the only means of shipping from the east to the west coast of the United States.

However, just as God fulfilled His promise and bestowed upon America and Britain the birthright blessings, the Bible also prophesied that these blessings would be removed for sin and replaced with curses. Ever since the end of World War ii, curses have seized our nations. The gradual decline in society, power, wealth and morality has been intensifying. Mr. Armstrong wrote:

[P]recisely as prophesied, Britain’s sun has now set. As these same prophecies that foretold Britain’s greatness revealed far in advance, Britain has already been reduced to a second-rate or third-rate power in the world.

And the United States? Today America finds herself heir to just about all the international problems and headaches in this post-World War ii, chaotic, violent world. And the United States has won her last war—even little North Vietnam held her at bay. Many other nations sap America’s national strength, “and he knoweth it not,” as God long ago foretold!

One of the key prophecies about the national decline is found in Leviticus 26:19, which says God will break the pride in our power. This means we would lose the willpower and the strength of character to use military might to defend the gifts and blessings from God. For the British Empire, history clearly records that after the Suez Crisis, when Britain weakly surrendered that vital sea gate, the entire Empire dissolved all over the world. Due to increased social spending at home, the British military became dilapidated and barely adequate to defend the remaining overseas possessions. When Argentina invaded the Falklands, it appeared this trend would continue

If not for the leadership of Prime Minister Margaret Thatcher, Britain probably would have weakly allowed the Argentine dictatorship to seize control. News first reached Britain on April 2 that the Falklands had been seized. The island of South Georgia was captured the next day. Thatcher’s instinctive response was to restore the status quo and authorize the formation of a naval task force. However, the first battle she had to fight was within her own party and in the House of Commons. The loss of the Falklands was humiliating, and it threatened to topple Thatcher’s government, which was on wobbly footing in 1981 and 1982. Many factions within the Conservative Party opposed military intervention. The strongest opposition came from within Thatcher’s own cabinet, with many men holding powerful positions thinking any military intervention was impossible or ludicrous.

The difficulties facing the naval task force and any military intervention were extreme. Britain lay 8,000 miles from the Falklands, and it would take several weeks of sailing to reach the theater of operations. The closest British possession, Ascension Island, is 3,300 nautical miles distant. The government was on the verge of cutting the Royal Navy by 20 percent, and the two aircraft carriers in the task force, the hms Hermes and Invincible, would have been scrapped if not for the invasion. Lacking transport ships, the Army had to requisition two cruise liners to transport the troops. Britain only had 48 Harrier fighters against 122 Argentine jets. The United States Navy assessed Britain’s chance of recapturing the Falklands as “militarily impossible.”

Yet Thatcher believed Britain had the right and responsibility to recapture the Falklands. It was the decision to defy the odds, defy the United States, and resist the temptation to simply capitulate that reinforced her reputation as the “Iron Lady.” Thatcher wrote in her memoir Downing Street Years: “When you are at war you cannot allow the difficulties to dominate your thinking: You have to set out with an iron will to overcome them. And anyway what was the alternative? That a common or garden dictator should rule over the Queen’s subjects and prevail by fraud and violence? Not while I was prime minister.” This response inspired Newsweek to run its famous 1982 cover: “The Empire Strikes Back.”

By the time the task force reached the Falklands, 10,000 Argentines had dug in on the island. The British forces totaled 25,000 between all three branches. Despite the dilapidated state of the British military, the British soldiers, sailors and airmen proved more than a match for the Argentines. The pride, traditions and leadership of the British forces overcame all difficulties. The British fought a series of tough land battles to recapture key positions on the harsh landscape of the island, with the Royal Marine commandos famously marching on foot across the entire island. On sea, a British submarine controversially sank an Argentine destroyer outside the naval exclusion zone, with over 300 perishing. Yet this effectively deterred the Argentine Navy from leaving harbor.

In the air, the British launched Operation Black Buck One, which was the longest air raid in history at that time. With outdated equipment and little room for error, the British pilots pulled off the nearly impossible mission. It epitomized the fighting spirit and courage that still existed in the British forces at the time. You can watch a brief video about the raid below.

On June 14, 1982, the British forces captured Port Stanley, the capital, and the hostilities officially ended. The war lasted 74 days, costing 255 British and 650 Argentine lives. The British captured over 11,000 Argentine soldiers. Following the British victory, Thatcher gave a speech on July 3, in which she announced: “What has indeed happened is that now, once again, Britain is not prepared to be pushed around. We have ceased to be a nation in retreat.” Indeed, it seemed that Thatcher’s leadership had stopped 30 years of rapid decline.

Yet Isaiah 3 warns that the more America and Britain sin, the more strong male leadership will be removed. This lack of leadership was apparent since the end of World War ii. Verse 12 prophesies that as the male leadership is removed, women would assume the leadership positions both in the family and on a national scale. This is the opposite of what the Bible teaches on government, and it ultimately contributes to national decline.

Sometimes God will use strong female leadership to condemn weak male leaders and move Bible prophecy forward. An example of this is Deborah in Judges 4. Barak and the other men of Israel would not go to battle unless Deborah was with them. Trumpet editor in chief Gerald Flurry writes in The Former Prophets: “The only reason God was using this great woman [Deborah] was that there were no men strong enough to lead!” This is exactly what happened in 1982. Only Margaret Thatcher had the strength of character to still have pride in Britain’s power, and there was enough strong leadership in the military to succeed operationally.

The Falklands War was the last time Britain displayed pride in its power and a will to fight for the birthright blessings. Soon afterward, Britain continued in its decline as a world power. The success did not motivate people to cease from sin or ask why the British Empire dissolved in their lifetimes. Even Thatcher’s strong leadership and belief in Britain could not stop the curses from dissolving away the few remaining vestiges of the Empire.

Immediately after the victory of the Falklands War, the only real solution to all of Britain’s problems presented itself to Margaret Thatcher. In July 1982, Prime Minister Thatcher met with Herbert W. Armstrong in London for a 30-minute meeting. Thatcher was determined to change the course of Britain and stop the societal and international collapse. Here was the golden opportunity of her life. Before her was the man who wrote The United States and Britain in Prophecy in 1927 and who could explain the biblical cause and effect. It was a meeting of biblical proportions, just like the kings of Israel meeting with God’s prophet.

To understand the biblical reason for all the curses and terrible events happening in America and the Britain Commonwealth nations, read The United States and Britain in Prophecy for yourself. This book explains how you can escape the curses and find real hope.