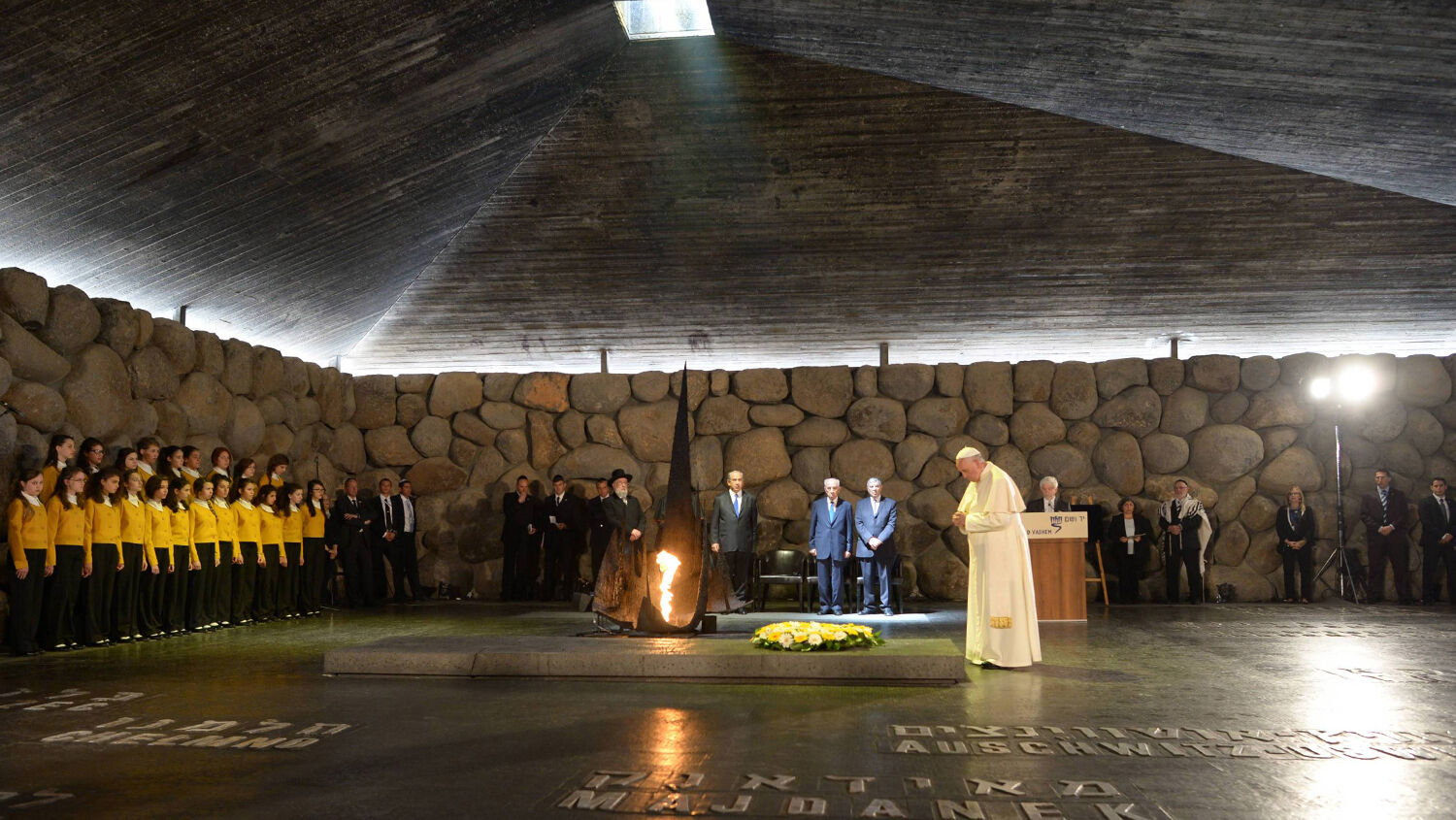 Has the Catholic Church changed?

Dani Dayan, chairman of Yad Vashem (World Holocaust Remembrance Center in Israel), held a private audience at the Vatican on June 9 with Pope Francis. Following the meeting, Dayan described the pope as a friend and an ally in the mission to defeat anti-Semitism. “It is the first time the pope has received, in a private audience, the chairman of Yad Vashem, and I think that this shows the world the importance that Pope Francis, the head of the Catholic Church, attributes to the remembrance of the Holocaust and the fight against anti-Semitism,” Dayan said. While many hope that Jews will be able to live in peace—major conflicts are on the horizon.

“Never forget you have a friend here,” the pope told Dayan.

“I know that when he said a friend, he meant also an ally in the mission that we have embarked on,” Dayan told Vatican Radio.

The two also briefly had an exchange on the Catholic Church’s role in World War ii and how the church deals with the topic today. “When I thanked him for opening the archives of the Vatican of the relevant period of the Holocaust for our researchers, he said very clearly that to open the archives is to make justice,” Dayan said. In March 2020, the Vatican Apostolic Archives were opened for a select group to study the role Pius xii played in World War ii. Just days after opening, however, the archives were closed again for 12 weeks, citing coronavirus concerns.

The pope, Dayan said, told him “there were people who did the right thing, and those who did not” and “the church not only is not afraid of history, the church loves history.” Yet the fact that the archives have been closed for decades seems to suggest otherwise.

Vatican News reported that Dayan is universally recognized as “the ultimate source for Holocaust education, documentation and research.” Yet he doesn’t seem too concerned about the Catholic Church’s past. As early as a.d. 364 the Council of Laodicea decreed, “Christians shall not Judaize and be idle on Saturday but shall work on that day.” This was often violently enforced, and Jews themselves were a target. The Jewish Encyclopedia details how Jews became the victim of the Inquisition in Europe. Jews also suffered at the hands of the crusaders. If you add the Catholic Church’s involvement in World War ii, it’s obvious that this church has a deeply stained history.

Dayan’s visit to the Vatican coincided with the publication of The Pope at War, by David Kertzer. In its book review, Catholic news site Crux Now reported: “The Vatican has long defended its World War ii-era pope, Pius xii, against criticism that he remained silent as the Holocaust unfolded, insisting that he worked quietly behind the scenes to save lives. A new book, citing recently opened Vatican archives, suggests the lives the Vatican worked hardest to save were Jews who had converted to Catholicism or were children of Catholic-Jewish ‘mixed marriages.’” So, the only “bright” light in the overall dark involvement of the church is questionable. The article continued:

Kertzer writes, Pius charted a paralyzingly cautious course to avoid conflict at all costs with the Nazis. Direct orders went to the Vatican newspaper L’Osservatore Romano not to write about German atrocities—and to ensure seamless cooperation with the Fascist dictatorship of Benito Mussolini in the Vatican’s backyard.

That meant never saying a word in public to explicitly denounce SS massacres, even when Jews were being rounded up right outside the Vatican walls, as they were on Oct. 16, 1943, and put on trains bound for Auschwitz.

While some Catholics may have vehemently opposed the leadership of Adolf Hitler and the Nazis, the Vatican itself supported it. There are many historic accounts that show that the Catholic Church even helped Nazis escape through the ratlines to Latin America after the war ended. (Read “The Ratlines” to learn more about this condemning history.) This alone shows that Pius xii role in World War ii can’t be explained by fear alone.

Leaving this concerning history aside, there are also present-day signs that the Catholic Church supports causes that threaten the existence of a Jewish state.

When Pope Francis held a private audience last year with Palestinian leader Mahmoud Abbas, he spoke in favor of a two-state solution. According to a press release, their discussions were “cordial,” showing good relations between the Palestinians and the Vatican. The two have often met in the past and seem to agree on many issues. In 2014, Francis referred to Abbas as a “man of peace and a peacemaker,” after Abbas formed a unity government with the terrorist organization Hamas. One could see Francis’s support for Abbas as support for terrorism.

In his 2014 article “The Dark Side of the Pope’s Visit to Jerusalem,” Trumpet editor in chief Gerald Flurry evaluated even more evidence that warns against Francis and the Catholic Church’s relationship with Israel. While many Jews see the relationship positively, danger is just around the corner. Mr. Flurry wrote:

Look back in history. The fact remains that in the Middle Ages the Catholic Church killed about 50 million people in an Inquisition. That is the extreme to which it will go to increase its power. And it will do everything it can to blot out that history.

Look at the horrors the Vatican-guided “Holy” Roman Empire has committed throughout the ages. The Bible literally gives you a picture of it. God is the greatest and most masterful user of symbols, and He depicts the Holy Roman Empire very appropriately: as a beast—a great monster like you’ve never seen before! A political-military beast guided by a political-religious beast. That Holy Roman Empire is about to burst on the world scene, led by Germany and the Vatican.

This beast is ridden and guided by a woman. “With whom the kings of the earth have committed fornication and the inhabitants of the earth have been made drunk with the wine of her fornication” (Revelation 17:2). God uses these symbols to describe an entity that has intoxicating power over people around the world because it has had relations with the political leaders of many nations. In the Bible, God uses a woman to represent a church. This woman is very powerful. “[A]nd I saw a woman sit upon a scarlet coloured beast, full of names of blasphemy, having seven heads and ten horns. And the woman was arrayed in purple and scarlet colour, and decked with gold and precious stones and pearls, having a golden cup in her hand full of abominations and filthiness of her fornication: And upon her forehead was a name written, mystery, babylon the great, the mother of harlots and abominations of the earth” (verses 3-5).

The Catholic Church has blotted out history. Francis may claim otherwise—the Jews today may ignore this reality too—but the Bible warns emphatically that the deadly ambitions of this institution are about to once again shock the world. As Mr. Flurry discussed in “The Last Crusade,” Daniel 11 prophesies of one final crusade the Vatican will make into the Holy Land. This crusade will be preceded by a double-cross. The Bible reveals that Catholic Europe will be invited as a peacekeeping force into Jerusalem—then it will show its true colors.

I encourage you to read Mr. Flurry’s article “The Dark Side of the Pope’s Visit to Jerusalem” to understand why so many Jews falsely hope in the Catholic Church as their savior. Also read “The Last Crusade” to understand how these events are directly connected to the Second Coming of Jesus Christ.