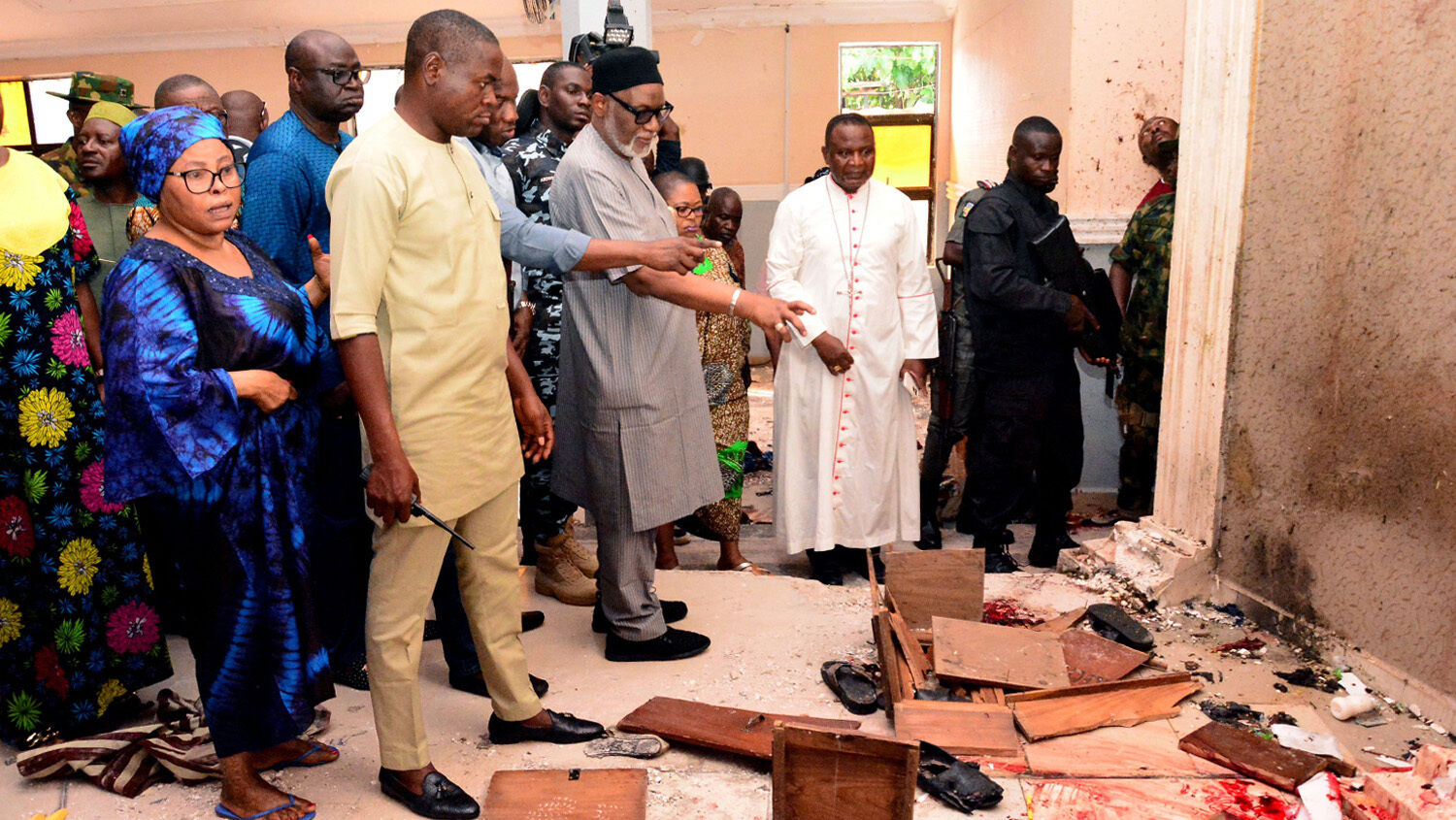 Ondo Governor Rotimi Akeredolu (third from left) points to the bloodstained floor after an attack by gunmen at St. Francis Catholic Church in Owo, southwest Nigeria, on June 5.
AFP via Getty Images

A battle over religious dominance

Gunmen entered a Catholic Pentecost worship service on Sunday, June 5, in southwestern Nigeria in the town of Owo. Around 100 were murdered. According to media reports, explosives were also detonated in the attack and the priest and some worshipers were kidnapped. This is only one of a series of crimes committed against Christian worshipers in the country.

“Jihadist groups have carried out many attacks on churches in Nigeria’s predominantly Muslim north in recent years,” faz.net reported. “This is the first time an attack has been carried out on a church in the predominantly Christian south. Religious conflicts, especially between Muslims and Christians, are a recurring occurrence in the West African country with a population of around 206 million” (Trumpet translation throughout).

The fact that millions in Nigeria belong to either the Catholic Church or other so-called “Christian” churches is a result of centuries of missionary work. As the persecution of Christians in the Middle East and Africa spreads, the Catholic Church and European countries feel obligated to act. In 2012, Italian Foreign Minister Giulio Terzi said, “Stopping these atrocities must be the priority of the international community.” Ten years later, hundreds of Christians continue to die each year in Nigeria.

This is only part of a bigger trend. On January 19, the international nongovernmental organization Open Doors released its annual World Watch List. It wrote: “Across 76 countries, more than 360 million Christians suffer high levels of persecution and discrimination for their faith—an increase of 20 million since last year.”

Of course, one can’t judge the present without understanding history. Catholic Europe has exported Christianity into the Middle East and Africa with the goal to convert the world. This goal, however, clashes with the goals of Islam, which also wants to dominate the world. Muslims believe the presence of Christian communities in Africa and the Middle East is spiritual poison that needs to be eradicated.

European countries already have a military presence in the region with the stated goal to stop terrorism. The Bible reveals that a large-scale confrontation between these two religions and power blocs is imminent. Daniel 11 prophesies an end-time clash between the king of the north and the king of the south. Trumpet editor in chief Gerald Flurry has identified these two power blocs as Catholic Europe, led by Germany, and radical Islam, led by Iran (request his free booklet The King of the South).

Daniel 12:1 shows that the result will be “a time of trouble, such as never was since there was a nation.” Jesus Christ referred to this same time period as “great tribulation” (Matthew 24:21). The cause of the problem is that the whole world has been deceived (Revelation 12:9). Part of this deception comes in the form of religious fanaticism, including the belief that today is the only day of salvation. Yet the day of Pentecost itself teaches that God today is calling only a small firstfruit harvest to prepare to teach and save mankind in the future. The late Herbert W. Armstrong explained this astonishing truth in his booklet Pagan Holidays—or God’s Holy Days—Which? In 1974, Mr. Armstrong explained:

Most people in the “Christian world” suppose Christ came to “save the world,” to start a “soul-winning” crusade. They assume the apostles and their successors started the program of trying to convert the whole world. They believe this is the “day of salvation”—and the only time or age in which humanity may be “saved.”

The world of Christianity has been deceived, and untold millions have died in religious persecutions over the years because of it. Islam has its own various concepts of salvation and world dominance and equally caused much suffering. The world’s major religions have rejected the truth revealed in the Bible and have been deceived by the devil; this will lead to this prophesied final religious clash. To learn more about where the boiling tensions are leading, request a free copy of The King of the South.