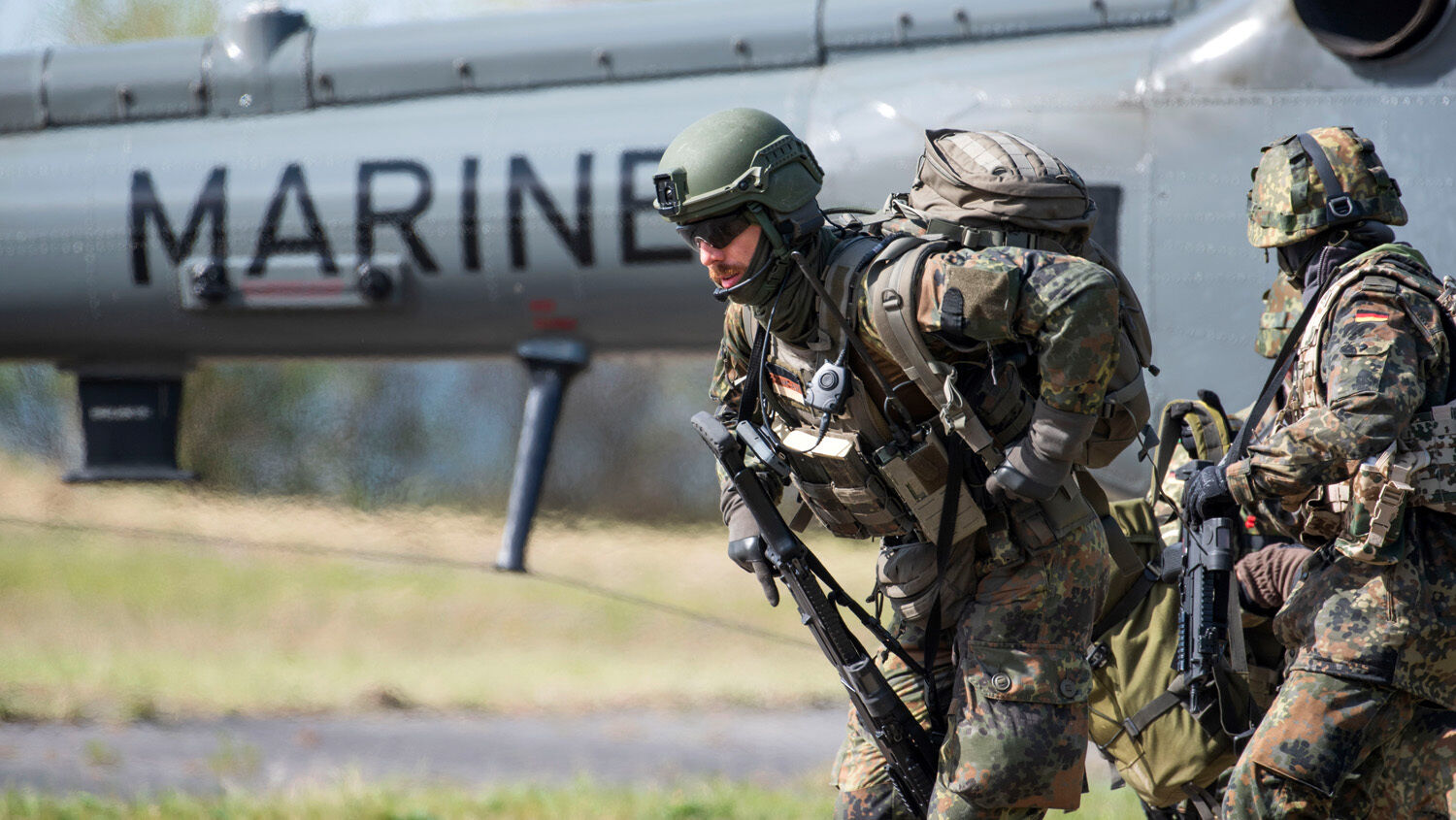 A Bundeswehr helicopter brings soldiers to the port of Sassnitz.
Frank Hormann/picture alliance via Getty Images

People are completely unconcerned about Germany’s rapid military spending. Few ask: What does Germany do when it gets a strong military?

Endless debates are coming to an end as Germany’s government and opposition agreed to change its Basic Law to allow for greater militarization. Around three months ago, Chancellor Olaf Scholz announced an additional €100 billion (us$106.5 billion) in a special fund for the Bundeswehr. On Sunday evening, May 29, the ruling government and the Union parties, the Christian Social Union (csu) and the Christian Democratic Union (cdu), reached an agreement: A law can now be drafted and passed that will allow Germany’s military to stockpile weapons.

German Finance Minister Christian Lindner said: “Together, we will ensure that the Bundeswehr is strengthened in the coming years with €100 billion of additional investment. In the process, nato’s so-called 2 percent target will be achieved on a multiyear average.” The increased military spending will catapult Germany from the seventh-largest military spender to the third-largest.

Reaching nato’s 2 percent target would have been simple for Germany’s ruling coalition: simply reallocate some funds according to the new priorities. However, it seems interested in enshrining its ambitions in the Basic Law, which requires a two-thirds majority of the parliament and thus the approval of Germany’s largest opposition party. By amending the constitution, the fund for military spending will be exempt from a constitutional debt brake.

One of the major hurdles that halted an agreement was the question of how the €100 billion would be spent. While the Greens wanted to spend part of the money for cybersecurity and support for allies, the Union parties, under opposition leader Friedrich Merz, fought to ensure that the special fund would exclusively be used to arm the Bundeswehr. The Greens agreed to the proposal because Lindner assured them that spending on cyber strategy and civilian aid for other states would be financed from the regular budget. This means that more than the €100 billion will be spent in those categories. Welt called it “an expensive compromise.”

Some reports indicate that American F-35s and transport helicopters for Germany’s air force will be procured as fast as possible. These purchases alone will take up a significant amount of the special fund.

For some, the agreement doesn’t go far enough. Some would have liked to see a law that obligates Germany to spend at least 2 percent of its gross domestic product every year on its military rather than in “a multiyear average.” Others, like the Association of Reservists, believe that the €100 billion will not be enough to cover all the needs of the Bundeswehr. Former cdu Member of Parliament and association chairman Patrick Sensburg told Handelsblatt that about €300 billion would be needed “if we want to have an efficient force again.”

German-Foreign-Policy.com wrote: “The Federal Republic of Germany has been working on underpinning its claim to great power with military capabilities for years, not just since the start of the Ukraine war; the Russian invasion of Ukraine now makes it possible to legitimize a long-planned arms buildup.”

What does Germany do when it gets a strong military? This is the question Trumpet editor in chief Gerald Flurry asked in his 2014 article “Germany’s Urgent and Dangerous Military Decision.” He answered: “Do you dare read its history and see? Once that military is in place, it will be put to use! This world doesn’t comprehend that because it doesn’t understand history and Bible prophecy. We just have to look at the truth to understand what we’re dealing with. Everything is moving at lightning speed.”

People are completely unconcerned about Germany’s rapid military spending. They may focus on the many bureaucratic challenges it faces, the lack of leadership, or the internal disputes. But few consider that Germany had even greater hurdles to overcome in the lead-up to World War ii. Today, Germany has an outstanding military industry, access to the most advanced weaponry from the U.S. and European partners, and one of the largest economies in the world. History shows that Germany can use all this power to cause great evil.

But even those with a good understanding of German history are keen to believe that the nation is now a force for good. But Bible prophecy shows that couldn’t be further from the truth. The Bible gives a vivid vision of how a militarized Germany will transform our world. Our booklet Germany and the Holy Roman Empire explains:

God calls this German-led war machine “bitter and hasty” in Habakkuk 1—a very good description. It is full of bitterness, complete with lightning-fast blitzkrieg warfare. God says it is a “nation which shall march through the breadth of the land, to possess the dwellingplaces that are not theirs” (Habakkuk 1:6). God says He is going to “raise up the Chaldeans.” Everything will revolve around Germany. The other countries are just along for the ride.

In verse 7, God gives us more understanding of these fierce, warlike people. “They are terrible and dreadful: their judgment and their dignity shall proceed of themselves.” The Jerusalem Bible renders verse 7, “A people feared and dreaded, from their might proceeds their right, their greatness.” If you know anything about history, you know about whom God is talking. The German people are warriors whose strength gives them the right to do anything they want, anytime they want.

That’s how Germany will act once it is militarily strong. Most people are asleep to that reality, but the Bible tells them to wake up. To understand these prophecies it is crucial to understand Germany’s biblical identity as explained in Germany and the Holy Roman Empire. For an up-to-date explanation of how Germany’s attitude toward war has changed in light of Russia’s aggression, read “Germany Is Transforming Before Your Eyes,” by Mr. Flurry.