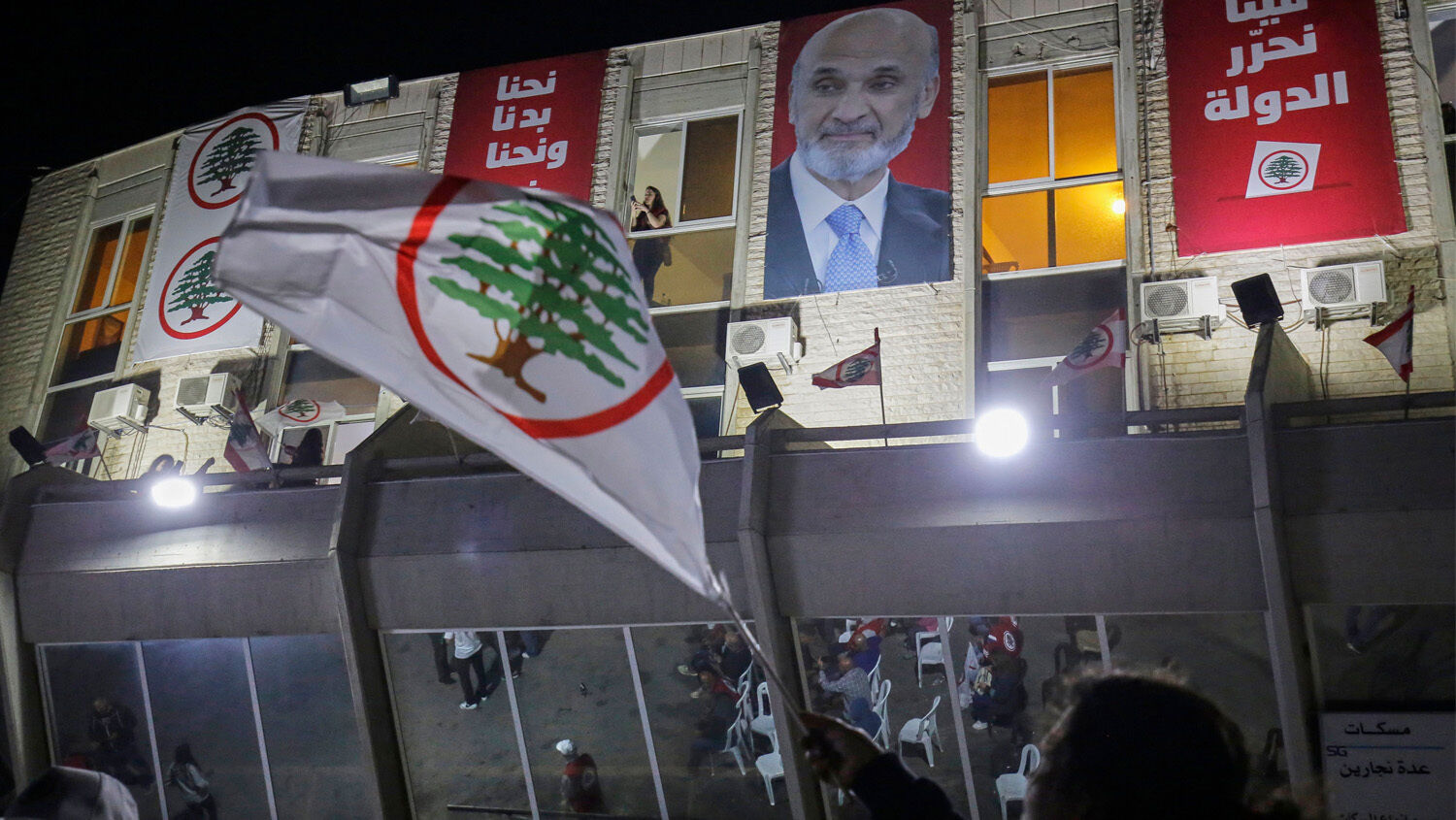 Supporters of the Lebanese Forces party rally in the coastal city of Batroun as they await results following parliamentary elections on May 15. The poster depicts LF leader Samir Geagea.
IBRAHIM CHALHOUB/AFP via Getty Images

Hezbollah loses more than a 10th of its parliamentary seats in most recent election.

Lebanon just concluded its parliamentary elections. The results were announced on May 17. The previous government was led by the Shiite Islamist terrorist group Hezbollah and its allies. But the vote results show Hezbollah’s coalition dropping from 70 to 61 seats.

Government positions are distributed based on Lebanon’s religious mix. The prime minister must be a Sunni Muslim, the speaker of Parliament a Shia Muslim, and the president a Christian. Aoun’s presidential term ends in October. The new Parliament will be in charge of who will replace him.

This may sound like good news. Hezbollah is a notorious jihadist terrorist group with influence all over the world. The group is a proxy of Iran and supports Syrian President Bashar Assad. But any rejoicing would be premature. Hezbollah’s bloc is still the largest in Parliament. Without any party holding a majority, it may be a while before a functioning government can form. The previous government was formed only after 13 months of negotiation.

With Lebanon’s current problems, the last thing it needs is a nonexistent government.

Sixteen independent candidates made it into Parliament this election. Last election, only one independent made it. The election was also compounded by the departure of Future Movement, a Sunni political party led by former Prime Minister Saad Hariri. Hariri announced his retirement from politics in January and said his party would boycott the vote. Many Lebanese are tired of the status quo and want change. But a change to what?

Ever since the 2020 Beirut explosion that destroyed much of Lebanon’s capital, the economy has been spiraling out of control. Hezbollah has been linked to the blast and blamed for economic mismanagement. The latest election reveals Hezbollah and its allies are losing favor. By extension, this means the Islamic Republic of Iran is losing favor. Hariri cited “Iranian influence” as one of the reasons for his boycott.

More and more Lebanese Christians are siding with a former warlord determined to oust Iran’s Islamist puppet. But Islamists generally don’t back down without a fight.

About two thirds of Lebanese are Muslim (split nearly evenly between Sunnis and Shiites). Roughly a third are Christian; most of them Catholic. Lebanon’s religious medley makes it particularly volatile in the turbulent Middle East.

Is Lebanon headed for another civil war?

A prophecy from Psalm 83 sheds light on this. The psalm details an alliance of Middle Eastern peoples who band together against Israel. “For they have consulted together with one consent: they are confederate against thee: The tabernacles of Edom, and the Ishmaelites; of Moab, and the Hagarenes; Gebal, and Ammon, and Amalek; the Philistines with the inhabitants of Tyre; Assur also is joined with them …” (verses 5-8). This psalm describes several ancient peoples that at various times fought with the kingdom of Israel. But history records no instance when all of these nations joined together in a grand alliance against Israel. This psalm is prophetic. But it only makes sense when one learns the modern descendants of these peoples.

Trumpet editor in chief Gerald Flurry identified these nations in his free booklet The King of the South: “Here are the modern names of these nations, as taught at Ambassador College under Herbert W. Armstrong: Edom—Turkey; Ishmaelites—Saudi Arabia; Moab—Jordan; Hagarenes—anciently dwelt in the land known as Syria today; Gebal—Lebanon; Ammon—also Jordan. (We cannot be extremely precise in this understanding, but it gives a good general idea.)” Assur is modern-day Germany. Also of note is the city of Tyre, which still exists in Lebanon today.

Countries like Turkey, Saudi Arabia and Jordan are considered the “moderate Muslim” camp in the Middle East. But Hezbollah is tied to Iran and radical Islam. Iran is mentioned nowhere in this psalm. For this prophecy to be fulfilled, Lebanon has to split from Iran.

In a 2014 television program, Mr. Flurry said: “There’s going to be now a civil war, a bloody civil war in Lebanon for control of Lebanon, and you’re going to see Lebanon and the European power prevail in that battle.”

Samir Geagea’s surge at the polls might suggest enough Lebanese support him trying to oust Hezbollah. Future Movement’s shunning of the election shows that the Sunnis are also tired of Iranian proxy rule. Perhaps the Christians and the Sunnis might take advantage of the coming crisis to kick Hezbollah—and Iran—out of Lebanon once and for all. Only time will tell. But one thing is certain: Lebanon is headed for rocky times.

To learn more, request a free copy of The King of the South.