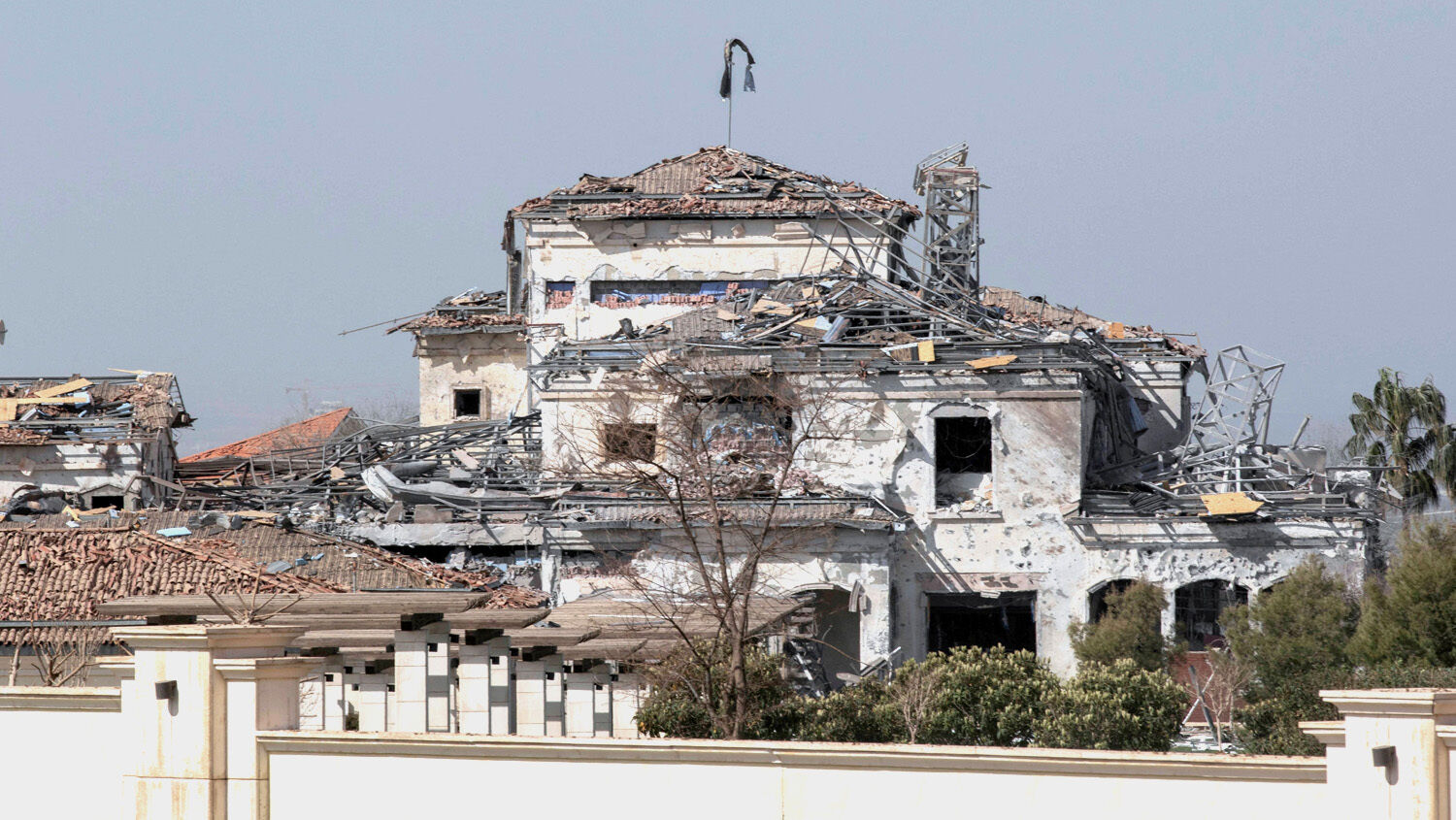 A picture taken on March 13 shows a building damaged after an overnight attack in Erbil, the capital of the northern Iraqi Kurdish autonomous region.
SAFIN HAMED/AFP via Getty Images

How long until Iranian pressure exhausts the remaining opposition in Iraq?

The Islamic Revolutionary Guard Corps (irgc) launched six missiles from Iran’s Nineveh province into Iraq’s Kurdistan region on May 1, setting fire to an oil refinery and striking several other buildings. Iranian attacks are more and more frequent, and neither Iraq nor the United States are stopping them.

Rockets had fallen near the same refinery on April 6, and another attack on March 13 saw 12 missiles slam into the city of Erbil just after midnight. The March 13 strike also targeted a farm owned by wealthy Kurdish businessman Baz Karim Barzinji, whose oil extraction is a lifeline for the region’s economy.

On May 11, the irgc attacked again, reportedly shelling Erbil. In all these instances, the irgc has either claimed responsibility or is strongly believed to be the author of the attacks. Erbil and the Kurdish region in general are the most pro-Western part of Iraq.

Despite efforts by the Kurdish leaders to coordinate a response with the Iraqi government, the irgc continues to rain shells and missiles on Erbil. On top of this, Al-Monitor reported that Iran-linked groups “continue to conduct weekly if not daily attacks across the country.”

Iraq’s government is powerless to stop Iran’s missile barrage because it depends on militias with strong links to Iran. These militias, called Popular Mobilization Units (pmu), are independent armed groups, which are legally part of the Iraqi state’s security forces. In practice, however, the government is incapable of exerting real control over them.

Importantly, the majority of pmu militias are of the Shia sect of Islam, as is the irgc and most of Iran. They have “strong relations to Iran and its security apparatus, particularly the Iranian Revolutionary Guard Corps,” notes the European Union Agency for Asylum. “Although pmu are legally a state institution, in practice they retain autonomous control and influence, some of them with close links to the most important political parties.” Further, they are “considered the most active and most capable in Iraq” and are composed of anywhere from 60,000 to 140,000 fighters.

Al-Monitor quoted an Iraqi oil analyst, saying, “Iraq is a core Iranian asset. Iran is not going to let the Barzanis [the leading family of the Kurds] prize it away.”

“Iran may reckon that, with Joe Biden’s administration distracted elsewhere, it has a chance to tighten its grip on Iraq,” continued Al-Monitor. “The Barzanis may yet fall back into line with Iran. The message from Iran’s rulers ‘is that Iraq is theirs,’ says Hiwa Osman, a Kurdish analyst. ‘And neither America nor Israel can protect you.’”

The Trumpet warned of exactly this scenario—as far back as the 1990s.

“So what will happen to Iraq when America and Britain can no longer support it? There is going to be a radical change in world events,” wrote Trumpet editor in chief Gerald Flurry in a 2003 article titled “Is Iraq About to Fall to Iran?” This was an update of a 1994 article by the same title, in which he also warned of Iraq falling under Iranian influence.

“Saddam Hussein was the only leader that Iran feared,” wrote Mr. Flurry in 2003. “Now the U.S. has taken him out of the way. But does America have the will or strength to guard the spoils of war? Prophecy states that it does not.”

How did he know Iraq would fall to Iran, even before the American invasion of Iraq and the fall of Saddam Hussein? And what is this “radical change in world events” of which he spoke?

The source for this forecast was Bible prophecy. Our free booklet The King of the South identifies Iran as a key player in the Middle East today, and explains how Iran and radical Islam are the “king of the south” spoken of in Daniel 11. This passage prophesies a conflict between Iran-led radical Islam and a European superpower called “the king of the north.” “The clash of these two kings would be hastened greatly if Iraqi oil were to fall into the hands of Iran,” writes Mr. Flurry. “But even a close alliance between the two countries could achieve the same goal.”

Watch Iran’s increasing pressure on Iraq. The world’s number one state sponsor of terrorism will soon have even more power. The “radical change in world events” Mr. Flurry spoke of is unfolding. To understand what it means for you, read our free booklet The King of the South, by Gerald Flurry.