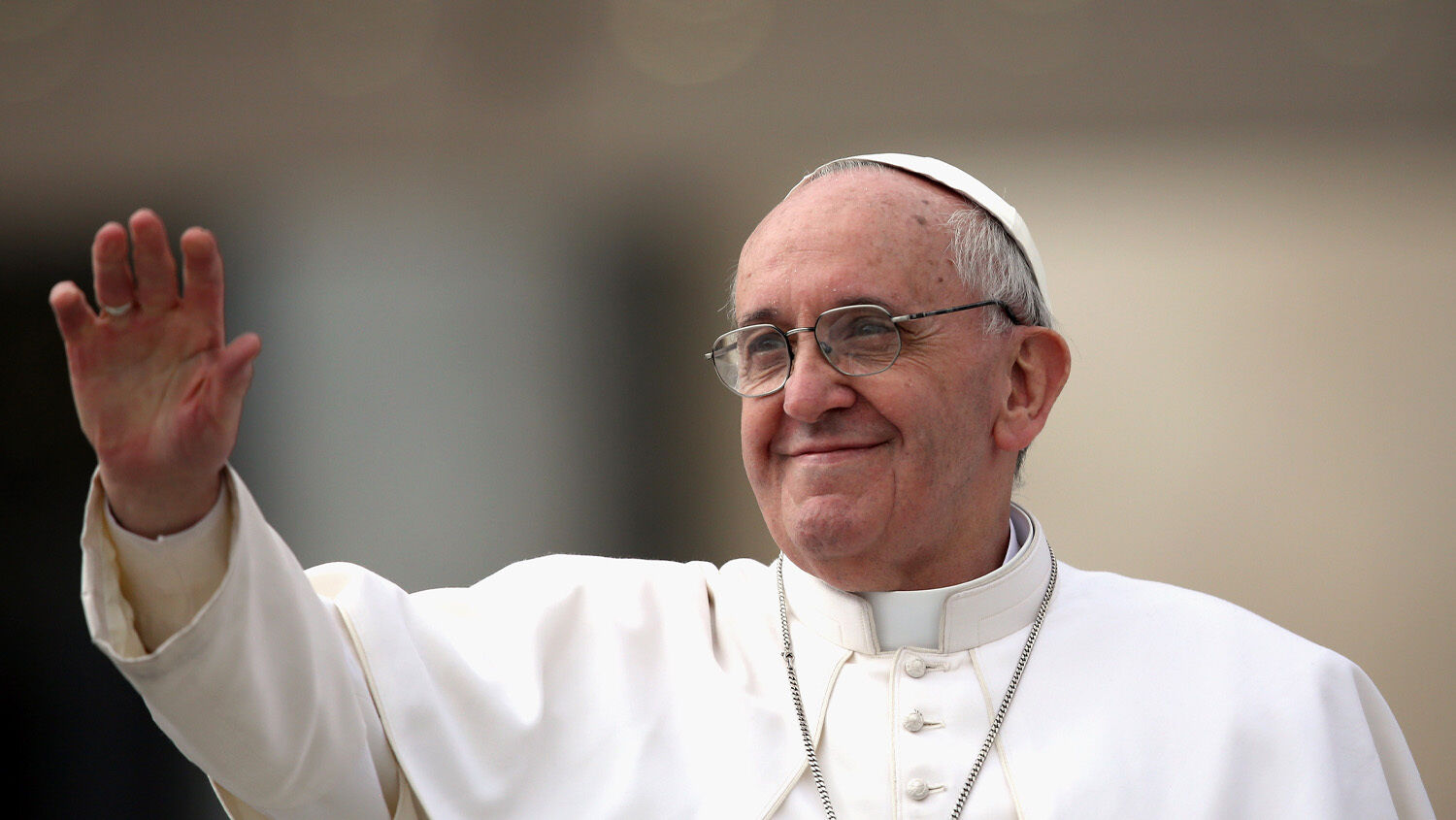 Has America more fault in the war than Vladimir Putin?

By Josué Michels • May 9

Pope Francis has refrained from naming the aggressor in the Ukraine war. He has referred to it as an internal conflict between brothers. He has prayed for peace. But he has been unable to condemn Russia for causing the bloodshed. After weeks of contemplation, he has finally identified the problem: the North Atlantic Treaty Organization. In a May 3 interview with Il Corriere della Sera, Francis said, “nato barking at Russia’s doors” could have alarmed the Kremlin about the alliance’s intentions in Ukraine. He admitted that he “can’t say” if this “provoked” Russia’s anger, but that it might have “facilitated” it.

nato has done much wrong in regions like Yugoslavia, and Russian President Vladimir Putin knows it. Trumpet editor in chief Gerald Flurry explained in “Putin Remembers Yugoslavia” and Germany’s Conquest of the Balkans that the terrible events that occurred in the Balkans were inspired by Germany and the Catholic Church but executed by nato and the United States. Putin has, in part, used the events in Yugoslavia to justify his war in Ukraine. But neither Putin nor the pope call out the Catholic Church or Germany’s involvement in this.

Putin saw the destructive force of nato in Yugoslavia but is most assuredly aware of who was behind it. Even Croatia publicly thanked Germany for breaking up Yugoslavia. In December 1991, Germany, followed by Pope John Paul ii, recognized the breakaway states of Croatia and Slovenia. Most Western leaders opposed this. But Germany and the Vatican appealed to nato to do the dirty work—and shamefully it agreed. As recently as 2019 the pope backed the integration of the Balkan states into the European Union.

Considering Germany’s and the Vatican’s role in this, why does Putin only focus on nato? And why does the pope back this narrative?

In blaming nato, Putin and the pope can hide Russia’s, the Vatican’s and Germany’s imperialistic ambitions.

Although nato has held military drills in the Baltics and deployed troops to Eastern Europe, it was Russia that invaded Crimea in 2014. The West has done comparatively little to help Ukraine regain that part of its country. Since then, the West also hasn’t taken any serious steps to include Ukraine in the nato alliance.

The U.S. has and continues to make some serious mistakes, but that is not the reason Russia invaded Ukraine. Security policy expert Markus Kaim of the German Institute for International and Security Affairs told Bild: “Unfortunately, the pope has repeated well-known Russian propaganda that lacks any basis. Neither has nato promised Russia not to expand eastward, nor is there any hostility toward the Russians—on the contrary” (Trumpet translation throughout).

While nato did expand into former Soviet territory, Western nations have also made many lucrative business deals with Russia that have allowed it to garner the power it now has. Additionally, “nato is a purely defensive alliance,” Bild wrote. “Why Putin should have felt threatened by it, the pope leaves open in his interview.” The pope has signaled to Russia that he supports its narrative more than the narrative of the West.

The pope also ignores Putin’s openly lamenting the fall of the Soviet empire and striving to resurrect “Holy Rus,” which includes Belarus and Ukraine. In Putin’s July 2021, article titled “On the Historical Unity of Russians and Ukrainians,” he claimed that through the conversion of Prince Volodymyr in a.d. 988, Russia, Belarus and Ukraine share the same “baptismal font”: Kyiv. “During the recent Direct Line, when I was asked about Russian-Ukrainian relations, I said that Russians and Ukrainians were one people—a single whole,” Putin wrote. “These words were not driven by some short-term considerations or prompted by the current political context. It is what I have said on numerous occasions and what I firmly believe.”

Does that sound like Putin’s attack on Ukraine was motivated by fear?

The pope insists nato is the problem. Thomas Bremer (an expert on Eastern Europe from Münster), Regina Elsner (a theologian from Berlin), Massimo Faggioli (a theologian who teaches in the U.S.) and Kristina Stoeckl (a sociologist from Innsbruck) noted that the pope’s view of the war as a geopolitical conflict of interests between Russia and the U.S. has “important deficits. … The Russia which claims to need security guarantees against nato enlargement, in reality cannot guarantee security, personal integrity, dignity and peace for its own population and for neighboring countries for two decades. ” They also noted that the Russian Orthodox Church also suppresses protests.

The pope’s stance has offended many in Ukraine. On May 1, the Pillar wrote:

Ukrainians have fiercely debated the Holy See’s approach to the conflict, and the meaning of ecumenical overtures between Pope Francis and Patriarch Kirill of Moscow, the Orthodox patriarch who is widely seen in Ukraine as a supporter of Russia’s invasion. …

But Vyacheslav Okun, a Ukrainian Greek Catholic priest studying at the Pontifical Biblical Institute in Rome, said he doubts that Vatican officials lack information and context about the events in Ukraine. …

Okun said that in his view, Rome is trying at all costs not to lose its ecumenical dialogue with the Moscow Patriarchate.

While Francis has received much criticism over the years from Ukraine, he has received praise from Putin. In a December 17 birthday telegraph to the pope, Putin wrote: “It is hard to overestimate your personal contribution to the development of relations between the Russian Orthodox and Roman Catholic churches, and to the strengthening of the Russian-Vatican ties. I am certain that, with our joint efforts, we will be able to do a lot to protect the rights and interests of the Christians and to ensure the multi-confessional [or interfaith] dialogue.”

When troops surrounded Ukraine in January, Francis prayed “that the country may grow in the spirit of brotherhood and that all hurts, fears and divisions will be overcome.” Some claim the pope has taken this stance because he opposes all military actions or arms deliveries in general. In 2014, however, the pope approved the use of force to “stop” the Islamic State in Iraq from killing Christians as long as the international community coordinated it. But the pope does not call for such international action against Russia. Instead, he blames nato.

In his 2020 article “The Global Ambition to Destroy America and Its President,” theTrumpet.com managing editor Brad Macdonald wrote:

Another key figure with notable animus toward America is Pope Francis. Francis has called U.S.-style capitalism “a new tyranny” and the “dung of the devil.” In 2016, during a visit to the U.S.-Mexico border, the pope said any man who builds a wall couldn’t call himself a Christian; an obvious swipe at Mr. [Donald] Trump.

In his 2016 article “Why Is the Pope Meddling in American Politics?”, Mr. Flurry wrote: “If Pope Francis is to be taken at his word, he could not possibly wish for the leader of the capitalist system to thrive and prosper, continuing to inflict its ‘tyranny’ on the world. If he believes the free market is a force of destruction, then he would feel not only justified, but obligated to use his power to weaken it.” His recent comments and apparent bias toward Russia indicate that this may indeed be the pope’s goal.

Stricken by immorality and many failed geopolitical interventions, America has lost much prestige around the world. We now see world leaders seeking to destroy the little bit of stability America and nato are still providing. But would the world really be better if nato would let Russia and China do what they want? Mr. Flurry wrote in 2016:

[B]iblical prophecies reveal that the United States is in grave danger! Believe it or not, Satan the devil is unleashing a multipronged attack on what has until recently been the most powerful single nation in history. He is working within the population by encouraging sin and perversion. He is turning factions within our people against one another, stirring hatred and violence that are tearing us apart. He is working from within the nation through leaders that are destroying America’s values and embracing lawlessness and corruption. At the same time, he is fomenting hatred among America’s enemies, empowering them to aggressively work against the nation’s interests.

Read “Why Is the Pope Meddling in American Politics?” to understand the pope’s possible motives in singling out nato’s weakness in the conflict. Also read “The Global Ambition to Destroy America and Its President.” To learn about Germany and the Vatican’s imperial ambition, request a free copy of Germany’s Conquest of the Balkans.