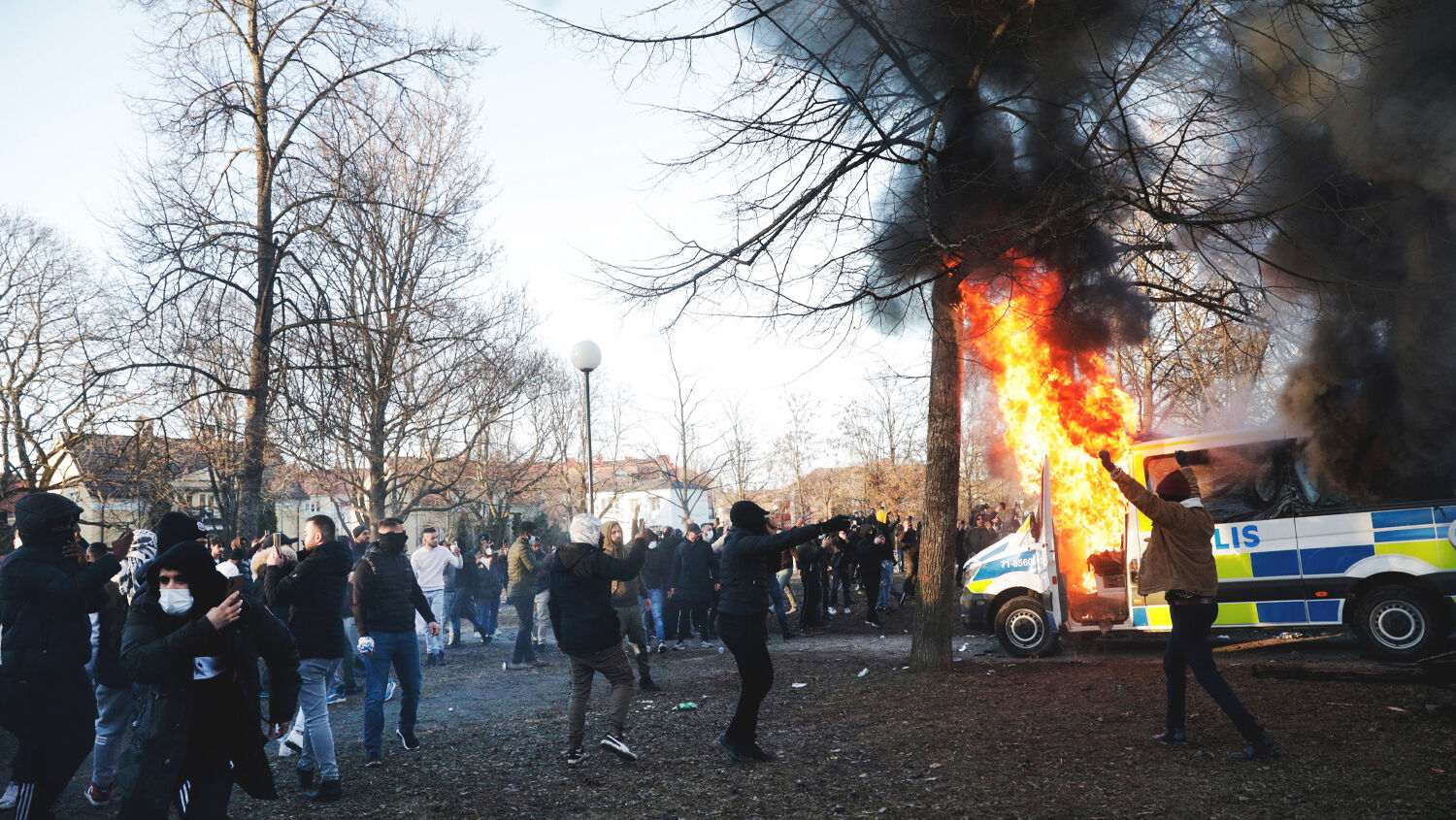 The failed immigration policies of one nation show where Europe is headed.

Riots exploded in Sweden on April 14 after former politician and anti-Islamic figurehead Rasmus Paludan announced he would burn a Koran at an upcoming rally in the city of Linköping. The rioting, looting and burning that followed his announcement continued for two weeks. Facing yet another wave of violence by Islamic immigrants, Swedes are turning against immigration, as are an increasing number of people across Europe.

Shouting “Allahu akbar,” rioters threw rocks at police and firefighters and burned dozens of police and private vehicles. The riots occurred in Stockholm and the nearby cities of Linköping, Örebro and Norrkoping, as well as the southern city of Malmö. Around 100 police officers have been injured, some severely. In Malmö, rioters set a primary school on fire.

Though the rioters were mostly young men, they weren’t the only ones who took part. “Mothers and children threw stones together. The mothers patted the children and cheered,” stated the chief prosecutor of Linköping.

Paludan is well known for his aggressive rhetoric and public burnings of the Koran. While his actions are certainly provocative, the violent response from Sweden’s Islamic community has exposed a massive challenge facing Sweden and all of Europe.

Sweden has a long history with violence committed by immigrants. In 2019, the country faced a wave of bombings perpetrated by feuding clans. Much of it occurred in the same cities currently being ravaged by rioters and looters: Stockholm, Malmö and Linköping, according to the bbc. In Linköping, a bombing in June 2019 destroyed two residential buildings and damaged more than 250 apartments. In 2018, 162 suspected bomb attacks were recorded, according to Reuters. 2019 saw 257 attacks, an increase of 60 percent.

The violence threatens Sweden’s ability to control its territory. The Spectator explained in June 2019:

Wilhelm Agrell, professor of intelligence analysis at Lund University, has warned that the situation has become so dire that the integrity of the Swedish state is in jeopardy. “The state’s monopoly on violence, the actual token of a sovereign government, has been hollowed out bit by bit and no longer exists,” he wrote a few weeks ago. “The armed criminal violence is having effects that are increasingly similar to those of terrorism.”

A new report from the Swedish Defense University warns that clan structures in some immigrant areas are putting the Swedish justice system under “severe stress.” In these parallel societies, the Swedish state is weak, witness intimidation is systematic, and ordinary citizens are pressured to submit to clan rule.

Sweden’s gangs, which mainly operate out of the country’s socioeconomically weak immigrant neighborhoods, do not only use explosives to assert their dominance. Sweden had 45 fatal shootings in so-called criminal environments last year—a 10-fold increase in one generation.

This warning was given in 2019. In 2022, it is clear that the problems have only worsened.

Swedish Prime Minister Magdalena Andersson addressed the riots in a press conference on April 28. In an unusually blunt statement, Andersson criticized current efforts to integrate migrants, saying, “We have parallel societies in Sweden. We live in the same country but in completely different realities.”

Andersson, of Sweden’s Social Democrat party, blamed “segregation” and proposed greater collaboration between police and social programs to address the “poor” level of integration for migrants. In the wake of the 2019 bombings, Sweden’s response was similar: It aimed to increase spending on social programs and grant the police greater authority to spy on mobile communication.

Sweden took in more immigrants than any other European nation in 2015. In 2016, the nation spent $6 billion in an effort to integrate migrants, roughly 6 percent of its total proposed budget for that year, and about 1 percent of its gross domestic product.

The Swedish National Council for Crime Prevention reported in 2021 that since 2000, Sweden has developed one of the highest levels of gun violence in Europe and struggles to control organized crime. The average European country sees 1.6 deaths per million from gun violence each year. In Sweden, that figure is more than double, at 4 per million. Ninety percent of suspects involved in gun violence have a foreign background.

Acknowledging publicly that “parallel societies” exist between natural citizens and immigrants of Islamic background may be seen as an unusual statement for a West European leader. But in Sweden, what was once considered an extreme view is now common. Public opinion is turning against immigration.

Many Swedes have quietly embraced what was formerly far-right rhetoric. “What was extreme in 2015 is mainstream today,” former Swedish ambassador Diana Janse told Foreign Policy. The Sweden Democrats, formerly seen as an extreme right-wing party, are polling at 20 percent. For comparison, the Moderate party is at 22 percent. The popularity of the Sweden Democrats “almost certainly would have grown,” writes Foreign Policy, “had many factions in the center of the spectrum not adopt [sic] the party’s rhetoric on migration.”

“Over the last 20 years, an ancient and homogeneous culture subjected itself—without any prior intention or even public debate—to a demographic transformation of breathtaking proportions,” it continued. As a result, Sweden is starting to close the door on migration.

In June 2016, Sweden stopped allowing an unlimited asylum period; refugees are now given either three-month or three-year visas, in accordance with the European Union’s minimum standards. In 2020, the nation accepted only 13,000 refugees, the lowest number recorded in 30 years.

“Sweden is Europe writ large,” observed Foreign Policy. France, Germany, Greece, Italy, Spain and other European nations face the same problems. These nations are watching the chaos unfolding in Sweden. Will the rest of Europe also reach a breaking point and reverse its stance on migration? Some nations have already tightened their migration policies. After witnessing the alarming rise in bomb attacks in Sweden, neighboring Denmark went so far as to reintroduce border controls in 2019. Candidates promising to limit immigration have surged in popularity in France, Germany, Italy and other European nations.

The Trumpet believes that this trend will continue. In “The Holy Roman Empire Goes Public—Big Time!”, Trumpet editor in chief Gerald Flurry explained:

Events in areas of Stockholm, Malmö and other Swedish cities fit this trend. As efforts to integrate migrants from Islamic backgrounds end in “parallel societies,” chaos and violence, more and more Europeans will search for strong leaders who are willing to discuss and confront the situation. What has happened to Sweden will happen on a much larger scale throughout Europe. And it will have much greater consequences, for Europe and for the world.

Bible prophecy, though written millenniums ago, has specific forecasts about Europe today. Daniel 11:40 shows that Iran, the “king of the south,” will provoke war with Europe, the “king of the north.” (Our free booklet The King of the South explains clearly why we believe that Europe and Iran fulfill these roles.) This shows that Europe likely has many strong disagreements with Iran and radical Islam before this event occurs. Among several other causes, mass migration from majority-Islamic nations is stoking these tensions. The riots in Sweden gained international attention in Iran, drawing protests at the Swedish Embassy in Tehran.

This trend also fits with another essential prophecy about Europe. Revelation 17:10 shows that Europe will experience seven resurrections of the Holy Roman Empire, a combination of church and state ruled by one strong leader. Examples of this in history include the Hitler-Mussolini axis, Napoleon Bonaparte’s French empire and Otto von Bismarck’s unification of Germany. All these resurrections have happened in cooperation with the Catholic Church, which has historically been an enemy of Islam. Though many today see Europe as secular and too advanced for war, the Bible warns that it will soon return to its Christian roots and violently confront radical Islam “like a whirlwind” (Daniel 11:40).

Watch for more countries in Europe to experience a Sweden-like transformation. Bible prophecy warns that the tensions on display in Sweden will spread and help bring about the final resurrection of the deadly and brutal Holy Roman Empire.

To learn more about why you should closely watch the increasing tensions between Europe and radical Islam, read The King of the South, by Gerald Flurry.