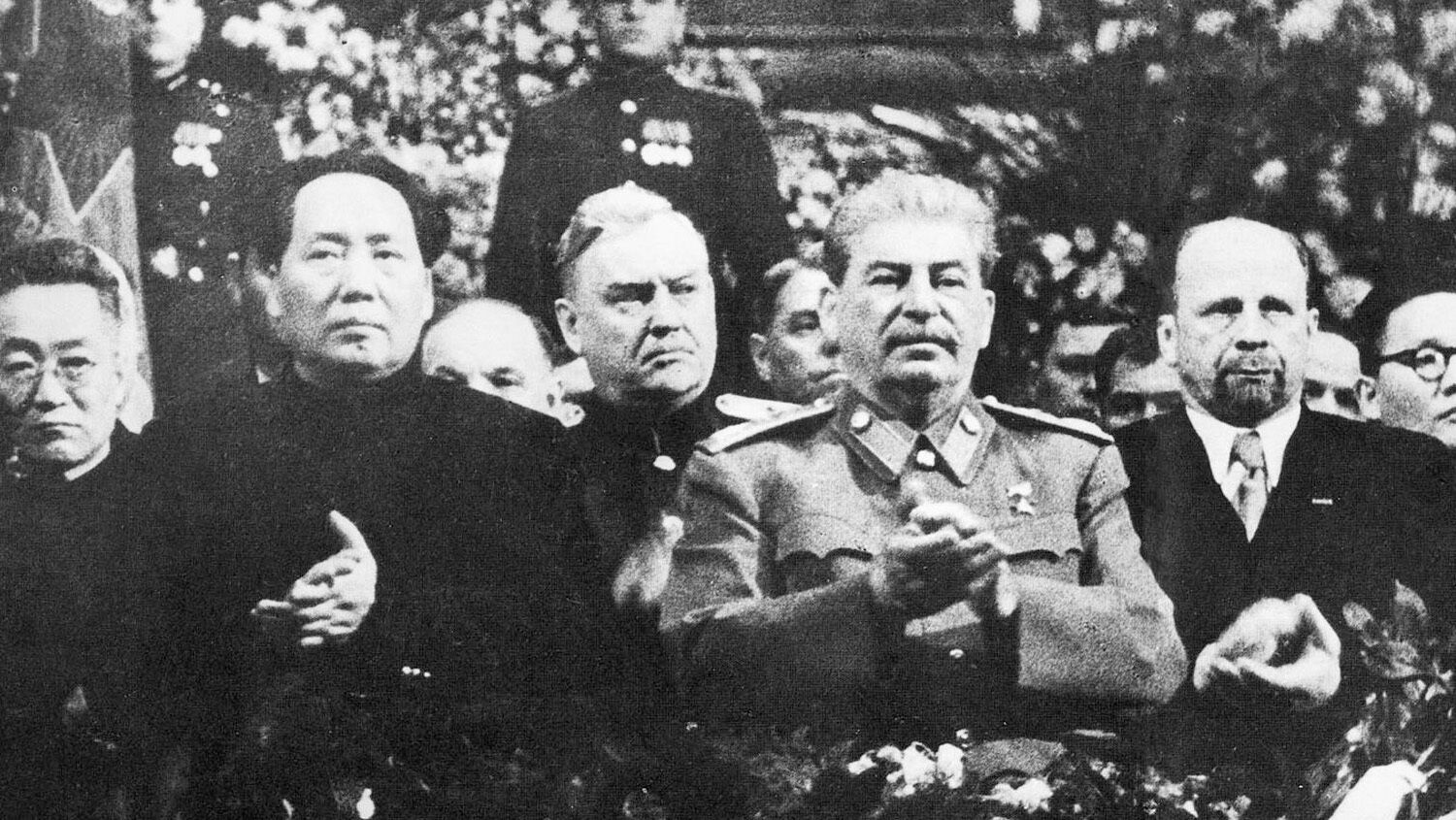 The evil legacy that illuminates the prophesied ‘prince of Russia’

By Abraham Blondeau • May 4

The 1917 Communist revolution in Russia radically changed the course of world history. After promising a communal utopia, Vladimir Lenin seized power. “It was really a dictatorship of the Bolshevik Communist leader, Lenin, actively supported by a small but fanatical following, and employing methods of the utmost ruthlessness,” states the History of Western Civilization. This modus operandi of the Communist Party became a way of life for the Russian people.

Lenin may have planted the anti-God, anti-democratic seeds of Marxism into Russia, but it was his successor, Joseph Stalin, who grew Russia into the dangerous and powerful Soviet Empire. Stalin used the most ruthless, brutal and tyrannical methods imaginable to fulfill his vision of making Russia a Communist superpower. Millions of people perished under his rule, and his shadow still looms large over the geopolitics of today. A century ago, in April 1922, Stalin became secretary of the Communist Central Committee. This position would secure his place as dictator of the Soviet Union only two years later.

Remembering Stalin’s history is important because it provides context and a warning to our world today. It is also relevant because Stalin’s life shares many similarities with Russia’s current dictator, Vladimir Putin. The two men share the same vision, brutality and evil. Understanding Stalin helps us understand Putin, who is playing a key role in the fulfillment of Bible prophecy.

Origins of a Tyrant

Stalin’s real history is obscured by Soviet legend. Joseph Dzugashvili was born in 1878, the son of peasant farmers in Georgia, and was sent to school to become a priest. But the young boy proved to be more of a scrappy ruffian with a strong will. He was kicked out of seminary training for reading Marxist literature and became involved in revolutionary activities. As he became more involved in the Communist movement, he changed his name to Stalin, which is derived from the Russian word for steel.

Stalin had prominent roles in both the revolution and subsequent civil war, but his main skill was in bureaucratic scheming. Lenin’s health declined in 1922, three men rivaled for dominance over the future of the Communist state: Leon Trotsky, Grigory Zinovyev and Stalin. April 1922 was the decisive turning point in who would become the next dictator.”[I]t was his position as secretary general of the party’s Central Committee, from 1922 until his death, that provided the power base for his dictatorship,” states Encyclopedia Britannica. “Besides heading the secretariat, he was also member of the powerful Politburo and of many other interlocking and overlapping committees—an arch-bureaucrat engaged in quietly outmaneuvering brilliant rivals, including Trotsky and Grigory Zinovyev, who despised such mundane organizational work. Because the pockmarked Georgian was so obviously unintellectual, they thought him unintelligent—a gross error, and one literally fatal in their case.” Stalin’s allies, enemies and rivals would continually underestimate his ruthlessness and cunning to their own undoing.

When Lenin died in 1924, Stalin’s control of the Soviet government machinery allowed him to exile and assassinate all rivals and to become dictator. The Russia of the early 1920s was an agrarian nation with a weak economy and a weakening influence on world affairs. Stalin consolidated power in 1927 with the ambition of making the Soviet Union a world force.

In the early 20th century, the Soviet Union comprised the territory of modern-day Russia, most of Ukraine, the Caucasus nations and the nations east of the Caspian Sea. Most of the farmland was owned by peasants, called kulaks. Stalin established the command economy, which gave the national government control over every aspect of the economy. The main goal was to industrialize the entire country. Stalin called for a 300 percent increase in industrial output in key sectors. This was achieved through a series of five-year plans.

“Under these, Russia did become a great industrial nation,” states History of Western Civilization. “Between 1928 and 1938 its production multiplied almost five times. By the latter date Russia was the fourth nation in the world in industrial output, being surpassed only by the United States, Germany and Great Britain.” Stalin also socialized farming, which dispossessed people of their family lands and created collective farms. Ninety-eight percent of all tilled lands in the Soviet Union were government-controlled in 1936. Massive infrastructure projects, like the Volga-White Sea Canal and massive hydroelectric power stations, were built.

All of these measures had an incalculable human cost. “To the Soviet state, the only thing that mattered was the growth of production; the basic material needs of average people were unimportant” (The Making of Europe: Story of the West). Far from being the promised workers’ paradise, the Soviet Union treated its people as slave laborers. The farmers suffered the most. The Making of Europe continues: “In the winter of 1932–1933, outrageous production quotas induced a general famine, especially in the Ukraine. Forced by the state to give up even the animals and crops they would have needed to survive through the winter, between 5 and 7 million peasants starved to death.” People had to eat bugs and tree bark to survive; some even resorted to cannibalism. Mothers killed their infants so they wouldn’t starve to death. Up to 10 million farmers were executed or exiled to Siberia for opposing collectivization.

This was just the beginning. Stalin empowered the Soviet secret police, the nkvd, to crack down on political dissidents. The 1930s saw Stalin’s Great Purges, which he started by executing 70 percent of the Central Committee and most of the powerful, long-time Bolsheviks. The early purges targeted the leadership of the nkvd and military and brought in new leaders loyal to the cult of Stalinism. Millions of people were sent to the gulags to perform forced labor. Any suspicion of political dissidence or opposition would lead to exile in the gulags. Historians believe around 18 million people were condemned to the gulags, with 1.6 million dying in captivity.

Winning the War and the Peace

While Stalin amassed power inside the Soviet Union, he also expanded Russian power on the international stage. The start of the 20th century saw a rise in other dictatorial leaders, namely Adolf Hitler in Germany. Russia’s switch to communism during World War i changed the dynamics of the balance of power in Europe: Great Britain and France could no longer rely upon Russia an ally against Germany. Hitler’s diplomacy with Russia convinced Stalin that Hitler could be trusted, and the Molotov-Ribbentrop Pact of 1939 split Poland between the two nations and secured Germany’s eastern flank.

One of Hitler’s biggest mistakes was attacking Russia before defeating Britain. Although Germany initially had the upper hand, the Russian winter and the tenacity of the Russian people eventually prevailed. Stalin used the same brutal methods in waging war. The warfare on the eastern front between the German and Russian armies was the fiercest and had no mercy. Over 16 million Russians died during World War ii—or 15 percent of the entire population.

Once Russia was on the offensive, Stalin used the opportunity to expand the Soviet empire over Eastern Europe. He also expanded Russian spying into American and British intelligence agencies and was able to penetrate both nations to the highest levels. Stalin was able to view thousands of confidential documents on the Manhattan Project, and a key motivation of racing to Berlin was to acquire key nuclear research and equipment at the University of Berlin. Before the war was over, Stalin was preparing to challenge the United States for world leadership.

At the Yalta Conference, U.S. President Franklin Roosevelt was convinced he could trust Stalin and leave Eastern Europe under Soviet control. Prime Minister Winston Churchill believed Stalin could not be trusted. In 1945, the late Herbert W. Armstrong said on a World Tomorrow program: “What most do not know is that the Germans have their plans for winning the battle of the peace. Yes, I said battle of the peace. That’s a kind of battle we Americans don’t know. We know only one kind of war. We have never lost a war—that is, a military war; but we have never won a conference, where leaders of other nations outfox us in the battle for the peace.” Not only did America lose the battle of the peace to Germany, it also lost it to Stalin’s Russia.

Stalin’s aggressive vision of a great Soviet empire brought the iron curtain down on Eastern Europe. It also established Russia as the opposing superpower to the United States during the Cold War. Stalin instigated the Korean War, and North Korea to this day remains a Stalinist state opposed to America. The Soviet Union’s power peaked under Stalin, and despite his brutality toward his own people, many Russians remember him as the leader who defeated Hitler. Stalin became increasingly paranoid and violent toward the end of his life. He died on March 5, 1953.

Historians estimate that up to 100 million people died during Stalin’s reign of terror, which makes him one of the worst mass murderers in human history.

Despite Stalin’s monstrous legacy, Vladimir Putin views it as the golden age of Soviet power. Both men have mysterious and obscure origins; both hold grudges and seek revenge; both are cold, calculating and skilled bureaucrats; both are evil. Understanding the methods of Stalin actually helps us understand Vladimir Putin.

The invasion of Ukraine is part of Putin’s plan to resurrect the Soviet Union. “I was certainly right in my predication that Russia would also get control of Ukraine!” writes Trumpet editor in chief Gerald Flurry in The Prophesied ‘Prince of Russia’. “I knew because Putin has a long pattern of diabolical evil on the level of Joseph Stalin. An abundance of fruits prove that. The Bible states: ‘by their fruits ye shall know them’ (Matthew 7:20).” Putin has committed acts of mass murder, assassination and ruthlessness; and the Bible says much more is to come in the future. Mr. Flurry continues:

President Putin has military might and the will to use it. America has the power but lacks the will to use it. That is why we grovel before this “evil empire”—as President Ronald Reagan once called it. No leader in Russia has equaled Putin’s diabolical evil since Joseph Stalin. …

Perhaps mass murder, famine and world war on the scale committed by Stalin might seem condemned to the pages of history. But the Bible warns that a prince of Russia, Vladimir Putin, will help orchestrate suffering in the world on a scale that will surpass the evil of Joseph Stalin. One hundred years ago a tyrant rose to power, and we are witnessing another in Russia growing in strength. Yet this man is a hopeful sign, as Mr. Flurry writes: “Vladimir Putin is a sign, literally a SIGN, that Jesus Christ is about to return! This is one of the most inspiring messages in the Bible. What we are seeing in Russia ultimately leads to the transition from man ruling man to God ruling man! And it is almost here! It is just a few short years away.”

To learn more about these urgent Bible prophecies, please read The Prophesied ‘Prince of Russia.’