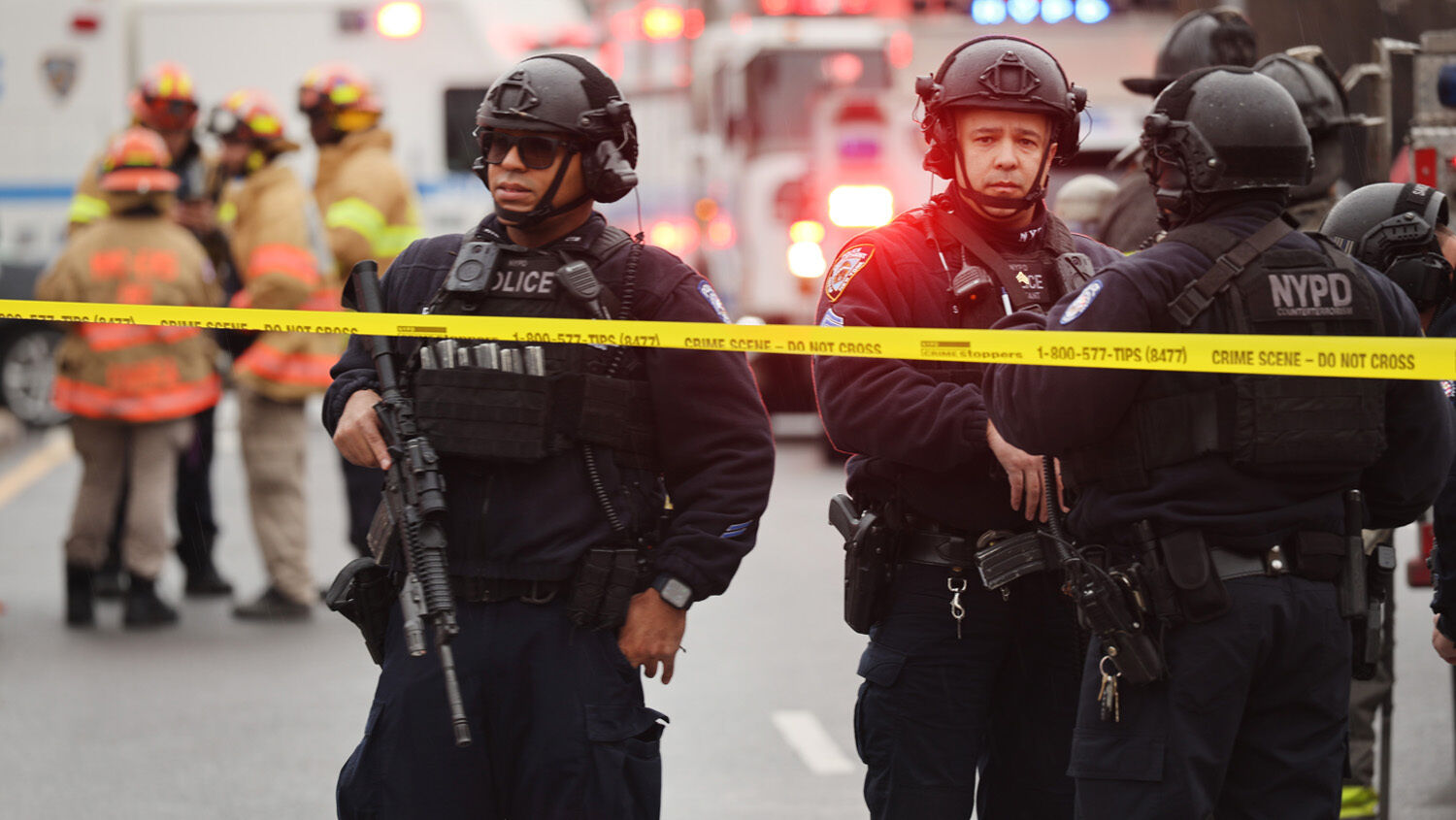 Police and emergency responders gather at the site of a reported shooting of multiple people outside of the 36 Street subway station on April 12 in Brooklyn.
Spencer Platt/Getty Images

Frank Robert James, a 62-year-old black man, is the suspected New York City subway shooter. In almost all reports, the media tiptoed around identifying his race. He was almost universally described only as an “individual” in a green vest with a gas mask. In a nearly 2,000-word article about the attack, the New York Times didn’t mention his race once. cnn barely did better, calling him a “black gentleman.” This in regard to the man who detonated two smoke bombs before firing 33 times into a crowded train car. He managed to shoot 10 people before his gun jammed two minutes into his shooting spree.

New York City police commissioner Keechant Sewell initially said the attack wouldn’t be investigated as an act of terrorism. But after James was arrested on April 13, federal prosecutors charged him with terror-related offenses.

However, the media is still taking pains to avoid mentioning James’s race. They rarely do in cases involving black suspects. The oft supplied reason is to avoid reinforcement of “negative stereotypes.” It’s the same reason why black-on-black crime is so underreported.

Joe Biden told Congress in April 2021: “We won’t ignore what our own intelligence agencies have determined—the most lethal terrorist threat to the homeland today is from white supremacist terrorism. White supremacy is terrorism, and we will not ignore that.”

You don’t even necessarily have to be criminal to be branded a white supremacist today. In many cases, you just have to be white. In contrast, there is a general belief that black people can’t be racist. Many on the left say reverse racism is a myth. But is it possible that some of the black crime is motivated by racism? Are there in fact black supremacists?

As a part of the investigation into his motive, Frank James’s YouTube, Twitter and Facebook content has surfaced. All his accounts have now been deleted. But his beliefs have been discovered, and they’re pretty dark.

The most consistent theme in his videos is his belief that white people are about to enact genocide on the black population. He believes that the situation in America is “no different than what happened in Europe with the Jews.” But while the Jews had the Allies’ support, he tells the black community, “The whole world is against you. And so, the message to me is: I should have gotten a gun and just started shooting ….” That’s a very clear line of reasoning and motive. The media, however, has tried to get ahead of the truth.

The New York Times wrote, “Mr. James, who is black, directed much of his hatred toward black people, whom he often blamed for the way they were treated in the United States.” cnn wrote that hate speech “was a common theme throughout James’s videos, in which he repeatedly espoused hatred toward African-Americans.” The line from the media is, Since Frank James clearly hates black people, he can’t possibly be racist. Therefore, racism wasn’t a motive. They even mention James’s apparent dislike for Kamala Harris and newly confirmed Justice Ketanji Brown Jackson. But in one video, he clearly expresses that his dislike for them is purely from the basis that they married white men.

James is a radical separatist who thinks whites and blacks should have “no contact” with each other. This is because he believes that white people think black people’s “rightful place is as a slave.” As such, he believes that “we need to see more mass shootings.” This is to show that, it’s “not about the shooter—it’s about the environment in which he is, he has to exist.”

James comes off as someone who was repeatedly told that he lives in a racist country and believed it. That’s exactly what the left tells black Americans.

A study by the Washington Free Beacon found that the media is far quicker to mention the race of white killers than blacks. Fifty percent of articles about a white suspect mention his race within the first three paragraphs. This is without even factoring in stories about Kyle Rittenhouse or Derek Chauvin. In contrast, 50 percent of the articles about black suspects don’t mention the race until at least 60 percent of the way into the story, if at all. These statistics are from before the death of George Floyd. After the summer of “mostly peaceful” protests, the disparity widened even further.

Reminder that our nation’s capital looked like this at the beginning of the summer and most Democrats/media shrugged it off as mostly peaceful https://t.co/1zvsLVRuQc

Before those violent Black Lives Matter protests, the media was twice as likely to mention the race of a white suspect as opposed to a black perpetrator. After the summer riots, it became seven times more likely. When stories of white criminals are overreported and even fabricated, a deadly false narrative is created. And when stories of black criminals are underreported, a worrying trend goes unidentified.

On his Facebook and Twitter accounts, Frank James made several posts supporting Black Lives Matter, the Black Liberation and the Nation of Islam. He idealized radicals who attacked whites. He posted a picture of Micah Xavier Johnson who infamously shot and killed five white Dallas police officers in 2016. He even called on other people to follow suit.

In another video, he also defended Anthony Ferrill, the man who shot and killed five co-workers at a Molson Coors plant last year. Ferrill was “discriminated against” according to James, and so nothing would stop “until he started shooting people,” he said. “The vast majority” of white people are racist, he later added.

Frank James didn’t particularly care for other races either. He appears to hate whites the most, but he shares disdain for Asians and Hispanics too. A month ago, he posted a vitriolic video against “Spanish-speakers” on his YouTube channel. He used racial slurs, calling Hispanics “a drain on resources” and nothing more than “machines” created to be laborers.

It’s no coincidence that Sunset Park, the neighborhood surrounding the 36th Street station where the shooting occurred last week, is a 42 percent Latino community.

Frank James was a black supremacist in every sense of the word. “Black nationalism is black unity,” he wrote in one post. It is clear to see the effect of his ideology. He was allowed to post racist videos and statements for years on the same social media platforms that banned a sitting United States president.

The left wants you to know about white supremacists, both real and fabricated. They want you to think that if they are publicly attacked and silenced, society will be perfect. But it’s the Frank Jameses that you need to know about even more. Their stories barely get any airtime. But there are lots of people like Frank James, and they are doing a lot of damage already.

The Most Lethal Threat

Last year, Darrell Edward Brooks was charged for driving through a Christmas Parade in Waukesha. He killed six and injured dozens more. In February, Quintez Brown was charged with attempted murder for entering Jewish Louisville mayoral candidate Craig Greenburg’s headquarters and opening fire. In April 2021, Noah Green killed one and maimed another Capitol police officer after deliberating ramming his vehicle into two police cars. In 2020, Grafton Thomas was charged with murder after allegedly charging into a Hanukah party with a machete. He killed one and injured several others.

A person’s race doesn’t predispose him or her toward a particular set of actions or beliefs. That’s why it’s so important to ask why black supremacists even exist. The leftist ideology supplies the answer.

But none of this is news to the radical left. The leaders, the media—they all know the stats about black-perpetrated crime. They just choose not to report it. They also know that white supremacy isn’t the problem they show it to be. And yet they choose to call it “the most lethal threat” to America.

The truth is, there’s an agenda at play. It is one that is very difficult to discern. But one man, Herbert W. Armstrong, discerned it over five decades ago. In a 1969 issue of his Plain Truth magazine, predecessor to the Trumpet, he asked: “Why are our people unable to recognize the Communist line—the Communist plan and conspiracy—in college and university riots, in propaganda accusing ‘police brutality,’ in ‘black power,’ ‘black panther’ and other slogans, even in ‘civil disobedience’ and ‘nonviolent’ movements of protest which lead to violence?”

Communists are obsessed with seizing power, and they will do it at any cost. They will encourage violence and restlessness. They will create false narratives to stir up anger. They will suppress the truth to ensure their agenda continues as planned. They would rather see the country erupt in violence and chaos—even be destroyed—if it means they can attain power.

Former President Barack Obama praised the protesters and blamed the eruption of lawlessness on the nation’s history of slavery and institutionalized racism, which he called the “original sin of our society.” The idea of original sin is sin that is inborn within us because of our ancestors. Mr. Obama has previously said that racism is in America’s dna. How do you solve that? Did Abraham Lincoln, who at great cost passed a constitutional amendment to end slavery, have racism in his dna? What about the millions of men who fought in the Civil War, and the more than 100,000 who sacrificed their lives, in part to end slavery? Does Mr. Obama have any gratitude for what it has taken to achieve the equality in America today?

Throughout America’s history, race relations have seen dramatic improvements in people blending together and getting along. You never hear about that from these men.

You never hear about it because these people hate this country. They hate its founding principles and ideals. They hate its Judeo-Christian values. And so, they are determined to destroy it. But this hatred is much deeper than just a lust for power. It is actually spiritual in nature.

Many people scoff at the existence of a devil. But the Bible calls Satan a “murderer” (John 8:44). It also says that he and his demons are actively working “in the children of disobedience” (Ephesians 2:2). “These evil spirits are stirring up destructive attitudes and violent actions,” Mr. Flurry continued. “They are behind the murders committed by policemen—and behind the murders of policemen!”

America is under attack. Satan is behind all the murders and the lies by the radical left. He has an agenda to blot out the very name of Israel (2 Kings 14:27). He knows that if the whole country misidentifies the most lethal threat to America, they won’t realize that it is in fact his pernicious influence. Satan murders, lies, divides and destroys. And he is leveling all his power against the U.S. in a way very few people realize.

To gain a clear picture about how serious a threat Satan poses to America, please request your free copy of America Under Attack, by Mr. Flurry.