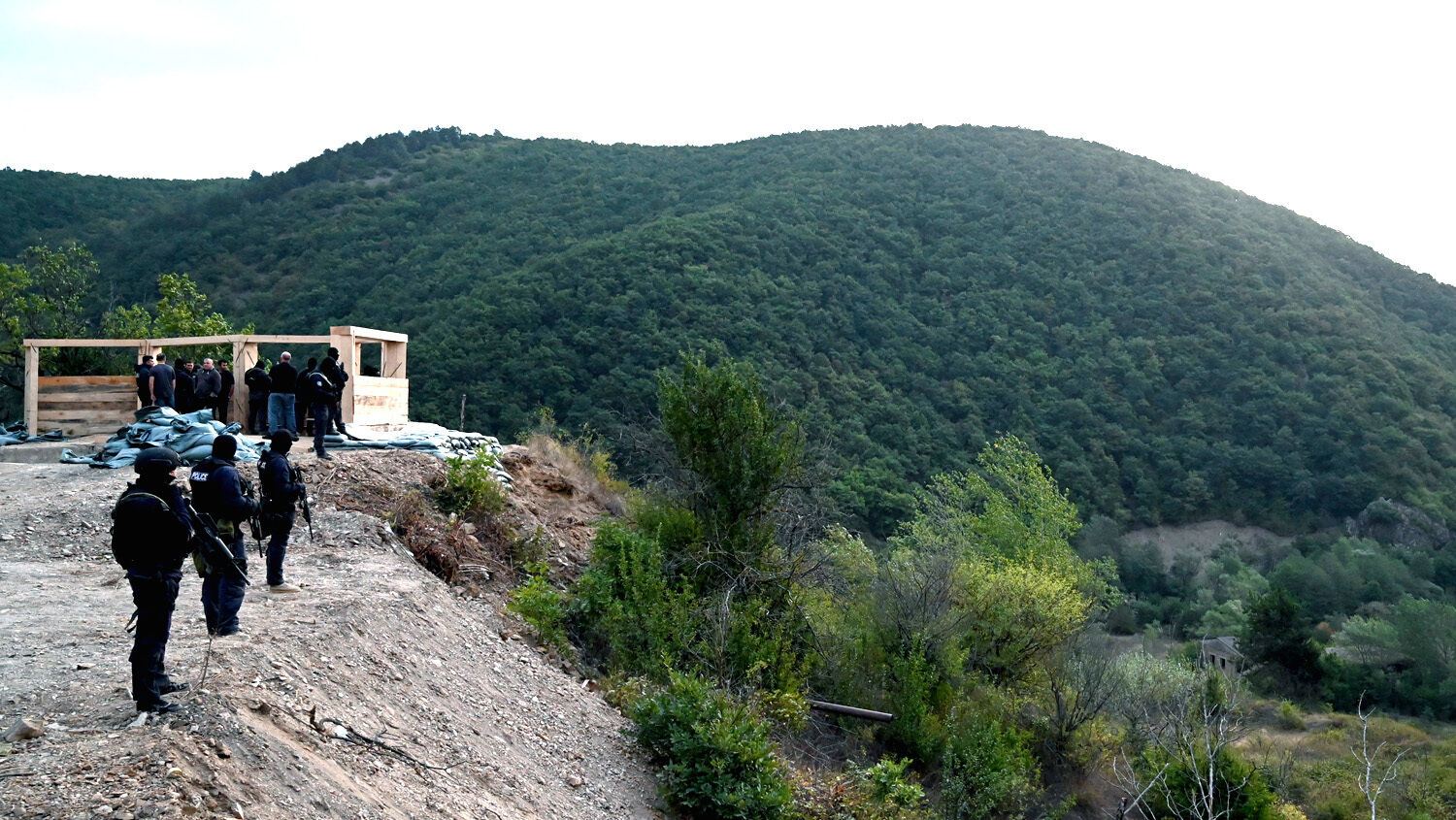 Georgian special police patrol the Georgian-South Ossetian border at a check point in the Kvemo Kartli region some 120 km outside Tbilisi on August 30, 2019.
VANO SHLAMOV/AFP via Getty Images

As Vladimir Putin’s war on Ukraine rages, he has not forgotten other former Soviet republics.

The head of the Georgian region of South Ossetia initiated a referendum process on April 6 designed to make the territory an official part of the Russian Federation. “I believe that unification with Russia is our strategic goal, our path, the aspiration of the people,” Anatoly Bibilov said during an earlier video message on the topic. “[W]e will take the relevant legislative steps shortly, and the Republic of South Ossetia will be part of its historical homeland—Russia.”

Officially, South Ossetia is part of Georgia, a country that was part of the Soviet Union until the bloc’s collapse in 1991. But in 1992, South Ossetian leaders declared independence from Georgia. For more than a decade, the region existed as a semiautonomous entity that was mostly at peace with the rest of Georgia. But in 2004, the Georgian government launched a campaign to regain control of the region, and conflicts between Georgian soldiers and South Ossetian separatists increased.

The tensions exploded in 2008, with Georgia conducting a robust air and ground assault on Tskhinvali, South Ossetia’s primary city. Russian President Vladimir Putin was concerned that a successful Georgian campaign would turn South Ossetia away from Moscow and toward the West—like the bulk of post-Soviet Georgia. So he responded by deploying Russian forces and pushing Georgian soldiers out of South Ossetia and Georgia’s other pro-Russia breakaway region, Abkhazia.

After concluding the invasion, Putin recognized the independence of both South Ossetia and Abkhazia. He then asserted de facto control over the two territories, which together comprise one fifth of Georgia’s internationally recognized land. A handful of Russia’s allies, including Venezuela and Nicaragua, followed Moscow’s lead in recognizing their independence.

Georgia, along with the United States and the European Union, labeled the Russian move an illegal land grab. Georgia maintains that both regions remain part of its territory, a view supported by international law. But such claims mean little as Russia continues to assert more real-world control over the territories, particularly since South Ossetia’s leader aims for Russia to officially annex the region.

Unlike South Ossetia, Abkhazia doesn’t plan on becoming part of the Russian Federation.

Speaker of the Parliament of Abkhazia Valery Kvarchia:

“Russia is a strategic partner of the Republic, but Abkhazia does not plan to be part of the Russian Federation”. pic.twitter.com/89pIhDxrC8

The planned referendum comes as Putin is waging a ruthless military campaign to bring another former Soviet nation—Ukraine—under his thumb. And the timing of Bibilov’s referendum may be related to this war.

Some Georgians have argued on social media that since Putin’s forces are concentrated almost entirely in Ukraine, Georgia should take the opportunity to retake South Ossetia and Abkhazia. “It is very hot in Ukraine today, and we Georgians have a unique opportunity to reclaim our land,” a masked and armed man said in a video uploaded to YouTube on March 4. “We are fighting for unity,” he said. “Therefore, we urge you to take up arms and strike at the enemy. We will never have such a unique chance.”

The video has been viewed more than 350,000 times since publication and represents just one of many Georgian voices calling for their nation to retake South Ossetia and Abkhazia while Russia is distracted elsewhere. Bibilov and his officials have likely been concerned by such calls and believe that making South Ossetia an official part of Russia would silence them. If South Ossetia were grafted into the Russian Federation, Georgia would be far less likely to wage any kind of military campaign on the region. Furthermore, if Georgia did attack a post-annexation South Ossetia, the region would have Russia’s full military support.

When Russia first invaded Georgia, Trumpet editor in chief Gerald Flurry said the move marked the historic “beginning of a dangerous new era” for the world. In the 14 years since, this forecast has proved right in one nation after another.

In 2013, Putin shoved America out of Kyrgyzstan. In 2014, he seized Ukraine’s Crimea and plunged the nation’s east into a state of conflict that has recently exploded into Europe’s most devastating war in 25 years. In 2015, he began positioning Russia as a lead player in the Middle East, a perch from which he helped the murderous Syrian regime hold power and facilitated Iran’s pursuit of nuclear weapons. In 2020, Putin ensured that Belarus’s longtime dictator stayed in power despite a major uprising, effectively turning Belarus into a Russian satellite state. The same year, he stationed thousands of Russian soldiers in Azerbaijan for the first time, where they will remain, apparently, indefinitely. Meanwhile, Putin has repeatedly consorted with China to undermine the international order, has helped North Korea become a more formidable and unpredictable nuclear power, and has propped up Venezuelan dictator Nicolás Maduro as Venezuela bleeds. And all the while, he has been working with Germany to increase both nations’ power over their neighbors.

Time has proved Mr. Flurry was right when he said Putin’s 2008 strike on Georgia was only the start. His forecast that Putin would push the world into a “dangerous new era” was accurate because it was founded on Bible prophecy.

Around the year a.d. 90, the Apostle John prophesied of a future conflict involving a colossal force: “And the number of the army of the horsemen were two hundred thousand thousand” (Revelation 9:16). This military of 200 million troops will be about 15 times larger than any army ever assembled in mankind’s bloodstained history.

Scripture provides several key details about this military force. Revelation 16:12 calls it “the kings of the east,” showing it to be a group of mainly Asian countries. Ezekiel 38 and 39 state that it will be led by the “prince of Rosh, Meshech, and Tubal” (Young’s Literal Translation). Meshech and Tubal are ancient names of the modern cities of Moscow in Russia’s west and Tobolsk toward the east. Rosh is a variation of an ancient name for Russia, as shown in the Jamieson, Fausset and Brown Commentary and other Bible aids.

In his 2017 booklet The Prophesied ‘Prince of Russia,’ Mr. Flurry asserts that the “prince” prophesied in these passages is Vladimir Putin and he explains that Putin’s leadership of Russia, including his belligerence against former Soviet states such as Georgia and Ukraine, shows that major world conflict is fast approaching. But he emphasizes that there is also great hope at the heart of these prophecies. To understand the significance of Putin’s rise in this context, and to learn about the hope that is intimately tied to it, order your free copy of The Prophesied ‘Prince of Russia.’