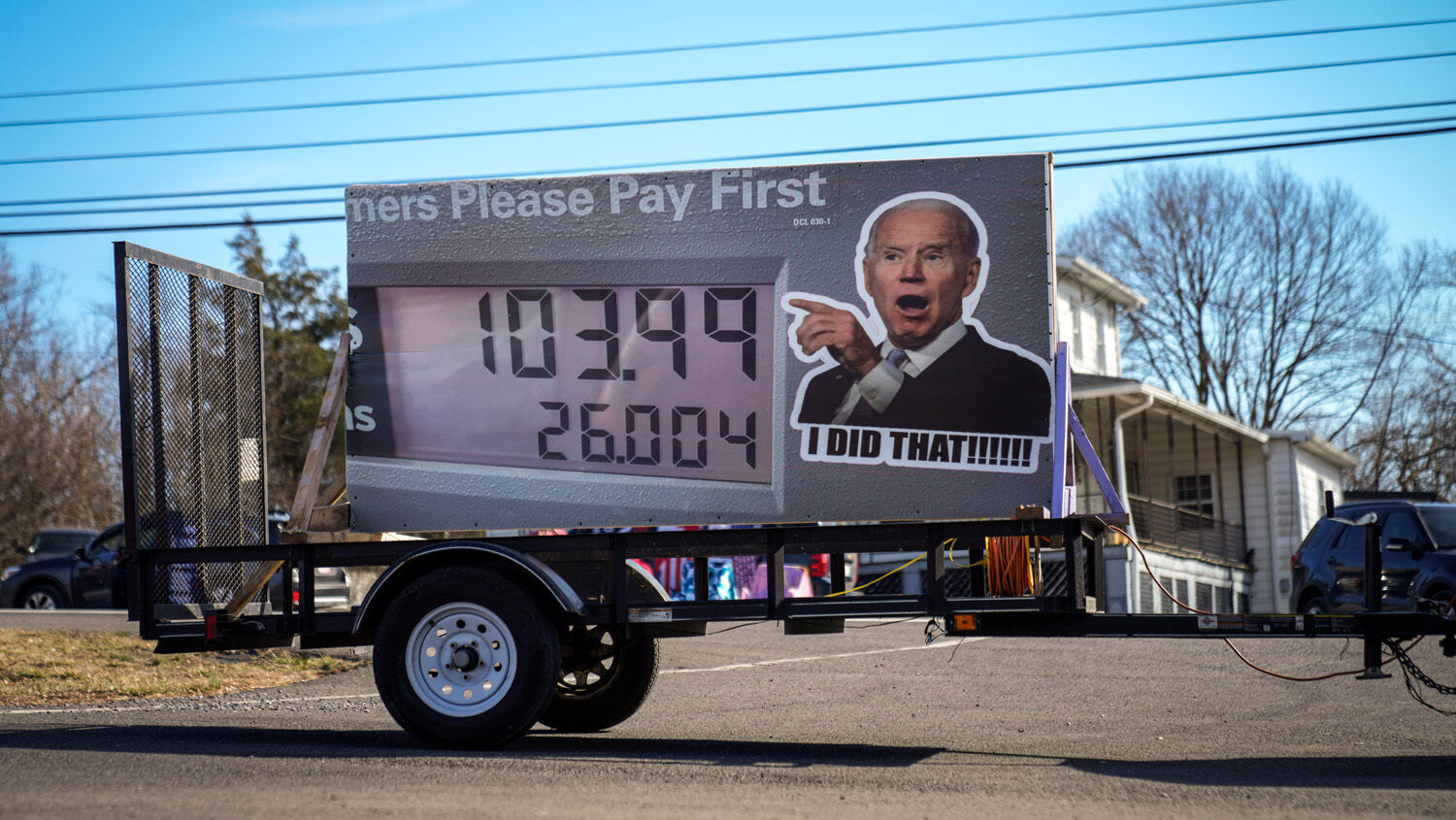 An anti-Biden protest vehicle drives past the Hagerstown Speedway as people gather and await the arrival of the Peoples Convoy of truckers on March 4 in Hagerstown, Maryland.
Drew Angerer/Getty Images

The tide is turning against the radical left as cost-of-living expenses rise.

Rising inflation rates may be uniting Americans against the Biden administration. According to a cbs News/YouGov poll from April 10, nearly 60 percent of Americans do not approve of how Joe Biden is running the country. This is the lowest Biden’s popularity has dropped to date, with about 22 percent of people who allegedly voted for Biden saying they no longer approve of his job performance. This poll reflects a growing sense of dissatisfaction with the current presidential administration as both inflation and illegal immigration rise to four-decade highs.

These Democrats have found a voice in Sen. Joe Manchin, who recently criticized the Biden administration, saying, “The American people deserve the truth about why record inflation is happening and what must be done to control it. Here is the truth: We cannot spend our way to a balanced, healthy economy and continue adding to our $30 trillion national debt. Getting inflation under control will require more aggressive action by a Federal Reserve that waited too long to act. It demands the administration and Congress, Democrats and Republicans alike, support an all-the-above energy policy because that is the only way to bring down the high price of gas and energy while attacking climate change.”

It is understandable that Republicans and Democrats alike are upset with Biden, as half of America’s population has never experienced inflation this high. The Bureau of Labor Statistics reported on April 12 that the Consumer Price Index rose 8.5 percent in the 12 months ending March 31, the biggest increase since the period ending December 1981. The biggest contributors to inflation were shelter (up 3.8 percent), food (up 8.8 percent), new cars (up 12.5 percent), natural gas (up 21.6 percent), used cars (up 35.3 percent), gasoline (up 48.0 percent) and oil (up 70.1 percent).

Bloomberg economists Andrew Husby and Anna Wong estimate that inflation will cost the average American household $5,200 this year. About $2,200 of that will come from pricier food and energy. Many American families will have to make some painful choices about what to cut out of their budget.

With midterm elections coming up this autumn, White House Press Secretary Jen Psaki is trying to deflect blame away from the Biden administration by referring to inflation as “Putin’s price hike.” Yet even the left-wing news outlet cnn acknowledges that inflation was surging before Vladimir Putin invaded Ukraine. And Democratic strategist David Axelrod recently admitted that people “don’t believe” Biden’s claim that Putin is genuinely responsible for price hikes.

Common sense tells you that printing more dollars makes all dollars worthless. About 30 percent of all the dollars in circulation were created since the onset of the covid-19 pandemic. So Putin has little to do with American inflation except that his invasion has pushed oil prices above $100 per barrel. Most Americans realize that Democratic stimulus spending is the main culprit behind inflation, so Republicans are preparing to make inflation a significant campaign issue.

“Our shelves are empty, the supply chain is a mess, and inflation is at the highest in 40 years,” Herschel Walker, a pro-Trump politician running for a Senate seat in Georgia, wrote in a January 19 Twitter post. “President Biden’s approval ratings continue to drop. Why is he focused on social spending? People just want affordable gas and groceries on the shelves!”

This sentiment resonates with many people; many Democrats fear that runaway inflation could bring them midterm-election losses and cost them control of both houses of Congress. Last November, Trumpet editor in chief Gerald Flurry said he believed the tide was beginning to turn against the radical left, and he was right. Many Democrats (about 22 percent if you believe the polls) are experiencing buyer’s remorse now that they see a Biden presidency costing them about $5,200 a year in lost purchasing power. The dire state of the economy could bring a Republican Congress to power next year and perhaps even bring about the triumphant return of Donald Trump in the not-so-distant future.

A Bible prophecy in Amos 7 states that God will save the modern descendants of Israel from destruction in the end time. That means they have one last chance to turn to Him before being carried away into slavery (verse 8). The late Herbert W. Armstrong proved in The United States and Britain in Prophecy that these descendants include America and the other English-speaking nations. So this prophecy is about America being temporarily spared.

The economic problems plaguing the nation threaten to strip America of its superpowers and the dollar of its reserve currency status. God will have to intervene to halt America’s destruction so He can fulfill the promises He made to the Prophet Amos. Please read “What Will Happen After Trump Regains Power,” by Gerald Flurry, to learn more about these promises.