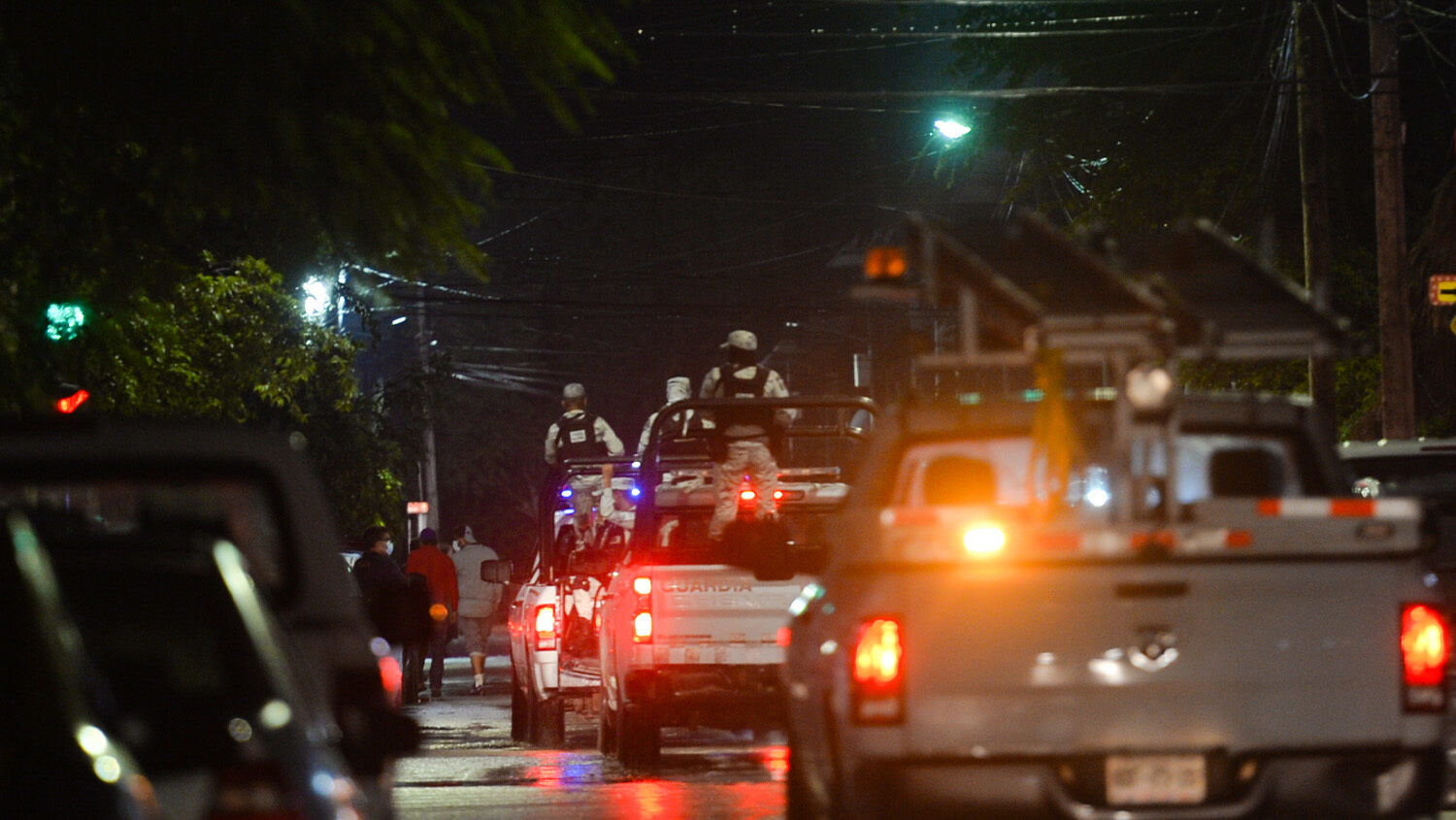 The demand for drugs is devastating Mexico’s tourist utopia.

Peppered throughout the humid jungles of Mexico’s Yucatan Peninsula, near the border with Belize, are the centuries-old decaying skeletons of civilizations. The Mayan civilization, which flourished in Central America hundreds of years ago, now exists in ruins (though millions of their descendants are still around). One of the grandest of these ruins is Chichen Itza. Its famous stepped pyramid and the court for the Maya ball game are now playgrounds for curious tourists.

When I visited the site in 2015, I was awe-inspired by the grandeur of Chichen Itza. I was also disconcerted. The images of skulls and soldiers on Chichen Itza’s walls and pillars show a warrior society. One particular image at the wall of a ball game court shows a player being decapitated. In Chichen Itza, the ancient Maya proudly displayed their culture of blood and death.

I returned to my family’s hotel in the sunny resort town of Playa del Carmen later that evening. The silky smooth sand and turquoise Caribbean Sea seemed like a world away. It was a tranquil, idyllic oasis.

Mexico has labored to make Riviera Maya, the name of this stretch of coastline north of Belize, feel that way. Tourist dollars are an important component of Mexico’s economy. And Riviera Maya brings Mexico almost half its tourism revenue.

But the warrior culture of the ancient Maya is making a comeback. Riviera Maya’s once (relatively) peaceful beaches are now turning into conflict zones.

What’s fueling this surge in murder?

The murder levels in other Mexican states, like Chihuahua, are sustained by drug cartels. Competing with each other to sell drugs to the U.S., the cartels engage in violent turf wars. Like the crises in the northern states, Quintana Roo’s homicide surge is caused by the drug trade. Except this isn’t about controlling the smuggling routes to America. In Quintana Roo’s case, the buyers are coming to Mexico. If you can’t bring the drugs to the users, the users will come to the drugs.

“It’s an ideal arrangement for the cartels,” the Wall Street Journal wrote on April 3. “Rather than risk smuggling drugs to the U.S. and Europe, they cater to American and European tourists looking to buy Mexican-grown [marijuana], Colombian cocaine, ecstasy from Europe and other drugs. … Tulum [another Riviera Maya resort town] has an estimated 10 drug gangs, the majority linked to the country’s biggest drug cartels.”

“Organized crime has diversified into extortion,” it continued. “Gangs demand payments from many businesses in the area. Those who don’t pay risk getting killed or their locales burned down. The head of a local restaurant association recently estimated that 60 percent of restaurants get an extortion call once a day.”

“Everyone, and I mean everyone, is paying extortion money,” says local businessman James Tobin. “From some of the big hotels to the guy at the corner taco stand.”

“They control everything,” an anonymous entrepreneur told El País. “Drugs, alcohol, prostitution, massage parlors … and they have threatened every one.”

The region receives roughly 13 million tourists a year. In 2021, the airport at nearby Cancún was the second-busiest airport for international arrivals after Dubai, United Arab Emirates. That’s a lot of tourist dollars potentially going to murderous drug lords.

Quintana Roo hasn’t turned into Chihuahua or Sinaloa yet. The murder rate is, by Mexican standards, not extreme. But it is increasing. And while the five-star hotels and beach resorts haven’t turned into bombed-out shells yet, the tourist areas are becoming conflict zones more and more.

Last October, two tourists were killed in the crossfire between rival gang members in Tulum. In January, a Playa del Carmen beach club manager was murdered by gunmen in his club’s bathroom. Investigators think this has to do with a canceled rave in the area, costing drug gangs revenue. That same month, two Canadians were gunned down at the prominent Hotel Xcaret. In this case, the victims apparently were involved in some sort of illegal activities and were killed due to debts they held.

Again, Quintana Roo is not experiencing the same violence as much of the rest of the country. But the violence is growing.

Most of the violence in Mexico is related in some fashion to the U.S. drug trade. Drug cartels get rich selling their contraband to Americans. They spill each other’s blood in competition and do so with American-made weapons. The most notorious carnage is more associated with metropolitan Mexico City and the states closer to the U.S. border. None of this is new. But the incidents in the Yucatán Peninsula show that the violence is spreading. In this case, it’s spreading to the part of the country farthest from America. That’s because the tourists—and their appetite for drugs—came over. What is supposed to be an economic lifeline for the region—tourism—is turning into a curse.

The Trumpet has long covered Mexico’s drug plague and its connection with America. This was the topic of the cover story of our May-June 2012 issue. Trumpet contributing editor Brad Macdonald wrote in “Beheading Mexico”:

Meet Billy. He’s an American college student who likes to get together with his buddies and smoke a little weed, or on occasion, snort a little cocaine. Billy doesn’t go “overboard.” He never sells drugs, or steals cars, or robs the elderly to support his hobby. In his mind—and the minds of many Americans—his drug use is simple, cheap fun, and mostly harmless.

Truth is, Billy is an ignorant, selfish fool whose actions are killing people. Neither Billy nor the millions of Americans like him give any thought to the poor Mexican farmers forced at gunpoint to grow marijuana or poppy crops. Or the barbaric cartels that supply him with this dope. Or the wreckage these cartels are causing in Mexico: collapsed businesses, abandoned towns and cities, countless mothers who fear letting their children play in the front yard. Or the tens of thousands who have been killed, kidnapped or wounded in drug-related violence. Or the brave U.S. border agents doing battle with drug cartels.

Obsessed with his own gratification, Billy the American doesn’t realize he’s the cause of so many of Mexico’s dire problems.

This crisis exists because there are tens of millions of Billys in the U.S.

Mr. Macdonald wrote this 10 years ago. Now, Billy is a bit older but still likes to have some fun with his buddies every now and then. They have a favorite resort near Cancún they go to for a week every one or two years. They know a place nearby where they can pop some ecstasy or snort a little cocaine and still be back in time for the buffet. Sure, it’s illegal. But nobody’s stopping them. And besides, people go on vacation to have fun, right?

The truth is, like with drug users in America, Billy’s idea of “fun” is getting people killed. It wasn’t enough for cartels to bring the drugs to Billy; now Billy is going to them. While not every one of the 13 million tourists visiting Riviera Maya each year are drug users, a great many of them are the cause of the problem.

America’s founders wanted the country to be a “city on a hill”—a positive example for others to follow. Instead, it is leading other nations—including its next-door neighbor Mexico—down to the depths of depravity.

“For most Americans, recreational drug use simply isn’t morally or spiritually wrong,” Mr. Macdonald wrote. “America’s appetite for drugs is the result of a spiritual sickness.” He then quoted the first chapter of Isaiah, describing modern-day America under the prophetic name Israel: “Ah sinful nation, a people laden with iniquity, offspring of evildoers, sons who deal corruptly! They have forsaken the Lord, they have despised the Holy One of Israel, they are utterly estranged. … The whole head is sick, and the whole heart faint. From the sole of the foot even to the head, there is no soundness in it, but bruises and sores and bleeding wounds” (verses 4-6; Revised Standard Version). This is how God views America’s insatiable appetite for drugs. And it is causing literal “bruises and sores and bleeding wounds” in Mexico.

Mr. Macdonald continued: “America’s exile from God has left it morally and spiritually sick! Lacking guidance and nourishment from a Supreme Authority, modern America is aimlessly seeking happiness by groveling in its vices, including drug use.” What is the solution?

God provides it a little later in Isaiah 1: “Wash you, make you clean; put away the evil of your doings from before mine eyes; cease to do evil; learn to do well; seek judgement, relieve the oppressed …. Come now, and let us reason together, saith the Lord: though your sins be as scarlet, they shall be as white as snow; though they be red like crimson, they shall be as wool” (verses 16-18).

God wants people—in America, Mexico and the rest of the world—to ultimately turn to Him. He has the power to clean Mexico of its bloodstained beaches. He has the power to “wipe away all tears from their eyes” (Revelation 21:4). And He intends to do so. But humanity first has to learn the lesson that its own ways have brought the world its evils—evils like the violence in Riviera Maya. And humanity has to learn to turn from these ways.