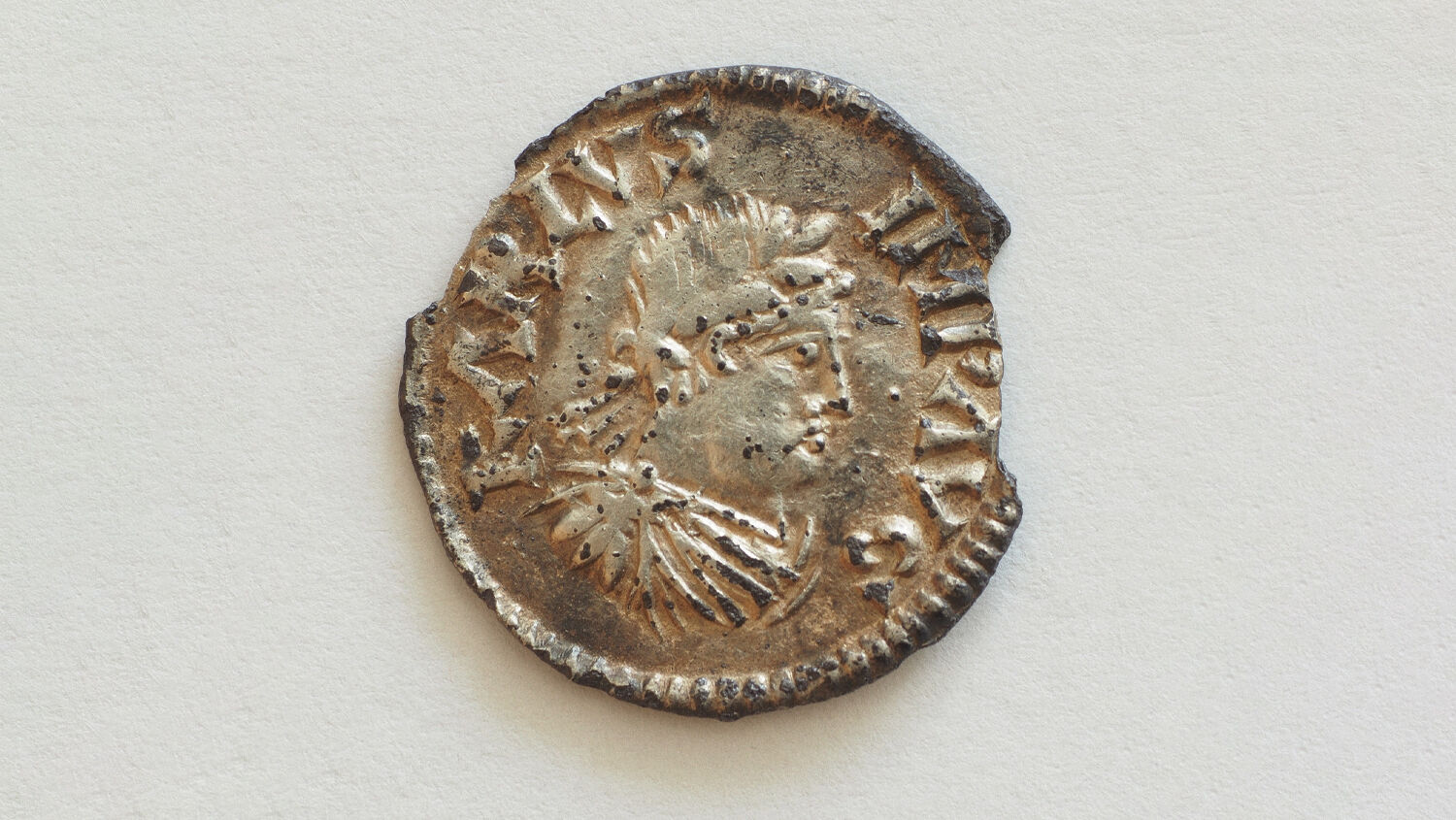 The artifact gives insight into the prophetic past and future of Europe.

A 1,200-year-old silver coin minted with the portrait of Charlemagne has been acquired by The Route Charlemagne Museum in Aachen, Germany. The 0.7-inch-diameter denarius weighs 0.5 ounces. It was purchased by the museum during an eBay auction after a French farmer, raising funds to build a house, found the coin in a collection inherited from his grandfather.

“Charlemagne (ruled a.d. 768 to 814), also known as Charles the Great, was king of the Franks and became the first ruler to unite Western and Central Europe after the fall of the Western Roman Empire in the fifth century a.d.” wrote Laura Geggel at Live Science. “Due to his political power, military might and close relationship with the Vatican, Charlemagne was crowned emperor of the Romans on Christmas day in a.d. 800.” The coin has several details that highlight Charlemagne’s relationship with the pope and the Roman Empire.

On the coin is one of the few portraits made during Charlemagne’s lifetime, and according to Live Science, it “depict[s] Charlemagne and his imperial title: IMP(erator) AVG(ustus), a reference to Emperor Augustus, the first Roman emperor and a title used by the many emperors of the Roman Empire, whom Charlemagne was trying to emulate.”

Frank Pohle, director of Route Charlemagne, told Live Science that the portrait “presents [Charlemagne] really as Roman emperor. … He has the laurel on his hat, which is quite unusual for Frankish kings. He is wearing a dress like a Roman general. … [The use of his portrait] has something to do with his ambitions. That type of coin is quite a good copy of what the Roman emperors did in their times … to use money as a piece of their own marketing purposes.” The coin indicates Charlemagne was resurrecting the traditions of Rome. On the back is a Christian cross inside a building that appears to be a mix between a Roman temple and a church. Historians believe that only 50 coins were minted during Charlemagne’s reign that bear his image, and this particular denarius was most likely minted in Aachen after the year 812.

This coin highlights two key features of European heritage: the traditions of the Roman Empire and of the Roman Catholic Church. Charlemagne represented a key moment in European history when the old Roman Empire transitioned into a broader European context. Historian Paul Johnson writes: “It laid the foundations for the complementary concepts of Christendom and Europe. It projected, in broad outline, the directions which European institutions and culture would take. And it determined in embryo many of the aspects of the world we live in now. We are right to regard the total Christianity of the Carolingian age as one of the great formative phases of human history.” It was an unprecedented moment when the king of the most powerful Germanic tribe, representing the same Germanic tribes that conquered Rome in a.d. 476, resurrected the Roman Empire and religion into his German kingdom that ruled over Western Europe.

Charlemagne’s family rose to power at the Battle of Tours in a.d. 732, when Charles Martel, Charlemagne’s grandfather, defeated the Muslim Moors. A weak Christian Europe gravitated to the protection of the Frankish kingdom’s military power. However, what propelled the Franks to become an empire was Martel’s son, Pepin, entering into a partnership with the Vatican. We explain in our book The Holy Roman Empire in Prophecy:

In northwestern Europe, the region of France today, the Franks had been the first tribe to embrace Catholicism. The Franks first did so for political gain rather than for religious reasons. Mostly of Germanic origin, the Franks exploited the support of the Catholic Church to further their expansionist policies. Never one to miss an opportunity, the Vatican relied on Frankish rulers for protection. It was a union based on politics alone.

This church-state combine peaked in power under Charlemagne, who spread Catholicism and expanded his kingdom by the edge of the sword. Field Marshal Bernard Montgomery of Alamein wrote in A History of Warfare:

It is also a fact that Charlemagne regarded himself as a universal ruler, the partner of the pope, and God’s regent to command on Earth in temporal matters. His missionaries advanced with his armies, often in a real sense as psychological shock-troops, and he regarded it as an essential completion of the conquest of a heathen people to convert them to Christianity. As he wrote to Leo iii:

“Our task is, with the aid of divine piety, to defend the Holy Church of Christ with arms against the attack of pagans and devastation by infidels … Your task, most holy father, is to lift up your hands to God, like Moses, so as to aid our troops; so that through your intercession the Christian people may, with God as its leader and giver [of victory], always and everywhere be victorious over the enemies of His holy name.”

Charlemagne’s military campaigns focused on protecting the pope in Italy and conquering the Saxons, who lived in the lands just below modern-day Denmark. “The Saxons clung to their own faith and refused, even on pain of death, to submit to Roman Catholicism,” writes Trumpet editor in chief Gerald Flurry in A Strong German Leader Is Imminent. “Charlemagne determined to force his brand of Christianity on them with the sword. For years the Saxons obstinately resisted. At one point, out of sheer frustration, Charlemagne executed 4,500 Saxon prisoners. … The violence Charlemagne used to enforce the Catholic religion on his subjects was simply unknown in earlier empires!”

Charlemagne’s violent crusades and close relationship with the pope were key to his ability to unite Christian Europe into a Holy Roman Empire. Charlemagne’s example has cast a shadow over Europe ever since, with tyrants like Napoleon Bonaparte and Adolf Hitler drawing inspiration from the Frankish king. However, the importance of Charlemagne transcends the physical. His empire was prophesied in the Bible as one of the resurrected kingdoms of the Holy Roman Empire. Daniel 2 and 7 prophesy that there would be four world-ruling kingdoms each succeeding one another until the Second Coming of Jesus Christ. The fourth kingdom was the Roman Empire.

The Roman Empire was conquered in a.d. 476 by the Germanic King Theodoric. Yet it was resurrected by each succeeding kingdom that wanted to assume the traditions and powers of Rome. Revelation 17:3 and 7 prophesy that 10 kingdoms would rise following Rome’s conquest; yet the last seven of those kingdoms would be in a church-state relationship with the Roman Catholic Church (verses 9, 12). Those final seven kingdoms are the Holy Roman Empire. Charlemagne was the second resurrection of the Holy Roman Empire. The small, rare denarius confirms the details of this amazing prophecy.

(Please read Mr. Armstrong’s booklet Who or What Is the Prophetic Beast? for a clear explanation of these prophecies. You can also read The Holy Roman Empire in Prophecy for more details on Charlemagne and the other resurrections of this evil empire.)

Charlemagne’s importance is not limited to the past. The Holy Roman Empire is set to be resurrected one more time. And it will be inspired by the traditions of Charlemagne! That bloody history is romanticized by modern Europeans. “Look again at what Otto von Habsburg said about the crown jewels: ‘We do possess a European symbol which belongs to all nations equally; this is the crown of the Holy Roman Empire, which embodies the tradition of Charlemagne,’” Mr. Flurry writes in A Strong German Leader Is Imminent. The “tradition of Charlemagne” is becoming a rallying cry for a fractured Europe seeking unity and leadership.

“Even today, Germany and a great church are working to restore the tradition of Charlemagne,” writes Mr. Flurry. “They have almost completed the structure. Still, it is a mystery to most of the world’s inhabitants. Let the world beware! That power structure is ready to burst on the world scene—again!” Modern Europe is searching for the next Charlemagne. The Continent is being jolted by the Russian invasion of Ukraine, an influx of migrants, and a leadership crisis. Yet this leader will not bring peace, but war and suffering. Mr. Flurry warns:

It will all be done in the spirit of Charlemagne. Most people won’t awaken out of their stupor until it’s too late!

The silver Charlemagne coin helps bring into public view the traditions of Charlemagne. The seventh and final resurrection of the Holy Roman Empire is about to burst on the world scene as a new military superpower in alliance with the Catholic Church. It will again embark on bloody crusades, this time not with swords and spears but with nuclear weapons. The only thing this empire is waiting for is its next emperor, coming in the spirit of Charlemagne.

To read more about these world-changing prophecies, please read A Strong German Leader Is Imminent.