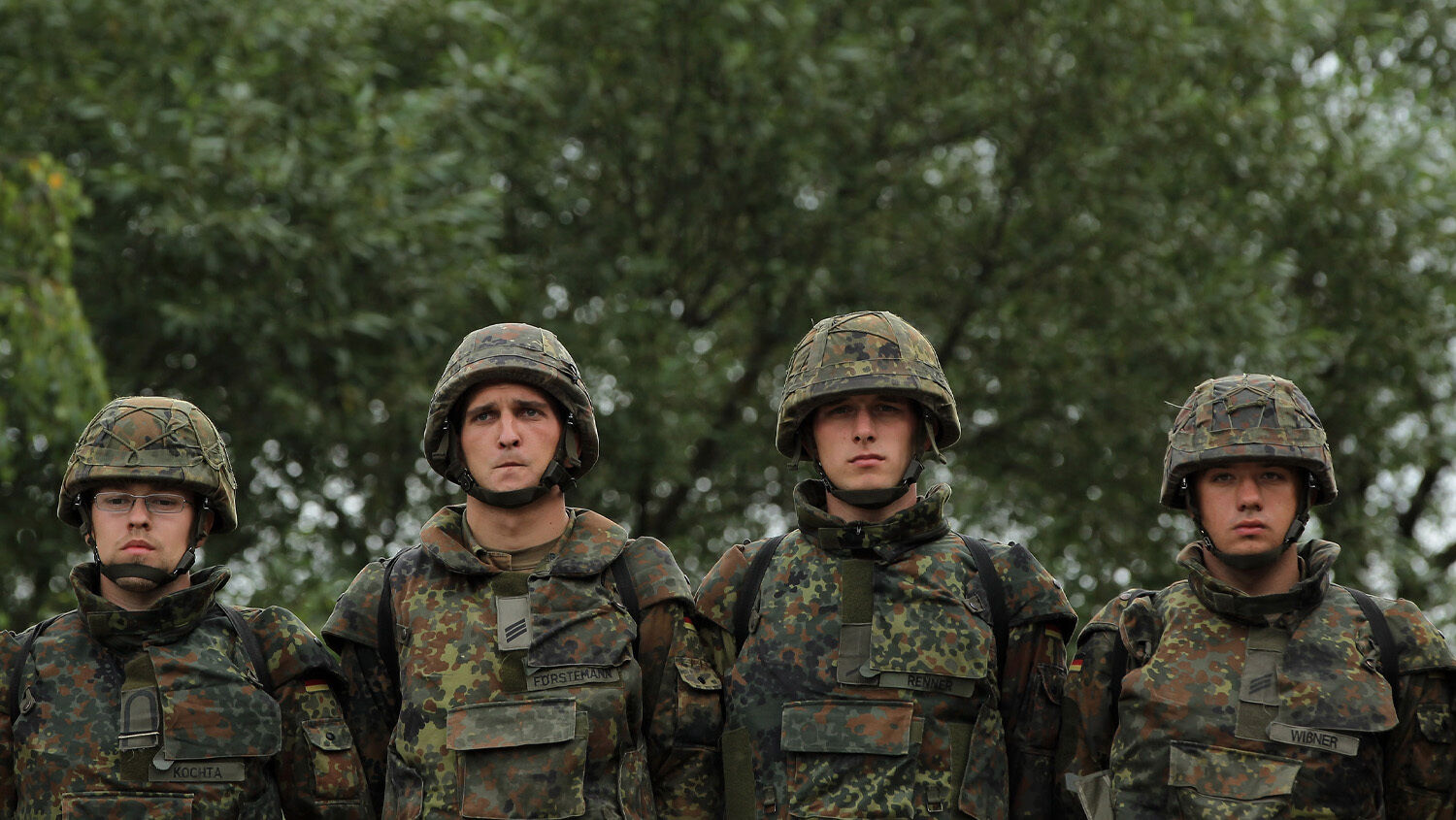 Germany’s former foreign minister Heiko Maas warned in 2021 of developments in artificial intelligence (AI) that have led to a new kind of arms race. Beyond AI, technological supremacy in general will prove to be the deciding factor in future wars. Technological advances are becoming increasingly more important than the number of soldiers, tanks or fighter jets a country has. To digitize its armed forces, Germany is using the French company Atos, a global leader in information technology. This company has an interesting connection to a man the Trumpet watches closely.

Germany’s former defense minister and founder of the consultant firm Spitzberg Partners, Karl-Theodor zu Guttenberg, is keenly interested in AI and other technologies or technology enablers. For the last two years, he has attended Atos’s Summit Talks in Austria. This year the event took place on March 31.

Companies like Atos seek to advance the possibilities of modern technology while others fear potential dangers.

AI is seen as an enabling technology that revolutionizes the speed of modern warfare. The Asian Times headlined in 2019, “Robot Drone Swarms Could Take the Place of Nukes.”

Germany is thinking of future warfare that involves more than tanks and airplanes. This means the whole communication system of the troops has to change. Drones can detect targets and eliminate them in a fraction of the time that humans can make a decision. The increased speed at which warfare takes place requires different kinds of communication between the systems.

European companies are joining forces to make this advanced warfare reality. Atos and Airbus have been working together in the field of cybersecurity.

Airbus received orders in February 2020 to begin developing a Future Combat Air System, which Airbus said “is a key instrument in ensuring future European autonomy and sovereignty in defense and security.” This concept involves drones, fighter jets, cargo aircraft and satellites armed with laser weaponry—all connected through artificial intelligence. “An increase in future air combat complexity has paved the way for unmanned systems to be deployed alongside fighter jets—synergizing to become Manned-Unmanned Teams,” Airbus states.

Drones can be mass produced and equipped with conventional or biological weapons. Swarms of drones could devastate entire cities. In “How to Combat the Dark Side of AI,” Forbes discussed the danger of AI and the associated algorithms. While many fear that AI could run amok and go out of control, advances in human-controlled warfare are already frightening enough—and much more realistic.

Guttenberg has urged Europe to not sleep through the latest developments of digitalization. “Europe is the 60-year-old who is still at the disco,” he lamented in 2018. Guttenberg has invested in blockchain-based technologies in the financial sector and advised companies to do the same long before most people even knew about these developments.

In 2019, Guttenberg told Die Presse, “A targeted hacker attack on infrastructure is of economic relevance.” He explained that nations are no longer defended “with tanks,” bombs are no longer necessary to “interrupt a water supply. This is reality today and can trigger new acts of war.”

With the help of advanced technologies, drones can be programmed to kill and cyberattacks can cripple infrastructure. But to have the cutting edge in such a future war, one has to understand the tedious details of modern technology.

In “Connected Defense: Vision 2020,” Atos noted: “Today defense is facing a new world of tension: Conflicts are on the rise and information dominance is key. … Atos’s 40 years of experience in electronic warfare, its airborne and naval equipment, its intelligence and battle management know-how has led to a natural growth of expertise and these solutions are among the most advanced on the market.”

As Europe becomes increasingly aware of these realities, Atos is able to secure it lucrative contracts.

The German Bundeswehr hired esg and Atos to digitize the German armed forces to improve its command and control information system. “I am delighted that the Bundeswehr has placed its trust in us to implement this important project,” Günter Koinegg, head of Public Sector & Defense Atos Central Europe, said.

Because of all these drastic advances in military technology, more and more research is done to help the human soldiers keep up.

France has already established the legal framework to create such soldiers. According to reports published in 2020 medical treatments, prosthetics and implants can be used to improve “physical, cognitive, perceptive and psychological capacities.” This technology would allow for location tracking or connectivity with weapons systems and other soldiers. cnn reported at the time: “Other possible interventions considered by the armed forces ethics committee include medical treatments to prevent pain, stress and fatigue, and substances that would improve mental resilience if a soldier were taken prisoner.”

The limitations of soldiers have bothered world leaders for centuries. During World War ii, Adolf Hitler’s scientists tested humans in the most extreme conditions to see if, for example, soldiers could endure the altitudes of airplanes and if Soviet troops had a genetic superior resistance to the cold. Hitler’s scientists researched the limits of the human body; today’s scientists continue the research and seek to overcome the same obstacles.

There are many ways technology can revolutionize warfare. We have already seen unbelievable progress in some fields; other scientific goals seem unattainable. One thing, however, is certain: Warfare is becoming increasingly complex and dangerous.

But leaving speculations aside, the Bible reveals that Europe will get a strong leader who has in-depth understanding of warfare. Daniel 8:23 reads: “And in the latter time of their kingdom, when the transgressors are come to the full, a king of fierce countenance, and understanding dark sentences, shall stand up.”

Trumpet editor in chief Gerald Flurry explained this verse in his article “Is KT zu Guttenberg About to Come to Power?” He wrote:

Daniel 8:23 supplies some key details about this soon-coming German strongman. The Theological Wordbook of the Old Testament explains that the expression “dark sentences” means riddles, difficult or dark speeches, or sayings, questions or parables. It says it is used “at a higher social level,” and cites a similar word being used in 1 Kings 10:1, where the Queen of Sheba tested Solomon’s reputation for wisdom with “hard questions.” Josephus’s Antiquities of the Jews likewise describes “Hiram of Tyre sending Solomon sophisms and enigmatical sayings.” These world leaders brought enigmas to Solomon hoping to learn from his wisdom. Gesenius’ Hebrew-Chaldee Lexicon defines “dark sentences” as “twisted, involved, subtlety, fraud, enigma.” This strongman grasps things that are obscure, things you can’t understand without explanation or interpretation.

This is revealing insight. The prophesied strongman operates on a high social level; he is capable of understanding and solving complex issues and questions. He is brilliant and sophisticated, and he has intellectual depth and power. The context shows he enjoys notoriety and fame for it.

Chancellor [Angela] Merkel called Guttenberg “a magnet who fascinates the people.” Die Welt called him a “talented orator who can cast a spell over people.” Such charisma is rare, even among politicians, and it is one of Guttenberg’s defining traits.

Guttenberg’s understanding of modern warfare and his connection with a company like Atos may be another sign that he could fulfill this prophecy. For a detailed explanation of why the Trumpet watches this former defense minister, read “Is KT zu Guttenberg About to Come to Power?”