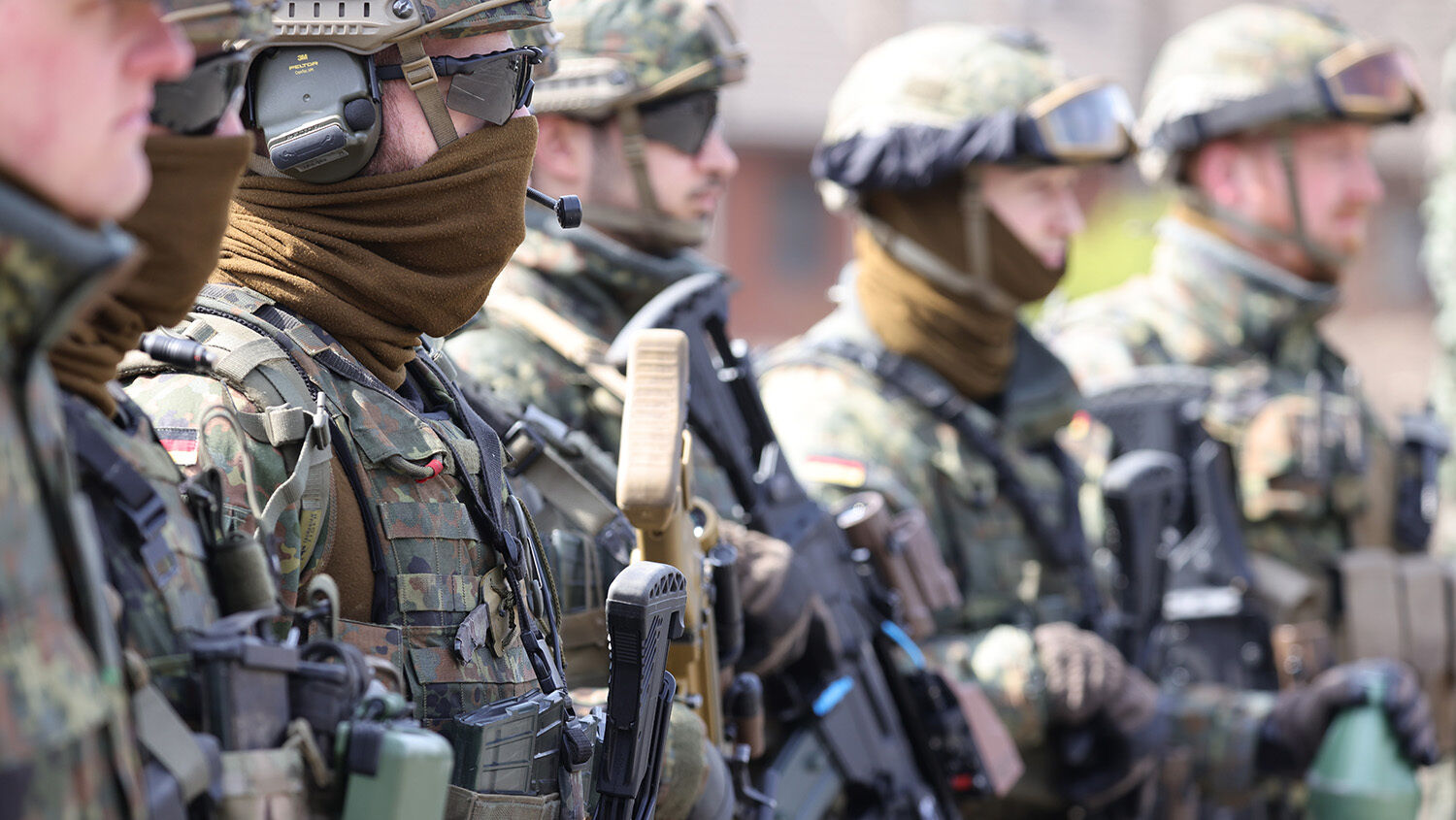 The vast majority approves of an immediate dramatic militarization—but legislators struggle with the immediate and the dramatic.

The 24th of February 2022 marks a zeitwende [watershed moment] in the history of our Continent. With the attack on Ukraine, Russian President [Vladimir] Putin has started a war of aggression in cold blood. …

It is clear that we must invest much more in the security of our country—in order to protect our freedom and our democracy. This is a major national undertaking. The goal is a powerful, cutting-edge, progressive Bundeswehr that can be relied upon to protect us. …

The 2022 federal budget will provide a one-off sum of €100 billion for the fund. We will use this money for necessary investments and armament projects. We will now—year after year—invest more than 2 percent of our gross domestic product in our defense.

Scholz appeared bold, speaking after discussing the matter with only a small group of people. He appeared to be displaying strong leadership. Germany would budget around $84 billion for its military, in addition to a $113 billion fund to stock up its military.

However, this rapid militarization is facing hurdles.

“Shortly after Scholz’s speech aired, the research community rushed to crunch the numbers and make sense of the proposal,” Alexandra Marksteiner, researcher with the sipri Military Expenditure and Arms Production Program, noted on March 25. “Now that additional information has emerged, some conclusions of those early days have to be revisited. First, the two promises made that day—to allocate at least 2 percent of Germany’s gdp to defense and to commit €100 billion to military procurement—now appear to be complementary, not supplementary. The funds [used to stock up the military] are not to be spent in addition to the 2 percent of gdp goal, but instead would go toward reaching it. Second, while the stocking fund] is to be created and appropriated in 2022, the funds are not intended to be spent in one go but, instead, over several years.”

Most Germans approved of Scholz’s announcement, but legislators watered it down, as many of them have other priorities. Scholz’s clearly stated goals started to get muddled in political Berlin. Henning Hoff, executive editor of Internationale Politik Quarterly, noted:

There is a word on everyone’s lips in Berlin’s political and think tank world right now: zeitenwende.

One month on, however, some doubt has returned, and not only to this columnist, as to how far Germany’s zeitenwende will actually go and how consequential it will really turn out to be. …

Doubts start to set in, for instance, when it comes to the headline-grabbing announcement of Scholz’s speech, the jump in defense spending the Scholz government of Social Democrats (spd), Greens, and the business-friendly Free Democrats (fdp) is now committed to. Germany will be meeting and surpassing the nato goal of spending 2 percent of gdp on defense, Scholz promised, which would mean defense budgets of over €70 billion annually—a jump of over 40 percent. However, the budget plans Finance Minister and fdp leader Christian Lindner presented in March only foresee an increase of roughly 7 percent, to something just shy of €50 billion.

The government now hopes to use the special fund of $113 billion to make the difference. But even here the governing politicians and opposition parties quarrel over how the fund should be enshrined into the Basic Law and how it should be spent. Adding to the difficulty, the amendment of the Basic Law needs a two-thirds majority and some of Scholz’s left-leaning government coalition are expected to vote against it.

“The long-neglected Bundeswehr is to be better equipped and armed with a €100 billion package. But the mammoth program is a long time coming. What’s the problem?” Tagesshau wrote on March 23. “Most recently cdu/csu faction leader [Friedrich] Merz had repeatedly claimed that the impression had been created that the chancellor wanted to achieve the nato 2 percent target for the Bundeswehr starting this year and spend the additional €100 billion in special funds. But the traffic light coalition is only prepared to increase defense spending in line with nato targets. After all, that alone would be a massive increase in military spending.”

Merz understood Scholz like many others did: Germany will reach the 2 percent this year and use the $113 billion as an additional fund from the 2022 budget.

Scholz lacks the leadership to fulfill the pledge he made on February 27. His own government is giving him such a hard time that he can’t clearly define how what he said should be interpreted. Meanwhile, Russia is destroying cities in Ukraine. Many fear that Scholz will continue the course of his predecessor Angela Merkel and allow Vladimir Putin free rein.

Trumpet editor in chief Gerald Flurry has warned for years about Europe’s leadership vacuum. “Somebody has to provide some leadership and stand up to Putin,” he writes in A Strong German Leader Is Imminent. He further warns:

Vladimir Putin is taking advantage of Merkel and the West. There is an enormous lack of leadership in Europe and the world today—and Putin sees it! He is marching through Ukraine, taking vast areas of land that don’t belong to him, just like Adolf Hitler did leading up to and during World War ii. History is repeating itself. We are giving away chunks of Ukraine just like we gave away chunks of Czechoslovakia. We did nothing when Hitler invaded Austria and took it over, and we are going the same way again.

Mr. Flurry then goes on to explain that the Bible prophesies that Europe will get its own strongman.

Daniel 8 specifically records a prophecy for “the time of the end” (verse 17). “And in the latter time of their kingdom, when the transgressors are come to the full, a king of fierce countenance, and understanding dark sentences, shall stand up” (verse 23).

Calling this leader a “king” implies authority unlike anything we see in Germany today. In a time of great crisis, the German people could very well give up their democracy for a leader who gets things done. “If a real crisis develops, will the Germans call for a new führer?” Mr. Flurry asked in December 1991. “Your Bible says that is going to happen!” This is a bold statement based on numerous Bible prophecies that we are about to see fulfilled.

Request a free copy of A Strong German Leader Is Imminent to understand the Bible’s warning about what is happening in Germany today.