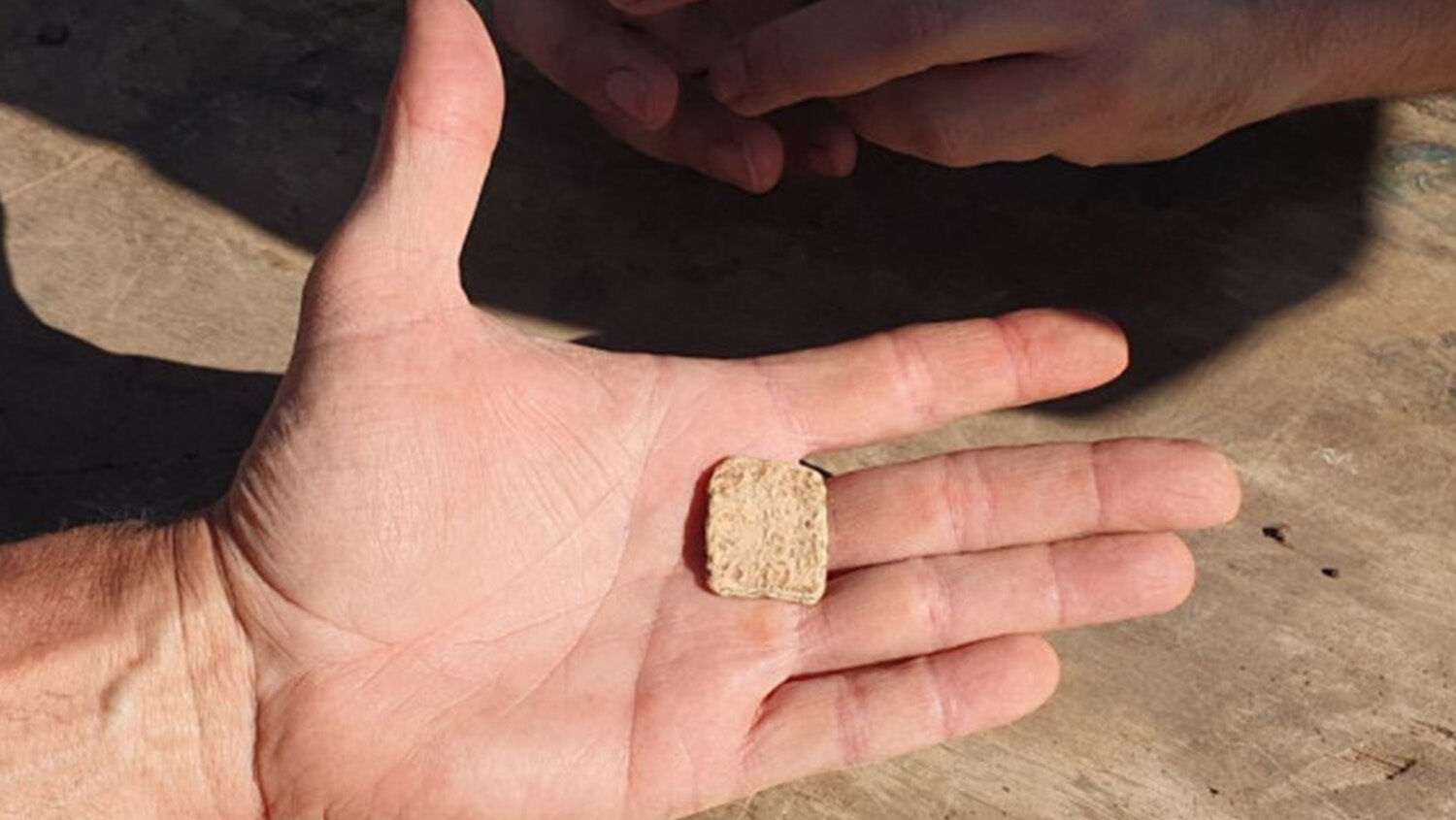 “And it shall come to pass, when the Lord thy God hath brought thee in unto the land whither thou goest to possess it, that thou shalt put the blessing upon mount Gerizim, and the curse upon mount Ebal. … Then Joshua built an altar unto the Lord God of Israel in mount Ebal, As Moses the servant of the Lord commanded …” (Deuteronomy 11:29; Joshua 8:30-31).

In a March 24 press release, archaeologist Dr. Scott Stripling and his team of archaeologists and epigraphers announced the stunning discovery of a folded lead “curse tablet” following the wet-sifting of excavation fills at the site of “Joshua’s Altar” on Mount Ebal.

The curse tablet (or defixio), unearthed in 2019 and believed to date to the Late Bronze Age ii period (circa 1400–1200 b.c.), contains an ancient Hebrew inscription consisting of 40 thus-far deciphered letters. The discovery is “centuries older than any known Hebrew inscription from ancient Israel,” according to the press release.

In a joint effort between four scientists from the Academy of Sciences of the Czech Republic and two esteemed epigraphers (Prof. Gershon Galil of the University of Haifa and Pieter Gert van der Veen of Johannes Gutenberg-Universität Mainz), the proto-alphabetic inscription was deciphered to read the following:

The tablet remarkably parallels the accounts in Deuteronomy 11, 27 and Joshua 8, which record the construction of an altar on this site at the time of the Israelite conquest of Canaan and the declaration of “curses” from it (as part of a wider address establishing blessings for obedience and curses for disobedience—i.e. Deuteronomy 28; 30:19). Not only that, the inscription is by far the earliest to use the Hebrew name of the God of Israel: yhw (predating the next-earliest inscription by centuries). In the words of Professor Galil, the discovery represents “absolutely the most important inscription ever found in Israel.”

There are two stone altars at the site: a large early Iron Age i altar (circa 1200 b.c.), which was built over the top of a smaller, original Late Bronze Age ii altar (both excavated by the late Haifa University archaeologist Adam Zertal). The earlier, original altar is believed by Stripling to be Joshua’s altar and, together with the inscribed amulet, could date up to two centuries earlier than the larger altar—thus matching the biblical time frame for this event.

In 2019, Stripling and his Associates for Biblical Research team, with the support of the Shomron Regional Council, wet-sifted Zertal’s excavated material. According to Stripling, “These types of amulets are well known in the Hellenistic and Roman periods, but Zertal’s excavated pottery dated to the Iron Age i [circa 1200–1100 b.c.] and Late Bronze Age [1550–1200 b.c.] [O]ur discovery of a Late Bronze Age inscription stunned me.”

The proto-alphabetic tablet was examined with advanced tomographic scans. Galil noted that it was written in symmetrical “chiastic parallelism.” Reading the script proved “tedious,” but “each day we recovered new letters and words written in a very ancient script,” noted van der Veen.

Thus far, only preserved text contained within the folded tablet has been translated and published as part of the press release; the more heavily damaged script on the outside of the tablet is still being studied. A peer-reviewed article on the discovery is currently in process and will be published later this year by Stripling, Galil, van der Veen, Ivana Kumpova, Jaroslav Valach, Daniel Vavrik and Michal Vopalensky.

Analysis of the lead by Hebrew University’s Prof. Naama Yahalom-Mack revealed that the metal had been sourced from the Greek mining area Laurion, a site notable for Late Bronze Age lead products (thus matching with the epigraphic and archaeological material).

As it stands, the discovery looks set to revolutionize academic discourse about numerous elements, including the antiquity of the Hebrew alphabet and literacy, as well as the wider historicity of the Israelite conquest and accounts contained in the Torah—long dismissed by many scholars as mythical. As Stripling commented in the press conference, the discovery has “enormous implications.”

Zertal himself admitted in his book A Nation Born: “My academic background made it difficult for me to accept the idea of Joshua’s altar being a tangible reality …. I had argued that the Bible was full of myths.” Yet he noted, “If we have found material evidence of a story as early as Joshua’s, who knows how far back the archaeological record can take us.”

Zertal, who was treated at the time by many of his colleagues as a pariah for his eventual conclusions about Joshua’s altar (save for the notable support and encouragement of Prof. Benjamin Mazar), unfortunately died seven years before being able to see the fruits of the current wet-sifting project.

At the press conference, Professor Galil noted: “The scribe that wrote this could have written every chapter in the Bible. Now no one can claim that the Bible was written in later periods … because they were able to write it very, very early.”

Stripling followed up, citing the book of Job (the earliest book in the canon), which mentions the writing of text on lead with an “iron pen.” “Oh that my words were now written! oh that they were printed in a book! That they were graven with an iron pen and lead …” (Job 19:23-24).

Initially, the plan was to unveil the artifact to the public at the time of the article’s publication later this summer; however, after certain details surrounding the discovery inadvertently made their way online and began circulating on social media, the release date was pushed forward. As Professor van der Veen commented in a Facebook post, “there were some colleagues that sought to snatch the item from us and get it published under their name.” We thus await further information on the discovery later this year.

For more information on Zertal’s excavations, the identification of Joshua’s altar, and an interview with Dr. Scott Stripling about the discovery of this amulet, visit our sister website Armstrong Institute of Biblical Archaeology.

Congratulations to the team for a fantastic—and sure to be revolutionary—discovery!