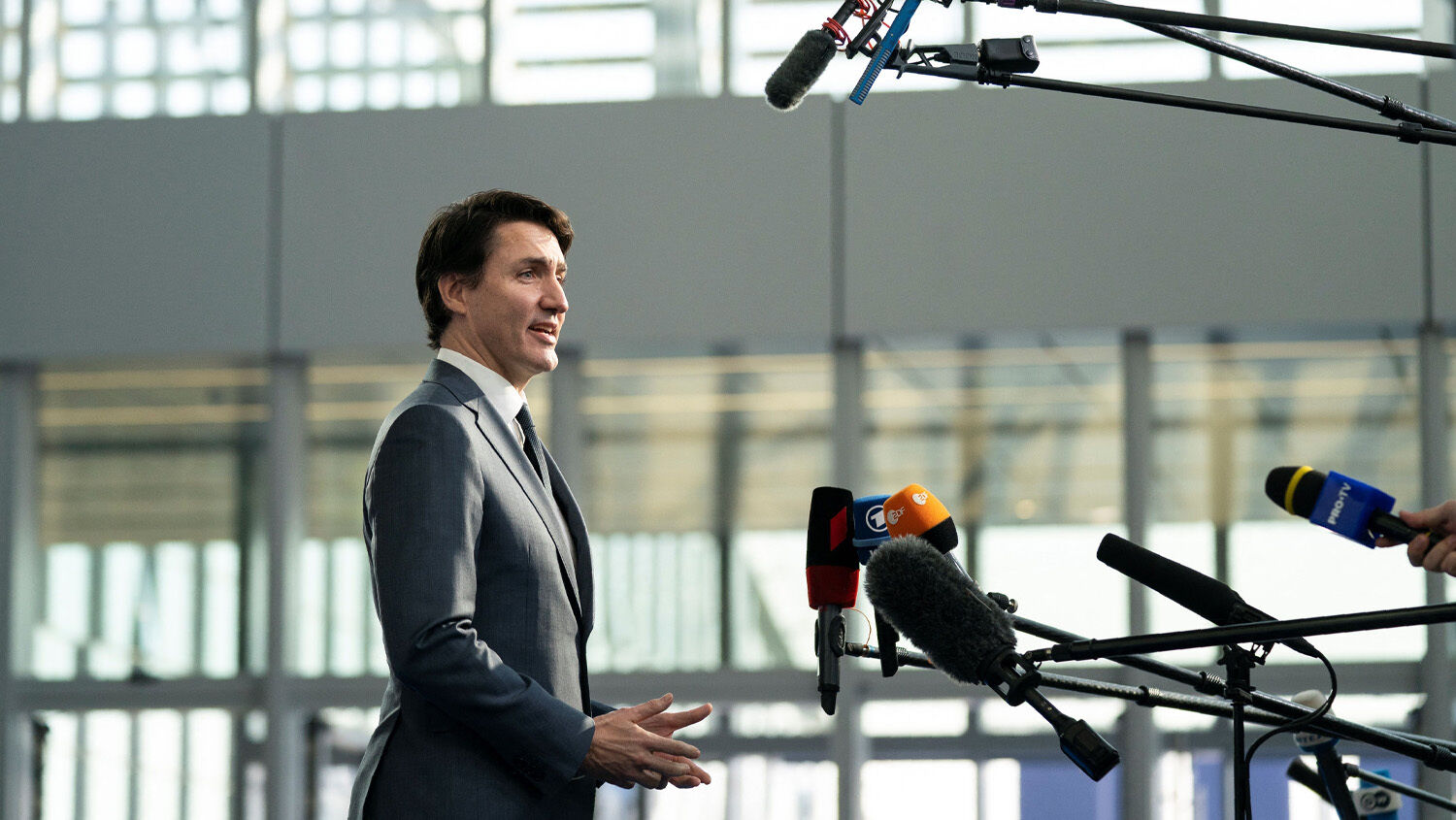 Canada’s Prime Minister Justin Trudeau addresses media representatives upon his arrival for a summit at NATO Headquarters in Brussels on March 24, 2022.
EVAN VUCCI/POOL/AFP via Getty Images

The radical left in Canada is being exposed, and the mainstream media is ignoring it.

When the Freedom Convoy protesters were in Ottawa, Canadian Prime Minister Justin Trudeau, the cabinet and the mainstream media told Canadians that the protesters were funded by Russians, dark money, Donald Trump supporters and foreigners. Canadians were told protesters committed violence, rapes, threats of rape, attempted arson and other crimes. The Freedom Convoy was marked as a national security threat and accused of terrorism and insurrection.

All of this has been proved false. All of the supposed evidence to support the invocation of the Emergencies Act and give Trudeau extraordinary wartime powers was a lie.

The prime minister unlawfully used an emergency statute that circumvented due process and judicial oversight to punish citizens with opposing political views. What is more, the measures used against the Freedom Convoy protesters violated charter rights and the very emergency proclamation the Trudeau government wrote.

Scandals are not new to Canadian politics. Spanning from John A. Macdonald in the Pacific Rail scandal in 1873 through every decade since, corruption has been commonplace among elected officials. But the Emergencies Act scandal is the biggest in Canadian history. It amounts to a coup against the rule of law. The mainstream media that enabled Trudeau to do so is now ignoring the evidence that exposes that agenda.

The centerpiece of the Emergencies Act was the measures taken against the crowdfunding websites and the freezing of Freedom Convoy supporters’ bank accounts based upon the narrative that they were funding illegal activities or were foreign-funded. During testimony to the House of Commons Public Safety Committee, GoFundMe and GiveSendGo noted they were never contacted by the federal government of Canada. GiveSendGo testified that 60 percent of donors were from Canada and 37 percent from the United States, with the average donation being $100. Its own analysis of donors yielded no terrorists or people of interest. This was the same for GoFundMe. Global News reported: “Juan Benitez, the president of fundraising website GoFundMe, said his company’s analysis of the more than $10 million donated through the platform found that 88 percent of donations and 86 percent of donors were from Canada.” The largest donation was $30,000, and it was from Canada.

Even the federal government’s own intelligence agencies have testified that the Freedom Convoy financing was perfectly legal and posed no threat. The Royal Canadian Mounted Police (rcmp) director of Financial Crime told the Finance Committee that there was no terrorist activity in the financing of the protesters. The deputy director of Canada’s national financial intelligence agency, fintrac, testified that aiding the Freedom Convoy was not supporting terrorism and that there were no illegal or suspicious activities regarding its funding. All the allegations by Trudeau and the “gang of five” were lies, and contradicted direct evidence.

At no point before February 14 when the Emergencies Act was invoked did a judge declare the protest illegal. The media and federal government labeled the protest an illegal occupation or a siege, but the court order against honking included language that the protest had the legal right to continue to protest. The Freedom Convoy was declared illegal only by the prime minister after he had the authority to do so because of the Emergencies Act. The emergency statute declares that the measures do not apply to a lawful assembly or dissent. If a judge ruled that the protest was legal, wouldn’t that make the application of the statute to the protesters illegal?

Now that Ottawa Police has come out and said there’s no evidence that the Feb. 6 residential building arson attempt was connected to the #FreedomConvoy2022 protest I have compiled every time a Liberal/NDP MP falsely smeared protestors as arsonists in the House of Commons #cdnpoli pic.twitter.com/rvpPTM7nGr

While the Senate was debating the Emergencies Act, the federal government inferred it had special intelligence that the Freedom Convoy was a national security threat but refused to release it to the Senate. Since that time there have been no charges of violence against the Freedom Convoy protesters. In fact, the exact opposite is true. Lawyer Keith Wilson, in an interview with independent journalist Viva Frei, revealed that at night Antifa was vandalizing the convoy’s trucks, slashing its tires, and cutting its air lines. All of the 911 calls and arrests made at that time were related to Antifa, but the mainstream media refused to report that.

The Ottawa Police arrested Randy Hillier, an Ontario member of Provincial Parliament who actively supported the Freedom Convoy and publicly opposed vaccine mandates and public health measures. Hillier has been banned from entering the Provincial Legislature and from social media for promoting “violence” and “medical misinformation.” He is being charged with obstructing a public officer, counseling mischief and obstructing property. He has since been released on bail. Charging and banning from public office a politician supporting a nonviolent protest and expressing a different point of view is unprecedented. Which politicians will be targeted next?

Trudeau and the cabinet have been caught in monstrous lies, but the media refuse to report the truth. In fact, the Minister of Heritage Pablo Rodriguez thanked the mainstream media for their coverage of the Freedom Convoy protests and promised more media subsidies. Yet the evidence paints a very condemning picture.

This is not a scandal of personal ethics or monetary gain; it is a scandal that undermines the very foundation of Canadian democracy. The events of the Freedom Convoy did not meet the thresholds needed to invoke the Emergencies Act; therefore, Trudeau used those powers in a lawless manner. For nine days in Canada there was no due process, right to protest, or freedom of speech. However, there appears to be no consequences for turning Canada into a dictatorship. In fact, Trudeau has consolidated power by entering into a confidence-and-supply agreement with the New Democratic Party, which will protect his government from any no-confidence vote until 2025 and gives him a de facto majority government. Trudeau will now pursue his agenda with more urgency.

The erosion of the rule of law has been a long and painful descent for Canada. The office of prime minister and the executive branch now hold extraordinary powers, far more than Parliament and the judiciary. Not only is the executive branch bureaucracy the largest employer in Canada, it also makes five times more laws than Parliament. In the Westminster system, the Henry viii clause allows Parliament to delegate law-making power to other entities in the federal government, like departments in the executive branch. Legal scholar Mark Mancini said this “runs rampant in Canada.” Many of the public health measures during the covid-19 pandemic have operated on the principle of the Henry viii clause. Mancini continued:

Important regulatory legislation is made primarily at the Cabinet and agency level, with five times more delegated legislation than primary legislation. At the federal level, there are 201 departments and agencies listed by the government of Canada, many of which have the power to issue delegated legislation. … Important issues of political significance affecting individual rights and interests are also decided by administrative agencies. Indeed, the Supreme Court of Canada has remarked that regulations are the “life blood” of the administrative state.

This is Canada’s “deep state”: a massive bureaucracy of unelected civil servants who have the power to make laws and regulations by decree. Trudeau used the coronavirus to expand these powers to the point where compliant-natured Canadians actually rebelled against that methodical power grab. The Emergencies Act has blatantly exposed Trudeau’s Communist intentions. Other Canadian politicians have had to resign from office and face punishment for taking bribes, having affairs and embezzling taxpayer money. What is the punishment for overthrowing civil liberties and the rule of law in Canada?

This Communist power grab was prophesied in the Bible to happen in the United States, Canada and the other English-speaking nations. Trumpet executive editor Stephen Flurry wrote in “Flirting With Dictatorship”: “Today, the radical left stands ready to blot out the political freedoms, cultural values and biblical virtues that made America and Canada great nations. God is going to have to intervene to save us from the abyss one last time. But why? Is He saving us just to ‘get back to the way things were,’ as many truckers and others have expressed it?” This government tyranny, and corruption in the media and our elected officials, is happening because of national sins against God’s law.

“Your only hope depends entirely on repenting of sin (Amos 7:8),” Mr. Flurry continued. “It depends on recognizing not only that our leaders are flawed, that our parties are flawed, and that our movements are flawed, but that, yes, you yourself are flawed. ‘God has made Canada one of those nations which cannot be conquered and cannot be destroyed,’ British politician Norman Angell said, ‘except by itself.’”

This is the biggest scandal in Canadian history, and it is a warning to you that the time to repent and turn to God is short. This coup against the rule of law has been enabled by the sins of the Canadian people. Bible prophecy indicates that the radical left will be exposed and that the tide is turning against these radical forces. As the Apostle Paul wrote in Romans 13: “And that, knowing the time, that now it is high time to awake out of sleep: for now is our salvation nearer than when we believed” (verse 11). Now is the time to turn away from sin and toward our only hope: the great God of the Bible. To learn more, please read “Flirting With Dictatorship” and Herbert W. Armstrong’s book The United States and Britain in Prophecy.