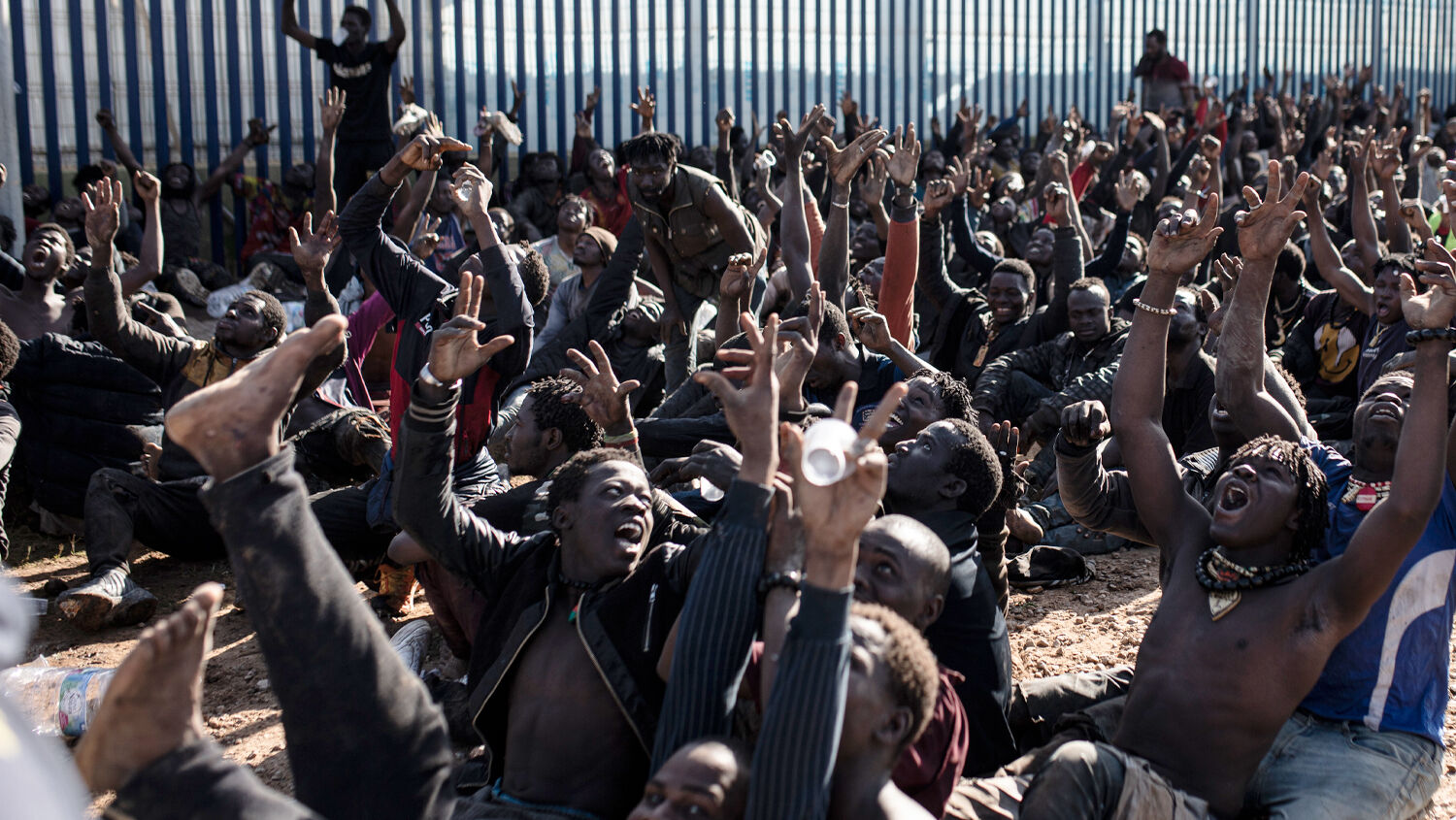 Some 500 migrants make the victory sign after jumping the fence on March 2 in Melilla, Spain.
ILIES AMAR/Europa Press via Getty Images

Over 2,000 migrants arrived at Spain’s enclave of Melilla on March 2, scaling border fences in an attempt to enter the European Union. This marks the second time within less than a year that a mass arrival of migrants has overwhelmed one of Spain’s North African territories. With Europe facing waves of refugees from both south and east, immigration has become a more political subject than ever.

Melilla is a Spanish enclave on the northern coast of Morocco. Reuters placed the number of migrants attempting to enter at around 2,500. Approximately 800 of them succeeded in entering the enclave. This compares to 1,092 migrants who entered during all of 2021, according to Spanish authorities.

The tidal wave of migrants that hit Melilla was the second-largest arrival in recent times. The largest occurred in May 2021 at Ceuta, another Spanish enclave in Morocco near the Strait of Gibraltar. Ceuta was taken by surprise when 8,000 migrants arrived and began scaling fences. In response, Spain sent in troops to restore calm and prevent the border from being overwhelmed.

Not an Isolated Event

Since then, migrant surges in Ceuta and Melilla have gone mostly unreported. In August 2021, guards stopped “a group of 350 sub-Saharan Africans” from entering Melilla, according to Agence France-Presse and the online resource InfoMigrants. One month earlier, however, a group of 200 migrants also attempted to enter; 119 were successful, reported InfoMigrants.

In September 2021, following the spread of false rumors about a relaxation of border controls, 300 migrants showed up in hopes of entering the enclave. When they were turned away, some pelted the border guards with stones.

The European Parliament adopted a resolution in June 2021 deploring “an unprecedented surge of crossings to the Spanish territory” of Ceuta and accused Morocco of encouraging the surge in migrants in order to exert political pressure on Spain. Spain had allowed the leader of the Polisario Front, a rebel group hostile to the Moroccan government, to enter the country and receive medical treatment.

Spain is more exposed than other European countries to mass arrivals of migrants because Melilla and Ceuta are the only land borders between Africa and Europe. However, increasing numbers of migrants is not only a problem for Spain—it is a problem shared by all of Europe.

The history of Melilla itself shows that European nations are willing to put aside their differences and work together when their interests are confronted by an external threat.

Spain began establishing protectorates in the country in the late 19th century. From the beginning, there were tensions between Christian Spaniards and Islamic Berber Arabs, known as the “Rif” after the name of the region where they lived. In March 1912, Spain formally established its protectorate of northern Morocco. Nine years later, however, tensions turned into war.

The Berber leader, Abd al-Krim, led guerrilla attacks against Spain’s lightly defended colonial positions, which were quickly overwhelmed. In mere weeks, Spain had lost most of its territories and found itself pushed back to one small port town: Melilla.

Four years of stalemate and bloodshed followed. Finally, Spain called on another colonial power to help end the conflict: France. Although some French generals were reluctant to help Spain, the French government feared that the uprising would spread and threaten French interests in Algeria. France agreed in 1925 to help Spain regain control of its colony.

A year later, the war was over and Spain had regained all its lost territories. The high casualties proved to be a wake-up call for Spain, resulting in a notable strengthening of the Spanish Army, as well as contributing to the rise of dictator Francisco Franco.

Today, Spain is not a colonizing power. However, it still faces mass arrivals of migrants from mainly Islamic nations. Spain may be exposed to the most dramatic of these, but it is far from the only European country struggling with this trend. Migration is also a divisive political topic in Italy, France, Germany and much of Eastern Europe.

External threats tend to unify Europe around a strong leader. This has happened throughout history. When Muslim forces from the Maghreb overran Spain in the early eighth century, Charles Martel gained fame for defeating them. His victory laid the groundwork for his grandson, Charlemagne, to unify Europe under Christianity. This was known as the Holy Roman Empire.

The migrant crisis currently divides many Europeans. But could it one day turn into a catalyst for unity?

A Trend to Watch

Jean Monnet, a founding member of the European Union, said, “Europe will be forged in crises and will be the sum of the solutions adopted for those crises.” As the Trumpet often points out, Bible prophecy indicates Europe will soon unite—the Holy Roman Empire will return. The debacles on Europe’s borders are preparing the Continent to accept stronger policies.

Europe’s response to the migration crisis will likely be one of the factors contributing to the accomplishment of this prophecy.

“A trend is unfolding in Europe that you should keep a close watch on,” wrote Trumpet editor in chief Gerald Flurry in 2018. “Europeans have been besieged by immigrants from the Middle East, growing Muslim populations within their midst, cityscapes filling with mosques and minarets, portions of their cities turning into Muslim enclaves that local police dare not enter, even Islamic terrorist attacks. And more and more Europeans are looking for solutions in their own history. Specifically, their religious history.”

This superpower has a history much more violent than the events currently happening on Europe’s borders. The Bible indicates that the cultural clash unfolding in Melilla and elsewhere throughout Europe is helping condition Europe for rule by a strongman.

To understand the outcome of this trend, request a free copy of A Strong German Leader Is Imminent.