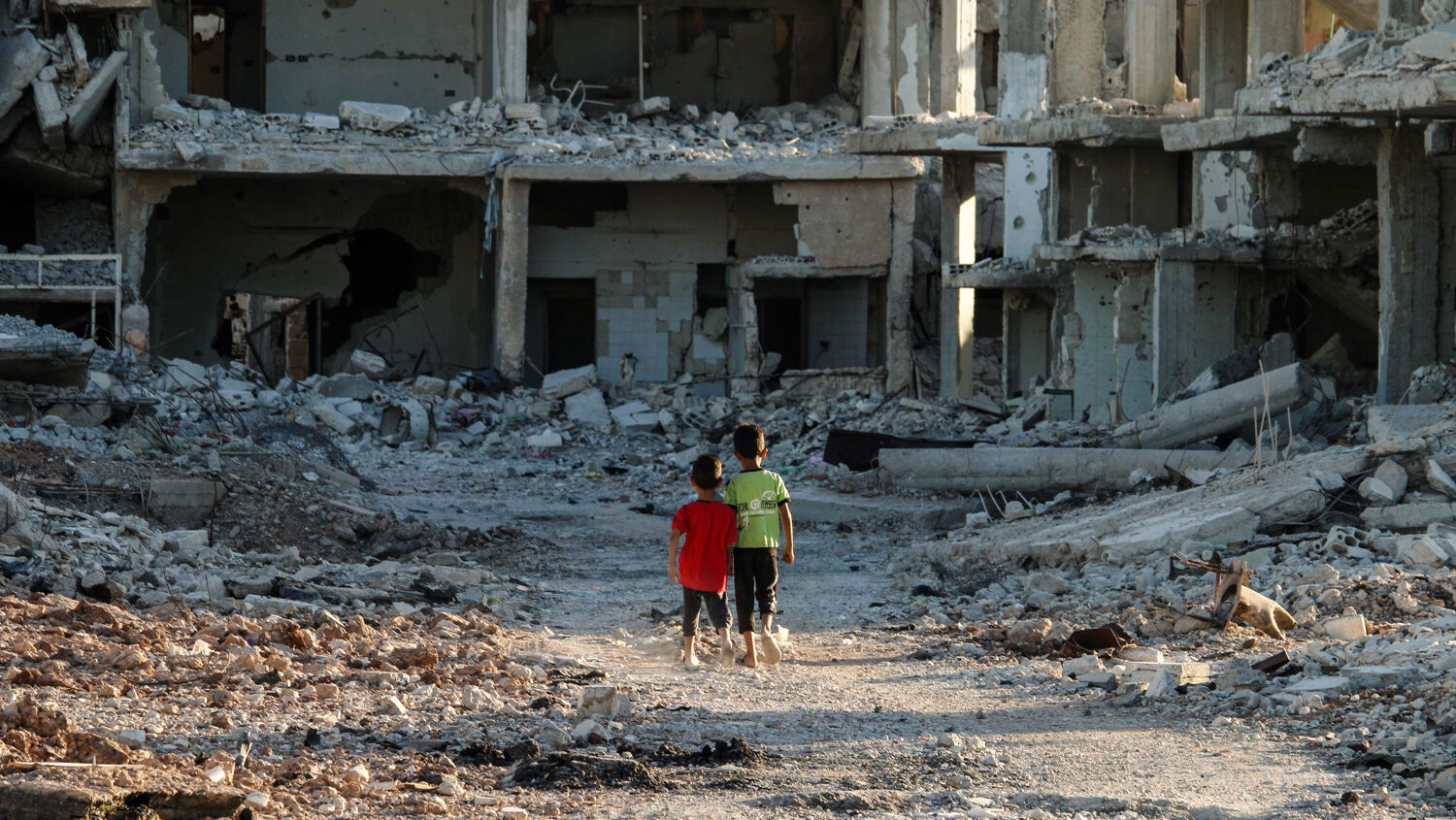 Two Syrian boys walk down a street amid destroyed buildings in a rebel-held area in the southern Syrian city of Daraa.
MOHAMAD ABAZEED/AFP via Getty Images

This month marked the 11-year anniversary of the start of the Syrian civil war. Since 2011, Syrian dictator Bashar Assad has bombed his own cities and used chemical weapons on civilians. Many hoped the war would oust Assad and bring peace, prosperity and security to Syrians. Yet he has managed to cling to power throughout the crisis. Despite the bloodbath, it looks like Assad is here to stay.

Due to Assad’s actions in the war, most of the moderate Arab world has been shunning him. But with the civil war starting to calm, moderate Arabs are ready to welcome Assad’s Syria back into their community.

Chief among these is the United Arab Emirates. “The U.A.E. and Syria have been reestablishing links for months now. In recent months the Syrian pavilion at the Dubai Expo has seen a steady flow of visitors eager to meet with top officials from Mr. Assad’s regime,” a January 27 Wall Street Journal article stated. This includes Abdulla bin Touq al-Marri, the U.A.E. economics minister, who met with Syrian counterpart Mohammed Samer al-Khalil to sign a trade agreement. Marri tweeted that the U.A.E. is “Syria’s most prominent trade partner.”

Meanwhile, the U.A.E. has become a popular place for Syrian companies to register offshore entities. They do this to work around Western sanctions. Cham Wings, a United States-sanctioned Syrian airline, started scheduling flights between Syria and the U.A.E. in November. In December, officials from the Central Bank of Syria visited Abu Dhabi to encourage trade.

The U.A.E. isn’t the only country reaching out to Assad. Egyptian and Algerian representatives have also been paying visits to the Syrian pavilion at the Dubai Expo. In December, Bahrain appointed its first ambassador to Syria in years. Jordan is also warming relations with Syria. But it is the United Arab Emirates that is spearheading normalization.

On March 19, Assad made a surprise visit to the U.A.E. He met with the country’s de facto ruler and crown prince of Abu Dhabi, Mohammed bin Zayed al-Nahyan. This was Assad’s first visit to an Arab state since the start of the civil war in 2011.

“Sheikh Mohammed stressed that Syria is a fundamental pillar of Arab security, and that the U.A.E. is keen to strengthen cooperation with it to achieve the aspirations of the brotherly Syrian people towards stability and development,” U.A.E. state media reported.

Syria is a major Iranian ally, but many of the countries making overtures to Syria are not on friendly terms with Iran. As an isolated regime, Syria would probably take whatever economic assistance is offered. But many suspect Assad’s dealings with the moderate Arabs mean he wants to leave the Iranian sphere.

“Even though Iran and its Shiite proxies … helped prevent the collapse of the regime in Damascus, Assad dislikes Iran and loathes its religious ideology,” Geopolitical Futures wrote on March 24. “He’s stuck in an alliance started by his late father, who sided with Iran in 1980 in its war against his rival [Saddam Hussein] in Iraq.”

In spite of the robust cultural ties between [Syria and Iran] … Alawites [the tribe Assad belongs to] view Iran with disdain, believing that Tehran tried to proselytize them into its faith. Economic ties between the two countries are also weak, deliberately blunted by Assad. The Syrian leader has avoided making substantial economic commitments to Iran, signing financial deals with Iranian companies but never implementing time. This arrangement is causing increased frustration in Tehran.

Syria is, at least on paper, a socialist dictatorship. Iran is an Islamic theocracy. The two became allies of convenience, but Damascus and Tehran have different worldviews. Iran sees itself as the unofficial “guardian and exporter” of Islamic revolution worldwide. Assad might be worried that Iran is planning to export such revolution to Syria.

There are indications of this. Iran has sponsored militias in Syria. These militias nominally support the Syrian government but are independent of it. Since the war’s start, these Iran-backed militias have grown in size and influence. In eastern Syria, Iran has constructed schools and distributed food—taking over local government responsibilities. Tehran has even tried to convert mosques from Sunni Islam to Shiite Islam, Iran’s state religion.

A look at Syria’s neighbors in Lebanon and Iraq shows what happens when a country lets Iran-backed militias become too powerful: They end up taking over the country. Assad knows this, which could explain his outreach to the moderate Arabs—many of whom are Iran’s enemies. This could also explain why the moderate Arabs are so eager to do business with Assad.

Assad’s surviving as president of Syria through more than 10 years of civil war is remarkable. Even more remarkable is his apparent willingness to split with one of his major sponsors.

But what may be most remarkable is a forecast that this split would occur—a forecast made nearly a decade ago.

In the September 2012 Trumpet issue, before the Syrian civil war turned into the quagmire it is today, Trumpet editor in chief Gerald Flurry wrote an article titled “How the Syrian Crisis Will End.” Here are a few select quotes from that article:

Nobody expected Assad to be the leader to cause that split. And how exactly this split will take place remains to be seen. But we are seeing Mr. Flurry’s words, written almost 10 years ago, realized.

This is because, as the fourth listed quote implies, his analysis is based on Bible prophecy.

Psalm 83 reads: “Keep not thou silence, O God: hold not thy peace, and be not still, O God. For, lo, thine enemies make a tumult: and they that hate thee have lifted up the head. They have taken crafty counsel against thy people, and consulted against thy hidden ones. They have said, Come, and let us cut them off from being a nation; that the name of Israel may be no more in remembrance. For they have consulted together with one consent: they are confederate against thee: The tabernacles of Edom, and the Ishmaelites; of Moab, and the Hagarenes; Gebal, and Ammon, and Amalek; the Philistines with the inhabitants of Tyre; Assur also is joined with them: they have holpen the children of Lot. Selah” (verses 1-8).

This is describing a coalition of nations assembled to attack the people of Israel. But neither biblical nor secular history record such an alliance with these particular peoples. The implication is that this is a prophecy for the future.

“You must know who the modern descendants of these people are in order to understand just how timely and relevant this prophecy is,” Mr. Flurry wrote. “‘Edom’ is Turkey; ‘the Ishmaelites’ are Saudi Arabia; ‘Moab’ and ‘Ammon’ both refer to Jordan; ‘Gebal’ is Lebanon. The Hagarenes anciently dwelt in the land known today as Syria. The only one listed here that lies outside the region is ‘Assur,’ which is Germany.”

In other words, this prophecy lists Syria among a group of more “moderate” Arab countries like Jordan and Saudi Arabia, as well as Europe. While Mr. Flurry listed the Saudis specifically as the Ishmaelites, other Gulf states (like the U.A.E. and Bahrain) also fall under that umbrella. Iran, which leads its own radical Islamist power bloc, is not part of the alliance.

The details of how this prophecy will be fulfilled are still unclear. But we’re seeing the seeds for this Syria-Iran split being sown—quite visibly. And this split was forecast all the way back in 2012.