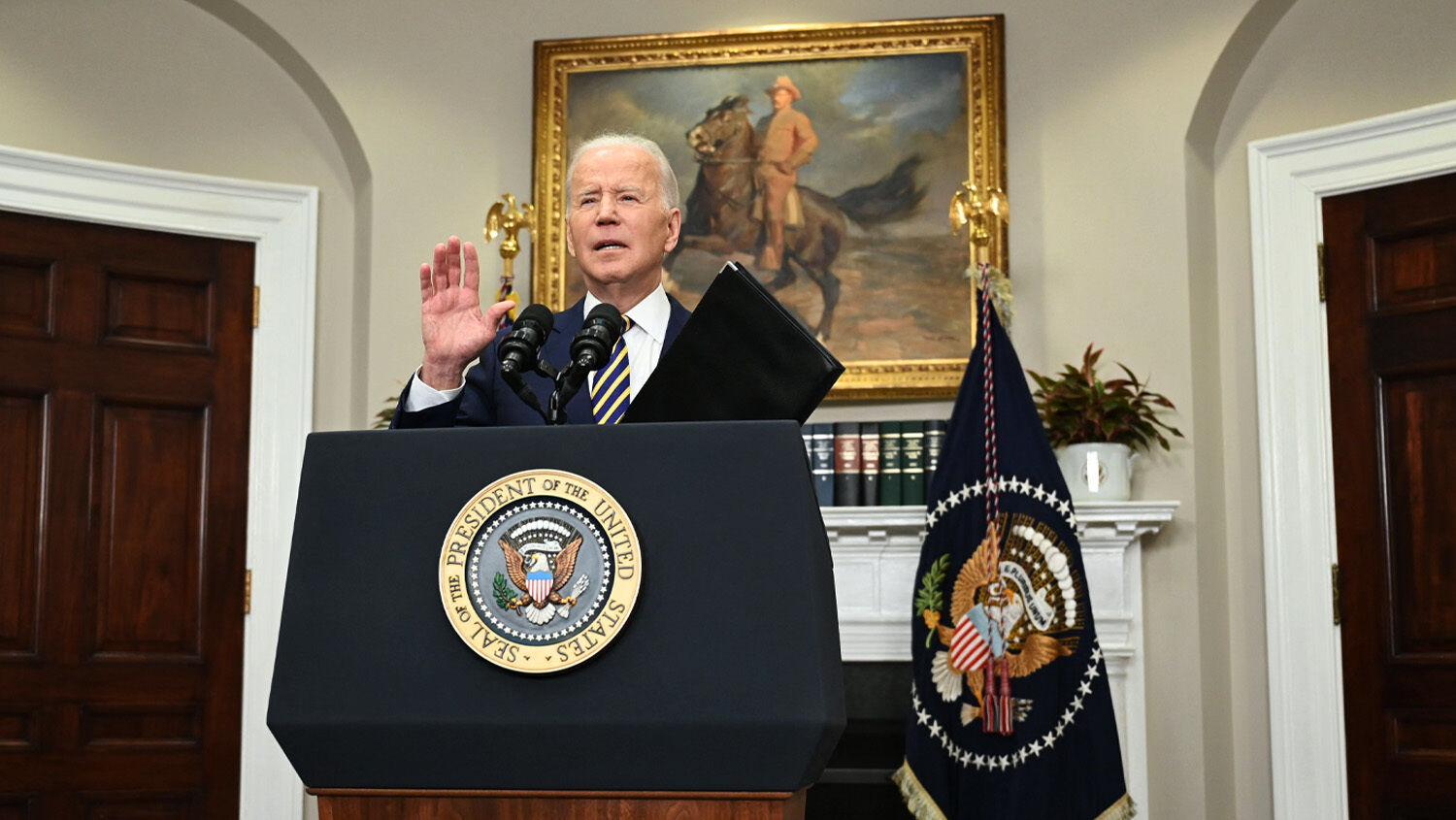 Joe Biden announces a ban on U.S. imports of Russian oil and gas, March 8, from the Roosevelt Room of the White House in Washington, D.C.
JIM WATSON/AFP via Getty Images

As Russian President Vladimir Putin prepares to escalate his military assault on Ukraine, Joe Biden has bowed to bipartisan pressure and banned oil imports from Russia. “I’m announcing the United States is targeting the main artery of Russia’s economy,” Biden said from the Roosevelt Room on March 8. “We’re banning all imports of Russian oil and gas and energy. Russian oil will no longer be acceptable at U.S. ports, and the American people will deal another powerful blow to Putin’s war machine.”

Since the U.S. imported 672,000 barrels per day of crude oil and petroleum products from Russia in 2021, this oil ban could push oil prices past $150 per barrel in the coming weeks. This means U.S. gasoline prices—which are already at historic highs—will continue to rise into the summer, forcing many Americans to make severe financial cutbacks.

Biden acknowledged this financial pain in his speech: “The decision today is not without cost here at home. Putin’s war is already hurting American families at the gas pump. Since Putin began his military buildup on Ukrainian borders, just since then, the price of the gas at the pump in America went up 75 cents, and with this action, it’s going to go up further. I’m going to do everything I can to minimize Putin’s price hike here at home.”

Yet in reality, he is not doing much to minimize Putin’s price hike. Biden is considering easing sanctions against Venezuela and Iran so that these two dictatorships can sell more oil. And he is considering a trip to Saudi Arabia to beg the sheikhs to pump more oil into international markets. But he is doing nothing to boost U.S. oil production.

“Biden, on day one of his presidency, made it his top priority to cripple American oil and gas producers,” American Warrior Oil ceo Cecil O’Brate told Fox Business on March 9. “His administration has axed progress on the Keystone pipeline, shut down leases on federal lands, encouraged woke Wall Street to divest from fossil fuels, and installed absolute antagonists in leadership at Federal Reserve, the [Environmental Protection Agency], and Department of Interior.”

American Warrior Oil still has 60 full-time employees but has not pumped any oil in a year due to trouble getting loans and finding additional employees. So O’Brate knows what he’s talking about when he says achieving American energy independence is going to take more than talk. It will require energy-friendly policies from the Biden administration.

The government needs to rescind regulations designed to curb oil production, expedite oil drilling permits, and encourage investment in the oil industry if it wants to drive down gas prices. Instead, it has banned drilling on federal land, halted onshore lease sales, and wrapped onshore leases in so much red tape that it takes four months to get one. It is almost as if Biden wants to keep the domestic oil and gas industry weak for some reason.

Biden has not explicitly said this reason is to drive more American companies toward green energy, but others in his administration have been more candid. Only four days after Putin invaded Ukraine, Energy Secretary Jennifer Granholm emphasized that America must transition away from fossil fuels. She announced a commitment from over 90 companies and organizations to reduce their carbon emissions by burning less oil and gas fuels to accomplish this goal.

The director of Biden’s National Economic Council then echoed Granholm’s comments on March 8, saying, “The only viable path to energy independence for the American economy is to reduce the energy intensity of our economy overall. And ultimately to reduce it to zero and get ourselves to a position where we’re no longer reliant on fossil fuels. That’s a long-term project … and the economic pain should only reinforce our efforts to try to move there more quickly.”

Biden may go cap in hand to Iran, Saudi Arabia and Venezuela for oil as a temporary fix to high gas prices before the midterm elections, but he isn’t about to make it easier for U.S. companies to drill because that might derail his green agenda. He would rather help Persian mullahs, Arab sheikhs, and Venezuelan Communists than American oil workers.

This insane energy policy the Biden administration is pursuing amid Russia’s invasion of Ukraine was prophesied.

The late Herbert W. Armstrong wrote that America’s oil and gas reserves were blessings from God that most people no longer appreciate the way they should. In his landmark book The United States and Britain in Prophecy, he explained that the Anglo-Saxon people are descended from the lost tribes of ancient Israel. He cited a prophecy Moses made just before his death about the mineral wealth these lost tribes would possess in the end time.

The “chief things of the ancient mountains” and “the precious things of the lasting hills” refer to mineral wealth that must be dug out of the ground. Today, the United States is still the world’s top oil- and natural gas-producing nation, but it is increasingly looking to tyrannical regimes like Iran, Saudi Arabia and Venezuela for its energy needs because it wants to scale back its oil production. This desire to sabotage U.S. energy dominance reveals a profoundly ungrateful attitude that will literally cost Americans as other nations step up to fill the power vacuum America leaves behind.