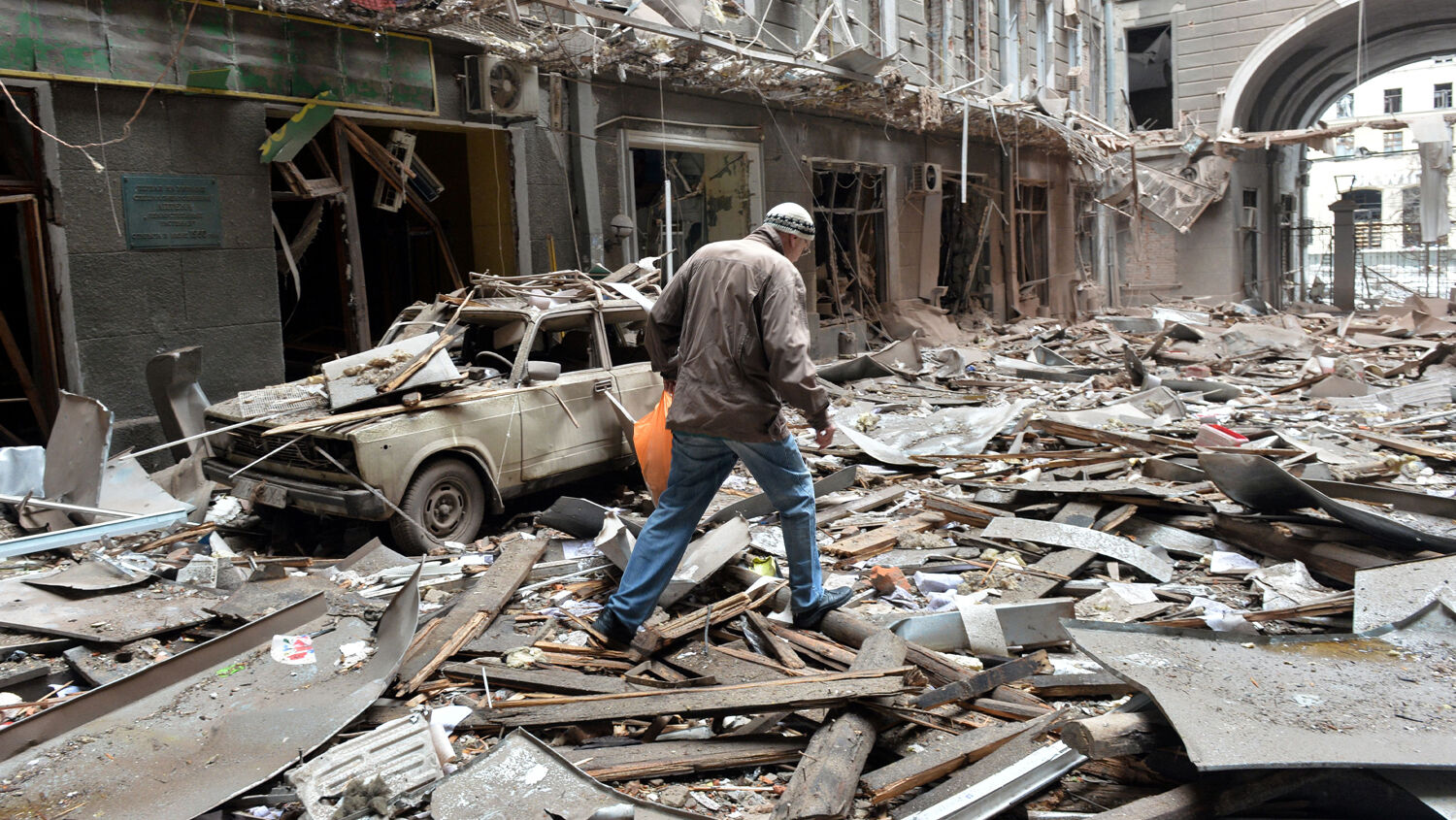 A man walks through debris after a shelling in Ukraine’s second-biggest city of Kharkiv on March 3.
SERGEY BOBOK/AFP via Getty Images

Germany and Israel upgrade their relations.

On March 2, while Ukrainian cities were being bombed, German Chancellor Olaf Scholz visited Jerusalem, meeting with Israeli Prime Minister Naftali Bennett. The two leaders “agreed on the creation of a new strategic cooperation.” Bennett called it “a significant upgrade in our relations.” He warned that the currently negotiated nuclear agreement with Iran could allow the terrorist-sponsoring nation “to install centrifuges on a broad scale within a few years. This possibility is unacceptable to us.”

After discussing Ukraine, Bennett said: “Mr. Chancellor, we are also charged with the responsibility of making sure that Iran will have neither nuclear weapons nor the possibility of attaining them, not on our watch, not ever.” Israel is greatly concerned about Iran—but the West promises security.

Scholz countered Israel’s concerns by saying that a new nuclear agreement with Iran “cannot be postponed any longer.” In other words: No matter how bad the deal is, we have to sign it. But he promised, “Germany will always stand fast by Israel’s side.” The new agreement between Germany and Israel comes in the form of a biannual dialogue on security and diplomatic matters.

The United States is pushing forward with the Iran deal with similar urgency. Yet three top U.S. diplomats left the negotiating table because Iran is getting an even better deal than their moral restraint could justify. Nonetheless, the U.S.’s chief negotiator pushes ahead.

Crisis after crisis is exploding on the world scene. But this is just the beginning.

Iran is one of the world’s largest oil producers. It has little interest in nuclear energy. Iran seeks to get nuclear bombs to destroy Israel. Its leaders have sworn repeatedly to “wipe Israel off the map.” These were the exact words of former Iranian President Mahmoud Ahmadinejad in 2005.

While Israel knows of this incredible danger, Western powers have promised to protect Israel—the same promise they made to Ukraine.

In the 1994 Budapest Memorandum, the U.S., Russia and Britain committed “to respect the independence and sovereignty and the existing borders of Ukraine” and “to refrain from the threat or use of force” against the country. The Brookings Institution explained: “Those assurances played a key role in persuading the Ukrainian government in Kyiv to give up what amounted to the world’s third-largest nuclear arsenal, consisting of some 1,900 strategic nuclear warheads.”

Russia obviously broke this agreement. In February, President Vladimir Putin ordered his forces to “perform peacekeeping functions” in eastern Ukraine. What followed was an all-out invasion. Over the last decade Germany has played a key role in the negotiations but allowed the crisis to escalate.

Israel should learn from this history as a similar crisis is developing that threatens its own security. Daniel 11:40 reveals that Iran will push at a German-led empire. After defeating Iran, this European power will “enter also into the glorious land,” or Jerusalem (verse 41). Trumpet editor in chief Gerald Flurry explains in Jerusalem in Prophecy: “The word enter in no way indicates the use of force. The Germans will undoubtedly be invited in as a peacekeeping force.”

Germany has been at the helm of negotiations over Ukraine with Russia; this hasn’t prevented an invasion. In fact, the negotiations may have made the invasion possible. Germany has betrayed Ukraine. (For more information about German betrayals, read “Why Germany Just Betrayed America.”)

Kyiv, formerly Russia’s religious center, is Putin’s top priority to conquer. For the Vatican and Europe, Jerusalem is even more important. “The Vatican and Germany are the heart of the Holy Roman Empire,” Mr. Flurry wrote. “They have conquered Jerusalem several times before. And they are destined to do so one last time!” (Read The Holy Roman Empire in Prophecy for more information.)

Could it be that a deal has been made to allow the German-led European empire to peacefully seize Jerusalem?

I encourage you to order a free copy of Jerusalem in Prophecy to understand where the current negotiations are leading and where the next big crisis will occur. This booklet also reveals profoundly good news for Israel, Germany, Russia and the whole world.