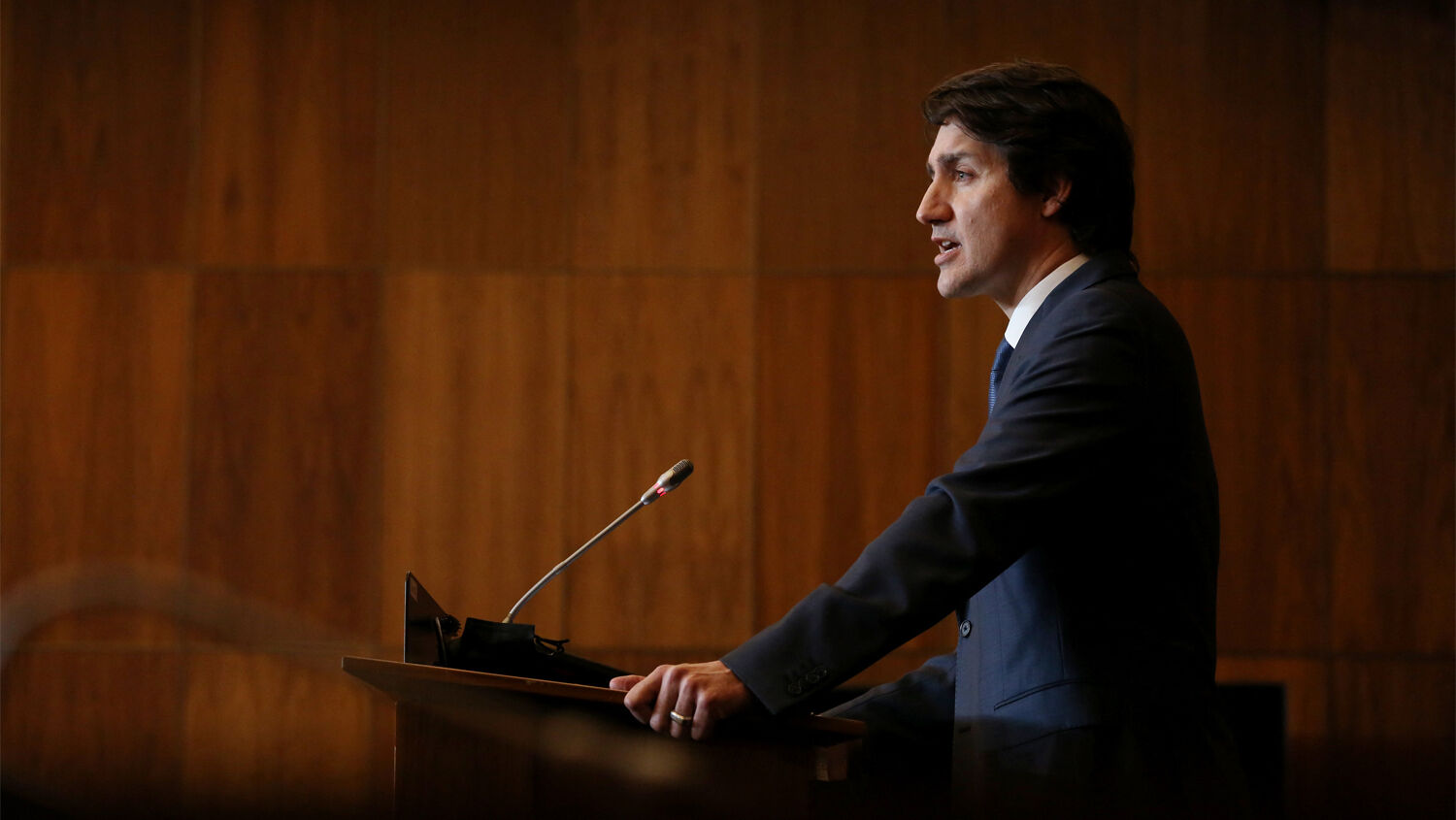 The attack on Canadian freedom continues.

Bank accounts are being frozen. Travel is being restricted. The media is being censored. These extraordinary measures are being done to defend democracy and protect freedom. These actions have been taken by Canadian Prime Minister Justin Trudeau’s government against Russia for its invasion of Ukraine. Yet these are the same actions taken by Trudeau against Canadians peacefully protesting for their freedoms.

While democracy dies in Canada, our leaders are willing to spend billions of dollars and wreck our economy for the democracy of another nation.

Trudeau even said democracies are slipping into favoring authoritarian leaders and policies. Was he inadvertently speaking about himself?

Trudeau: “we see a bit of a slippage in our democracies. Countries turning towards slightly more authoritarian leaders. Countries allowing increasing misinformation and disinformation to be shared on social media”https://t.co/cTm6cKHpsA pic.twitter.com/N98bF9qTFS

This is a coup, a conspiracy, an infiltration being committed against the people of Canada. But this was prophesied in the Bible. And even though the Emergencies Act was rescinded, some of the extraordinary measures used under emergency powers are still in effect.

At the height of the power grab, over 200 bank accounts were frozen, worth over $8 million. While some of these accounts have been unfrozen, some Canadians still cannot access their money. ctv News reported that some banks accounts will remain frozen due to other related legal matters and court orders, writing: “Financial intelligence expert Kim Manchester says that banks will likely keep tracking those individuals flagged by the rcmp [Royal Canadian Mounted Police] and their names could end up on private-sector third-party databases that banks rely on to mitigate anti-money laundering and terrorist financing. Banks and other financial institutions were also directed to look into whether any clients seemed to be supporting the protests, and those monitoring actions could well continue, he said.”

This has since been confirmed by Blacklock’s Reporter: “Freedom Convoy sympathizers whose accounts were frozen by cabinet order will have their files marked for life, the Canadian Bankers Association said yesterday. Bankers also disclosed they froze accounts of individuals who never appeared on an rcmp blacklist of 257 names.” Banks were encouraged to create their own blacklists of clients they suspected of supporting the Freedom Convoy.

The Freedom Convoy’s main organizer, Tamara Lich, was granted bail for $25,000 after being in jail for 18 days. Lich was originally denied bail by Justice Julie Bourgeois due to the continuing threat she posed to democracy. Bourgeois was a 2011 Liberal candidate and was appointed to the federal court by Trudeau in 2015. It is interesting that she was assigned the Lich bail hearing. It was also revealed that Lich was in ankle shackles while imprisoned.

The terms of Lich’s bail are outrageous considering she is only being held for “mischief.” Some of the terms of Lich’s bail are essentially a gag order and social confinement: “Lich is also prohibited from accessing or using social media, or having anyone use it on her behalf,” reported ctv News. “She also cannot attend or engage in any future protests of covid-19 mandates. Lich’s surety must have easy and regular access to her electronic devices to ensure this. She is also prohibited from being in contact with several other organizers or leaders of the convoy movement.” Trudeau is effectively silencing anyone who disagrees with his policies.

The events in Ottawa exposed how the legacy media in Canada are completely subservient to Trudeau’s government due to government funding and bailouts. If not for independent media like Rebel News and people posting information on social media, the truth would never have been known. Blacklock’s Reporter wrote: “Heritage Minister Pablo Rodriguez is promising more media subsidies after thanking reporters for their Freedom Convoy coverage. ‘Look at the role that the journalists played,’ said Rodriguez: ‘I think there are even more things we should be able to do.’”

It appears the Internet is the next area of Canadian life to come under federal government oversight. The Online Stream Act, Bill C-11, is currently being debated in Parliament. This would give the Canadian Radio-Television and Telecommunication Commission (crtc), an unelected bureaucratic committee, sweeping powers to regulate content on the Internet. This would include ensuring programming has certain Canadian content and contains certain values and political viewpoints, and censoring or leveling massive fines or jail time for violations.

As an example of the power the crtc has, Russia Today had its broadcasting license revoked without following the normal procedure. The federal government said Russia Today was promoting misinformation and disinformation, and so it was censored without due process. The crtc has the power to silence any programming on radio and television in Canada, and Bill C-11 would give the crtc similar powers over the Internet. This is a dangerous piece of legislation.

Even politicians like Randy Hillier, who has opposed government vaccine measures and supported the truckers, has been censored from Twitter and been barred from entering Ontario’s provincial legislature. Hillier has not broken any laws or posed a threat to anyone; he simply disagreed with Trudeau and Ontario Premier Doug Ford.

Trudeau’s “public safety” minister — who falsely accused the truckers of being rapists — celebrates the silencing of a political opponent, in this case another elected official. Trudeau is still acting like it’s martial law. Undoubtedly Twitter acted under pressure from Trudeau. https://t.co/c47nngVJBl

Another bill undermining Canadian freedom is Senate Bill S-233. This bill aims to give every Canadian over the age of 17 a guaranteed basic income. This income amount would be made to cover living expenses and commuting and would be in addition to other welfare programs. Not only would this increase massive deficit spending and worsen Canada’s national debt crisis, it would also exacerbate people’s dependence on the government to survive.

Government pandemic handouts, called the Canadian Emergency Response Benefit, have created an artificial job shortage as people choose to live off government money instead of working. Many small businesses are closing or are struggling due to the inability to find employees. The latest statistics available show 912,580 job vacancies in Canada and 1.3 million unemployed. A universal basic income would further weaken the economy and make people dependent on the government. That is what the Communist government wants. As inflation increases and people need help to afford housing, food and fuel, it opens the door for further government intervention in Canadian society.

Even the crushing fuel inflation Canadians are suffering is designed to force acceptance of government green energy initiatives and deconstruct people’s independence. Since 2015, Trudeau has canceled $176.2 billion worth of projects and investments into Canada’s oil and gas industry.

This is why we can’t have nice things… pic.twitter.com/X40TgXYYeQ

As the government targets economic control and Internet censorship, Trudeau’s government is also rewriting Canadian history. This process has been going on for years in Canada by Marxists in education and government, but the Trudeau government has accelerated this attack. “About a 10th of federal historical designations approved since 1919 will be purged or rewritten, including numerous tributes to John A. Macdonald, records show,” wrote Blacklock’s Reporter. “Revisionism follows a cabinet order to delete history deemed to celebrate colonialism: ‘Nothing can be immune from review.’”

This cabinet order was secretly executed by Canada’s chief archivist, Leslie Weir, in October 2021. Thousands of official government archives of Canadian history were removed and flagged if they “lacked indigenous perspectives” or it “ignores or dismisses the impact of colonialism.” This is a direct attack on Canadian culture and government institutions, and it is attempting to shame Canadians into accepting woke progressivism at the expense of their freedoms.

How is Trudeau able to drive a Communist agenda that is undermining Canadian rights and the rule of law?

When Pierre Trudeau repatriated the Constitution in 1982, Canada became a nation of constitutional supremacy, meaning a written law governs all functions of government. However, Canada’s Westminster system of government still operates under the principle of parliamentary supremacy, meaning the elected representatives of the people have the power to make any laws in their jurisdiction. The Charter of Rights and Freedoms, included in Canada’s Constitution, provides limitations on what laws can be made.

In practical terms, the governing party has found a loophole around the Constitution. Not only does the Charter Section 1 clause allow government abuse of power, but the weak separation of executive and legislative wings of government also allows for an abuse of power. The executive and legislative branches are merged into one in the cabinet. Therefore, the same lawmakers are forming the laws that the executive branch will later execute. It has been common practice for lawmakers to write laws that grant the executive branch large discretion in the legal boundaries of those laws, making any constitutional limits vague.

The executive branch in Canada is by far the largest. It consists of the cabinet, prime minister’s office, all the government agencies, civil service, central bank, medical bureaucracy, rcmp, intelligence agencies, etc. This massive executive branch bureaucracy is Canada’s “deep state.” The July 2018 Trumpet magazine outlines the dangers and history of the deep state in the United States. The Communists in Canada have followed the same pattern.

From Pierre Trudeau to Justin Trudeau, with the exception of Stephen Harper, there has been 40 years of consistent radical-left agenda of the governing party and Canada’s executive deep state. Trudeau is now speeding this agenda along out of the public spotlight.

Bible prophecy indicates part of the prophesied decline of the modern nations of Israel will involve a Communist attack from the inside. Trumpet editor in chief Gerald Flurry writes in Great Again: “[Communists] aim to destroy the system, because they can’t build another one until that happens. … We are staring it in the face today.” Trudeau invoking the Emergencies Act should be a wake-up call for all of us. Mr. Flurry continues: “We must see reality: Something deadly dangerous has seized the country—far more than what people realize. There is a spiritual dimension to what is happening, and you cannot understand these events unless you recognize this.”

There is a spiritual dimension to the events happening in Canada. The ultimate architect to this Communist attack on Canada is Satan the devil. This evil spirit being was cast down to this Earth (Revelation 12:9) and is the god of this world (2 Corinthians 4:4). This is the most important truth you need to know about what is happening right now, as Mr. Flurry writes: “The radical left is not our big problem. Ultimately, this isn’t about a man or an administration; it’s about an evil spirit being who is working to destroy this nation—and about why God is allowing it to happen!” This truth can revolutionize your life. But the only place you can find this truth is at the Trumpet.

To know more about this spiritual dimension and why it is happening, please read our free literature Great Again and Herbert W. Armstrong’s The United States and Britain in Prophecy.