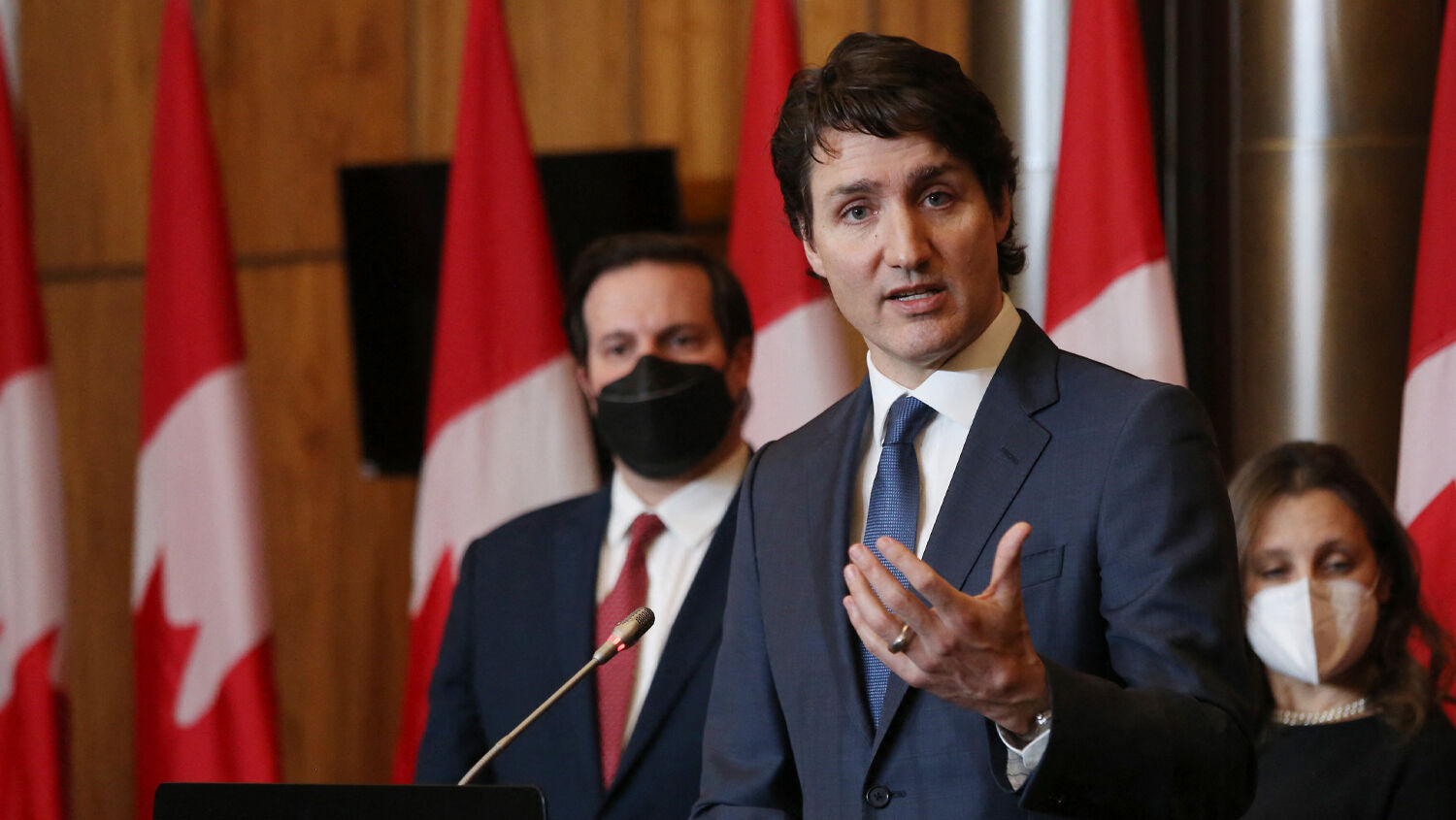 The real state of Canada’s economy

On Monday, February 21, democracy in Canada died by democratic vote. The Emergencies Act was affirmed in a vote of 185 to 151. It was split along party lines, with the ruling Liberal Party and the New Democratic Party supporting the act, and the opposition Conservatives and Bloc de Quebecois voting against the measure. The vote gave Prime Minister Justin Trudeau’s government extraordinary emergency powers for at least 30 more days. The Canadian Senate then had to vote on invoking the act.

During the debate the federal government insisted a threat to Canadian democracy was present and even implied they were looking at keeping the powers for months in case other organized protests began. Over 200 bank accounts had been frozen under the emergency orders amounting to around $8 million in assets. Protesters were imprisoned and more investigations seemed imminent.

Yet only 48 hours after the vote, on February 23, the prime minister announced they were revoking the emergency powers. What was behind this sudden change of direction?

Sen. David Wells commented that briefly before the February 23 press conference, the Liberal caucus began calling senators to see how the vote may play out in the Senate. Around 45 senators indicated they would vote against Trudeau’s action.

But there is another reason that may have been far more compelling to the Trudeau government. The main feature of the emergency orders was allowing banks to freeze accounts of Freedom Convoy protesters and supporters at their own discretion without a court order. Crowdfunding sites and their payment systems were also required to register with a government financial intelligence agency, fintrac. One day before the emergency powers were revoked, the Royal Canadian Mounted Police and the Canadian government indicated they had begun to unfreeze bank accounts. If this was a movement that threatens the sovereignty of Canada, why backtrack so suddenly?

Shortly after the February 17 announcement that people’s bank accounts were being frozen for supporting the Freedom Convoy, a bank run began. Canada’s major banks all had a mysterious outage peaking at 11 p.m. that night. The banks affected were the Royal Bank of Canada, the Bank of Montreal, Scotiabank, and the Canadian Imperial Bank of Commerce. No explanation has been given, but such outages occur with software updates or suspending services to interfere with people withdrawing money from the banks. If you thought your bank account was going to be frozen at any moment, wouldn’t you withdraw your money?

Canadian economic blog Armstrong Economics wrote: “Based upon reliable sources, Trudeau has been forced to abandon his Emergency Act as a staggering amount of money has fled Canadian banks. Canadians have moved accounts to the United States by the tens of thousands following Trudeau’s freezing bank accounts without a court order, which has even included credit cards.” The destabilizing effect of a bank run may have forced Trudeau to make a dramatic about-face.

“The sheer amount of money withdrawals from Canadian banks was massive,” Armstrong Economics wrote. “There appears to have been a 500 percent increase just in the previous 24 hours.” Canadian banks already have strict rules restricting cash withdrawals. Most atms have a limit of $1,000 and around $2,000 from a teller. Any larger withdrawals require giving the bank one week’s notice.

Armstrong Economics expects bank instability to surface in the next few weeks: “Trudeau has driven a stake through the heart of the Canadian economy and that means that international capital will be skeptical about trusting Canada as long a Trudeau is in power.” Other sources support the fact that insiders were warning of a financial crisis. The government and media are not reporting on the amount of capital that left Canadian banks, but it is possible many large institutions and investors fled Canada to protect their assets from government freezes.

Even before this instability was introduced into the Canadian economy, the nation was already teetering on the edge of fiscal oblivion. Due to government overreach and corruption, the Canadian people are already paying the price, literally.

The most immediate crisis is inflation. In December 2021, inflation rates broke a 30-year record by rising to 4.8 percent. January 2022 saw that record broken, with inflation rising to 5.1 percent, and there are no signs of it stopping anytime soon. The average family of four in Canada will pay at least $966 more a year in groceries. An Angus Reid poll showed 80 percent of Canadians are changing their food purchases in order to afford groceries. Thirty-five percent are buying less meat and 21 percent are eating less fresh fruits and vegetables.

This was before the Ukraine war began. Since Russia supplies most of the world’s low-cost fertilizer, farmer expenses are about to increase, and that will be passed along to the consumer. Ukraine supplies a sizable amount of the world’s wheat and corn. If those are interrupted, prices could jump 20 percent to 30 percent according to Rabobank.

Fuel prices are also skyrocketing across Canada. In December 2021, fuel prices across Canada hit record highs. In Ontario, gas reached $1.50 per liter (us$5.67 per gallon) for the first time in history. At the time of writing, gas currently sits at $1.66 per liter and is expected to jump 10 cents in the next few days. By the end of March, some experts are warning gas will rise to $2 per liter (us$7.56 per gallon). On top of all this, the federal government’s next carbon tax increase begins on April 1. That will increase gas prices by an average of 11 cents. This carbon tax increase also impacts natural gas prices to heat homes. The average family will pay $943 in carbon taxes for natural gas. This is crushing people’s ability to operate in society.

Diesel prices are set to jump by 30 cents over the next few days according to experts. “Canadians for Affordable Energy President Dan McTeague noted that ‘all modes of bringing products to market are usually driven by diesel’ and for that reason its cost will have a more direct impact on the price of consumer goods over the coming weeks and months,” reported CP24. “In fact, McTeague predicted that the rising cost of fuel will likely drive inflation to levels we have ‘probably not seen in our lifetime.’” This hike in diesel fuel may add another 30 percent increase in the cost of food and other goods.

Many Canadians may soon find themselves facing very difficult choices: Do I drive to work, feed my family, or heat my home?

This inflation is happening at the same time the federal and provincial governments are increasing taxes. In 2020, the average Canadian family allocated around 36 percent of its budget to taxes according to the Fraser Institute’s most recent Canadian Consumer Tax Index report. Canadian Pension Plan payments will increase by $333 a year, and Employment Insurance will increase by $63 a year. Income tax will increase across the board as well: Incomes above $60,000 a year will pay between $100 to $300 more per year. Despite inflation over 5 percent and taxes increasing, wages are set to increase by only 2.7 percent in 2022. Fifty-three percent of Canadians cannot keep up with the cost of living.

Canadian real estate is at a record high. In December 2021, housing prices jumped 26.6 percent. The average home in Canada costs over $700,000. Mortgage rates are at a record low and there is an acute housing shortage, which is driving prices sky-high. With other financial pressures eating up income, most young Canadians cannot afford to buy homes.

What is driving these crushing economic forces in Canada? Printing money and massive deficit spending. Since February 2020, the Bank of Canada has printed $370 billion in new Canadian dollars. That is a 300 percent increase in money printing since the pandemic began. This massive injection of money has driven costs for goods upward: More cash with less goods means prices increase.

This money printing directly mirrors Trudeau’s deficit spending, meaning the government is spending more than it receives in revenue from taxes and trade. “Politicians’ deficit spending directly influences the government’s inflation tax,” wrote Franco Terrazzano from the Canadian Taxpayers Federation. “The 2021 federal budget projects a deficit of $155 billion, or $3 billion per week. By a remarkable coincidence, a few days after the budget was released, the Bank of Canada announced it would purchase $3 billion of government Canada bonds every week. That sure seems like using the printing press to fund Ottawa’s deficits spending.”

Canada’s debt has surpassed $1 trillion for the first time. The Toronto Star wrote: “Canada’s total non-financial debt-to-[gross domestic product] is considerably worse than the global average; at a massive 343 percent it is one of the highest in the world.” The average Canadian owes $57,500 in federal and provincial debt. On top of that, Canadian consumer debt, such as mortgages and credit cards, is now over $2 trillion.

There are no signs of the deficit spending slowing down. The Trudeau government has already promised another $179 billion in program spending and allocated $140 billion over the next five years in stimulus. New documents show that Trudeau was warned the “build back better” pledge would result in high inflation and economic uncertainty. Canada is a nation diving head first into the death spiral of national debt. With inflation rising, supply shortages abounding, and more and more businesses closing from the pandemic, Canada’s economy is already a walking zombie.

In one way, the impending financial doom may have forced Trudeau to abandon his tyrannical overreach. But the radical-left Communists in control of Canada want to destroy its economy. This is exactly what the Bible foretold would happen.

The late Herbert W. Armstrong warned for years that one of the goals of the Communist infiltration was to destroy the economy. “Communism, of course, is many things,” he wrote in the February 1962 Plain Truth. “It is a doctrine …. It is a revolutionary program. It is relentless class war. It is a radical philosophy of history. It is a radical philosophy of society. It is a social system. It is an economic system. It is a political strategy. It is a world conspiracy.” In order to fundamentally transform the capitalist West, the Communists must first wreck the economy.

Our booklet He Was Right says: “Herbert Armstrong warned that Communist economics would sap America’s strength and weaken its economic power.” This same Communist attack has happened inside Canada. Deuteronomy 28:44 prophesied that our nations would lose our economic leadership of the world because of national debt.

The Communist attack and our soaring national debt are quickly collapsing our nations’ economies. Trudeau’s tyrannical power grab may have hastened the day of that crisis. The Bible prophesies this incoming crisis not only causes suffering internally but helps cause a new European superpower to come to supremacy. To learn more about these imminent prophecies, please read our booklet He Was Right.