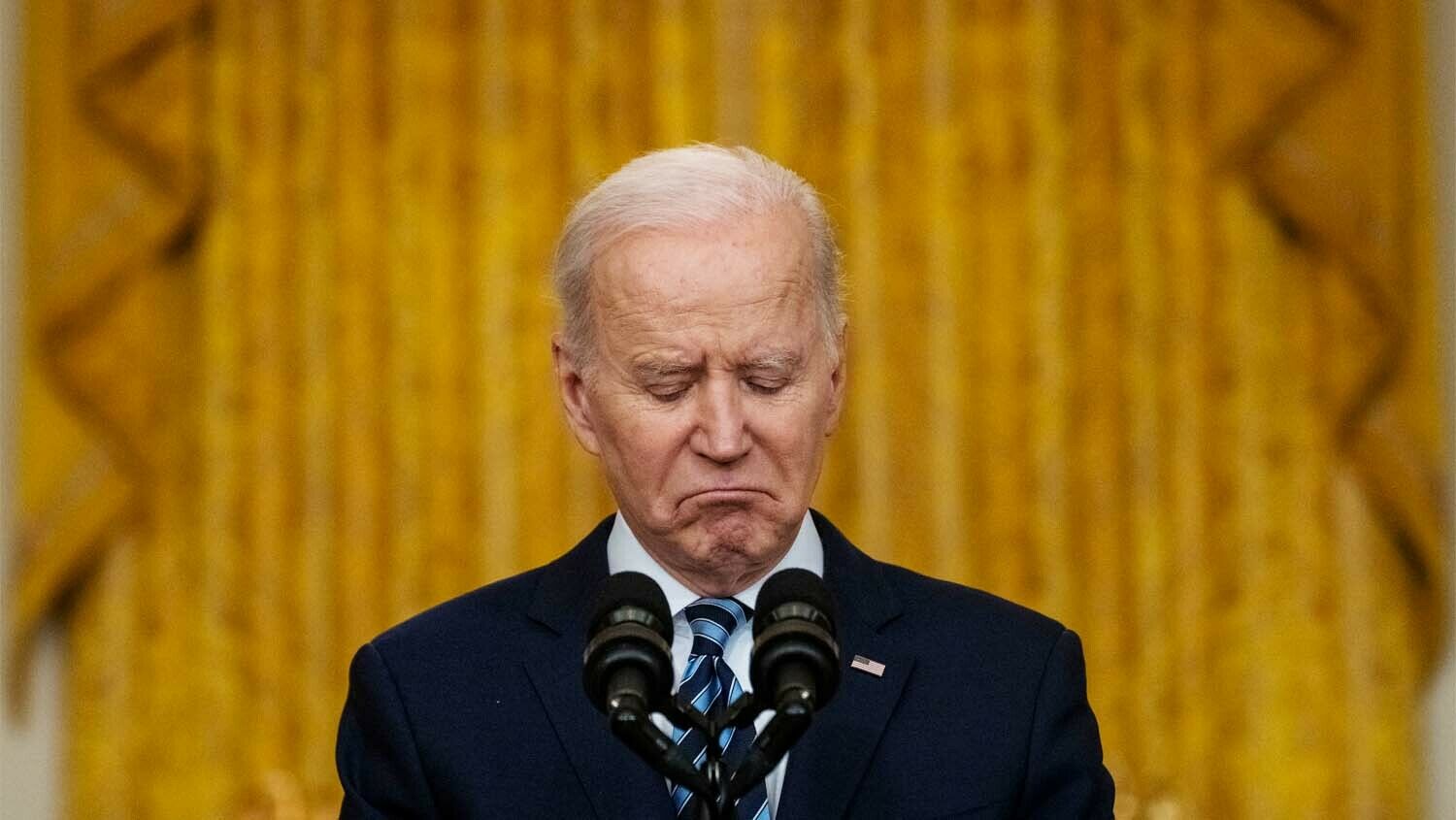 President Joe Biden takes questions after delivering remarks in the East Room of the White House, giving an update on the situation of Russia’s invasion of Ukraine on February 24.
Kent Nishimura / Los Angeles Times via Getty Images

There are no ‘mighty men’ in Washington to stand up to Russia.

March 12 will be the 75th anniversary of the start of the Cold War. United States President Harry S. Truman announced on March 12, 1947, that America would work to stop the spread of communism in Europe. This “Truman Doctrine” put America at direct odds with Joseph Stalin and the Soviet Union. This conflict didn’t end until the Soviet Union’s dissolution in 1991.

With Russian President Vladimir Putin’s invasion of Ukraine, media are saying this is the start of a new Cold War:

U.S. President Joe Biden has been in politics for awhile. He has been a senator since 1973—well into the Cold War. Before the current crisis erupted, many thought Biden would be well prepared to face off against Russia. A February 8 article in the Wall Street Journal called Biden “a president for the new Cold War.” The Journal labeled him “the right man for his times.” Ahead of Putin and Biden’s summit in Switzerland last year, Time magazine portrayed Biden as a “tough guy” ready to stand up to Putin.

Russia is not an easy country to deal with. America and Russia are the world’s two preeminent nuclear superpowers. Any escalation between the two powers has the potential to lead to nuclear war. Global Firepower ranks the U.S. and Russia as the world’s most and second-most powerful militaries, respectively. Even leaving the nuclear threat aside, a clash between Washington and Moscow could be cataclysmic.

This hasn’t stopped American presidents from confronting Moscow before.

How is Biden doing compared to his predecessors?

One of the first major clashes between America and the Soviet Union was the Berlin Blockade. After World War ii, the Allied powers (America, the Soviet Union, Britain and France) divided Germany into four zones of occupation. Berlin was located entirely within the Soviet occupation zone. But as Germany’s capital, the city was also divided into four occupation zones. The American, British and French sectors became an island in the middle of what the Soviets would turn into Communist East Germany.

Stalin didn’t like having a Western outpost in the middle of what he considered “his territory.” So on June 24, 1948, he implemented a blockade of West Berlin. The Soviets closed all roads, railways and waterways connecting West Berlin with Western Germany. West Berliners found themselves cut off from food, coal, medicine and other necessary supplies. Stalin was hoping to kick the Western allies out of West Berlin. He wanted all of Berlin—and the roughly 2.5 million residents in the western sectors—to himself.

What did President Truman do about it?

“We stay in Berlin, period,” he told cabinet members. “We are in Berlin by the terms of the agreement, and the Russians have no right to get us out by either direct or indirect pressure.”

On June 28, Truman authorized a full-scale airlift of goods into West Berlin. Military planes would fly over Soviet-controlled airspace to bring supplies into West Berlin. And they would do so as long as the Soviets continued the blockade. At one point, a plane landed every 45 seconds at Berlin’s Tempelhof Airport. At the end of the airlift in September 1949, American and British troops had delivered about 2,323,738 tons of food and other supplies to West Berlin.

David McCullough wrote in his biography Truman, “He was convinced that the future of Western Europe was at stake in Berlin.” The threat of war with the Soviet Union over the airlift was real. McCullough notes that the three Allied powers had about 6,500 troops in Berlin. The Soviets had 18,000, with 300,000 more in the rest of Eastern Germany. “If we wished to remain [in Berlin], we would have to make a show of strength,” wrote Truman. “But there was always the risk that Russian reaction might lead to war. We had to face the possibility that Russia might deliberately choose to make Berlin the pretext for war.”

The circumstances were different in 1948. America had only just begun to develop atomic bombs, and the Soviets didn’t have them yet. But President Truman was still willing to go to war with Stalin over Berlin. And Truman won the standoff.

The airlift showed Stalin that the West wouldn’t be bullied. A reciprocal blockade of East German exports was hurting the Russian sectors. Stalin ended his blockade in May 1949. West Berlin would remain free.

“[T]he Berlin Airlift was … one of the most brilliant American achievements of the postwar era,” McCullough writes. It was a massive success. It showed that Washington was willing to stand up to the world’s other superpower to protect Europe.

It is also worth noting that the Soviet Union wasn’t far from getting its own nuclear weapons. Even if a Soviet nuclear strike wasn’t feasible in 1948, it would be feasible in the near future. Yet Truman was willing to escalate circumstances against a budding nuclear superpower—all to protect Europe.

And this wasn’t the only victory against the Soviets America would have in the Cold War. The 1962 Cuban Missile Crisis is seen as the closest the two superpowers came to nuclear war. President John F. Kennedy led America to victory in stopping Moscow’s plans of holding the U.S. at nuclear gunpoint.

Harry Truman was a Democrat, as was John F. Kennedy. But we don’t see this kind of leadership from the Democrat in the White House today.

Putin’s invasion of Ukraine is impacting far more people than Stalin’s blockade did. This is a literal war in Europe. And America pledged to protect Ukraine from foreign attacks in the 1994 Budapest Memorandum. Many countries in Europe—including North Atlantic Treaty Organization allies—are wondering if they will be next.

What has Biden’s response so far been?

“You have two options,” Biden said in an interview published February 26. “Start a third world war; go to war with Russia physically. Or two, make sure that a country that acts so contrary to international law ends up paying a price of having done it.”

Biden’s main response so far is sanctions. Sanctions are a way of life for Putin. Every time he embarks on a new escapade—whether it’s the 2014 annexation of Crimea or the 2020 poisoning of opposition figure Alexei Navalny—new sanctions get slapped on prominent Russians or Russia as a whole. The latest sanctions may be bigger than previous ones, but they’re still nothing Moscow isn’t used to. Putin probably expected sanctions from Washington. Biden gave Putin a price he was willing to pay.

There would have been other ways for Biden to have hit back at Russia without starting World War iii. He could have sent nato troops into Georgia, another former Soviet state Putin is desperate to keep away from the West. He could have poked at Russia’s ally in Cuba. He could have done something that Putin hadn’t already factored into his plans. Perhaps some may see these as unnecessary provocations. But Putin’s track record shows he respects strength. Responding to what Foreign Policy calls “the West’s biggest test since World War ii” with financial penalties isn’t strength.

Biden himself admits that the sanctions were not designed to stop Putin. “No one expected the sanctions to prevent anything from happening,” he said on February 24. “This could take time and we have to show resolve.”

There are also plenty of caveats in Biden’s sanctions. The sanctions don’t cover Russia’s fossil fuel exports, despite fossil fuels being Russia’s most lucrative exports by far. In 2019, fossil fuels made up well over half of Russia’s export revenue. Many Russian oil and gas companies are state owned, so the export revenue goes to the Russian government. The fossil fuel industry is financing Putin’s army. Yet Biden declined to sanction that industry.

In a January 19 press conference, Biden even said he wouldn’t punish Russia severely if it led a “minor incursion” into Ukraine. Apparently, a full-on invasion counts as a minor incursion.

The Biden administration’s actions follow a long pattern of American weakness—going back to its disastrous withdrawal from Afghanistan last summer to President Barack Obama’s weak handling of Russia years earlier.

In all likelihood, Putin wouldn’t have launched the invasion if he thought Biden would have responded strongly.

America used to be called the “leader of the free world.” What happened to America’s leadership?

Late theologian Herbert W. Armstrong proved in his book The United States and Britain in Prophecy that the English-speaking peoples—including America—are descended from the lost tribes of Israel (request your free copy). God told the patriarch Abraham, forefather of the Israelites, that He would turn his descendants into “a great nation” (Genesis 12:2). God promised that “in blessing I will bless thee [Abraham], and in multiplying I will multiply thy seed as the stars of heaven” (Genesis 22:17). Through the Prophet Moses, God told the Israelites: “The Lord shall cause thine enemies that rise up against thee to be smitten before thy face: they shall come out against thee one way, and flee before thee seven ways” (Deuteronomy 28:7). Moses also wrote: “And five of you shall chase an hundred, and an hundred of you shall put ten thousand to flight …” (Leviticus 26:8).

Mr. Armstrong wrote: “[America’s enemies] were cut off from the beginning of God’s birthright blessings on America and Britain starting about 1803, through the First World War [and] the Second World War.” Although it wasn’t a war, you could add the Berlin airlift as a God-given victory.

But those victories are history.

Mr. Armstrong wrote that it all changed with “the turning point of the Korean War at the end of 1950. Since that time, however, these blessings are surely being taken away—and neither America nor Britain has come out on top in any major skirmish since that time!”

God promised blessings on America and Britain for obedience to His law. He also promised curses for disobedience. Mr. Armstrong based his analysis on prophecies about these curses. One of them is recorded in Leviticus 26:19, where God warns that He “will break the pride of your power.” America still has a lot of power. But it too afraid to use it. The Ukraine crisis demonstrates this.

While there hasn’t been a major military victory since 1950, God did give America victories not involving large-scale warfare. The Cuban Missile Crisis was one of these. But why don’t we have leaders like Harry Truman or John F. Kennedy in Washington today?

Here is another of these prophesied curses: “For, behold, the Lord, the Lord of hosts, doth take away from Jerusalem and from Judah … The mighty man, and the man of war, the judge, and the prophet, and the prudent, and the ancient, The captain of fifty, and the honourable man, and the counsellor, and the cunning artificer, and the eloquent orator. And I will give children to be their princes, and babes shall rule over them” (Isaiah 3:1-4). God promised to take away strong leadership. This perfectly describes America today. Joe Biden’s handling of the Ukraine crisis is a fulfillment of this prophecy.

There is much more in the Bible about modern America than most realize. As the prophecies in Isaiah and Leviticus show, there is a lot of bad news for America in the short term. But there is also much hope that you’ll need to weather the chaos in Ukraine and the events to follow. To learn more, please request a free copy of The United States and Britain in Prophecy. Also please read our Trends article “Why the Trumpet Watches America Has Won Its Last War” to learn more about where America’s modern history fits in with Bible prophecy.