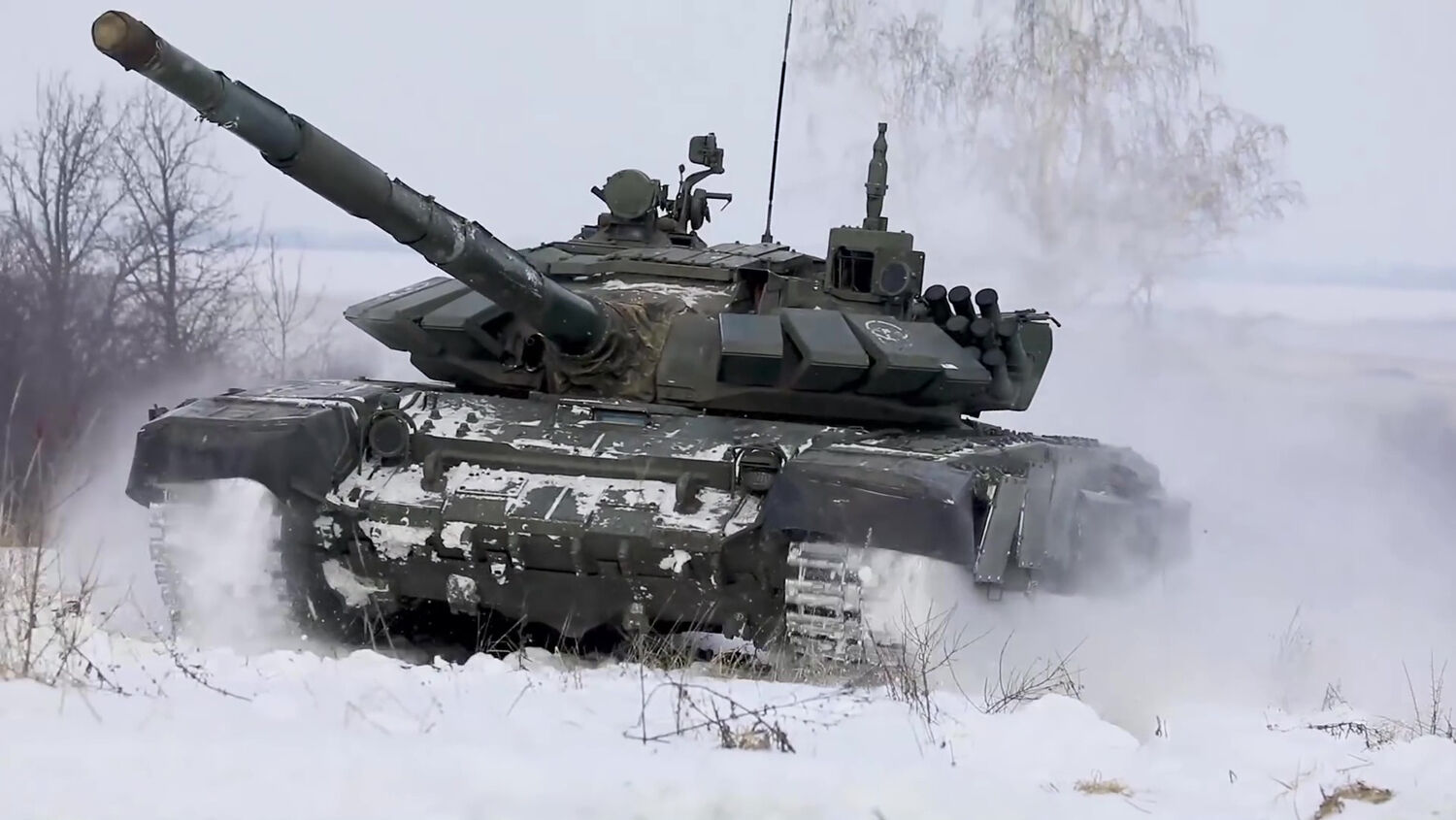 The Russian strongman takes a swipe at the United States-led global order.

The deployment came after a ferocious 40-minute speech in which Putin rejected the notion of a sovereign Ukraine and unilaterally recognized the independence of Donetsk and Luhansk. These regions are ethnically Russian and have been under de facto Russian control since shortly after Putin forcibly annexed Crimea from Ukraine in 2014. But Putin had refrained, until now, from formally recognizing them as independent.

Putin called his decision to officially recognize the regions “long overdue” and warned of “bloodshed” if Ukrainian leaders don’t “immediately stop combat activity” aimed at governing them. In one segment of his speech, he labeled Soviet ideals “odious,” but elsewhere made a veiled threat against Ukrainians who had toppled statues of the Soviet Union’s founder, Vladimir Lenin. “Do you want decommunization? Well we’re fine with that,” he said. “But there is no need, as they say, to stop halfway. We are ready to show you what real decommunization means for Ukraine.”

It is unclear whether the deployment will remain limited to Donetsk and Luhansk, or if it signals the start of a long-feared, major Russian invasion of Ukraine. A Kyiv-based analyst told the Trumpet on February 22 that the move so far doesn’t change the facts on the ground. “They’ve been there since 2014, albeit unofficially,” he said. “Let the Russians send in their ‘peacekeepers.’” For now we should “keep calm and let the Russians invade themselves.”

But though it occurred in a region that was already under practical Russian control, international law still defines it as an invasion. And it was condemned by officials from multiple countries at an emergency meeting of the United Nations Security Council as a violation of both Ukraine’s sovereignty and international law. “He calls them peacekeepers,” said Linda Thomas-Greenfield, the United States ambassador to the UN. “This is nonsense. We know what they really are.”

In 2008, after Putin invaded his first former Soviet nation, Georgia, Trumpet editor in chief Gerald Flurry said it was the start of a “dangerous new era” for the world. He wrote: “This was the first military strike of a rising Asian superpower—and there will be more!”

Mr. Flurry even pinpointed which nation Putin would target next: “Will a crisis occur over Ukraine? That area is the breadbasket of Russia, and surely it is willing to wage war over that as well.”

Six years later, that proved accurate when Putin seized Crimea and plunged Donestk and Luhansk into a state of frozen conflict that has claimed 12,000 lives so far. With Russian forces now deployed into these regions, the attack could grow far more explosive and reach into other Ukrainian regions.

Time has proved Mr. Flurry was right when he said Putin’s 2008 strike on Georgia was only the start, and that Ukraine would be next. He accurately forecast Putin’s ongoing dominance of former Soviet nations because Bible prophecy teaches about an Asian alliance that will form in the years ahead.

Around the year a.d. 90, the Apostle John prophesied of a future conflict involving an enormous force: “And the number of the army of the horsemen were two hundred thousand thousand” (Revelation 9:16). This military of 200 million troops will be about 15 times larger than any army ever assembled in mankind’s bloodstained history.

Scripture provides several key details about this force. Revelation 16:12 calls it “the kings of the east,” showing it to be a group of mainly Asian countries. Ezekiel 38 and 39 state that it will be led by the “prince of Rosh, Meshech, and Tubal” (Young’s Literal Translation). Meshech and Tubal are ancient names of the modern cities of Moscow in Russia’s west and Tobolsk toward the east. Rosh is a variation of an ancient name for Russia, as shown in the Jamieson, Fausset and Brown Commentary and other Bible aids.

In his 2017 booklet The Prophesied ‘Prince of Russia,’ Mr. Flurry asserts that the “prince” prophesied in these passages is Vladimir Putin and writes: “The use of all three names [Russia, Moscow and Tobolsk] shows that this is an individual ruler of all the peoples of Russia, from the west to the east. The reference to the cities of Moscow and Tobolsk helps us see how vast Russian territory is in these latter days. This giant swath of land indicates the prince will probably conquer more nations of the former Soviet Union.”

In the years since that was written, Putin has asserted more and more power over several former Soviet nations. His deployment of forces into Ukraine is a major victory in that strategy.

Mr. Flurry explains that Putin’s leadership of Russia, including his conquests over former Soviet states, shows that a major world conflict is fast approaching. But he emphasizes that there is also tremendous hope tied intimately to these developments. To understand the big picture of Russia’s rise and the great hope that is tied to it, order your free copy of The Prophesied ‘Prince of Russia.’