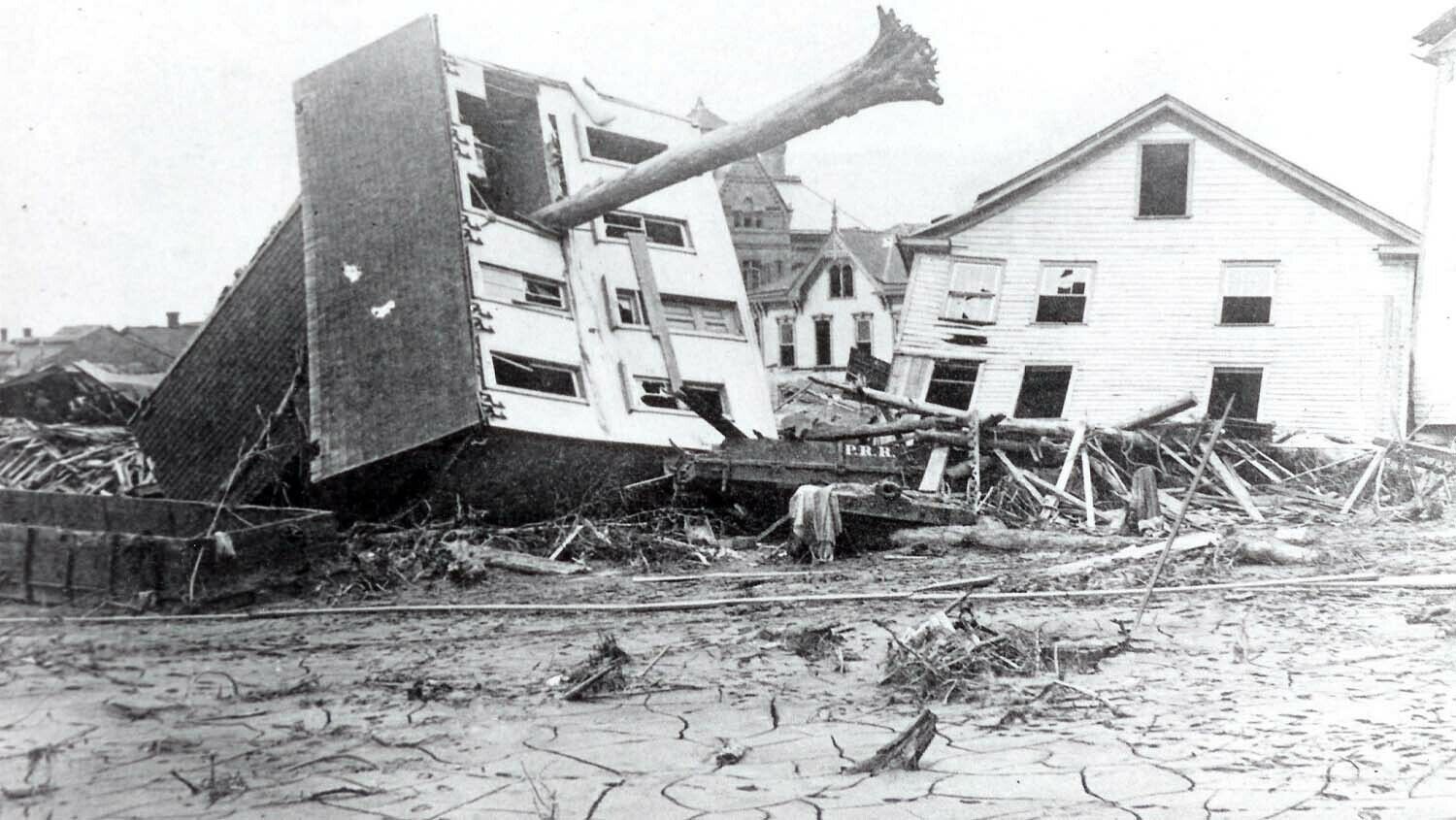 Devastation from the Johnston flood of 1889
not identified, Public domain, via Wikimedia Commons

In 1889, Johnstown was a prosperous coal and steel town—unknowingly about to be leveled by a monster wall of water like something out of a disaster movie.

It had been built in the mountains of western Pennsylvania by a group of filthy rich industrialists who sought a retreat from the city, and it had a population of about 30,000 who enjoyed the beautiful surroundings and, a short drive to the north, a serene lake.

The lake was a reservoir formed by a dam on the Conemaugh River. It had been built well but maintained poorly. Its owner had sold its three cast iron discharge pipes for scrap. It sprang occasional leaks. Sometimes word spread that the dam was going to break, but oops—false alarms. The leaks were patched with mud and straw. One heavy storm caused a particularly large void. Years later it was finally repaired, not by engineers but by a railroad construction gang.

One day in late May, a storm poured as much as 10 inches of rain on Johnstown in 24 hours. Men saw the lake nearly cresting the dam and frantically tried to clear blocked spillways, then tried to dig a new one to relieve some of the pressure. Their efforts failed. A man rode on horseback to the telegraph office to send warnings to South Fork, near the dam, and to Johnstown a few miles farther downstream. But they were considered another false alarm. Evacuations were not ordered.

Twenty million tons of water barreled down Little Conemaugh River. South Fork residents heard the thunder approaching. Most scampered to high ground, but four people were killed. The flood devoured 60 more feet of riverbed per second and crested at 40 feet high. It slammed into Johnstown, destroying and carrying away trees, rocks, telephone poles railroad cars, businesses, houses and people. Within 10 minutes, the city was drowned. About 2,200 people died.

People had been confident, busy, trusting of their leaders, fine with patching problems, numb to warnings, and enjoying life as if it would carry on forever. Meanwhile, 20 million tons of tragedy were building.

You are in a similar situation. The dam of modern civilization is furrowed with cracks. The storm is pouring down and growing in intensity. Those who know current events and history see that something catastrophic is building. The reality that something powerful and evil is happening to our societies has become inescapable.

And the Bible is transmitting serious warnings! God has prophesied that a flood of violence, brutality, barbarism and destruction is coming, and He is warning us through, as Isaiah 40 describes it, “the voice.”

But the great majority of people are busy, self-confident, fine with patching problems, and numb to warnings.

If God were trying to reach you, would you recognize it?

In 1 Kings 19, God caused the Prophet Elijah to witness a mighty wind, a great earthquake and a blazing fire. Yet instead of speaking through those things, He spoke through “a still small voice.”

That is how God is speaking right now. Amid all the distraction and commotion is a “still small voice,” warning you from God.

Amid hundreds of television channels available 24 hours a day, seven days a week, there is a voice speaking on Sunday mornings on The Key of David, with Gerald Flurry. Among the thousands of radio stations filling the airwaves, there is KPCG. Among hundreds of millions of websites, there is theTrumpet.com.

Can you recognize the voice speaking for God within the cacophony?

History is, as Winston Churchill wrote, a “long, dismal catalog of the fruitlessness of experience and the confirmed unteachability of mankind.” Human nature is hard. We will fight furiously to avoid admitting that we are wrong. We will vigorously resist the need to change our attitudes and actions.

Jesus Christ called us out for this self-destructive tendency. “[B]ehold, I send unto you prophets, and wise men, and scribes,” He said, “and some of them ye shall kill and crucify; and some of them shall ye scourge in your synagogues, and persecute them from city to city: That upon you may come all the righteous blood shed upon the earth, from the blood of righteous Abel unto the blood of Zacharias son of Barachias, whom ye slew …” (Matthew 23:34-35). That is what Jesus told even those who were religious. “Verily I say unto you, All these things shall come upon this generation. [T]hou that killest the prophets, and stonest them which are sent unto thee, how often would I have gathered thy children together, even as a hen gathereth her chickens under her wings, and ye would not! Behold, your house is left unto you desolate” (verses 36-38).

Not long after He issued that warning, people killed Him. He was warning, showing people where they were wrong, telling them to change the things that were leading to destruction. And rather than repent, they persecuted, tortured and murdered Him.

If people are committing rebellion and sin, which destroys them and others, God warns them. But if they don’t listen to His correction, what is God to do?

At this moment in humanity’s dismal catalog, we are suffering a virus, viral government oppression, crippling political turmoil, economic tremors, social division, family breakdown, the prospect of war and worse. The Bible warning is going out, through one voice. But people as a whole are not coming any closer to repentance. Instead, they think they can solve the problems and can continue entrenching themselves in their sins.

After Christ gave that warning, His disciples came and asked Him, “What shall be the sign of your coming, and of the end of the world?” (see Matthew 24, Mark 13 and Luke 21). He answered that world conditions would worsen, with wars, rumors of wars, nations rising up against each other, diseases breaking out, and even earthquakes in various places. Then He said, “All these are the beginning of sorrows” (Matthew 24:8).

These terrible events are actually warnings of worse to come! Christ explained how conditions will continue to intensify until there “shall be great tribulation, such as was not since the beginning of the world to this time, no, nor ever shall be. And except those days should be shortened, there should no flesh be saved: but for the elect’s sake those days shall be shortened” (verses 21-22).

So Jesus Himself warned about a period of calamity and suffering unprecedented in the bloodstained annals of human history. This period will mark the end of the world as we know it: It will immediately precede the Second Coming of Jesus Christ to establish His Kingdom on Earth.

Christ was affirming what several Old Testament prophets had foretold. The Prophet Daniel wrote that in the end time, mankind would suffer “a time of trouble, such as never was since there was a nation.” The Prophet Jeremiah wrote, “Alas! for that day is great, so that none is like it: it is even the time of Jacob’s trouble.” Jacob is the forefather of the modern nations of America, Britain, Israel and other related nations.

This is describing a time of the worst suffering in human history! And if you look at the conditions prophesied to lead up to that, you can see that we are very close to that time. The dam is breaking. And people are ignoring the warning.

The answer is revealed in the book of Revelation. There the Apostle John describes the events that close the age of man in terms of Jesus Christ opening a book sealed with seven seals. As each seal is loosed, a catastrophic event occurs. The first four are often referred to as the four horsemen of the apocalypse. They represent the destructive power of false religion, war, famine and pestilence (Revelation 6:1-8). The fifth seal represents the 2½-year “great tribulation,” a time of unprecedented suffering, worldwide (verses 9-11). This will be followed by the “day of the Lord,” a one-year period of even more grievous plagues and curses, each signaled by a trumpet blast (Revelation 8-9; 11:15-19). God will justly judge this world for its evil. These prophecies show just how angry God really is at the evils and injustices in this world! This is the God of judgment!

But God’s goal in punishing is never vindictive—it is always corrective. He seeks to bring as many people to repentance as possible (2 Peter 3:9).

The only reason all the horrors of the Tribulation and Day of the Lord are necessary is that mankind is so hard—so uncorrectable. The fact is, God does not punish any harder than He has to!

God gives these warnings well in advance, if only men would heed.

Revelation 9:18 reveals that in the final savage war between the sprawling armies of Europe and Asia, one third of mankind remaining will be slaughtered! That’s over a billion people! Yet still, people will not repent! (verse 20-21).

What does it take for God to reach people? This shows just how adamant and stubborn is human nature!

And you and I have the same human nature. We must fight it and be sure we are responding to God’s correction!

The final chapters of Revelation portray an extraordinary picture of God’s final dramatic intervention in world affairs, and how God is going to force man to acknowledge what a failure he has been in governing himself, how much misery and injustice and bloodshed he has caused. And even if they never repent, God will ensure this world is cleansed of its filth! Revelation 16 records the seven last plagues God sends.

And there is this lightning-bolt statement in Revelation 18:4, directed at you and all who are willing to hear God’s warning: “And I heard another voice from heaven, saying, Come out of her, my people, that ye be not partakers of her sins, and that ye receive not of her plagues.“

These horrifying plagues are coming—but God gives us the way to avoid them: Come out of this world now! Listen to God today! Let God reach you. Repent now! Apply God’s correction while He gives it to you through a still, small voice. Let God purge the sins in your life now.

The truly beautiful thing is that all these nightmarish events lead to the most important event in history: the return of Jesus Christ. “And then shall appear the sign of the Son of man in heaven: and then shall all the tribes of the earth mourn, and they shall see the Son of man coming in the clouds of heaven with power and great glory” (Matthew 24:30).

This event is almost here! And if you let God reach you today, you will be there to help Him bring this world the justice and peace it sorely needs.

If you would like to take the next step in responding to God’s warning, request our free booklet How to Be an Overcomer.